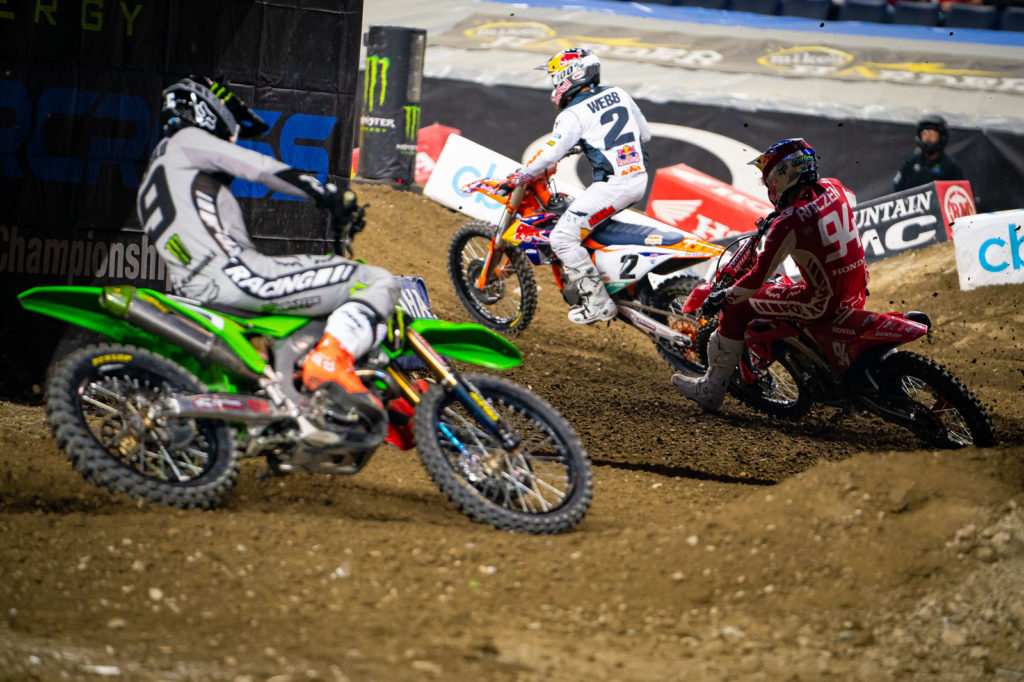 Feld Entertainment has released another batch of details for the 2022 Monster Energy Supercross Championship, a 17-race run around the United States scheduled to start in January. As we’ve mentioned in previous articles, this year’s planned route is a “return to normal” for SX. The series begins in Southern California, will have races occurring on Saturdays only, and is set to visit venues in fifteen regions of the country. Of course, this tour won’t be without its challenges or restrictions, something we covered at length yesterday, but the series organizers at Feld and the race officials at the AMA are committed to running the complete plan while bringing back popular competitive elements that have been absent during the pandemic.

In addition to the race dates, Feld Entertainment outlined the sale dates for tickets to each round, which begins will a pre-sale program that will run through October 11 and then transitions to general sales for the public on October 12.

Below are the complete details for the professional series, but there were another of important announcements for amateur competitors, including details for the revamped Supercross Futures AMA National Championship and dates for the KTM Junior Supercross Challenge. We’ll have those posted on-site shortly.

Feld Entertainment, Inc. announced today that tickets are on sale for all 17 rounds of the 2022 Monster Energy AMA Supercross season. Pre-sale begins today at 10 a.m. ET for preferred customers and will run through next Monday, October 11. Tickets will then become available to the public starting on Tuesday, October 12 at 10 a.m. ET and then 10 a.m. in each subsequent time zone. Fans can sign up for preferred access or make ticket purchases online at SupercrossLIVE.com.

The 17-race schedule returns to its traditional weekend routing format as the series visits 15 cities spread across 13 states including California, Colorado, Massachusetts, Michigan and
Washington.

Storylines abound for the 2022 Supercross season as the 450SX Class continues to feature what has become an ever-expanding, deep array of talent. Three Supercross champions will be competing for another title – 2x champion Cooper Webb, 2020 champion Eli Tomac and 2018 champion Jason Anderson as both a domestic and international “who’s who” list of competitors vie for their first title – Ken Roczen (Germany), Marvin Musquin (France), Dylan Ferrandis (France), Adam Cianciarulo, Justin Barcia, Aaron Plessinger, Malcolm Stewart and Chase Sexton, all from America.

The first of three Triple Crown events will take place on Saturday, February 5 at State Farm Stadium in Glendale, Ariz., followed by rounds 8 and 13 on Saturday, February 26 at AT&T Stadium in Arlington, Texas and Saturday, April 9 at the Dome at America’s Center in St. Louis, Mo. The Triple Crown, three-race format is a break from the traditional one Main Event race format and has become a fan favorite since its inception in 2018.

The Dave Coombs Sr. East/West Showdown races will be held on Saturday, April 16 at Atlanta
Motor Speedway in Hampton, Ga. (Round 14) and Saturday, May 7 at Rice-Eccles Stadium in Salt Lake City, Utah (Round 17).

Monster Energy Supercross, The Official Video game 4, released last Spring featured a new track editor feature where gamers can create their own in-game track designs. Milestone, the video game maker, ran a global contest from April through June where the winning prize was to bring one virtual track design to life during the 2022 championship. Round 11 in Indianapolis will be inspired by the winning design from the video game track editor contest.

FanFest is currently planned for all rounds except Minneapolis, Minn. (Round 7) and Detroit, Mich. (Round 10). The expansive outside footprint will feature the race team rigs, Monster Energy exhibitions, sponsor displays, photo opportunity set ups, food and beverages, plus the red-carpet styled Ride of Fame.

As the pandemic recovery progresses, Supercross is monitoring changes to government mandates, public health guidelines and industry standards and is working closely with our venue partners to adjust protocols for the safety and wellness of guests based on state and local requirements. Please monitor the venue website for health and safety policies, including face covering and entry requirements, which are subject to change.