The 13th round of the FIM Motocross World Championship has concluded in sunny Loket, with Monster Energy Yamaha Factory Racing teams celebrating a successful weekend with Grand Prix victories from Jeremy Seewer and Jago Geerts.

Thousands of fans, which included those from Czech Republic, Switzerland and Slovenia, among others, made the trip to Loket and lined the edges of the circuit as they cheered on their heroes, making for a loud and colourful display throughout the weekend.

It was a big weekend for Yamaha as they went on to win all of the races, with Thibault Benistant and Jeremy Seewer winning the first races in MXGP and MX2, while Jago Geerts and Maxime Renaux were victorious in races two. Additionally, Geerts went on to claim the red plate in MX2 and now leads the championship by eight points over Red Bull KTM Factory Racing’s Tom Vialle.

A couple of main competitors were missing from the grid, as Honda114 Motorsports’ Ruben Fernandez did not line up after a big crash in practice, and Kawasaki Racing Team MXGP’s Romain Febvre made the decision to sit out MXGP race two, due to illness. 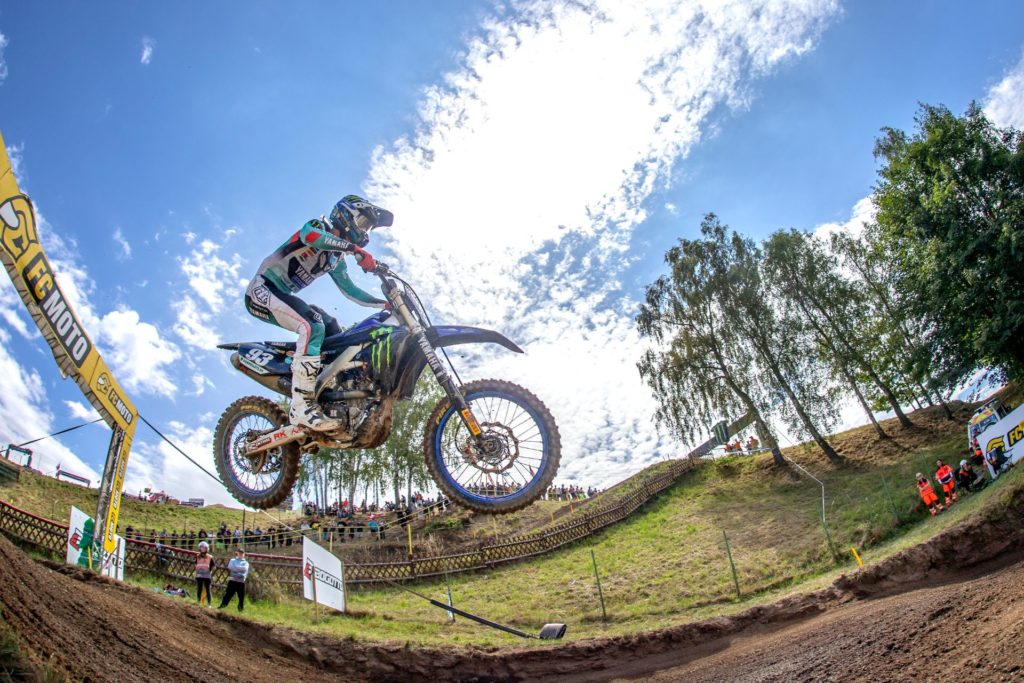 Ship to Cycle Honda SR Motoblouz rider Stephen Rubini had a good opening lap as he made some nice passes to land himself in third as Geerts dropped back to fourth, while Vialle was up to seventh.

Benistant had the constant pressure of Längenfelder and despite setting some fast laps, could not shake the German. Further behind, Geerts battled with Rubini and finally after seven laps, he was able to make the pass stick.

Big Van World MTX Kawasaki’s Mikkel Haarup was the next rider to push Vialle further down the order, as the Frenchman found himself down in 10th by lap 9. Haarup was able to get around Adamo soon after that.

In the end, Benistant was the race winner, Längenfelder crossed the line in second, while Geerts ended his lonely ride in third ahead of Rubini and de Wolf. Vialle finished 10th. 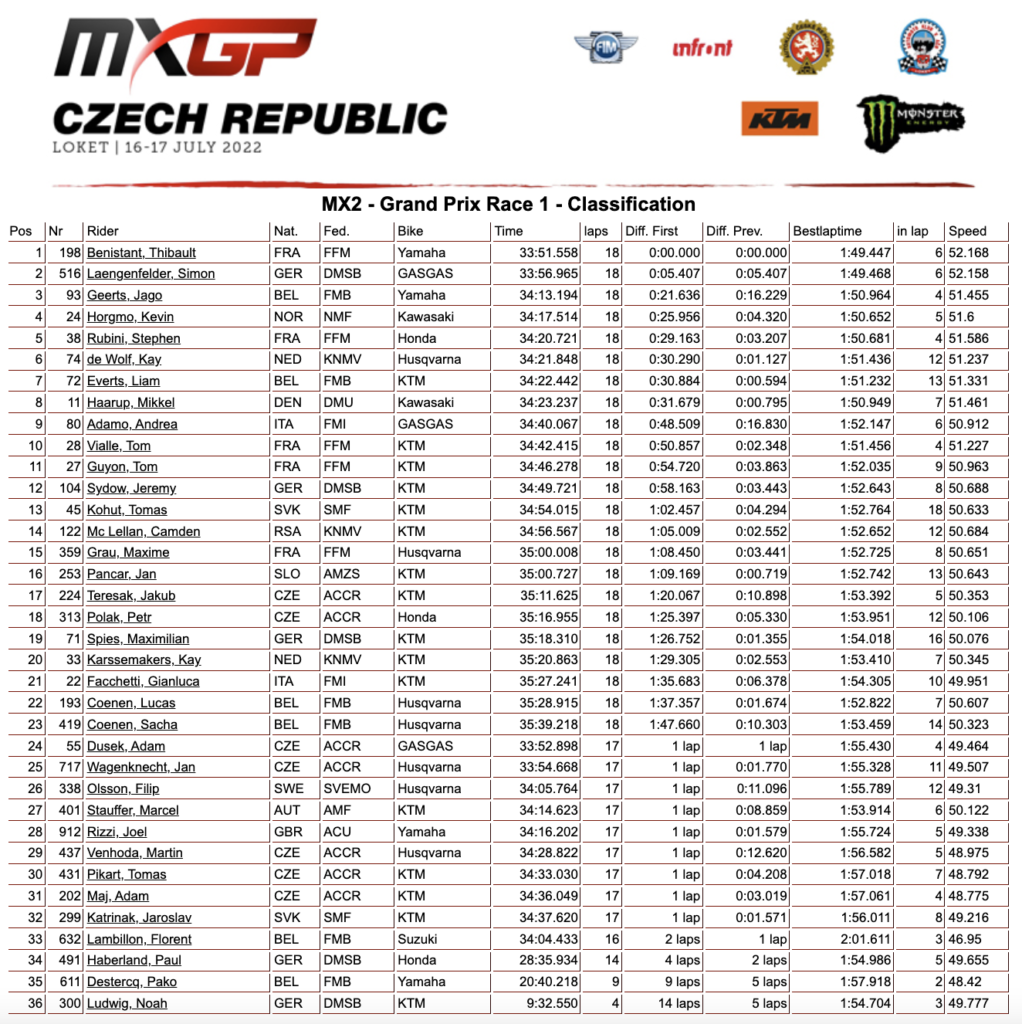 In race two, it was Geerts with the Fox Holeshot that time around with Vialle, Längenfelder just behind. It did not take long for Vialle to find his way into the lead as he passed Geerts and took control by the end of the first lap.

Once again, F&H Kawasaki Racing’s Kevin Horgmo and Rubini started well in fourth and fifth, though Rubini was caught by Benistant who was looking to make his way up the order after a poor start.

de Wolf meanwhile made up two spots after he got around Jeremy Sydow of Raths Motorsports and Tomas Kohut of Osicka MX Team for eighth.

Vialle and Geerts maintained a steady gap that was less than two seconds for much of the race, until lap 10, when Vialle made a mistake and went off the track, which allowed Geerts into the lead.

Benistant then caught Horgmo and passed him for third, while Jan Pancar of TEM JP253 had a very good race in sixth after passing de Wolf in the early stages of the race.

Geerts went on to win the race, Vialle finished second ahead of Benistant and Horgmo. 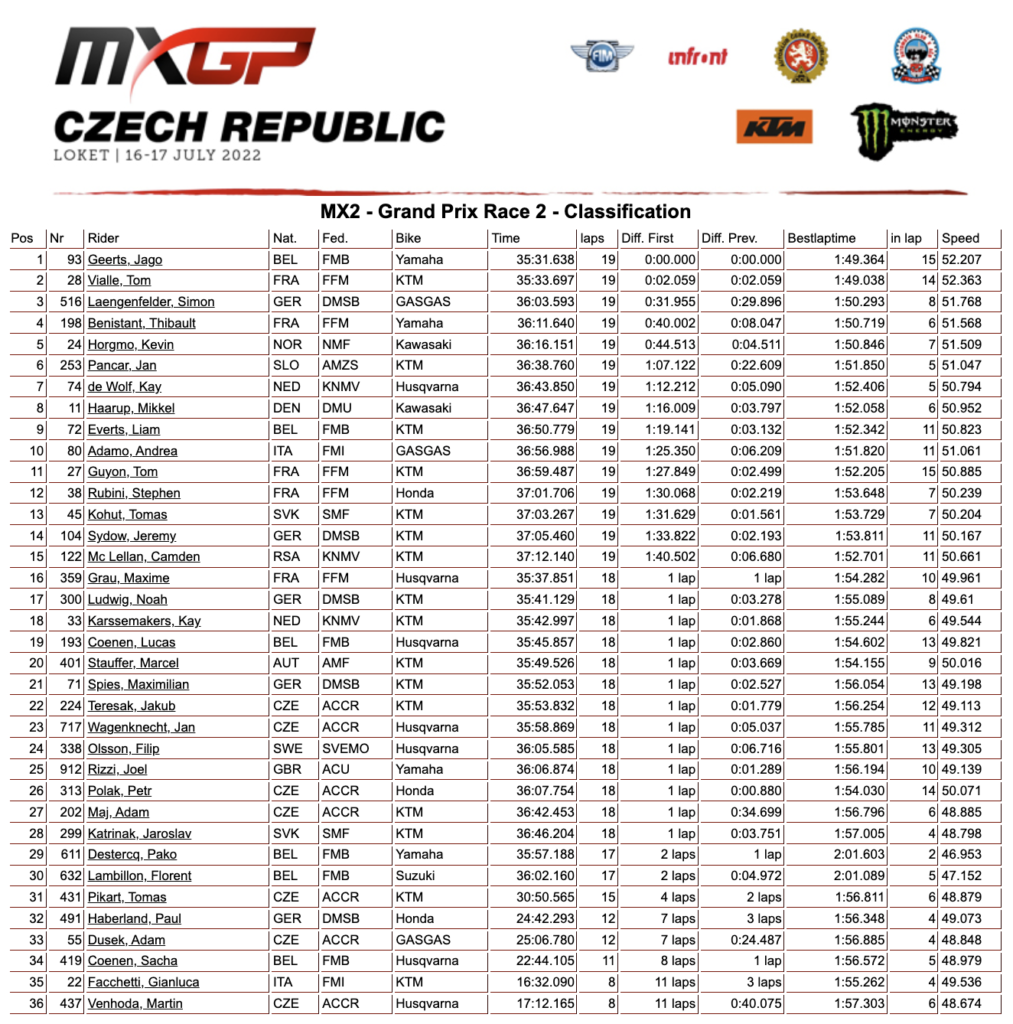 A 2-1 result gave Geerts the overall win over his teammate Benistant who finished second, while Längenfelder celebrated his fourth podium of the season.

With Vialle finishing 10th in race one and behind Geerts in race two, this meant that for the eighth time this season we saw the red plate change hands as Geerts now leads the MX2 Championship by eighth points, while Längenfelder remains third.

Jago Geerts: “I’m happy for sure. In the first heat, I didn’t have the best start and I was struggling a bit with the track, but then for the second race, I made a small change on the bike, and I took the Fox Holeshot, so I was happy with that. Then in the first lap I made a mistake and Tom passed me, but after that I felt strong on the bike and good on the track, so after like 15 minutes I passed Tom and then pushed until the end and won the race. I’m really happy with that and I’ve also got the championship lead back, so it will be nice to ride with the red plate in Lommel next week”.

Thibault Benistant: “Yes, of course I wanted that win in the second race, but the guys are fast also. I didn’t get a bad start but touched with other riders in the first corner and then I was fired up to push and comeback. But I was struggling with the track a little bit and I made myself tired trying to push to pass Kevin. I made the pass and gave it everything I had. I’m a little disappointed but it’s good to finish second”.

Simon Längenfelder: “It was a good weekend! I was consistent and had two good starts. They were not perfect, but definitely good. I was feeling like I could make a pass for the lead in race one, but he just did not make any mistakes. 2-3 for third overall is quite good! I took a lot of points too. Now we are looking forward to the sand next weekend.” 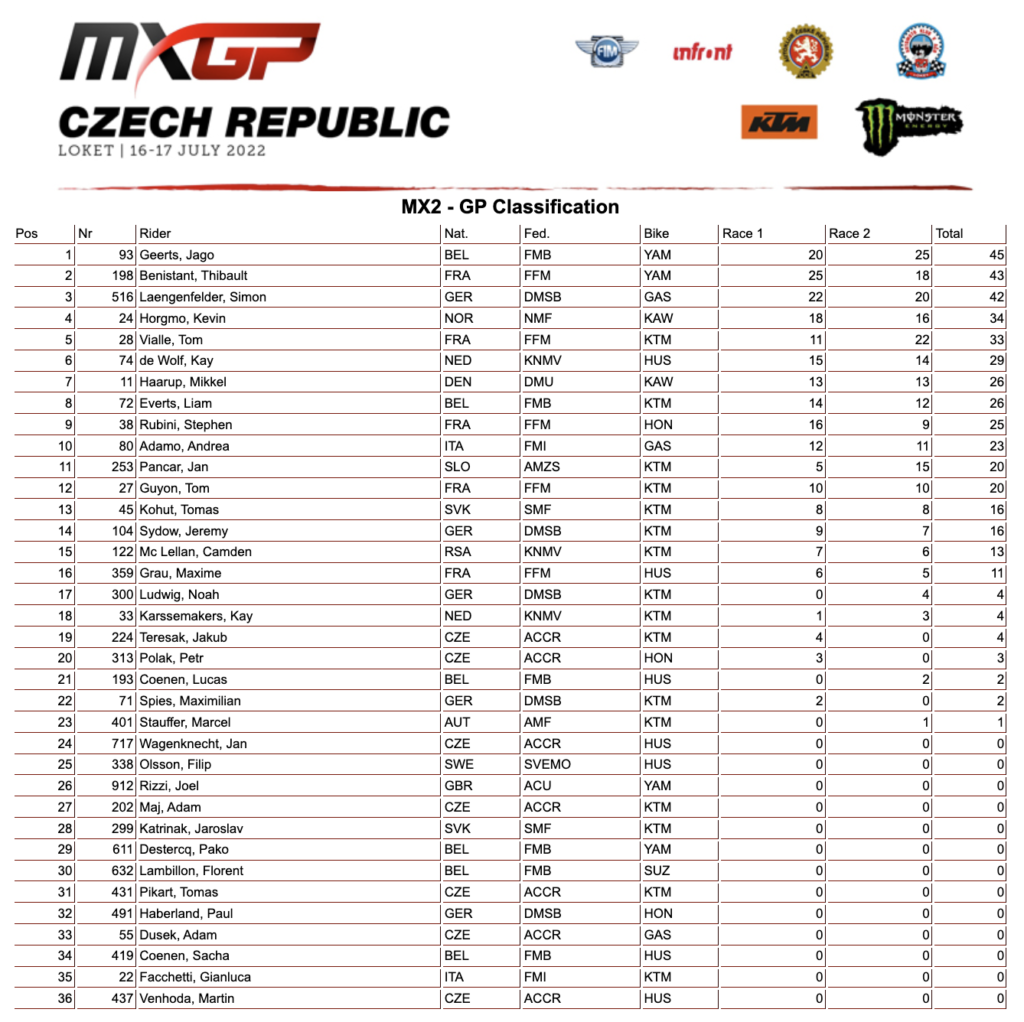 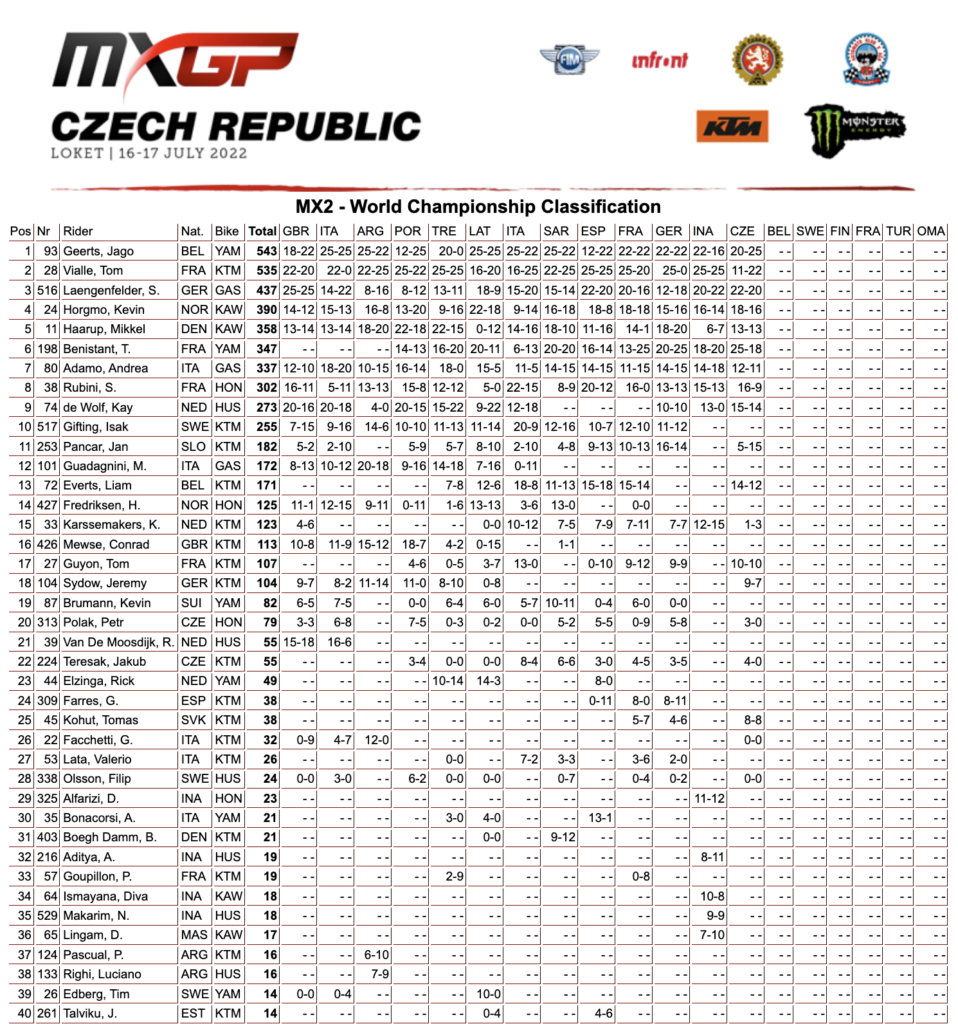 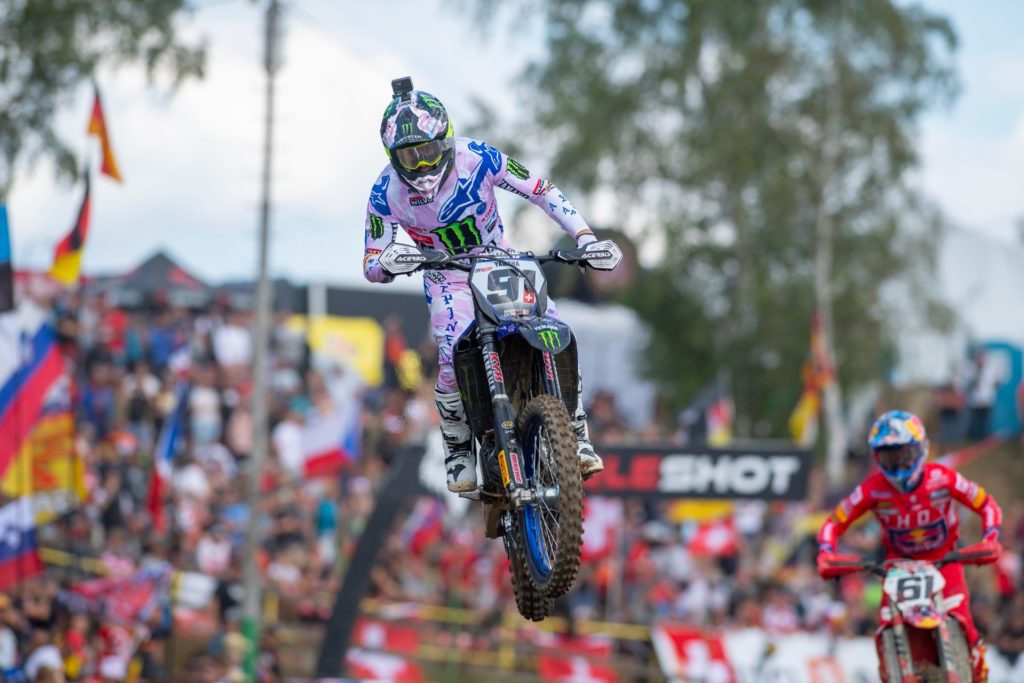 Seewer then closed in on Prado and Gajser and took second from the Slovenian on the third lap. Gajser looked to respond but could not get the drive. The Swiss then set the fastest lap of the race as he began applying the pressure onto Prado. It took him just three laps to pass him.

Gajser was also improving his pace as he looked to stay with the leaders. The Slovenian managed to pass Prado on lap 10 and focused his attention on Seewer in first place.

For Prado, this was just the beginning as Renaux began to close in. Prado held third place for just a lap before being passed by the Frenchman and by the end of the race was also caught by Monster Energy Yamaha Factory Racing’s Glenn Coldenhoff.

F&H Kawasaki Racing Team’s Jed Beaton was forced out of the race as a result of a broken wheel.

In the end, Seewer was able to gold off Gajser and win his third race of the 2022 season. Gajser was second ahead of Renaux, Coldenhoff and Prado. 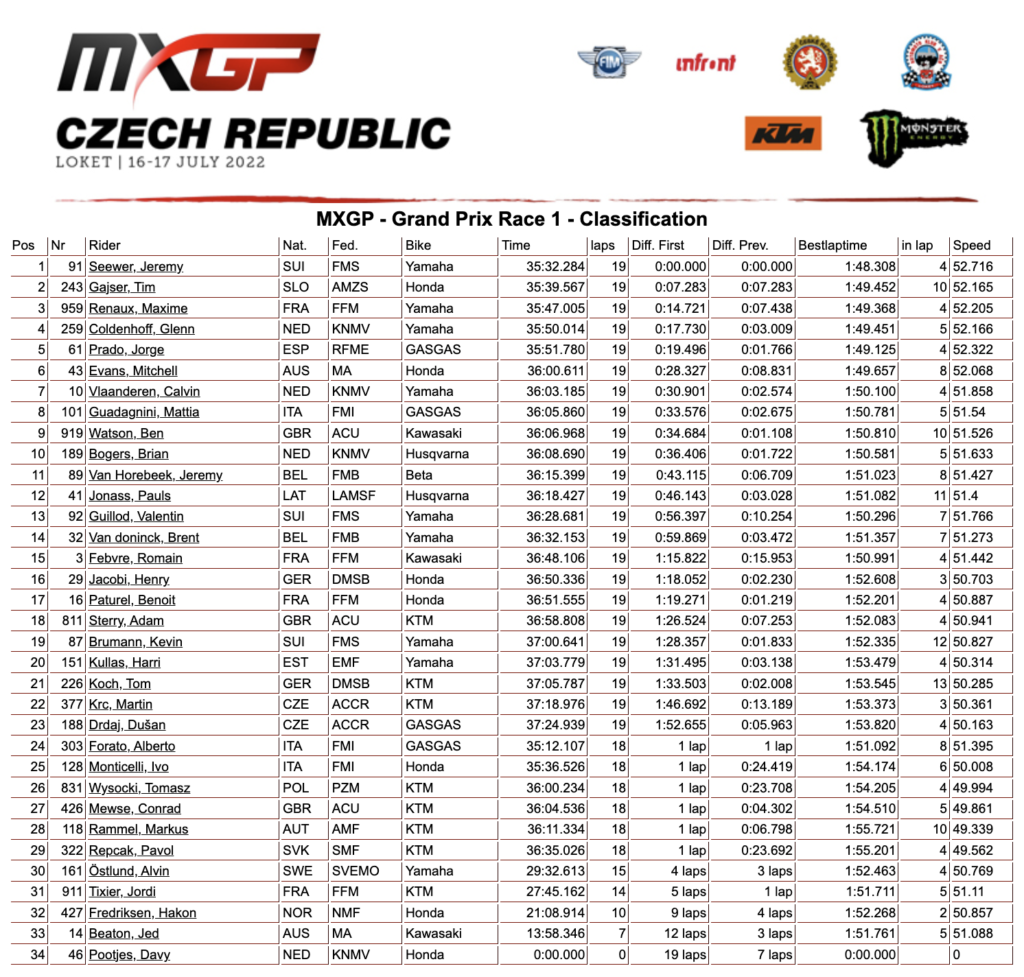 A 1-2 result gave Seewer his second Grand Prix win of the season, as Renaux made one epic come back from injury with second overall, his sixth podium of the year, ahead of Gajser who was third.

Gajser continues to lead the MXGP standings with a 125-point advantage over Seewer, while Prado remains third ahead of Renaux who is fourth.

Jeremy Seewer: “It’s incredible to win this one, even though I could have gone 1-1, but I just made one mistake in the opening lap where Maxime got me. He was riding really well and I tried to catch him. I was a bit quicker, but I couldn’t make it happen. I took the GP win, which is amazing. I’m not giving up yet, I will try to fight for as many points as possible and we have a few GP’s to go, so let’s see where we get and I will try to win some more”.

Maxime Renaux: “Yeah, it was amazing. You know, coming back after such an injury wasn’t an easy one. I already wanted to ride in Indonesia, to save as many points as possible, but it was not possible, the back was still not stable enough. But I made some really big steps with the physio to be able to come back in such a good shape. So yeah, it’s just amazing. I couldn’t dream of a better GP, you know, having a race win and being second on the podium. I’m just super grateful because it could have been much worse and I’m still not done for the championship. So we still keep this in mind and try to go to the end of the season like this would be amazing”.

Tim Gajser: “It was a solid day. If I’m honest, I was kind of struggling on track today in both races and I even got a little bit of arm pump, so yeah, I was not riding like myself really. But anyway, Jeremy and Maxime were faster today but I’m happy to be on the podium in front of so many Slovenian fans. Now we go to Lommel, I like that track so I’m looking forward to it”. 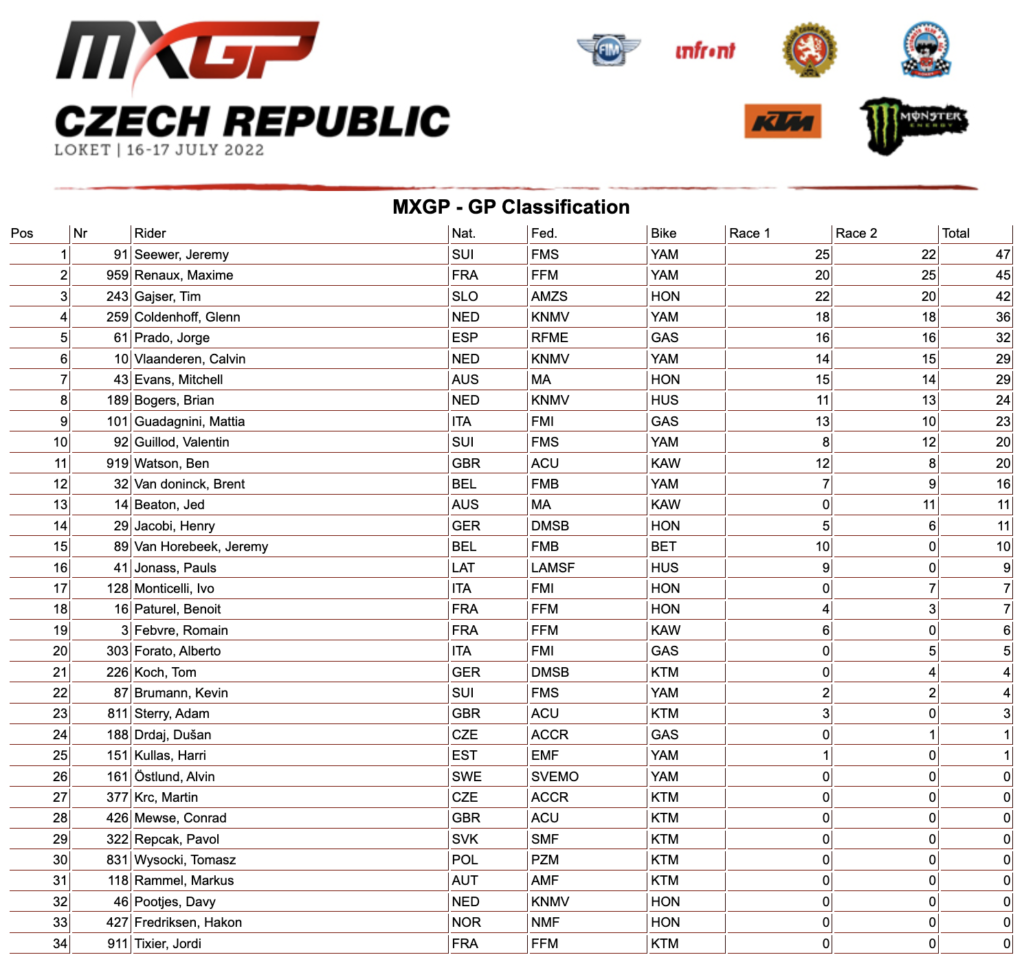 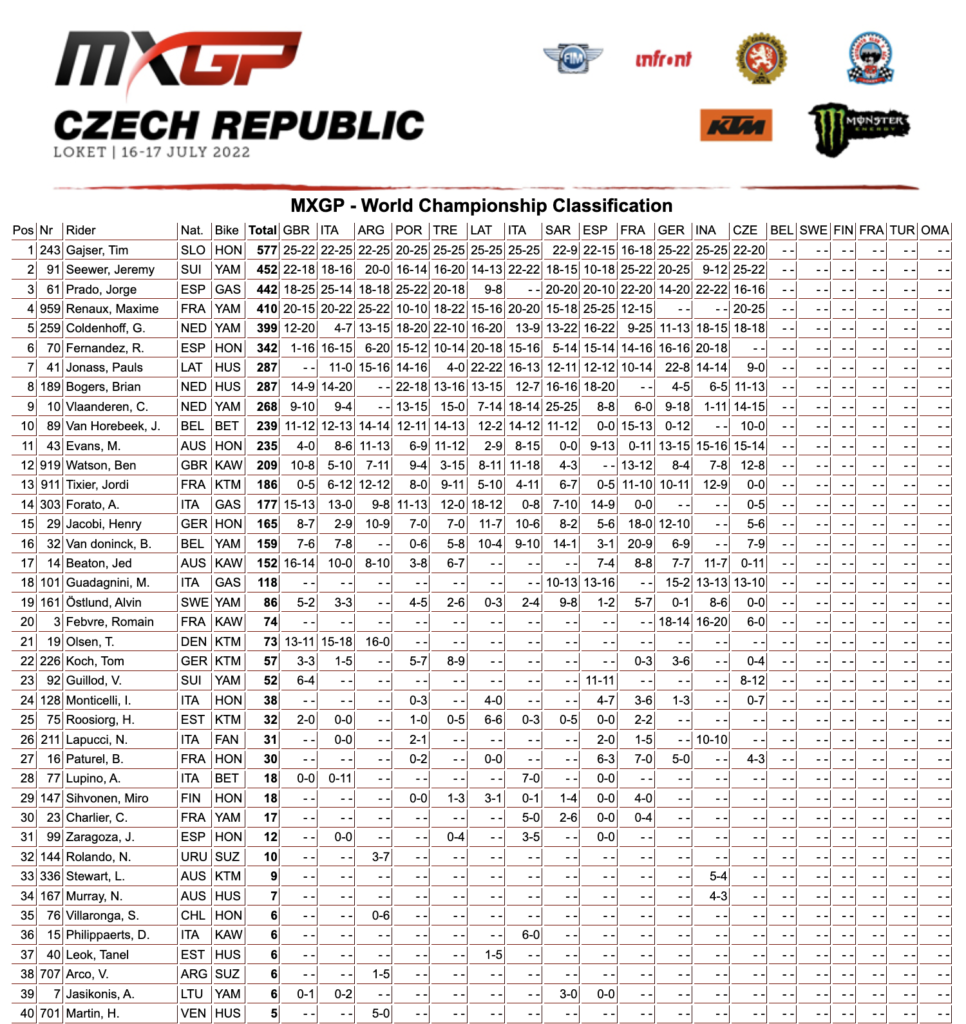