CHECK OUT OUR COMPLETE COVERAGE OF THE 2022 MXGP OF FRANCE

Qualifying day of the Monster Energy MXGP of France proved to be a good one for German’s Henry Jacobi of JM Honda Racing and Simon Längenfelder of Red Bull GasGas Factory Racing who topped the qualifying in MXGP and MX2.

Despite moments of heavy rain, the riders battled on and gave the fans a preview of what can be expected for tomorrow’s races. 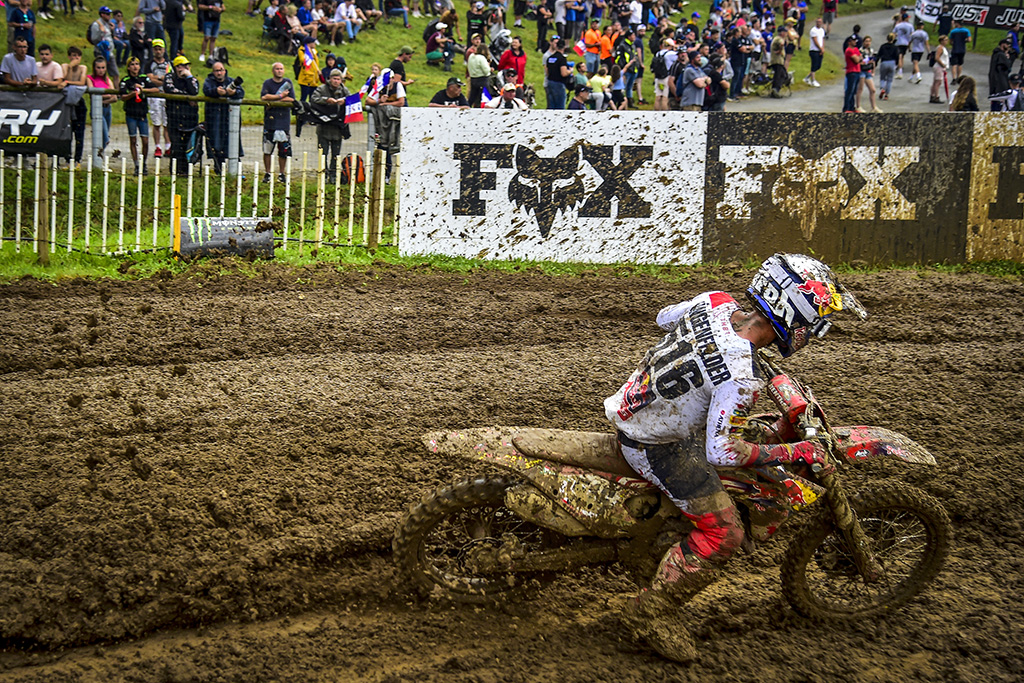 Meanwhile, Monster Energy Yamaha Factory Racing’s Jago Geerts had trouble in the start as he, along with a few other riders, crashed in the first turn. Geerts did not carry on with the race but there are no details on whether he was hurt as a result of the incident.

Back at the front, Längenfelder had clear track as he led the way ahead of Vialle who managed to get himself into second ahead of Benistant. Vialle set the fastest lap of the race as he looked to close in on the leader, though Längenfelder was able to stay mistake free and in control as he battled the muddy conditions.

Längenfelder extended his gap over the course of the following laps which made it impossible for the rest of the field to catch him and in the end, he went on to secure his second qualifying in MX2 this season. Vialle finished second ahead of Benistant, Horgmo and Rubini, as Everts dropped back to sixth.

Simon Längenfelder: “It was a good race. I had a good start and was lucky to be out in front from the beginning, it made the race a lot easier I would say. We are lucky that we didn’t have rain [during the race] and the track was muddy, but it was ok. I could hold on to first place and get a nice gap in the end and could ride it to the finish”. 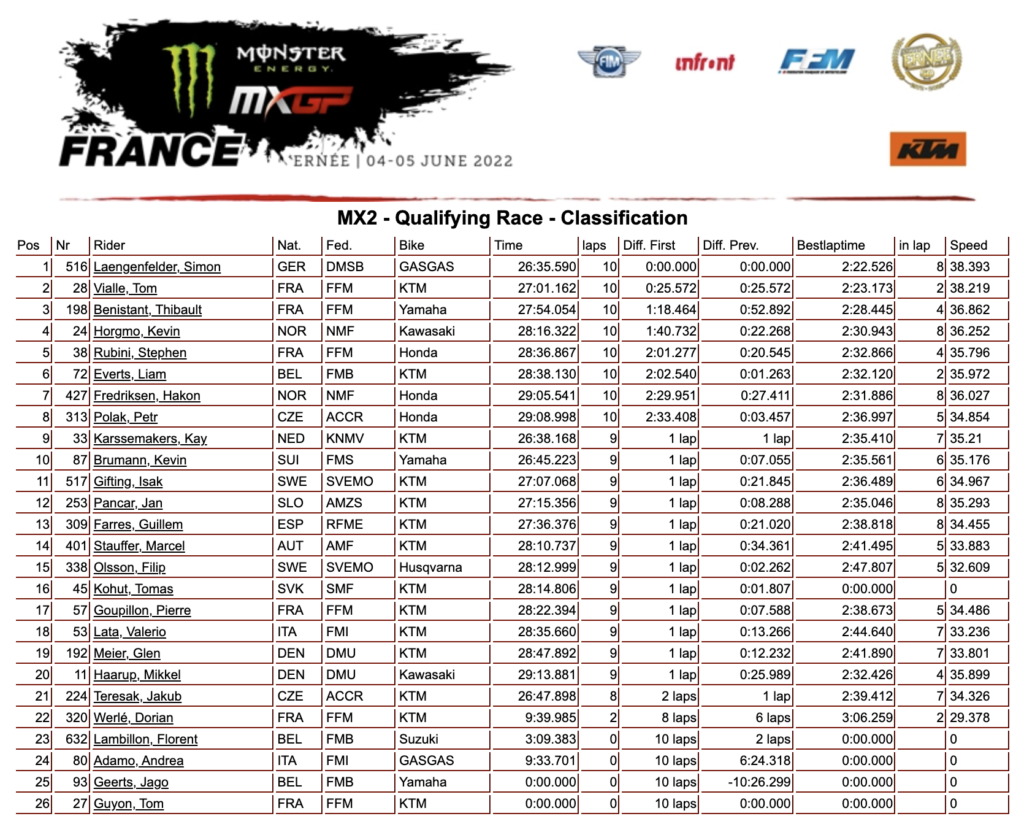 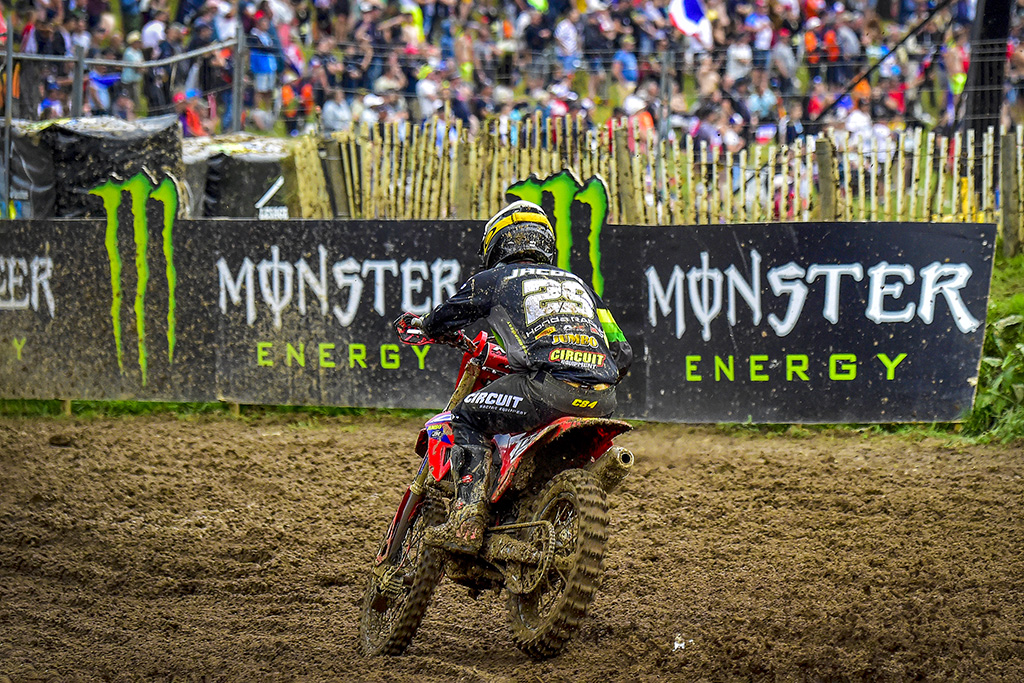 Jacobi was not wasting precious time, as he took over the lead early on, while Renaux slipped back to fifth, which allowed Standing Construct Husqvarna Factory Racing’s Brian Bogers and Beta SDM Corse’s Jeremy Van Horebeek into third and fourth.

Renaux made a mistake, as Jacobi stretched his lead to 8.834 seconds, while Van Horebeek and Benoit Paturel of Ship to Cycle Honda SR Motoblouz moved up to third and fourth.

Further down the order, Kawasaki Racing Team MXGP’s Ben Watson got passed by F&H Kawasaki Racing’s Jed Beaton. The Aussie eventually finished in 9th, while Watson did not finish the heat.

At the halfway stage, Renaux was looking to fight back as he got around Paturel and set his sights on Van Horebeek. The two came together as Renaux looked for a way to pass, which resulted in the Frenchman going down.

The race leader, Jacobi also ran into some trouble of his own as he tipped over in the closing stages, though with a lead of more than 30 seconds was safe and managed to bring it home in P1. He was victorious ahead of Van Horebeek, Brent Van doninck of Riley Racing while Renaux finished fourth ahead of Paturel.

Henry Jacobi: “I got a good start and then I thought it was not too difficult actually, and maybe I was the only one that saw everything good because I was first after half a lap. You had to be careful on some parts and I tried to manage the race. I was also a bit surprised after halfway when I saw on my pit board that I had such a big gap, but I was just enjoying being up front, because I’m not used to it”. 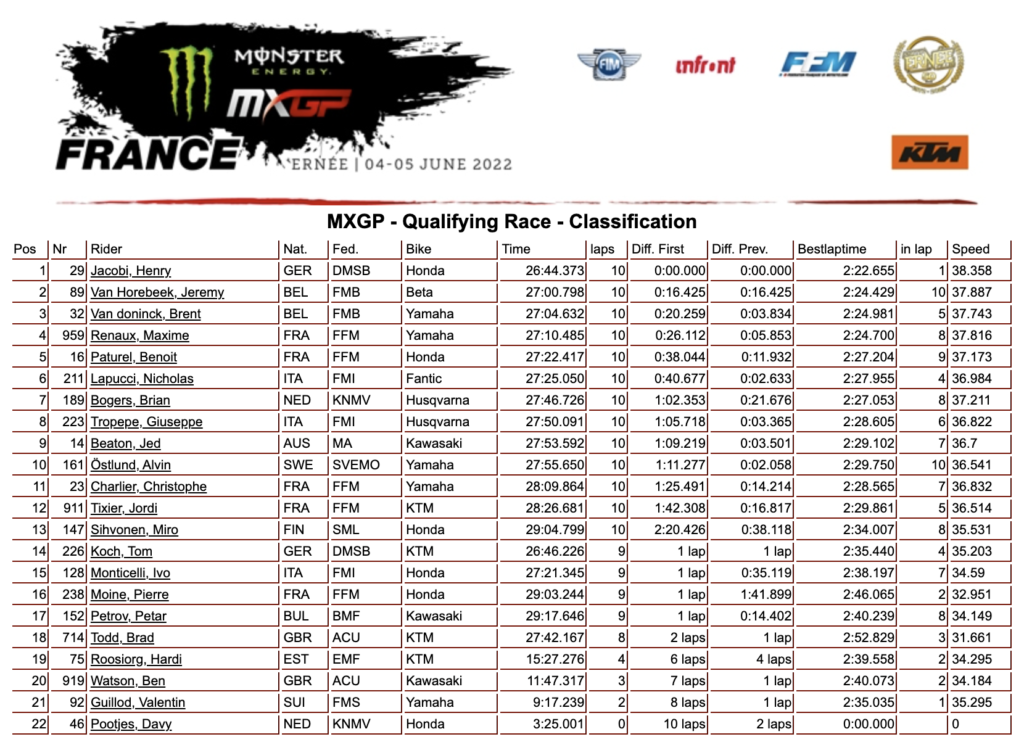