CHECK OUT OUR COMPLETE COVERAGE OF THE 2022 MXGP OF GERMANY

Round 11 of the FIM Motocross World Championship saw many celebrations as Team HRC’s Tim Gajser finally bounced back with the overall victory at the Liqui Moly MXGP of Germany, while in MX2, Monster Energy Yamaha Factory Racing’s Thibault Benistant made his way to the top step of the podium for the first time in MX2!

And that was not all, as Monster Energy Yamaha Factory Racing MX2 also celebrated a 1-2 on the box as Jago Geerts finished second and as Red Bull KTM Factory Racing’s Tom Vialle suffered a problem with his bike in the second heat, this also mean that Geerts took back the red plate. 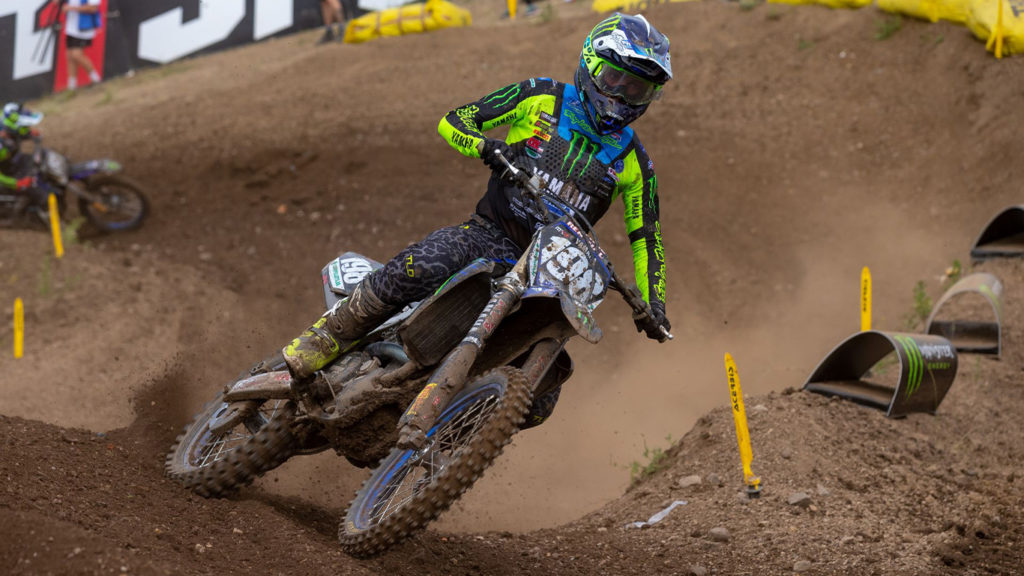 Nestaan Husqvarna Factory Racing’s Kay de Wolf went down in the start and was left with a lot of work to do as he started from the back of the field.

Benistant was pushing for the lead but briefly went off track, though managed to not to lose any positions. Geerts meanwhile began to push Pancar for the pass and shortly after, the Belgian was up to third.

Längenfelder then dropped back to fifth, as Big Van World MTX Kawasaki’s Mikkel Haarup caught onto the rear wheel of the German and began applying pressure. He made the pass and then also got around Pancar several laps later for fourth.

Vialle meanwhile was looking comfortable as he set the fastest lap of the race. This was quickly followed by a quick lap by Geerts who was looking to not to lose track of his championship, though he struggled to get around his teammate who was holding him up from getting to Vialle.

It took Geerts nine laps to pass Benistant and when he did that he was able to get his head down and focus on Vialle. He was able to take the gap down and in the final stages of the race we watched the pair battle it out for the win.

In the end, Vialle was able to keep calm and bring the win home in the opening heat, Geerts finished second ahead of Benistant, Haarup and Pancar. 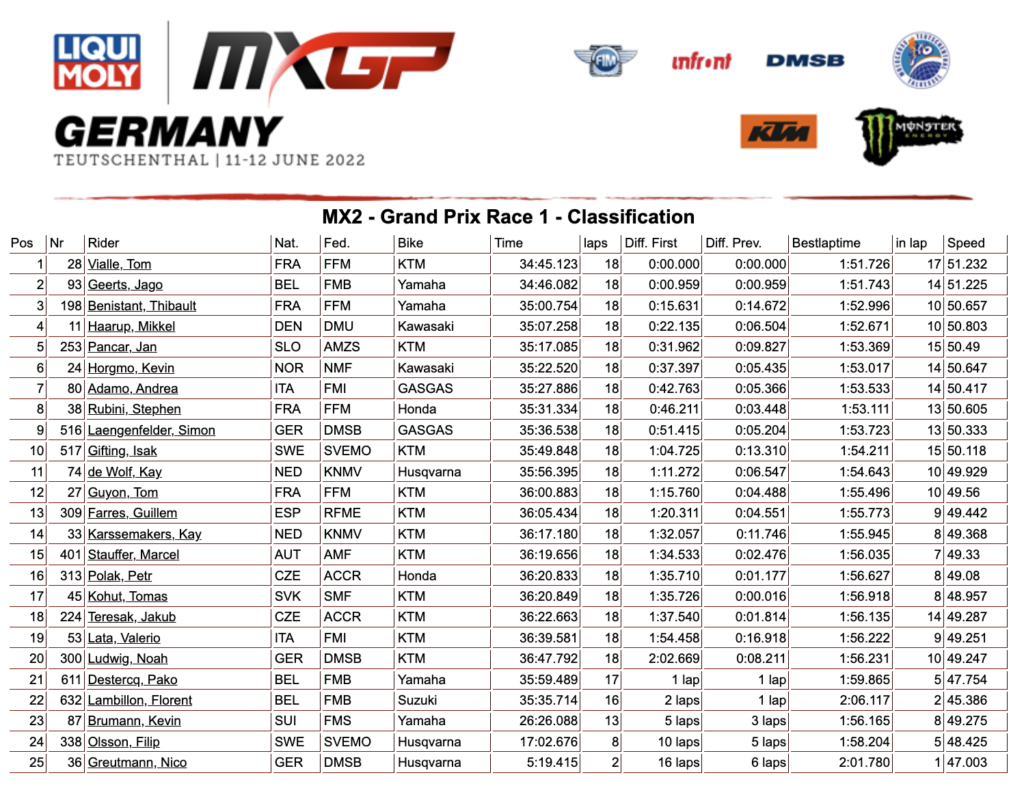 In race two, it was again Vialle who got the Fox Holeshot, but moments later Benistant was the leading rider as he made a quick move on the factory KTM rider. SM Action Racing Team YUASA Battery’s Andrea Adamo was next ahead of Geerts and Längenfelder.

Haarup made an early pass on Längenfelder for fifth, as Pancar faded to ninth after being got by F&H Kawasaki Racing’s Kevin Horgmo and de Wolf.

Geerts got around Adamo, and so did Längenfelder, as de Wolf dropped back to 11th,

While it looked like we had a French battle at the front on our hands, the race took a dramatic turn as Vialle stalled the bike and could not get it fired up again. After several tries, the Frenchman accepted defeated and walked back to the paddock. It was a costly moment for Vialle who lost the championship lead as a result.

At that point Benistant had clear track and was pulling away from his teammate. He was looking fast as he set several fastest laps of the race.

In the end, Benistant took the win ahead of Geerts, Haarup, Längenfelder and Horgmo.

A 2-1 result gave Benistant his first overall of the season, as Geerts settled for second ahead of Haarup who made his return to the box for the first time since Trentino. 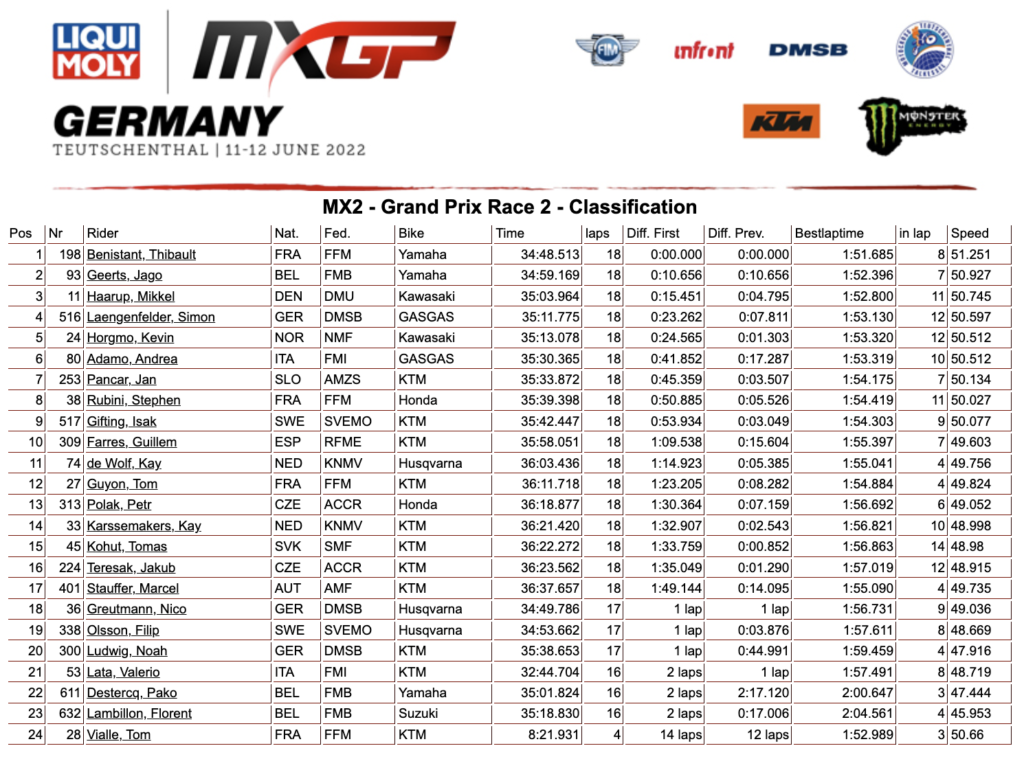 A DNF for Vialle in race two hands Geerts the championship lead. The Belgian now has a 12-point lead over Vialle as Längenfelder remains third.

Thibault Benistant: “I was happy to know that I was the winner this weekend. We have been working for this for a long time and I knew that I could win some races and even some GP’s, but we just had to wait and finally it happened so I’m happy with that”.

Jago Geerts: “I’m quite happy about the weekend with the two second places. It was a solid weekend. I didn’t feel great on the track, it was a bit sketchy, and I didn’t really have a good rhythm all weekend. So, I was a bit surprised about the first heat that I had really good speed and could almost win the race. Second heat, I didn’t really feel comfortable, so I rode my own pace and didn’t take too many risks. I saw Tom next to the track, so I knew I had the red plate back but that didn’t matter that much, I didn’t feel great, and I just came home in second”

Mikkel Haarup: “I enjoyed the whole weekend. I had a lot of people come from Denmark to see me riding, so it was also nice for them as well to get the podium. Overall, it was a great weekend, I had some good passes and didn’t have the best starts, but we did manage to improve it from the last couple of weekends, which I think gave me the podium. I’m happy with my riding but there’s still a lot of things to improve. Try to catch up with the guys in front of me but wasn’t able really to get close enough. But it was great. I had a lot of fun. And I’m looking forward to Indonesia”. 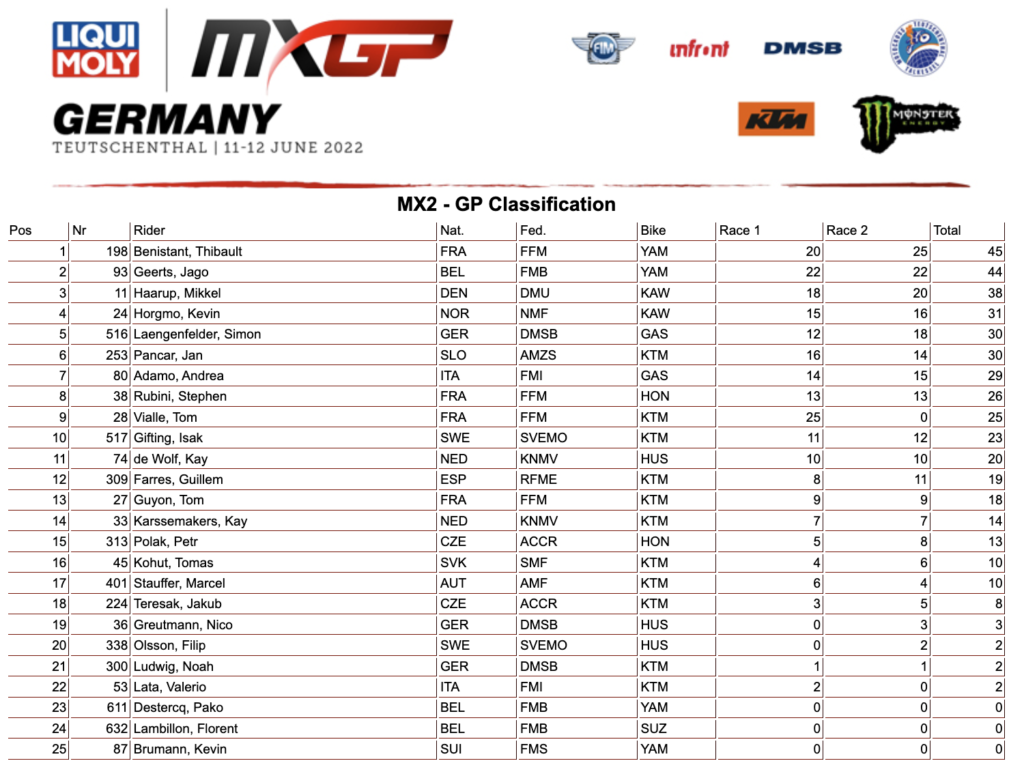 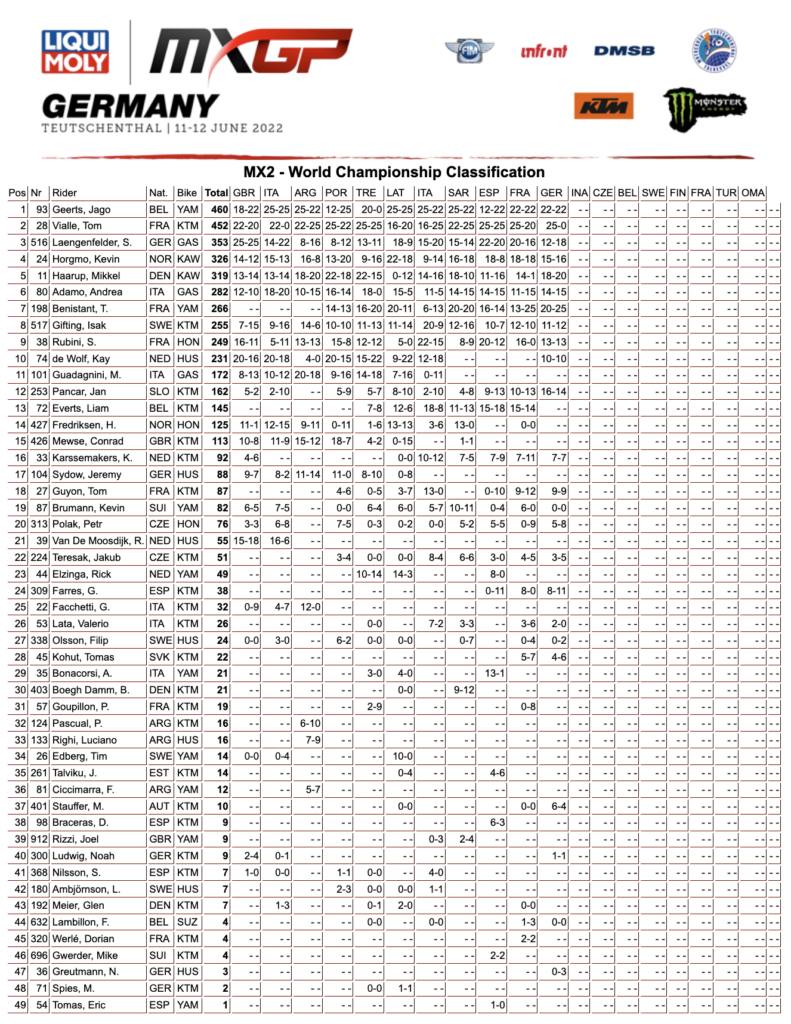 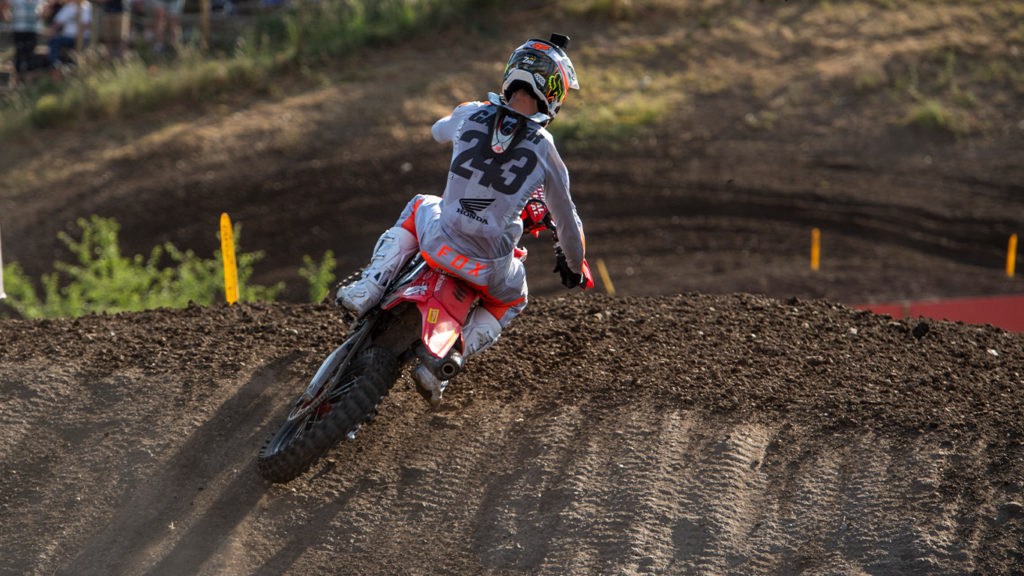 Early on, Seewer began to push Febvre for third. It took the Swiss two laps, but he was able to make the pass happen.

Prado briefly took fifth from Guadagnini who immediately fought back, but eventually by the end of the lap Prado was able to secure the position from his teammate. Once the Spaniard got by the Italian, he set his sights on Febvre who was just ahead.

Gajser led the way and was looking solid as he also set the fastest lap of the race. While he was looking to run away with it, Seewer began to close in on Jonass who was second.

Meanwhile Prado continued to push Febvre, though made a mistake himself and crashed on lap 12. He got going again in seventh just behind Guadagnini and Honda 114 Motorsports’ Ruben Fernandez.

There was no change inside the top for the next several laps as Gajser went on to win the race ahead of Jonass and Seewer. 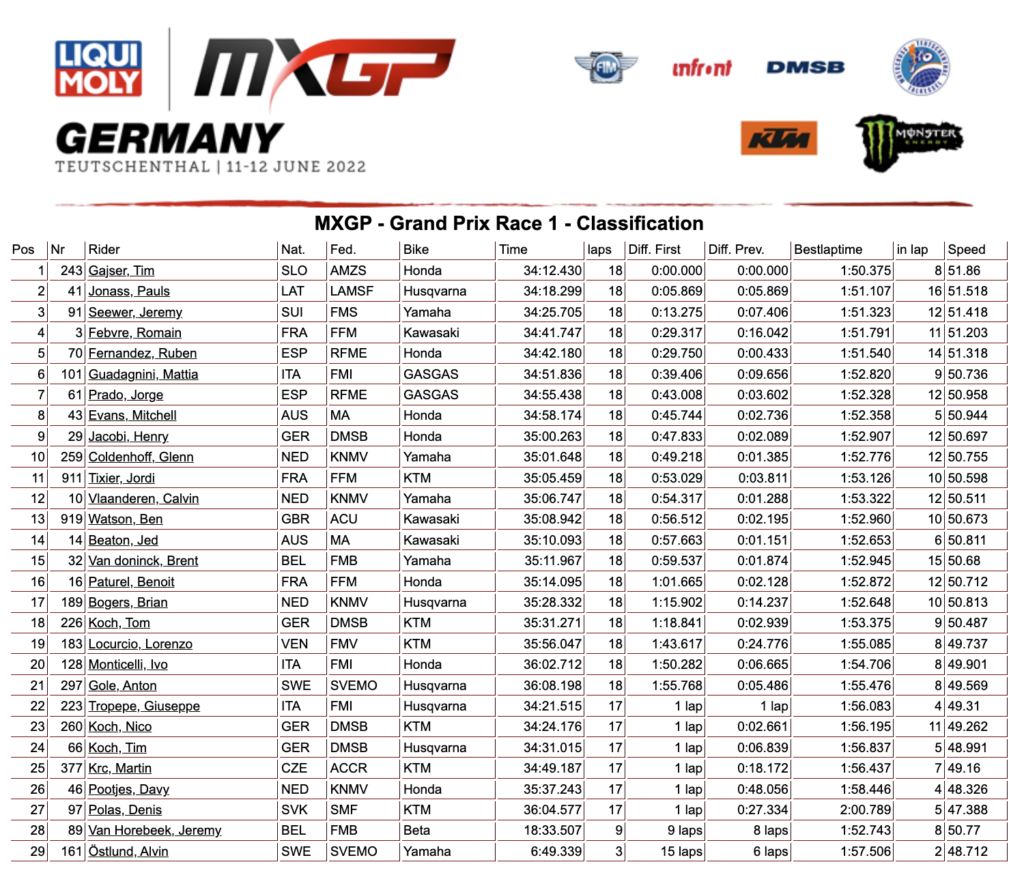 In race two, it was Seewer who got the Fox Holeshot that time around, with Gajser, Prado, Fernandez and JM Honda Racing’s Henry Jacobi just behind.

In the first few corners, Prado took second from Gajser who responded shortly after to move back up to his original positions.

Jonass crashed out of fifth as he and Fernandez looked like they had a moment. With Fernandez losing ground, Gebben Van Venrooy Yamaha Racing’s Calvin Vlaanderen was able to use this to his advantage to take over fourth from the Spaniard.

With Seewer in the lead, Gajser was looking fast though could not get close enough to the Swiss to execute an attack.

Fernandez meanwhile was looking to fight back and take his lost position from Vlaanderen who immediately went defensive to keep the Honda rider at bay.

In the end there was not big changes inside the top 10 as Seewer claimed his second race victory of the season. Gajser crossed the line in second ahead of Prado, Vlaanderen and Fernandez. 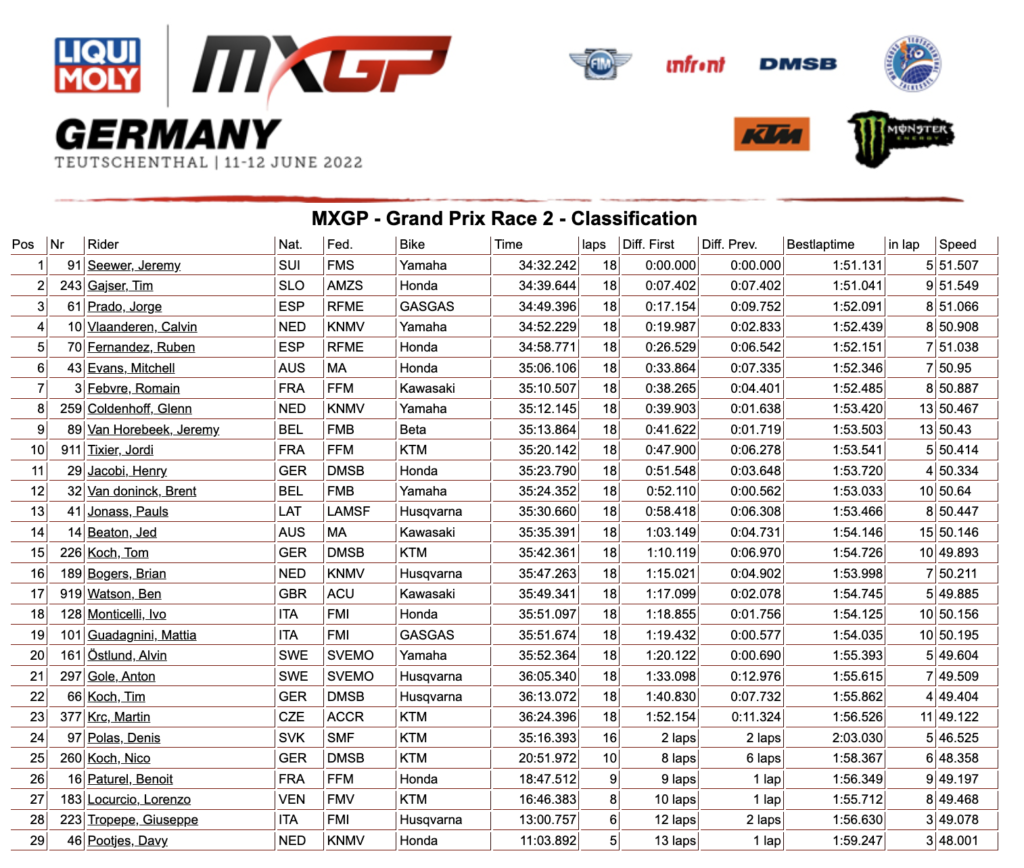 A 1-2 result gave Gajser the upper hand as he took his seventh overall victory of the season ahead of Seewer who made it two podiums on the bounce with second overall ahead of Prado who was third.

With Renaux out of the GP, Gajser now holds a 99-point lead in the championship standings ahead of Seewer and Prado who both move up.

Tim Gajser: “It was a really positive weekend; I was feeling great on the track. Yes I won today and also the starts were improving so super happy. First race, I took the Fox Holeshot, made a little gap and controlled the race. The second one I didn’t have the best start, I had to pass a couple of guys and then I was behind Jeremy who was riding really good and had good pace, so I just settled for second… I’m looking forward to Indonesia”.

Jeremy Seewer: “In the first race I felt frustrated because I couldn’t get Pauls, I tried a couple of laps. In the second race, I knew I needed a good start and finally I got my first Fox Holeshot of the year. I mean, I’m a good starter but this year I just haven’t managed to bring it around the first corner, but now I did and yeah. This was one of my best rides so far this season and I feel confident, had good rhythm, felt amazing on my bike and my fitness is good, so super happy, especially because Tim was super strong all weekend, I think he won every single session apart from that second race. That feels good and now we keep going”.

Jorge Prado: “Let’s say it was an ok weekend. After the first race I didn’t expect to be on the box, so it’s not too bad. Riding yesterday was okay, but today I didn’t feel so good on the track. I didn’t have so much speed and I was struggling a little bit. But I worked a lot in the second race to get third, I feel we made some steps in the in the right direction, but I feel like we still need to improve in many others. Especially on tracks like this. I am not performing like these two guys next to me, I really tried to stick with them, but they were riding too fast for me. The middle of the race I had good pace but not enough to get a victory, so I just need to work more, get better and that’s reality”. 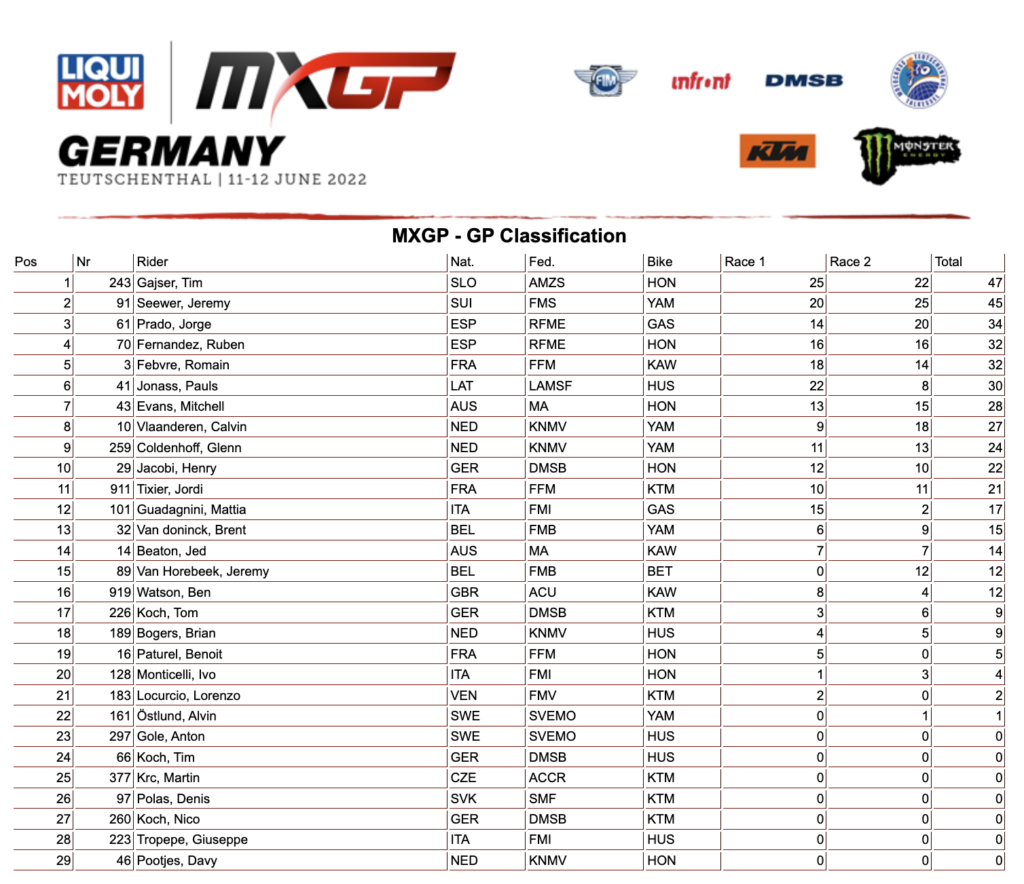