CHECK OUT OUR COMPLETE COVERAGE OF THE 2022 MXGP OF INDONESIA

The 12th round of the FIM Motocross World Championship has concluded on the island of Sumbawa which was the host of the 2022 MXGP of Indonesia and saw Team HRC’s Tim Gajser and Red Bull KTM Factory Racing’s Tom Vialle secure perfect 1-1 scores, as Vialle took back the red plate!

The brand-new venue of Samota Rocket Motor Circuit received raving reviews from the riders, who enjoyed the track that was specifically built for the event. Along with the forty thousand fans that lined the circuit and cheered on their favourite riders.

The Indonesian Grand Prix delivered a lot of excitement on and off the track, with a beautiful opening ceremony which included speeches from the officials, beautiful traditional performances and an impressive air show. 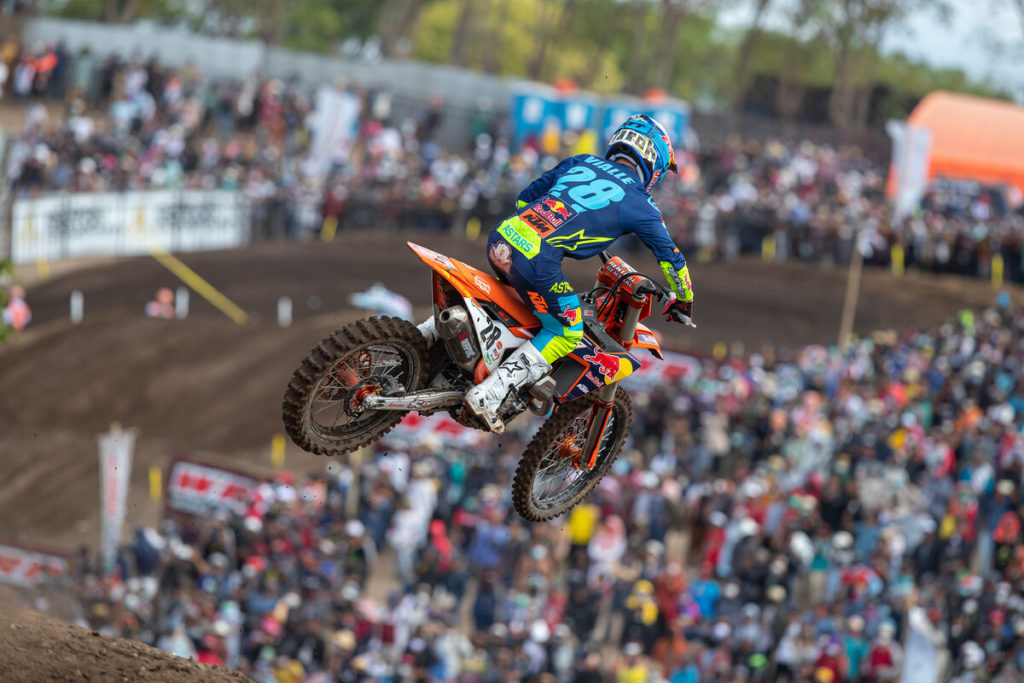 SM Action Racing Team YUASA Battery’s Andrea Adamo did not get off to the best start as a mistake pushed him back to second to last.

Red Bull GasGas Factory Racing’s Simon Längenfelder was another rider to get around Horgmo, as de Wolf crashed out of second on the eighth lap which allowed Geerts up to second.

By that point Vialle was already 3.167 seconds ahead of Geerts, who was looking to keep close to the leader and challenge him for the win.

Horgmo then got back past Längenfelder briefly, before the German and was the fastest rider on the track. All while Haarup was looking solid ahead in fourth, though a bike problem took him out of the race.

Geerts then started to make mistakes as he lost ground to Vialle. The gap went up to 9.484 seconds, then up to 12.266 and so on, by which point the Frenchman was looking comfortable and in control.

Further down the order, de Wolf, Horgmo and Längenfelder were locked in a tight battle for third, though de Wolf and Horgmo came together, and both crashed, which allowed Längenfelder to easily cruise into third. de Wolf got going again but began to fade as Horgmo and Rubini made a pass on the Dutchman, he eventually finished eighth.

In the end, Vialle won the opening race by 8.812 seconds over Geerts and Längenfelder. 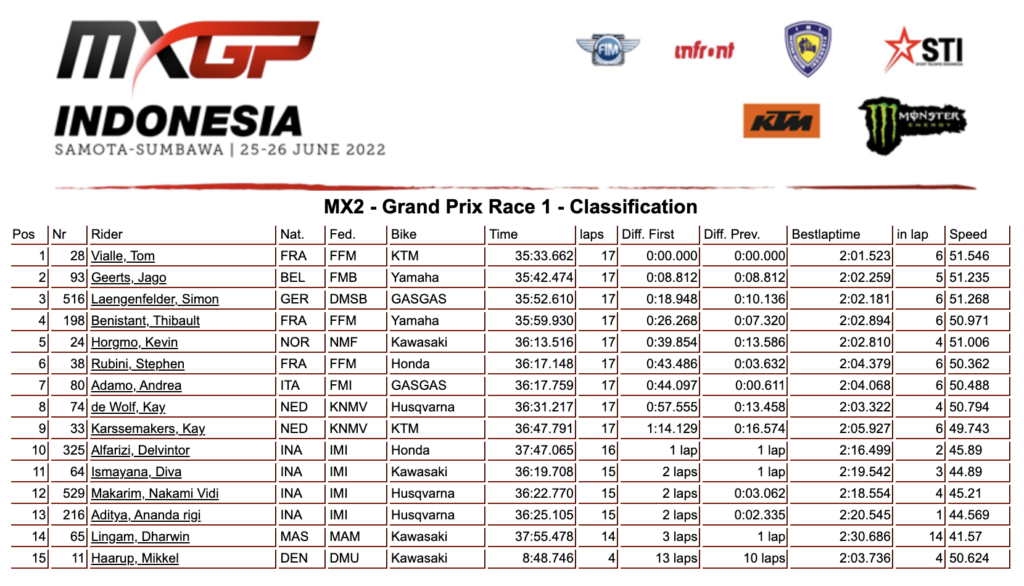 In race two, the Fox Holeshot went to Längenfelder, though Vialle took the lead immediately with Adamo third ahead of Monster Energy Yamaha Factory Racing’s Thibault Benistant. Horgmo had a problem in the opening lap as he dropped back to last, while Geerts was making up some positions in 8th.

Vialle meanwhile continued to lead Längenfelder, as the pair maintained a close gap.

Haarup was looking good in the second race, as he looked to make up for lost points in the opening heat. He pushed Hitachi KTM Fuelled by Milwaukee’s Kay Karssemakers for fifth and was able to make the pass stick, but shortly after he suffered another bike problem and did not carry on with the race.

Längenfelder was looking fast as he set several fastest laps of the race as he closed the gap down to Vialle to less than a second. The GasGas rider continued to urge Vialle along which caused Vialle to make a mistake and go off track and on lap five we saw a change for the lead.

Adamo continued in third, while Geerts was looking to make up valuable positions down in sixth.

Four laps later, there was another change for the lead as Längenfelder tipped over, which meant that Vialle was back in the driving seat and on his way to a perfect GP score.

By the end of the race, Geerts was able to get by Karssemakers for fifth, while Benistant passed Adamo for third on lap 10, which also put him on the box. In the end, Vialle won the race ahead of Geerts, Längenfelder, Benistant and Horgmo. 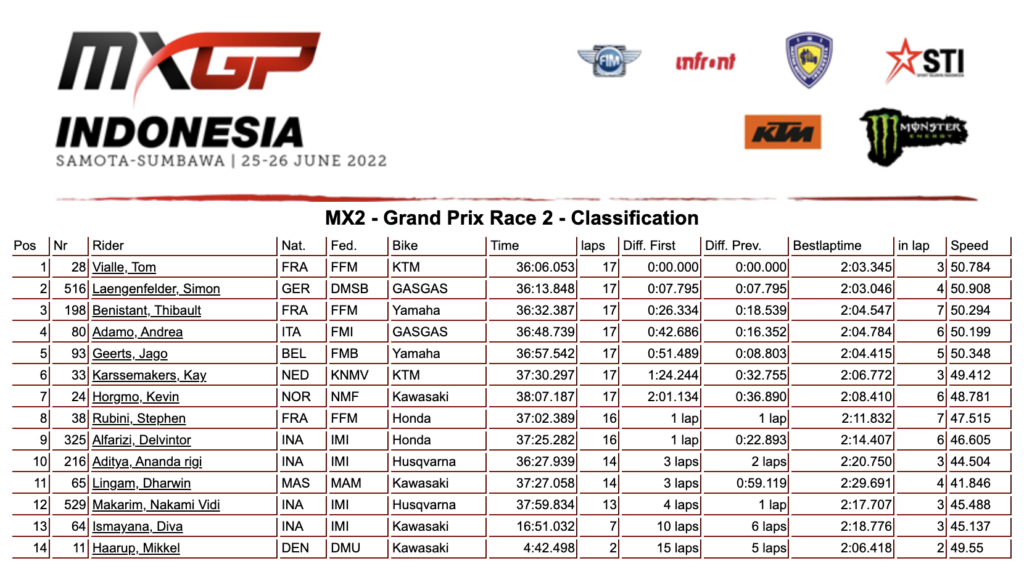 A 1-1 result gave Vialle the perfect score and put him on the top step of the podium, with Längenfelder second ahead of Benistant third, who celebrated his third podium on the bounce.

Vialle finished the Indonesian Grand Prix first, compared to Geerts’ fourth overall, which also means that the Frenchman now takes back the red plate and leads the championship standings by 4 points.

Tom Vialle: “It was actually a good race weekend, I had a nice feeling on the track since yesterday. In the first race, I had a great start and was leading with more than ten seconds, so I was pretty comfortable. In the second one, I passed Simon in the first corner and I was leading but then I had a mistake and went off track. I actually hit a marshal and I hope he is ok. Simon the led for a few laps and then had a crash so I took over the lead. I’m really happy about the weekend, it was great”.

Simon Längenfelder: “It was a good weekend. For me, the mesh here from the gates are a little bit different. So, I struggled in the qualifying race and in the first race a little bit with that. But I’m happy to get the Holeshot and then I was passed. Tom made a small mistake and jumped off track which allowed me to go first, I then pushed but unfortunately made a small mistake my front wheel slipped away. But nevertheless, I was second overall this weekend. Very happy to be on the podium and can go home with a smile”.

Thibault Benistant: “I’m really happy to be back again on the podium. I tried to be consistent as much as I can, this is not easy. But yeah, this weekend, I struggled a little bit all weekend. In the end, it was quite a good result for a bad feeling on the bike and on the track, so I’m quite happy and we’re going to try do the same thing at the next one”. 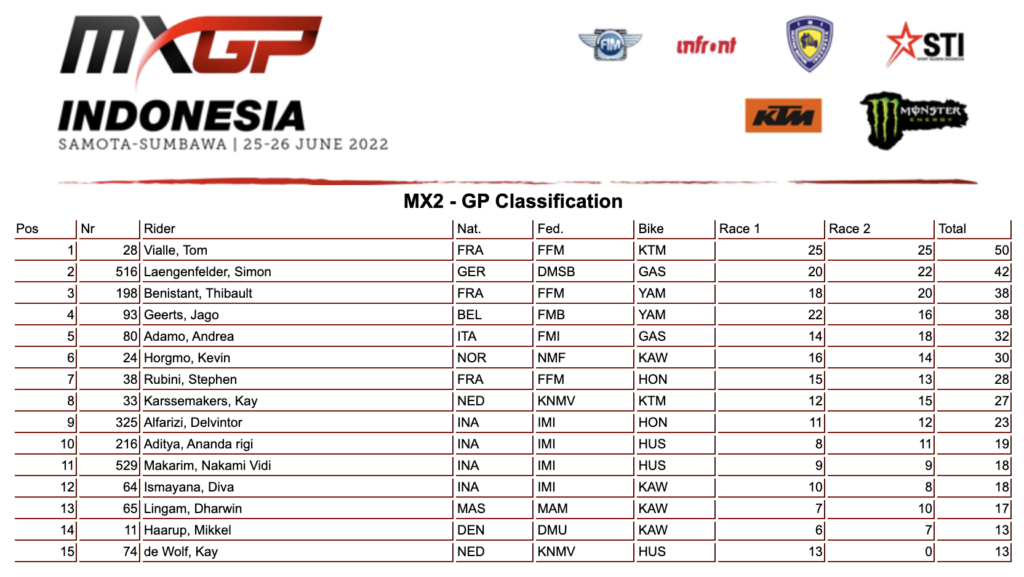 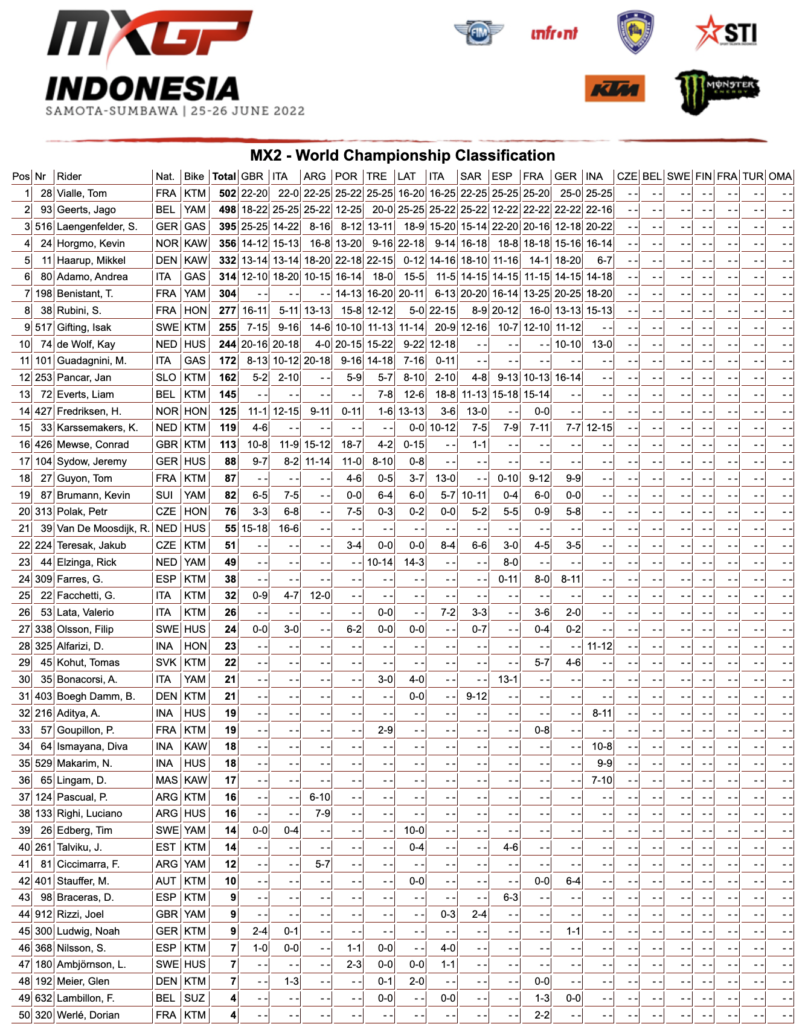 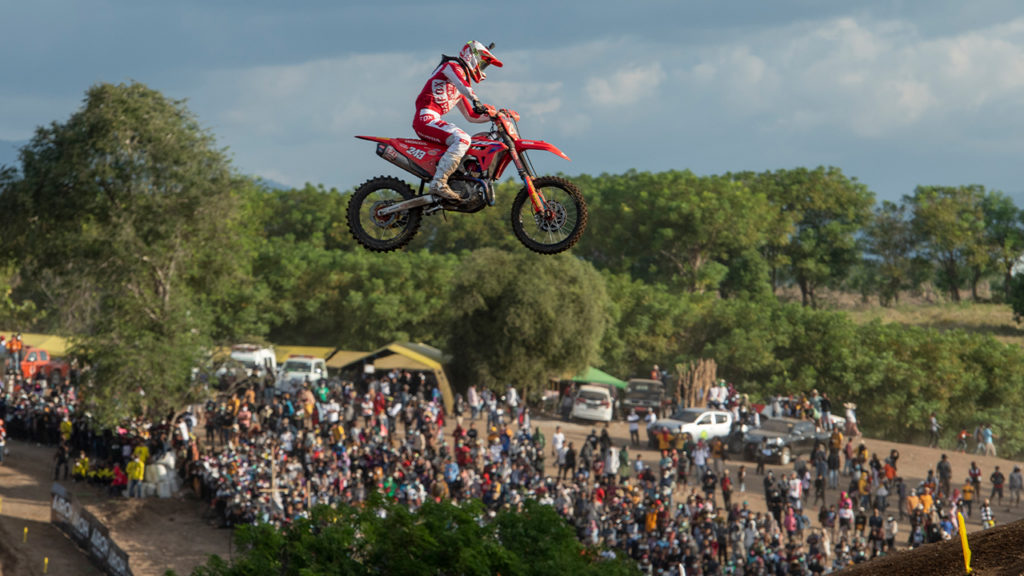 In MXGP race one, it was Team HRC’s Tim Gajser who grabbed the Fox Holeshot, as Kawasaki Racing Team MXGP’s Ben Watson hit the gate and was left with quite a bit of work to do as he started last.

Febvre then got passed by Standing Construct Husqvarna Factory Racing’s Pauls Jonass who got straight onto the rear wheel of Coldenhoff for fourth. Though Febvre was not going to go down without a fight, as he looked to re-group immediately.

A couple of laps later, Jonass crashed and dropped back to ninth. The Latvian got going quickly and was able to pass Gebben Van Venrooy Yamaha Racing’s Calvin Vlaanderen for eighth, and the Red Bull GasGas Factory Racing’s Mattia Guadagnini to finish the race seventh. Vlaanderen later suffered a bike issue and pulled out of the race.

Team HRC’s Mitch Evans passed F&H Kawasaki Racing’s Jed Beaton for sixth on lap five, as Fernandez lost a bit of ground to Prado, though he remained close and pushed his fellow Spaniard.

In the end, Gajser took his 12th race win of the season ahead of Prado, Fernandez, Coldenhoff and Febvre.

In the second race, the Fox Holeshot went to Prado as Gajser got squeezed on the start by Febvre and dropped back to fourth. Fernandez was able to get around Gajser too, though the Slovenian passed him back a couple of corners later.

Prado was looking good in first place, while Gajser began to focus on Febvre who was just ahead. It took the Honda rider a lap to find his way up to second, as he flew past Febvre. A lap later he was onto the rear wheel of Prado and was also able to find his way into the lead.

Further behind, Evans continued his strong run as he closed in on Jonass for fifth. The pair battled closely for three laps, before Jonass crashed. The Latvian got going fairly quickly and only lost two positions to Fernandez and Coldenhoff.

Monster Energy Yamaha Factory Racing’s Jeremy Seewer, who suffered with food poising all weekend, was fighting strong inside the top 10. The Swiss had Guadagnini and Vlaanderen just ahead of him.

Gajser and Prado maintained a consistent gap to one another, as the Spaniard did not let the Slovenian get away easy. Febvre was third and being pushed by Fernandez, who was on his way to another podium finish.

In the end, Gajser was able to go 1-1 ahead of Prado and Febvre who crossed the line third. Fernandez finished fourth ahead of Evans. 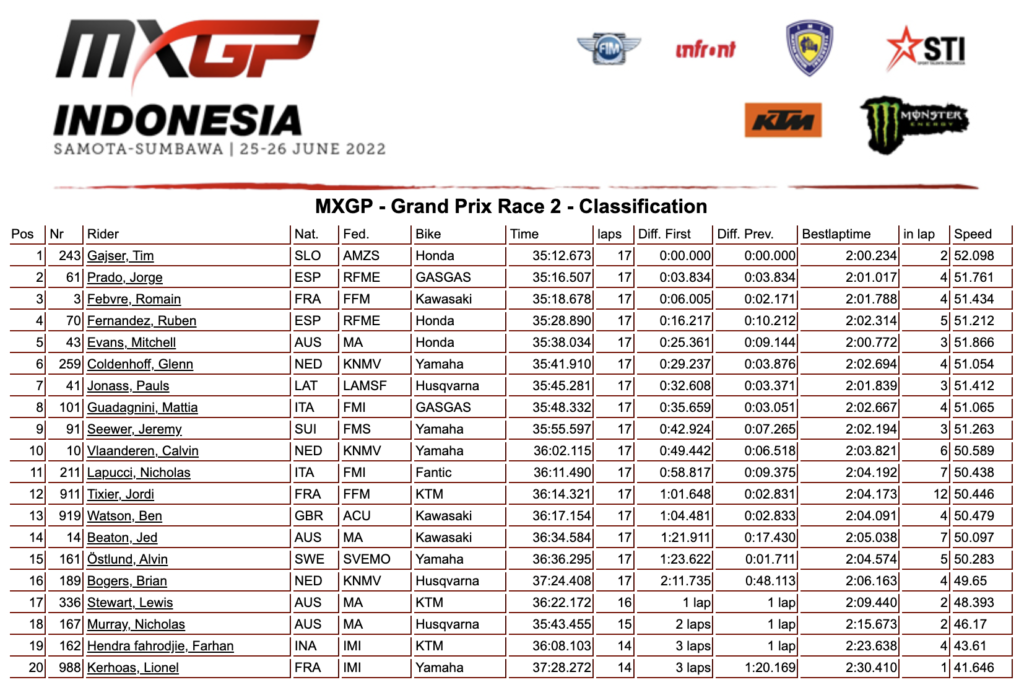 Two race wins put Gajser on the podium, Prado finished second on the box for the fourth time this season, ahead of Fernandez who celebrated his second podium of 2022.

Gajser now has an impressive 125 point lead over Prado who moves up to second ahead of Seewer who drops to third.

Tim Gajser: “I’m super happy. I was enjoying all the weekend; the track was super nice. We also had nice fans; we got a really nice welcome here in Indonesia. Overall, I am super happy, going one-one in the races. Thanks to my team, we have been working super hard to get back in good shape. Bike is good. Now we take a little bit of rest and then we are back to it in two weeks”.

Jorge Prado: “It was a good weekend. I felt a little bit better than yesterday; it was a tough track and Tim was unstoppable this weekend, I tried really hard. I got a good start in the second race, but Tim had better pace and passed me but I stayed with him the whole race and Romain was pushing me but I held on. We are going up and now have some time until the next race and I will try to get some rest, do some good training and step it up”.

Ruben Fernandez: “This weekend was good for me overall. Since Saturday, I felt good with the track, third in time practice, third in qualifying and third in the first race, and fourth in the second one for third overall which was very solid. Finally I made it, two Spanish flags on the podium, so I think the Spanish motocross fans will be happy”. 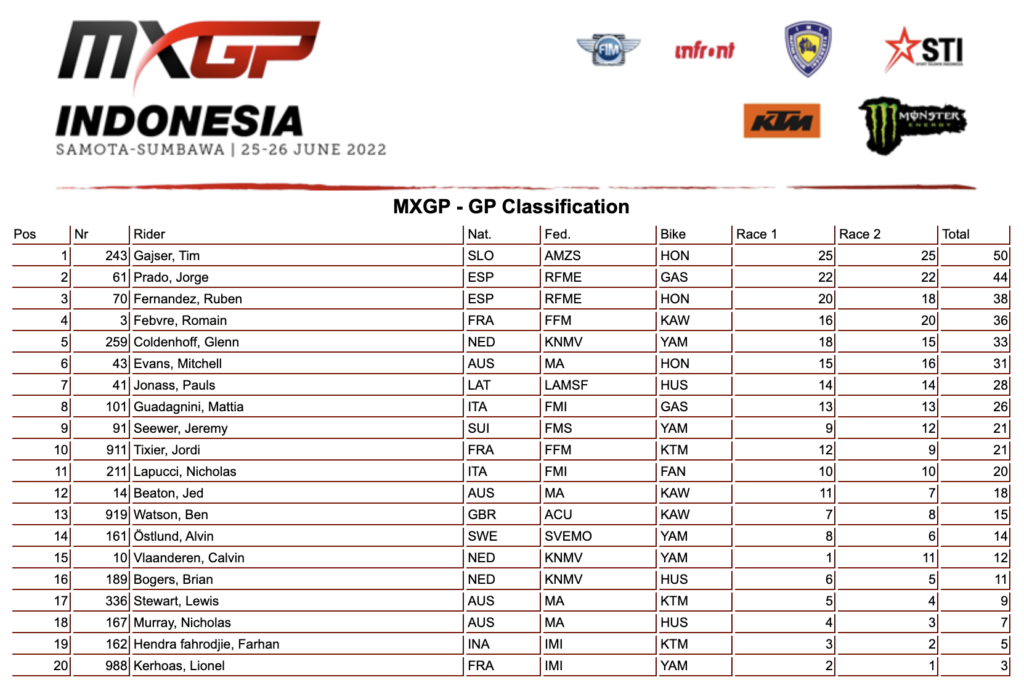 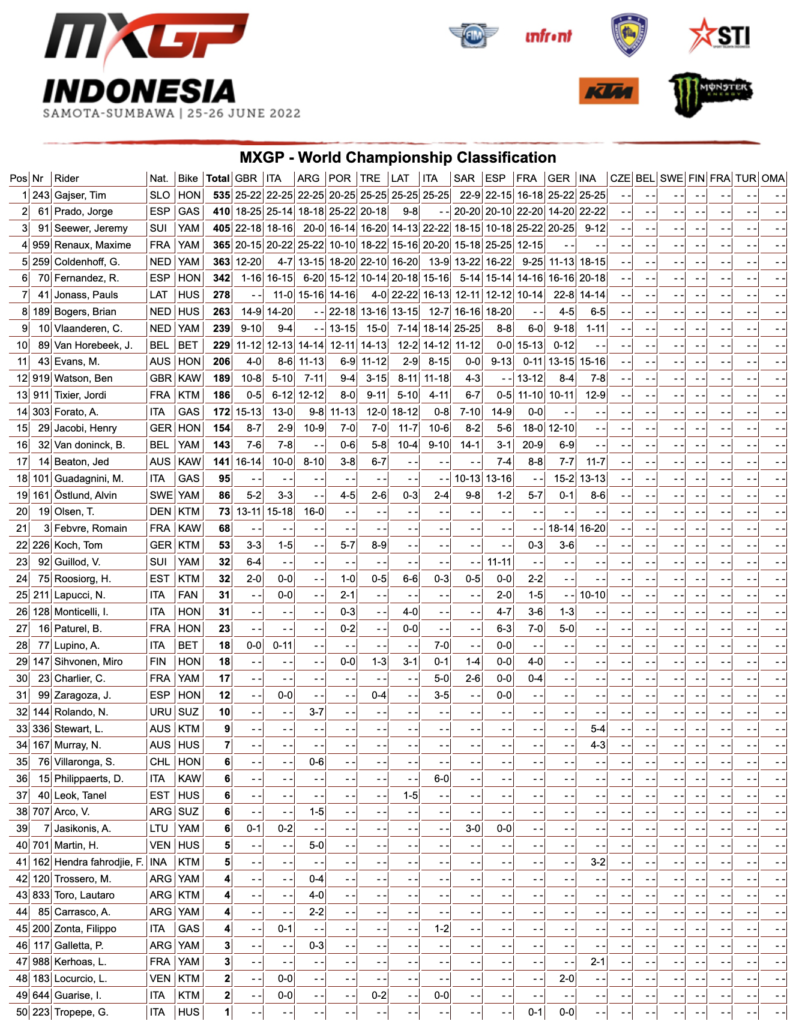