CHECK OUT OUR COMPLETE COVERAGE OF THE 2022 MXGP OF LATVIA

Though bringing the excitement for the Latvian fans here in Kegums, was Standing Construct Husqvarna Factory Racing’s Pauls Jonass who put on an impressive performance, keeping the championship leader, Tim Gajser of Team HRC at bay to finish second, which gave his home crowd something to cheer about!

In MX2, it was Monster Energy Yamaha Factory Racing’s Jago Geerts who was the leading rider in and out of the first corner, with Red Bull KTM Factory Racing’s Tom Vialle, Nestaan Husqvarna Factory Racing’s fill-in rider Jeremy Sydow and Isak Gifting of Hitachi KTM fuelled by Milwaukee also getting a good start.

Big Van World MTX Kawasaki’s Mikkel Haarup got a good jump out of the gate, after going fastest in timed practice, though slipped back to around 9th on the opening lap and had to work his way up the order.

Nestaan Husqvarna Factory Racing’s Kay de Wolf didn’t get the best start and had to come through the back of the field. After a slow beginning, he was able to find a good rhythm to finish the heat in 8th, giving him a decent starting position for tomorrow.

Though a rider to watch was F&H Kawasaki Racing’s Kevin Horgmo who, together with Haarup, made some good passes before catching onto the rear wheel of Red Bull GasGas Factory Racing’s Simon Längenfelder by the second lap. At the same time, Gifting made the pass on Sydow for third.

Gifting was looking fast as he went purple in sector one a couple of times and was setting lap times fast enough to run with the front-runners. Throughout the race he was chipping away at Vialle’s lead ahead of him in second and with two laps to go was able to make a pass stick on the championship leader.

All while, Haarup urged Horgmo onto the back of Längenfelder and after a couple of failed attempts, both Horgmo and Haarup were able to get past the German who dropped to seventh. Haarup then looked like he was going to make a move on Horgmo before going down with just two laps to go and eventually came back to 19th.

Geerts ended up taking his fourth pole of 2022, winning 13.044 seconds ahead of Gifting and Vialle. Horgmo was fourth ahead of Sydow who made his debut on the factory Husqvarna an impressive one.

Jago Geerts: “I just felt really good on the bike. I got the holeshot and then was pulling away throughout the whole race. I am feeling good and feeling ready for tomorrow. I’ll try to do the same thing to get a good result”. 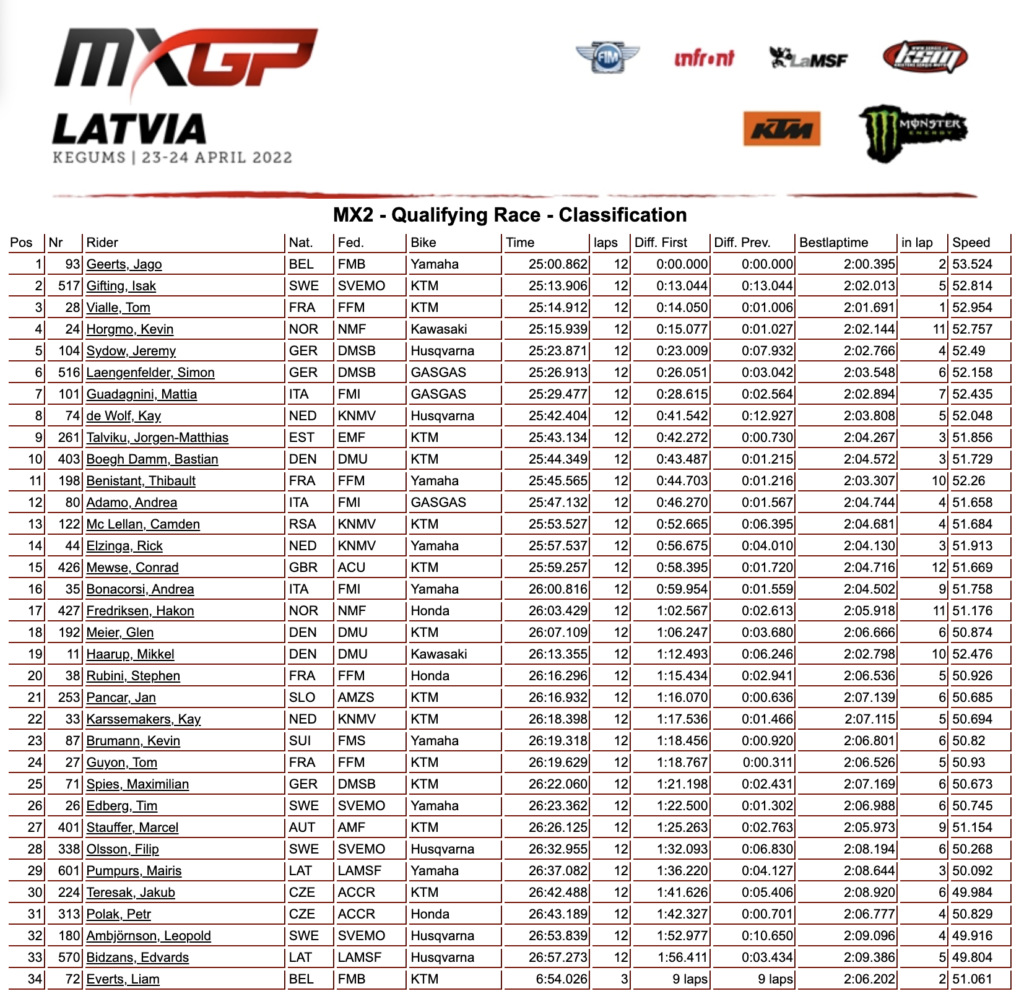 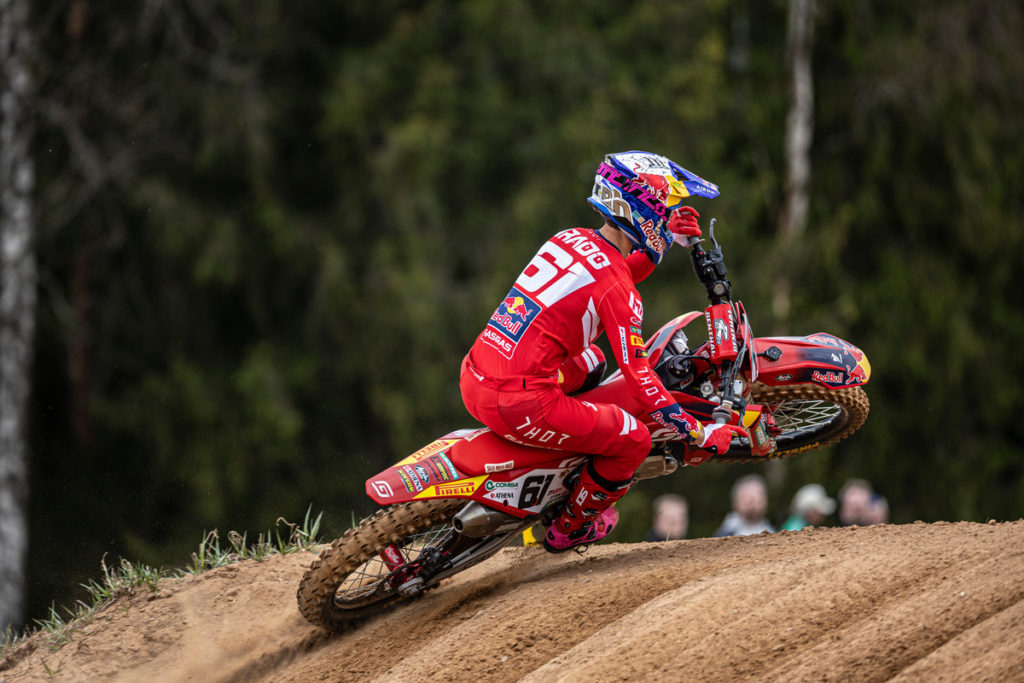 As the gate dropped for MXGP qualifying heat, it was Red Bull GasGas Factory Racing’s Jorge Prado who got a flying start and led the way ahead of Monster Energy Yamaha Factory Racing’s Jeremy Seewer who was very briefly in second, though home favourite Pauls Jonass of Standing Construct Husqvarna Factory Racing was quick to get around the Swiss, who then dropped to third ahead of Team HRC’s Tim Gajser.

Yamaha Factory Racing’s Maxime Renaux crashed on the opening lap, as Seewer made a mistake of his own, dropping down to sixth, allowing Honda 114 Motorsports’ Ruben Fernandez, Gajser and Standing Construct Husqvarna Factory Racing’s Brian Bogers through.

For almost four laps, Fernandez kept Gajser at bay, making it hard for the Slovenian to get around. Gajser was patient and by the fifth lap was able to find a way through and focus his attention on Jonass ahead.

Diga Procross KTM Racing’s Thomas Kjer Olsen had a big crash on the same lap, as he went out of 10th. He swiftly received medical attention, but the consequences of this crash are yet to be known as we wait on an official update from his team.

Fernandez then crashed too, as Gajser caught onto the back of Jonass, who was around 3.685 seconds down on Prado, who was set in his how rhythm and pulling away.

Gajser then went off track as he pushed to get by the Latvian, while further down the field Gebben Van Venrooy Yamaha Racing’s Calvin Vlaanderen was fighting back through the pack, as he got himself into 11th and then 8th by the end of the race. Fernandez also was able to come back to sixth ahead of JT911 KTM Racing’s Jordi Tixier.

In the end, Prado went on to win his first qualifying race of 2022 as he crossed the line 4.639 seconds ahead of Jonass who was able to maintain the position and keep Gajser behind him in third. Bogers was fourth with Seewer fifth.

Jorge Prado: “It was a great qualifying race. I got the holeshot, which is what I really wanted to do, in the sand it’s good to start in the front and then you can ride your own rhythm and that’s what I did, pushed a little in the first minutes and then I was controlling the race. The track was tricky, but I was enjoying it. Thanks to the whole Red Bull GasGas Factory Racing crew, we have been working to achieve this, thanks a lot guys, we are going in the right direction”. 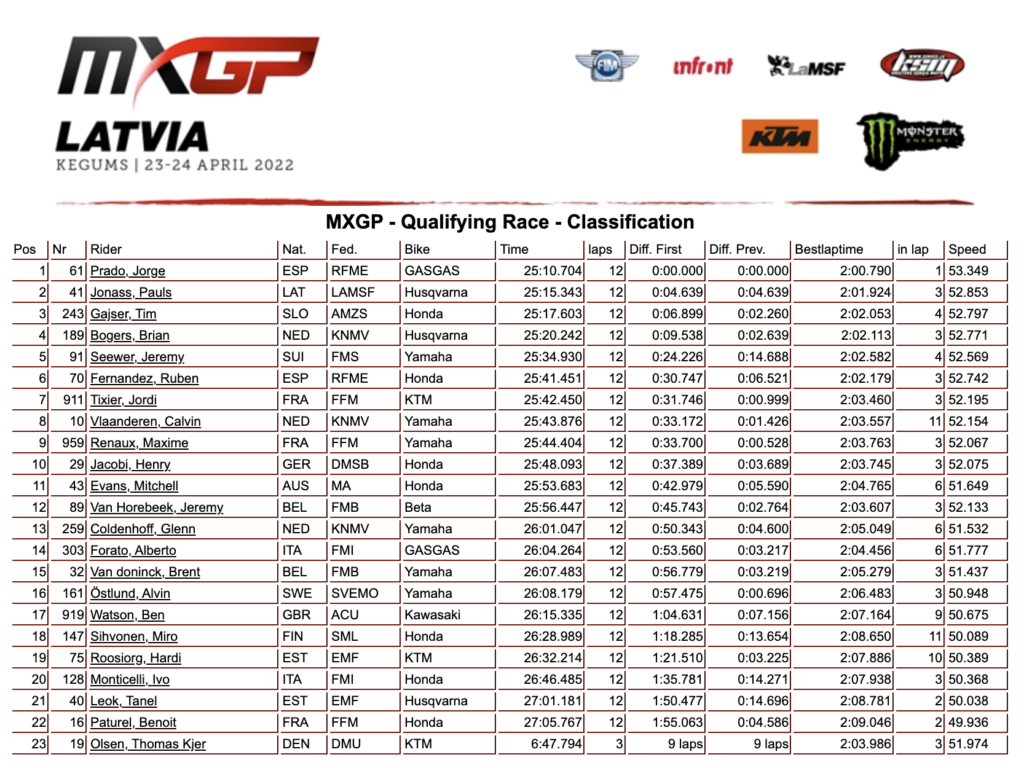