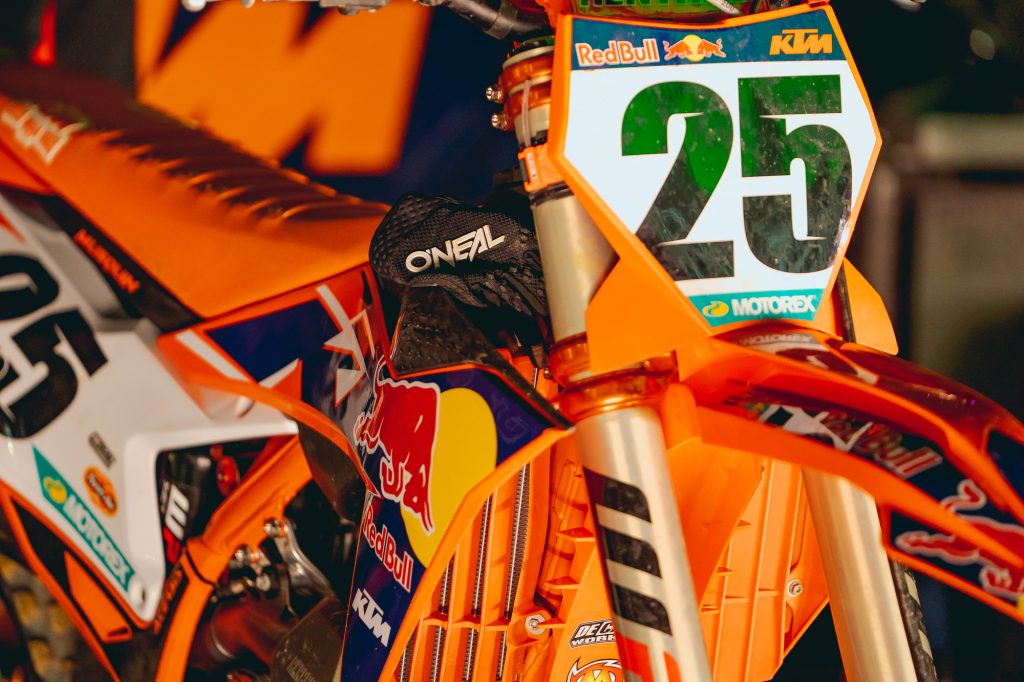 The Lariviere Organisation and Xavier Audouard had reasons to be ambitious when putting together the 2022 Paris Supercross. Although 2020’s first-ever cancellation and 2021’s pared down one-day show made for stressful times, and the global economic situation that followed brought its own challenges, they were confident that a high-profile rider lineup could bring a crowd to the La Défense Arena and reaffirm the race as a crown jewel in the offseason calendar.

So, they went as big as they could, and in June announced that Eli Tomac, Jett Lawrence, and Hunter Lawrence would be on the starting line. Commitments from Cooper Webb and Marvin Musquin followed, as the two had their own reasons to race (a chance for Webb to get back into things after a summer vacation, a trip home and shot at a fourth King of Paris crown for Musquin) and the full support from Red Bull KTM. Anticipation was reflected by box office figures, because the rare chance to see two recent AMA 450 champions, perennial favorite Musquin, and the budding Lawrence brothers on the track against France’s SX experts sold every seat to Saturday night’s show.

Things were looking good for Audouard and Lariviere a few weeks before the event. Riders were ready and healthy, ticket sales for both days were strong, and agreements to broadcast the action around the world, in French and English, were coming together. Yes, it’d had been a big endeavor, especially after two tight years, but soon the sport’s collective attention would be theirs.

And then came news that the Lawrence brothers couldn’t leave the United States.

Audouard and I are recapping this on Saturday night, outside of the Renaissance Hotel located in the La Défense business complex. It’s been a few hours since the checkered flag flew on the SX1 Finale, but almost every rider, mechanic, team tech, or significant other is still together, now lined up next to a food truck hired to feed them after midnight. Things like post-race dining, accommodations, or the immediate presence of Eric Perronard should an issue arise are what competitors appreciate most about the Paris Supercross. Sure, the show-up money plays a part, but getting the rider’s trust, the way Xavier and company have for the last four decades, is more about commonsense details than dollars.

The Lawrence brother’s situation was a brief crisis, Audouard admits, but after both parties exhausted their options and agreed to try again soon (i.e., when the siblings are faster and more popular), all efforts and budget went towards Ken Roczen. Getting the German rider to the European event had been a decade-long endeavor, but now that exact situation, plus the addition of Justin Brayton, was happening in just a few days.

I tell Xavier that the final roster turned out to be better than the impressive original list, and while appreciative, he’s quick to bring up next year, the race’s fortieth anniversary.

What stood out from three days at the LaDefense Arena?

Roczen was on it from the first laps of Friday’s media session to the checkered flag for Sunday’s finale. Whoop speed, the thing Ken said he lacked most in 2022, proved to be his best attribute in Paris and he raved about the handling of the Honda Genuine Honda CRF450R. We noticed he wasn’t in the work area as much during timed qualifying, which shows he really wasn’t touching the clickers.

We’ll rewatch the back-and-forth battles between he and Tomac a few more times during the offseason. Both were willing to show a wheel or close a line off, then immediately retaliated to passes, but kept it clean through all six motos. Scroll through the gallery to see a sequence of the quick pivot-cut under-pass-triple out from Sunday’s second race.

People were amped to see Roczen. Getting into the Honda pit area meant finding a break in the crowd that surrounded it, a mass that surged anytime he stepped out of the rig and carried on into the street.

How much did the Paris Supercross matter to Tomac? That’s debatable, but Eli is Eli, and we’re sure that he wanted to win. He had the usual ET moves, like a big wheelie-pump into a rhythm lane and hard acceleration out of every corner, yet seemed to labor through the whoops and made a big mistake during SuperPole. We watched him try different lines during Sunday’s lone practice session, some that didn’t work out, but he put things together when it mattered for 1-2-1-3-2-2 finishes and second overall.

No, Tomac wasn’t on the 2023 YZ450F. Yamaha Europe held onto the 2022 model that Monster Energy/Star Racing/Yamaha sent over for Cardiff WSX, a setup the rider knew well and could go another weekend.  Even with a familiar bike, Tomac admitted to struggling with the sticky clay, soil he said is unlike anything in the US.

Getting the new bike sorted out was the next order of business for Tomac and Star Racing, particularly its chassis balance.

Also, watching Tomac while Led Zeppelin played through the stadium on Friday afternoon was cool. The raw video is about 25 minutes long and shows how each rider learned the layout and linked together laps during their solo sessions.

Has Justin Brayton ever been faster? The thirty-eight-year-old is at a career crossroads, done with full-time AMA competition but open to a pick and choose schedule, should opportunities to do the Paris Supercross, the Australian championship, and maybe World Supercross continue to come. With the way things are going, we could see JB10 lining up for a Supercross somewhere at forty and being competitive.

His Honda Genuine Honda Racing CRF450R was a mix of parts, from team partners Wossner and HGS to rider-specific pieces like Showa-tuned suspension and Dunlop tires. The team told us that the bike was basically what Dean Wilson was on during WSX, and that Brayton will run it through the final two rounds of the Australian series.

Brayton has already found a few things to fill his time in “retirement,” including a move back to North Carolina to manage 10 Cycles, a commentator role for the General Tire Arenacross Outlaws on FS1, and as a coach to current pro racers.

The race was the soft launch for KTM’s updated 450 SX-F Factory Edition. It wasn’t a secret ride, as Webb and Musquin both talked about the bike openly and repeatedly, but the factory team didn’t exactly call attention to or point out the changes made to address the handling issues. We did notice that the rigidity spar in the frame’s cradle was absent, that the area around the shock looked a little beefier, different engine hangers for Musquin and Webb, and split-design clamps holding the forks. More details should come out at official team launch, which is scheduled for the first week of December.

Carlos Rivera and Kyle DeFoe built the bikes at the Austrian shop, loaded them into the race support Sprinter vans, and drove to France. The trip was DeFoe’s first as a KTM employee (he will take over mechanic duties for Marvin Musquin while Frankie Latham moves into a new position within the team), and the time at headquarters, in the garages, and around the town showed him just how big the company is.

There were highs and lows. Both were seen as podium picks coming into the weekend, Musquin a favorite for KoP, but Webb’s early lack of comfort and two crashes in one race by Musquin on Saturday night did a number on their overall scores. Webb was much better on Sunday, improvement he credited to suspension changes and that put him back in the mix for a podium. Unfortunately, the effort was ended by a missed line and off-track moment in Race Three. Not getting a fourth overall win was a bummer for Musquin; though he was one of the fastest on track at times and was the crowd’s clear favorite, he was never in the fight for a key position.

As for the bike, we’re interested to see how a bigger pool of riders look on it, especially after a full preseason of prep and testing. Getting better through the whoops is said to be the main objective, and that’s a section where guys like Stewart-Craig-Plessinger may show more speed than Webb and Musquin.

With two of the main offseason events, the Monster Energy Cup and AUS-X Open, absorbed into championship projects by their respective promoters and European staples like Geneva and Genoa now gone, the Paris Supercross is now the only standalone event that can get a high-profile rider to show up. Will more guys take notice of it, especially as Supercross-only options return to contracts?

2022 Paris Supercross | How Was Your Sunday
Michael Antonovich November 14, 2022

2022 Paris Supercross | How Was Your Sunday