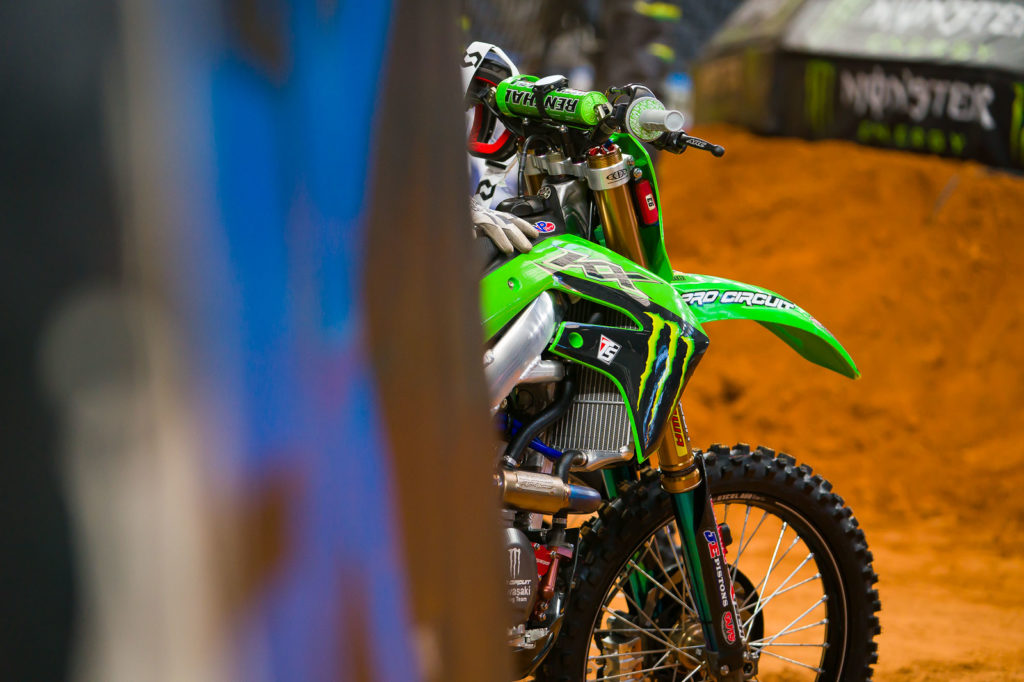 Monster Energy/Pro Circuit/Kawasaki has confirmed its 250 Class roster for the 2022 AMA Supercross and Motocross race season, a five-rider lineup that has been shaped by contract extensions and a rookie addition. The team will consist of Austin Forkner, Jo Shimoda, Cameron McAdoo, Seth Hammaker, and Jett Reynolds, who will race KX250 bikes during one of the East Coast/West Coast regions of SX and the entire 250 MX series.

This will be Austin Forkner’s seventh season with the PC squad, and from what we understand, the final year of his current contract. A multi-time 250 SX Main Event winner, Forkner’s past seasons have been noted by injuries and an ongoing return to form through recent races.

Cameron McAdoo will return to the team for a third season. An eventful 2021 saw McAdoo claim the first 250 SX Main Event wins of his career, make headlines with a wild week in Atlanta, contend for the 250 West Coast SX title, and sit out the summer due to a torn ACL.

Jo Shimoda was a last-minute addition for in 2021, a role earned through a “tryout,” and went on to be the most consistent finisher of the group. Shimoda made history by being the first Japanese rider to win a 250 SX Main Event, then scored several podium finishes in SX and MX.

Seth Hammaker will spend his second pro season as part of the Kawasaki squad. Energy-draining health issues hindered Hammaker through much of 2021, but one 250 SX Main Event win and three 250 SX podiums were highlights of his rookie year.

Jett Reynolds, a longtime Team Green amateur star, will transition to the professional ranks with PC. A broken collarbone in August prevented Reynolds from lining up for the final rounds of the 250 MX series in 2021 and pushed his debut to the 2022 SX season.

The team will be without Jordon Smith in 2022, a split that the rider confirmed on his own earlier in the week. A former 250 SX Main Event winner and championship leader, Smith spent much of the past year on the sidelines with a serious shoulder injury; what he will do in 2022 is still uncertain.

As one of the most successful teams in the paddock, Monster Energy/Pro Circuit/Kawasaki boasts an impressive resume that includes the most combined supercross and motocross wins in the 250 class and 29 total championships.

“We have a skilled group of riders on the team for the 2022 season,” said Mitch Payton, Pro Circuit owner. “With seasoned riders like Austin, Cameron, and Jo returning, last year’s rookie sensation Seth ready to begin his sophomore season and Jett making his pro debut; we are in a good spot to compete for both 250 West and East Supercross titles. Everyone on the team including riders, staff and personnel, are preparing for the new season to begin and we expect to finish on top of the podium.”

Returning for a seventh season with the Monster Energy/Pro Circuit/Kawasaki squad in 2022 is Austin Forkner. The 12-time 250 Class race winner has high hopes to return to his winning ways this season after his promising 2021 supercross title campaign was cut short due to injury.

McAdoo is also back under the Kawasaki tent for the upcoming season. Coming off a career-best season in 2021 that saw McAdoo collect his first AMA 250 Supercross win, the Iowa native is keen on improving his third-place finish in the Supercross 250 West Championship point standings.

Back for his second year with the Kawasaki team is Shimoda. Building on a stand-out 2021 season, the Japanese-born rider secured a career-first 250SX Class win along with six podiums last season and appears ready to use his experience running up front to mount a championship fight.

Entering his sophomore season, Hammaker returns to the Kawasaki squad with his first career 250SX Class win and three AMA Supercross podiums under his belt. Last year’s rookie stand out heads into the new season with expectations to battle for race wins and podiums.

Making his professional debut with the Monster Energy/Pro Circuit/Kawasaki team is Reynolds. Carrying nine AMA Amateur National titles and the 2017 Monster Energy Cup Supermini Class championship, Reynolds is set to make an immediate impact for the team in both series at the beginning of the 2022 season.