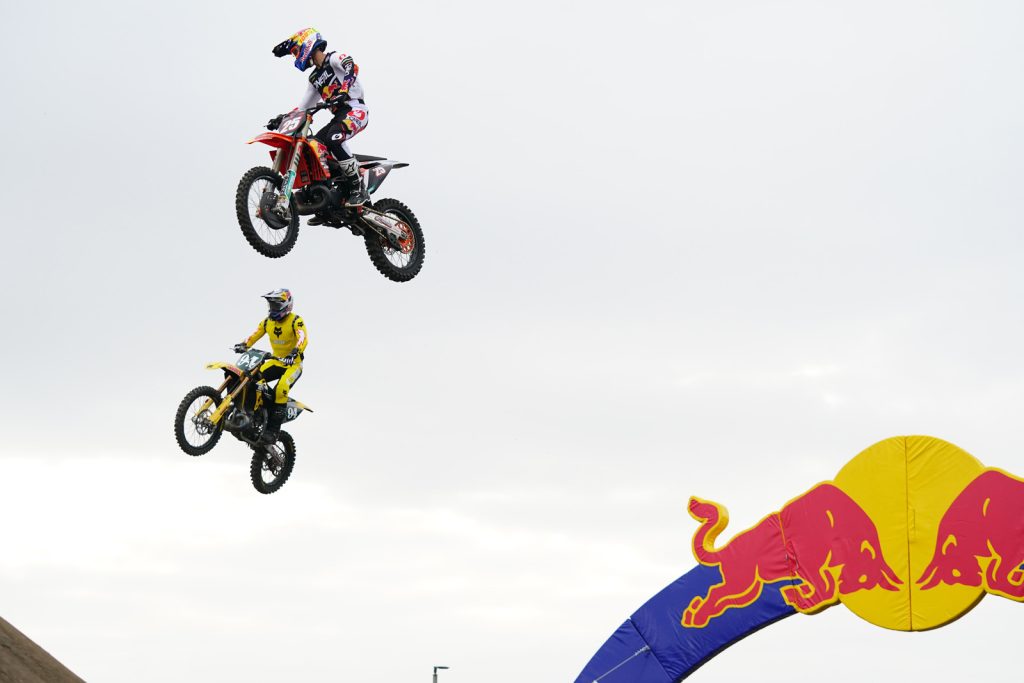 After a three-year hiatus, the Red Bull Straight Rhythm returned with its wildly popular two-stroke-only rules and head-to-head bracket format, but this time in a new location. Southern California’s famed Huntington Beach served as the backdrop for the special offseason race, and the coastal climate played a role in the racing. In the end, Marvin Musquin kept his spotless record at the RBSR intact, going undefeated in every single run for the 250 Class win, while small bike specialist Carson Brown took top honors in the 125 Class.

Two excellent starts put Roczen ahead in the early section of the track, and once out front, he was able to cruise to two wins and the next round.

Blose put up a fight in run one, but the efforts caused him to make a mistake and get out of sorts after a few big jumps. Although Blose didn’t crash and actually closed back in, Politelli managed to take both wins and advanced up the bracket.

Although Barcia won races one and two handily, the pair was sent back to the starting gate after officials noticed the Troy Lee Designs/Red Bull/GASGAS rider crossed the lane splitting line in run two, which turned the win to Izzi. Barcia got it done in the third run and moved on.

One of the oddest, but most competitive pairings of the weekend was between the two-time 450 SX champion and the crowd favorite two-stroke specialist. Webb, a rider with little experience on a smoker, managed to get two wins over Steinke, who kept it close all the way to the whoop section.

Musquin, the winningest rider in RBSR history, started his day with two quick runs and two wins against privateer Grecco.

Wageman stayed close to Plessinger for the first part of their races, but when the two reached the second half of the track, with its big jump and long whoops, AP was able to pull away.

Big jumps and high intensity helped Hill overcome Alessi’s trademark launch out of the gate, and the former 250 SX champion won both matches.

Hansen’s willingness to uncork a big quad-quad in the first rhythm lane put him ahead of Moranz in the early moments, and though the Kansas privateer stayed close, he couldn’t beat Rockstar Energy Husqvarna Factory Racing’s new test rider.

Two surprisingly close runs saw Politelli keep Roczen in sight. A big whip over the 80-foot tabletop in race one, followed by a blitz of the whoops in race two, earned Roczen the wins.

Another competitive match-up, this time between two factory riders, resulted in some of the fastest times of the day. The two stayed within inches of each other down the 1/3-mile course, but Barcia wicked it up over the big jump and through the whoops to win.

The Red Bull KTM teammates showed there was two fast ways to get down the track. Plessinger was at his best in the first and last sections during run one, but Musquin made it happen in the middle of the track and got the win. Musquin was much improved in run two and went largely unchallenged to the win and next round.

The closest matchup of the weekend went three rounds. Hansen had it from the rip in race one, but Hill stayed close. A better start in race two put Hill ahead, and although Hansen reeled him in and was close entering the whoops, Hill was able to eek out the win. With a win a piece, they lined up for the tie-breaker. Hansen uncorked the quad-quad, Hill rallied to close the gap, and they were even going into the whoops. Hansen’s drive over the whoops and an intentional overjump got him to the finish line first.

Another highly anticipated pairing, this time between two rivals. Barcia’s drive out of the gate in race one put him ahead early, but Roczen cleared the quad, skimmed the whoops, and snatched the win. Roczen got a better start in race two and built a small gap, which Barcia worked to close until another big, low whip over the 80-foot jump by Roczen sealed the deal.

Musquin’s ability to ride the rear wheel, stay low over jumps, and drive power to the ground was the key to his wins over Hansen. An efficient lap in run one got MM25 the clear win, but he had to work to beat Hansen’s holeshot and quad-quad in run two, which he did by scrubbing and whipping down the track.

A band of rain hit the area just before the final rounds and turned the perfectly-prepped track into two slick and technical lanes. Hansen hit the quad-quad in race one to get the lead, but Barcia stayed low charged back to the win. Run two was better for Hansen, as he stayed lower and drove forward over every obstacle for the win. The tie-breaking third run came down to mistakes; Barcia spun out of the gate and lost lots of ground, Hansen clanked one of the big jumps in his run and saw his momentum come to a halt, and Barcia came back for the win.

The rain seemed to make the biggest difference in the final rounds, as Roczen and Musquin wanted to push the pace without losing control in the conditions. Musquin didn’t seem too fazed by the precipitation, as he charged out of the gate and down the track in run one while Roczen cautiously hopped down the lane. The second race was a bit closer, with Roczen upping his intensity, but Musquin was unstoppable. The Red Bull KTM rider was again unbeaten in every match and earned the overall win, his first on a two-stroke. 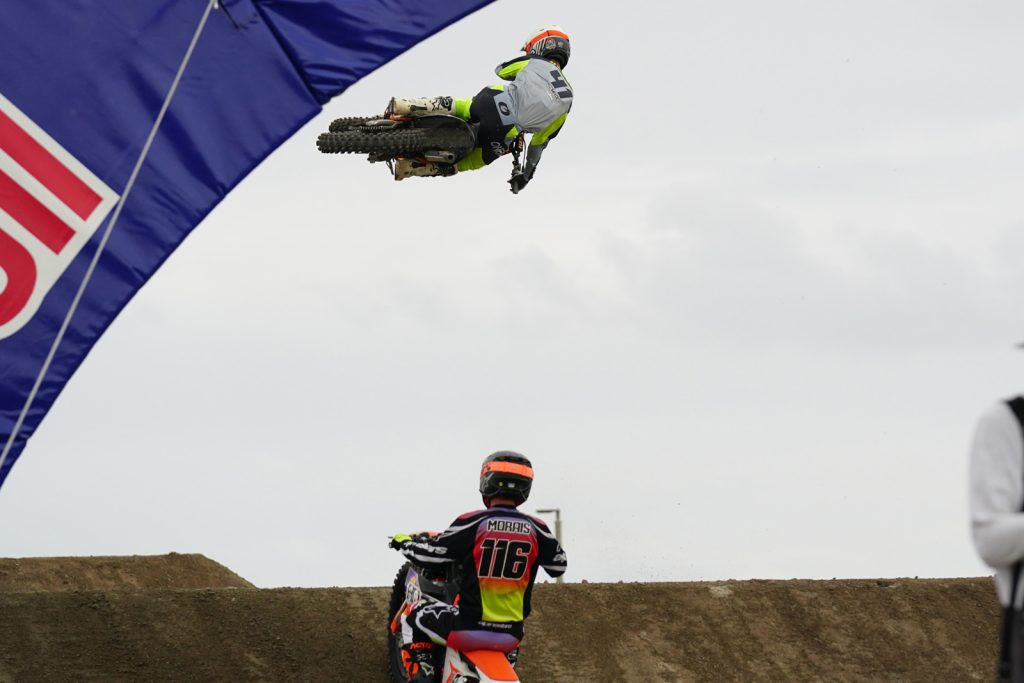 Varize was on the move from the moment the gate dropped in both runs and he earned both wins in a convincing manner.

The whoops were the deciding factor in this match-up. Morais had the early launch in race one, Catanzaro drew even halfway down the track and did a superman over the 80-footer, but Morais pulled back ahead over the rollers. Race two wasn’t as clean for Morais, as a few early mistakes let Catanzaro pull ahead, but the KTM test rider hammered the whoops and won by a wheel.

The big jump in the middle was a challenge for everyone, but especially the 125 Class. Some mistakes by Kelley leading up the face caused him to back out at the last minute and allowed Thury a clear run to the checkered. Kelley fired back in run two by hucking the leap, grabbing the win, and forcing a third round. The tabletop was the deciding factor in the third run, too, but this time it was Thury who didn’t make it while Kelley kept it pinned for the win and went to the next round.

Brown, a past winner at the RBSR and expert on premix burning bikes, bested British rider Woodcock in two runs.

This was a race of opposites, with one rider being a 39-year-old father and the other a 19-year-old up and comer, both of whom used different rhythms to get down the track. Varize earned the W in race one, but a big case and spin out allowed Morais get the win and even the score. The third run came down to the final sector of the track, where mistakes by Morais were what Varize needed for the win.

Brown controlled both races from the very start, and although Kelley was noticeable quicker in certain areas, it wasn’t enough to get ahead. Two wins by Brown advanced him to the final round and put Kelley in the bronze medal match.

Run one in this matchup was wild from start to finish, as a botched jump by Kelley put Morais ahead and mistake by Morais allowed Kelley the chance to close back in. This one came down to the whoops, where Morais bombed over the tops to get the win. Run two was all Kelley, and it forced a tiebreaker, where Kelley cleared the big jump with ease and earned the win/third place.

Quick reactions by Varize in run one put him ahead until they hit the first rhythm, where Brown went three-three and pulled ahead for the win. Run two was decided a little earlier, as Brown was able to wheel-tap through the very first obstacles, race ahead, and take the win.