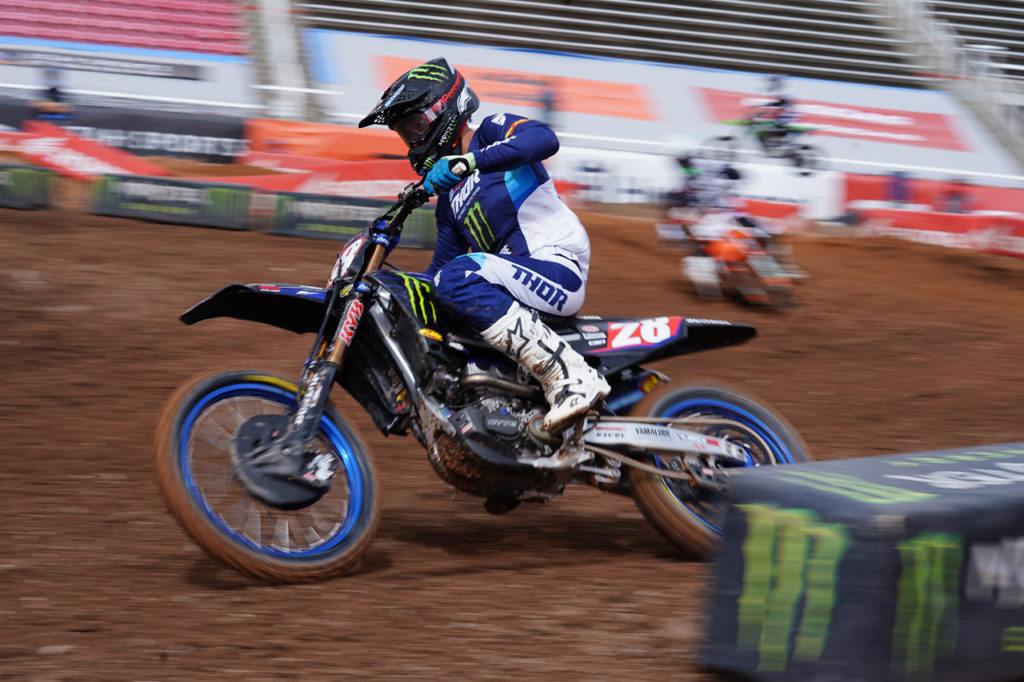 The Monster Energy Supercross Championship continues to wind down, as riders spent the afternoon at the 2022 Salt Lake City Supercross learning the obstacle-packed track built inside Rice-Eccles Stadium. Getting through this weekend without issue is the goal for all, but the prospect of a season-best finish in the 450 Main Event or 250 East-West Showdown is enough for some to push the limits. Here’s what happened during the final Timed Qualifying sessions of the season… 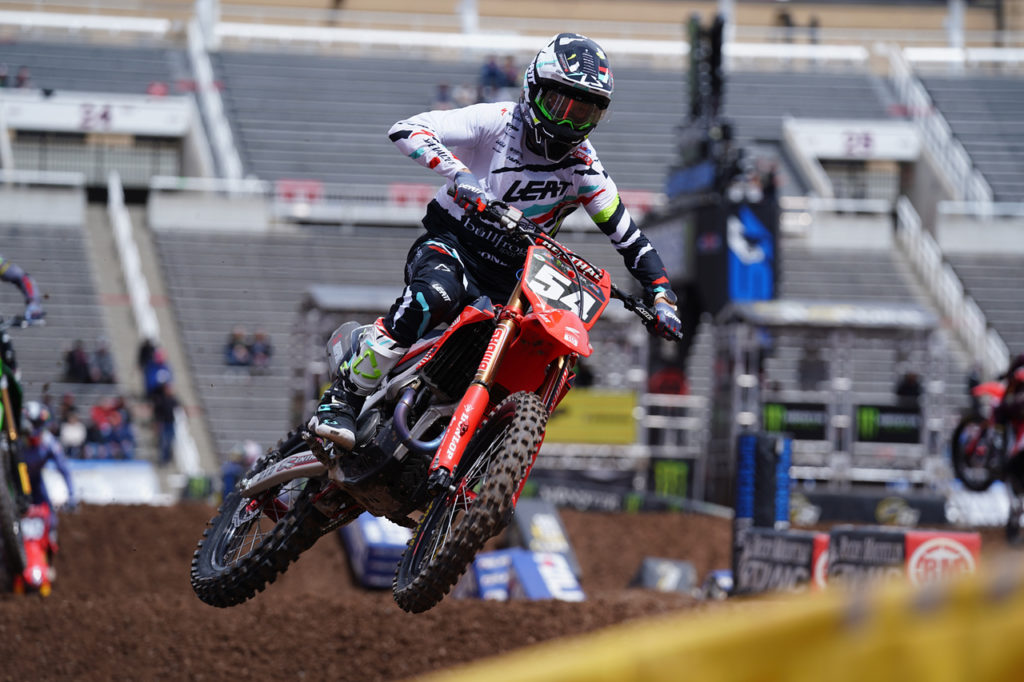 Jett Lawrence’s weekend came to an early end after the Team Honda HRC rider suffered a tweaked ankle from a hard slam in the first Timed Qualifying session. Interestingly enough, Lawrence’s announced absence may have an impact on the West Region championship, as he will no longer be of aid to brother Hunter in the points-paying finale.

Mitchell Oldenburg put in a self-described perfect lap in the waning moments of the 250 East Region’s last practice and the Smartop/Bullfrog Spas/MotoConcepts/Honda rider’s 47.667 run was the best lap of the combined field. This is the second time that Oldenburg has entered the Showdown as the fastest rider of the afternoon; his prior pole was the 2019 Las Vegas Supercross.

Christian Craig is staking his claim in the 250 West Region. The incoming championship leader piloted his Monster Energy/Star Racing/Yamaha to a 47.789 lap just as time expired in the final practice; it was the second-best lap of the two regions.

Team Honda HRC’s Hunter Lawrence was the first small-bore rider to break into the 47-second range, an exact time of 47.998 that put him third overall in the combined field and second in the 250 West Region.

CLUBMX Yamaha’s Enzo Lopes was one of the afternoon’s standouts. The rider logged a 48.042 in the first session for the 250 East Region, a time that held up through the rest of the afternoon and put him fourth overall in the results. 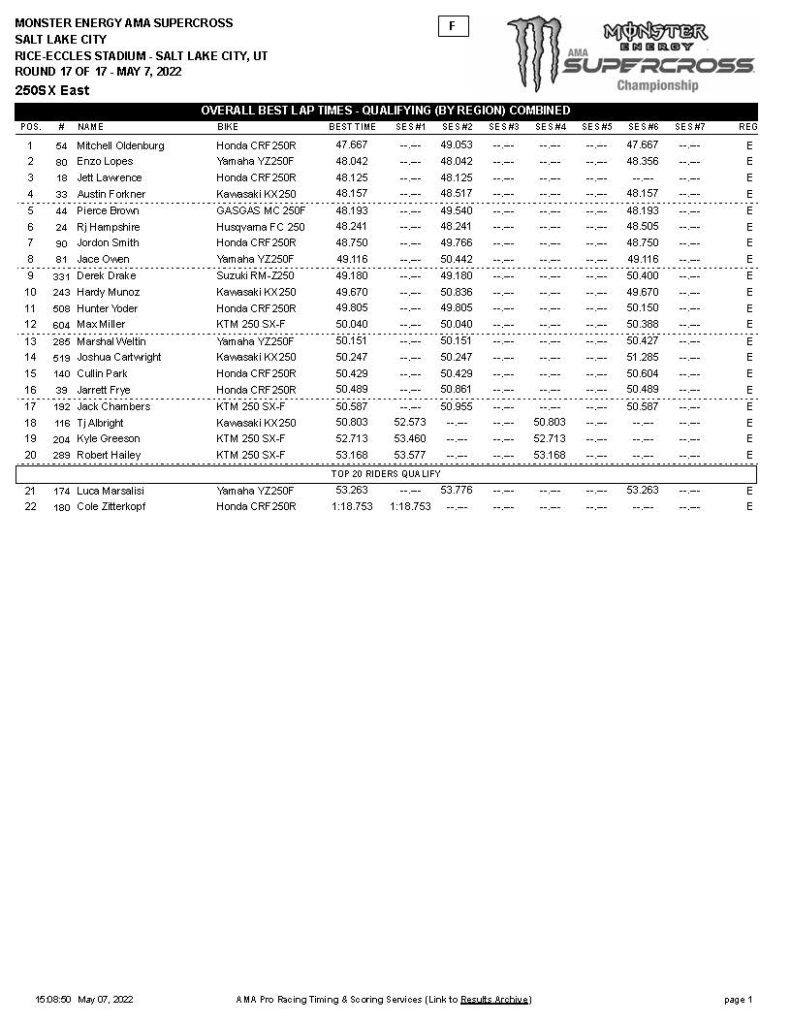 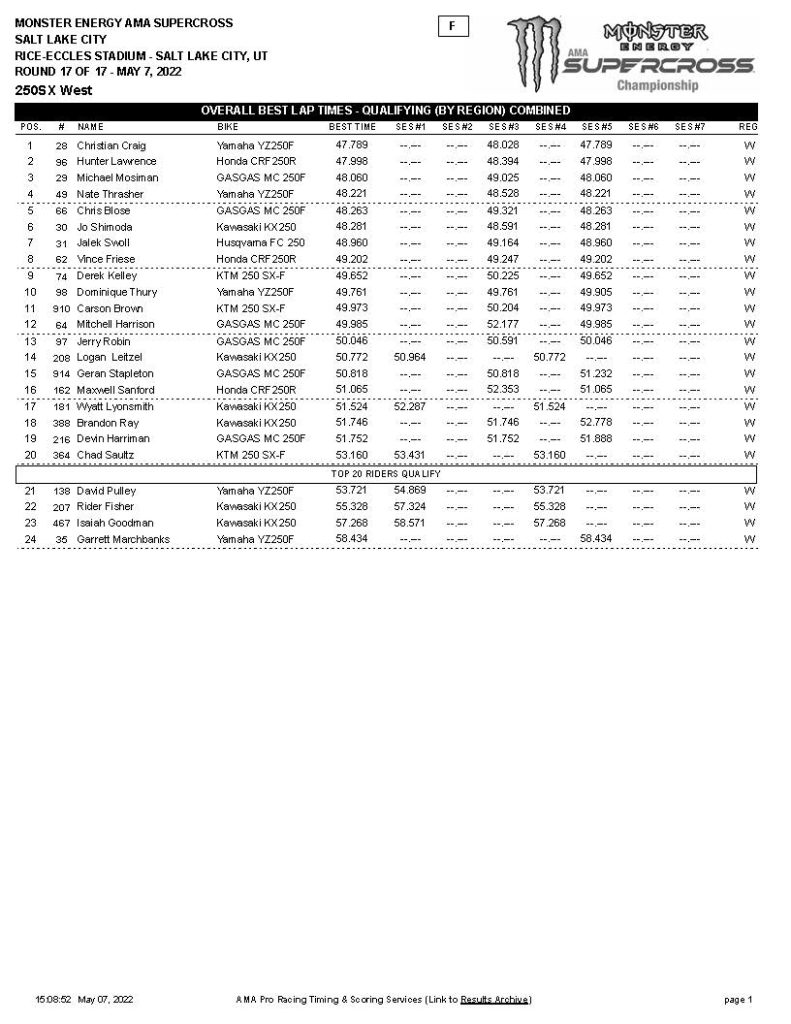 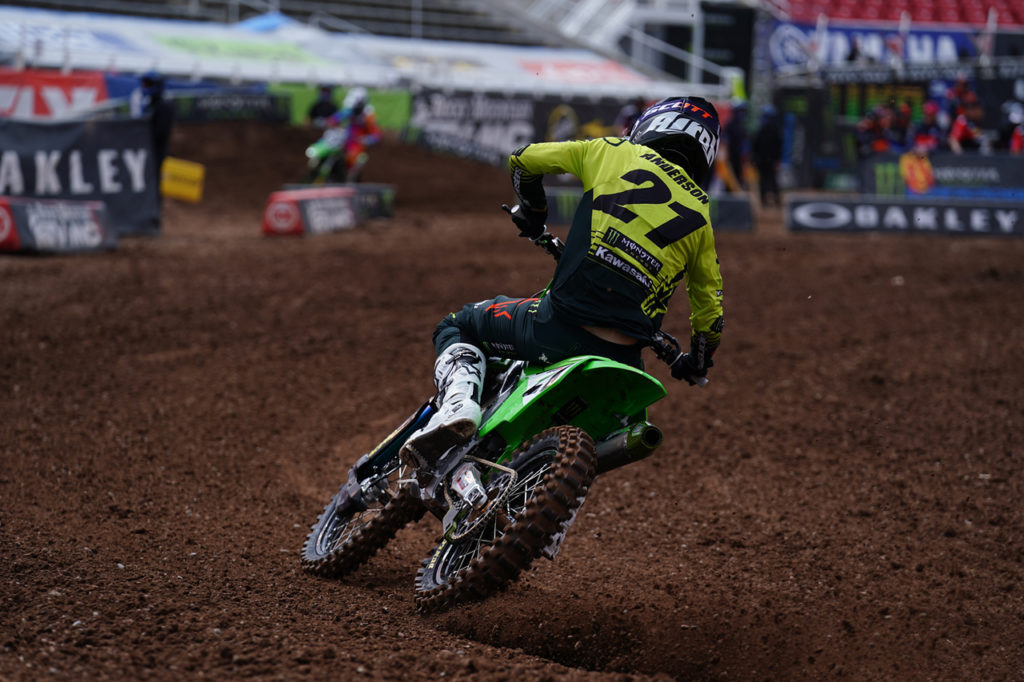 It was exciting to watch 450 Class find their form in the final Timed Qualifying session of a long SX season, as five riders found the fast lines, clicked off their personal-best laps, and all ended up in the 46-second range.

Monster Energy Kawasaki’s Jason Anderson put in a series of heaters late in the day. A 46.608 run on lap eight would have been enough for Anderson to claim P1, but he regrouped, found clear track for a late-session push, and clocked an impressive 46.187 on lap 10.

Marvin Musquin raced the clock a few times in the final practice and put in a handful of 46-second laps, with a 46.629 being the Red Bull KTM rider’s best.

Chase Sexton was very consistent in the final practice. The Team Honda HRC rider’s two best times were a 46.636 on lap 12 and a 46.669 on lap 10; he was listed third overall on the scoring sheets.

A crash in the first minutes of the final practice didn’t seem to faze Malcolm Stewart or hurt his Rockstar Energy Husqvarna Factory Racing motorcycle, because he put in a 46.808 lap later in the session, enough for fourth overall.

Justin Barcia was the last person to break into the 46-second range. The Troy Lee Designs/Red Bull/GASGAS Factory Racing rider held fifth overall for almost all of the session, but was more than a second off the front-runners. That changed on lap eight, when he rushed to a 46.972 time. 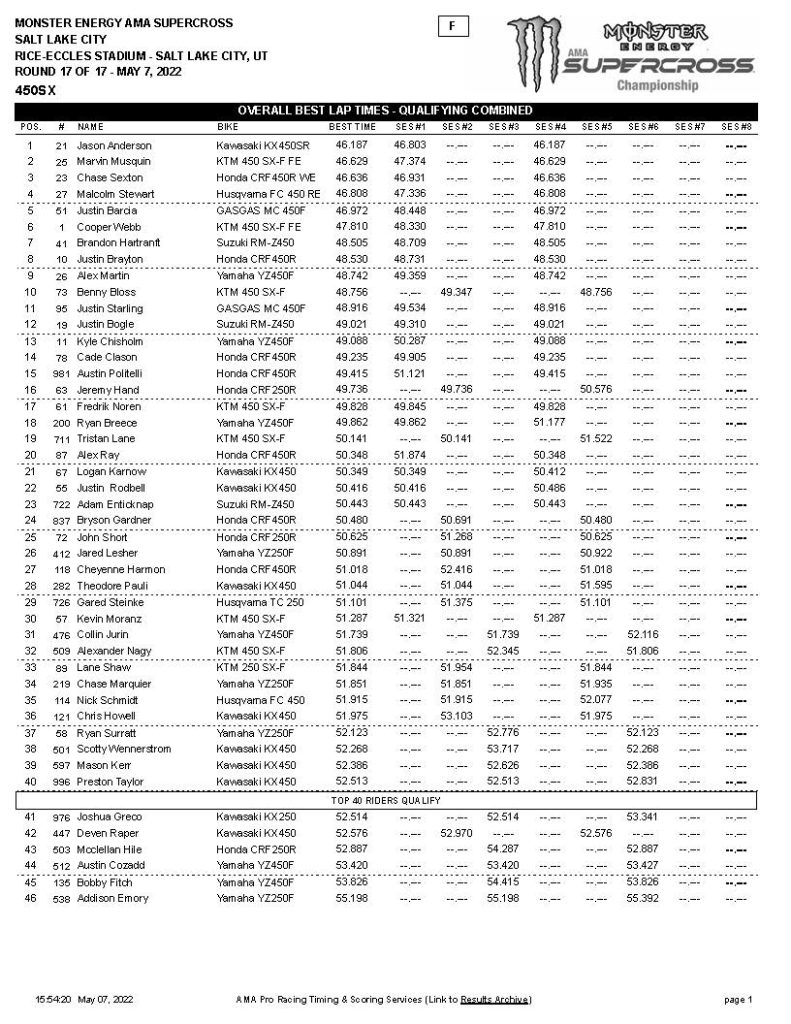