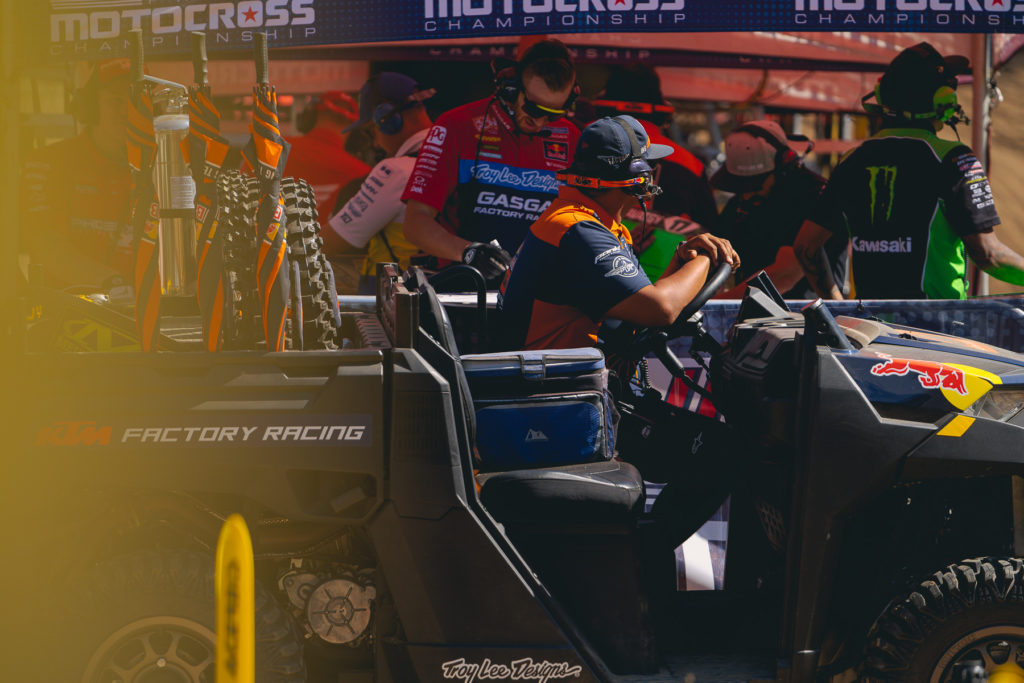 CHECK OUT OUR COMPLETE COVERAGE OF THE 2022 SOUTHWICK MOTOCROSS

There’s no place on the Pro Motocross calendar like Southwick. The track, nestled on the edge of the small Northeast town, is widely considered by riders to be the most physically demanding one that they race on all summer, and fans pack around the sand pit to see the sport’s best do battle against the local talent, which is working class guys from Connecticut/Massachusetts/New Jersey/New York.

Cut to size. Jed Rodriguez likes to place the sponsor stickers individually and in the proper positions on the rear fender of Jalek Swoll's Rockstar Energy Husqvarna Factory Racing bike. Taking time to do the task shaves a few grams off the bike's total weight, especially when paired with pieces like titanium/aluminum hardware or feathery light seat foam, and looks trick.

Mesh gear is appropriate for Southwick. FLY Racing dressed their riders in a limited edition style of Kinetic Mesh line, a brightly colored kit that was impossible to miss. The Boise brand will debut its 2023 line later in the summer at Unadilla.

It wouldn't be Southwick without a Luke Renzland sighting. The privateer was again on a two-stroke, a Husqvarna TC250 this time, and cut laps during the morning's A Group practice sessions.

Aaron Plessinger was way off the pace in practice. A 2:14.984 lap in the first session put AP in 23rd in the A Group, but 25th when combined with the B Group. The Red Bull KTM rider was 1.189-seconds faster in the second session, a significant improvement that only boosted him to 19th overall.

The switch. Hunter's Honda looked good with the red plate and MotoGP-Esque font, but we were also very keen on Jett's black background with the number one.

Hannah Hodges signed up in the 250 Class at Southwick. The WMX rider made use of the Pro Sport amateur rule, as she'll line up at Loretta's in August.

Ty Masterpool backed up his RedBud result with another good ride at Southwick. The privateer kept all but the necessary stickers off the KTM 250 SX-F, then rallied back from subpar starts for 14-11 finishes and 13th overall.

On Friday, Alex Martin announced that this summer will be his last as a professional motocross racer. Al's 15-year career is quite remarkable, as he went from barely-paid privateer to factory rider with a handful of moto wins and podiums on his record. We got a chance to chat with the ClubMX rider for a Checking In With interview, a feature you can find under the "Theater" tab at the top of the page.

Team Honda HRC has been a force this summer. Altogether, the four red riders have won 13 motos, claimed seven overalls victories, stood on the podium 36 times, and have led both championships since the opening round.

Monster Energy/Star Racing/Yamaha has a unique outlook when it comes to race-day washes: don't. The team still cleans off their bikes between sessions on the track but prefers to hit critical areas with chemicals, brushes, and compressed air instead of high-power water, which could cause issues to the electronic systems.

Jason Anderson and Alex Martin spent most of Moto One together. The two were caught up in the first-turn crash, remounted a few places better than last, and battled each other for sixteen laps as they worked their way forward. Anderson got back to eighth place while Martin finished in 14th.

It was cool to see Chris Canning, a Connecticut native and Southwick regular, up front and in the mix with the best in the 450 Class. Local knowledge helped Canning turn a 2:10.198, an impressive lap that he did during the first A Group session that put him sixth in the Timed Qualifying results, while 12-12 results during the afternoon's motos earned him 11th overall.

How many 450 MX Moto Wins are in this photo? Look closely. We'll have the answer, with Southwick's results factored in, at the bottom of the page.

Ken Roczen's early race intensity is remarkable. The Team Honda HRC rider rocketed to the front in both motos and added nine more laps to his stat line, which now stands at 60 total. Roczen is still sorting out some issues with himself and the CRF450R, which was cited as the reason for the "drop off" to 6-4 finishes and fourth overall. His father, Heiko Klepka, was in the pits at Southwick.

Eli Tomac's speed up the rollers was something else. Alex Martin said that he could hear ET3 behind him in Moto Two and that he was revving the YZ450F harder and for longer than Martin thought was possible. We can vouch for that because we stopped shooting for a few laps in Moto Two to watch it happen.

Justin Barcia was surprisingly off at Southwick. The 13-9 finishes came as a shock to the Troy Lee Designs/Red Bull/GASGAS Factory Racing team and rider, but they commented to us that the track felt "different" than years past, possibly due to dry weather in the usually humid area.

We hope NBC has some footage of the Anstie-Roczen last-lap battle in 450 Moto One, because seeing the two Europeans go at it in the sand for fifth place was something. The two stayed side-by-side over this single and the following tabletop, but Anstie's inside line gave him the upperhand, and he ended the battle with a blockpass in the next turn.

Is a cooling vest part of your gear bag? A handful of riders chilled on the starting line, a feat under the scorching sun, with pieces like this from Alpinestars and FLY Racing.

Hollywood Hill. Fox Racing flew Jimmy Hill out to Southwick so that he could chat with riders and commentate on the scene for a quick video. Search "Fox Racing Mic'd Up" on YouTube to give it a watch.

Jett Lawrence's Moto One tip-over happened right in front of us. The early leader rider washed the front-end in the flat turn before the finish line, a sand track mistake that allowed Justin Cooper a shot at the top spot. The duel that followed, though exciting, didn't last long, and Lawrence was back in first by the next lap through the section.

RJ Hampshire was on the gas, as expected, at Southwick. The Rockstar Energy Husqvarna Factory Racing put his sand skills to use in Moto One, as he started in fourth, passed to third, closed in on the leaders with a charge midway through, then slid back to fourth after issues in the closing laps. Hampshire's 4-5 finishes were his best of the season so far and put him fifth overall.

Honest question: Even with the boots, how packed can a sand pad get?

Jason Anderson's loose riding style and Monster Energy Kawasaki KX450 looked good at Southwick. JA21 found a second on the track between practice sessions for a third-place rank in Timed Qualifying, passed a lot of riders on his way to eighth in Moto One, followed it up with a sixth in Moto Two, and got eighth overall.

Kevin Moranz's weekend crew was a local family who wanted to help the Kansas privateer in any way they could, which included a hand with bike work during the races so Moranz could recharge, a room at their house for the week, and a car to drive around town.

Shane McElrath told us that he still isn't sure how much longer he'll be a fill-in at Rockstar Energy Husqvarna Factory Racing, as Dean Wilson and Malcolm Stewart are both riding again and hope to line up before the end of the summer. This is a bit surprising, considering McElrath is Husqvarna's only rider in the top-10, but we've also heard that staffing and part shortages for the new bike would make it hard to field three FC 450s.

What if they could do the whole track between motos? Yeah, that's impossible, but just think about four motos with riders ripping on a course that's perfectly prepped at the gate drop and hammered only a fair bit by the checkered flag.

Sand tire. Scoop tire. Paddle tire. It doesn't matter what you call it; a V-tread rear is a must at Southwick. If you need new rear rubber, Dunlop just debuted the MX14 tire, designed specifically for deep sand and available in all common sizes.

Justin Cooper's switch to stock parts on his YZ250F has been a big topic this summer, so we asked him about it after Southwick. You can hear the Monster Energy/Star Racing/Yamaha rider's exact explanation by watching How Was Your Weekend, but essentially, he is trying to ride the bike more efficiently and not "bulldog" it as much as he did in 2021. Yes, the injury is playing a part in the decision, and yes, he can go back to last year's setup if he wants, but for now, he's committed to trying this package.

Stilez Robertson took full blame for the Moto One incident between him and Hunter Lawrence, a cross-jump that was accidental but common at the sand track. The post-race exchange was heated and carried over to the rigs, but Robertson said nothing more was said on the line in Moto Two or at the end of the day.

Halfway through. Hard to believe it.

2022 Washougal Motocross | How Was Your Weekend
Michael Antonovich July 24, 2022

2022 Washougal Motocross | How Was Your Weekend