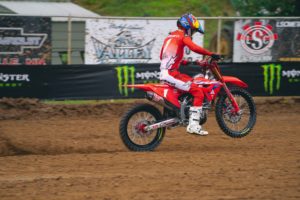 The Lucas Oil Pro Motocross Championship is in Millville, Minnesota for round seven of the series, the 2022 Spring Creek Motocross. The day in Millville began with overcast skies and arguably perfect weather conditions, adding to the anticipation for what most riders claim as their favorite race track in the championship. Riders cut in lines during the morning’s practices, when the track was at its best during the early minutes of the first sessions. 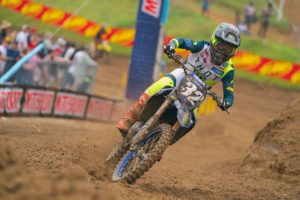 Justin Cooper was the man to beat in the early hours at Spring Creek, the Monster Energy/Star Racing/Yamaha rider topped the charts in both sessions of qualifying. After setting a blistering fast 2:08.584 in the first session of riding, which ultimately stood as the fastest lap time, Justin put in a last lap heater in the final practice to top that session as well.

Jett Lawrence also put together a fast last lap in the final session of qualifying, though it wasn’t enough to take pole position. The 250MX championship points leader ended up in second place with a 2:10.115 as his fastest lap logged.

Hunter Lawrence was the next name on the overall results from 250MX timed qualifying, as his 2:10.708 logged late in the final session of qualifying jumped him up the list a few positions. Though, this might be the largest gap we’ve seen this season between first and third in qualifying, as Hunter’s fastest lap time is over two-seconds slower than the fastest lap time logged by Justin Cooper. 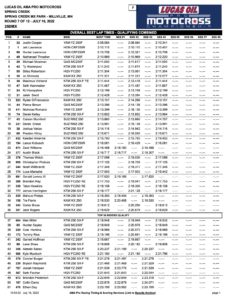 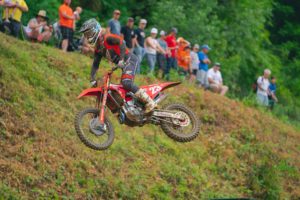 Prior to the final session of 450MX qualifying, the track crew prepped a few sections and even changed a part of the track to speed up the lap times. Chase Sexton took advantage of the fresh track in certain sections and logged a blistering fast 2:06.351 early in the final session of qualifying. That time ultimately stood as the fastest lap time logged in the 450MX class.

Honda HRC teammate Ken Roczen was next on the time sheets, as his 2:06.513 logged in the second session of qualifying was just a tick off of Sexton’s best lap. 2022 Spring Creek was off to a good start for the Honda teammates, as they logged lap times nearly 2-seconds faster than the rest of the class.

Jason Anderson was next on the list, as his 2:08.220 was a few hundredths faster than Eli Tomac’s best lap time. We have to mention that the Monster Energy Kawasaki rider and Eli shared some aggressive racing for a lap in the final session, an odd sight in qualifying. 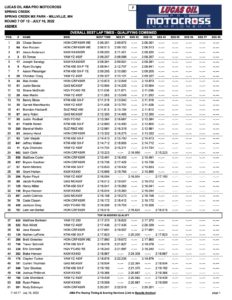