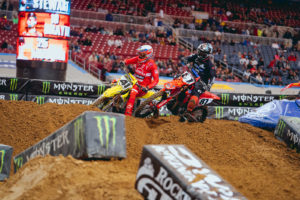 CHECK OUT OUR COMPLETE COVERAGE OF THE 2022 ST. LOUIS SUPERCROSS

After a weekend off, the 2022 Monster Energy Supercross series is set to resume in St. Louis, Missouri for round thirteen. Riders spent Saturday morning learning the track that fills the center of The Dome at America’s Center, and to no surprise, the lap times are incredibly close. The front-runners in the 250 East Coast and 450 Class were split by just fractions of a second on the qualifying sheets, building the anticipation for tonight’s gate drops even more! 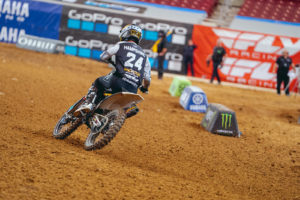 The track was considerably slower in the second session of qualifying, leading to RJ Hampshire’s 53.630 logged in the first session claiming the top spot on the leaderboards. Though, the Rockstar Energy Husqvarna rider’s fast lap in the final riding session was second to Jett’s time.

250 East Coast championship points leader Jett Lawrence found his name in second place overall on the time sheets with a 53.996. Though, he logged the fastest lap time in the second and final session of qualifying, just on a slower course.

Monster Energy/Star Racing/Yamaha fill-in Kyle Chisholm was next on the leaderboards, as his 54.104 logged in the first timed qualifying session earned him the third place ranking. However, Kyle would have ended up in second place overall, but his fastest lap time was taken away after jumping on a red cross flag.

Oldenburg and Varize connected mid-air in the beginning of the second session, throwing Mitchell to the ground and Varize off track. Both remounted and seemed unharmed, but Mitchell expressed frustration with Joshua.

Jack Chambers snagged the holeshot and the early lead in the 250 East Coast LCQ, followed by Jon Short. Maximus Vohland was off to a horrible start and came around the finish line in 20th place on the first lap. Short went for the lead on the second lap, but backed out last minute and ended up going down. Alves then took over the second place position. Derek Drake made the pass on Short for the final transfer position and then made another quick pass on Munoz. Short and Munoz then began to battle over the final transfer spot. Hardy then went down while in the fourth place spot and allowed short to make it back by. On the final lap, Munoz went for the pass but nearly went down again. Chambers took the LCQ win, followed by Drake, Alves, and Short. 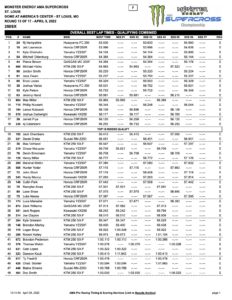 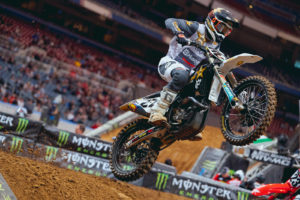 Malcolm Stewart was, again, the fastest rider on track in timed qualifying, as the Rockstar Energy Husqvarna ride logged a 53.102 in the first timed session. Which, thanks to a slower track in the second session, remained the fastest lap time for the entirety of qualifying.

RedBull KTM’s Marvin Musquin found his name in second place on the leaderboards after logging a 53.131 in the first timed qualifying session.

Monster Energy Kawasaki’s Jason Anderson followed closely behind in third place, after logging a 53.180 in the first session of timed qualifying, just a few tenths slower than Marvin’s time.

Justin Rodbell snagged the holeshot and was off to the early lead after cutting across the inside of the first turn. Pauli went down while running in third place and caught up a few riders. Alex Ray ran in second place and was giving chase to Rodbell, while Kevin Moranz held off Deven Raper. Adam Enticknap made a pass on Joan Cros and Kevin Moranz, as both of them had their separate issues in the sand section. Adam then made the pass for third place on Raper after a solid run through the whoops. On the final lap, Cros cut from the far outside to the inside line going into the sand and connected with Raper’s front wheel, putting Deven on the ground. Rodbell took the LCQ win, followed by Ray, Enticknap, and Cros. 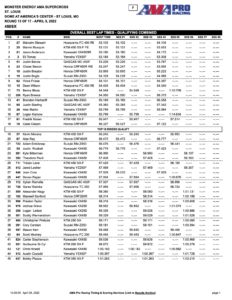 2022 St. Louis Supercross | How Was Your Weekend