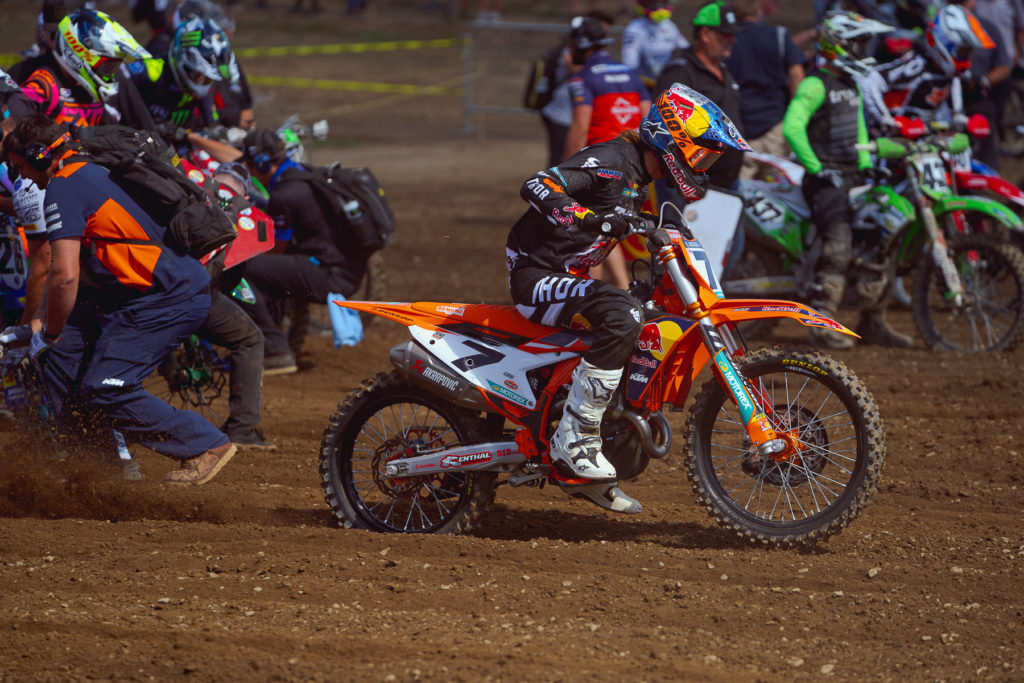 Things are winding down for the summer. After a much-needed break, riders and teams returned to the starting line for ninth race of the Lucas Oil Pro Motocross Championship, the 2022 Unadilla Motocross. The New York rounds is one of the most iconic on the entire schedule, as it’s one of the only tracks to see the sport go through tremendous changes without losing much of the original flow or layout, but this year’s running was done with heavy hearts following the passing of owner Ward Robinson.

Revved up four-stroke in the morning fog. Saturday's practice was Nick Romano's first laps on Unadilla's main track, a moment he made the most of by being the last rider to dump the clutch and round the first turn on his Monster Energy/Star Racing/Yamaha.

A tough week at Loretta's and a schedule of events like Moto Combines/SX Futures are why many young riders opted against going to Unadilla. Ryder DiFrancesco wasn't going to change his plan, though, and he returned to his post under the Monster Energy/Pro Circuit/Kawasaki rig for his third National of the summer/first of his proper pro career. Contact with a huge flying rock in Moto Two left Ryder D with a sore arm and will sideline him for Budds Creek.

The track prep was the talk of the weekend, as a light rip with little watering made the topsoil dry, loose, and fast. This shot of Austin Black was from the first session of Timed Qualifying.

A handful of factory riders, including Cameron McAdoo, used the New York race as their return to competition. The Monster Energy/Pro Circuit/Kawasaki rider's summer came to an abrupt end one lap into the opening round, but constant training with Nick Wey and a renewed contract at PC for 2023 served as a good motivator, and he went 11-4 for eighth.

Speaking of new deals, it sounds RJ Hampshire is back with Rockstar Energy Husqvarna Factory Racing for another year. Hampshire's 3-8 finishes put him fifth overall, and he holds a five-point advantage over Max Vohland for fifth in the championship standings.

We keep hearing that Ken Roczen hasn't put pen to paper on a new contract, but every time we think about where the multi-time champion could go, his tenure with Red Bull comes to mind. Could he leave one of his longest, biggest sponsors for an opportunity to ride a different brand of motorcycle? Or will KR94 go the other way and form a team of his own?

Roczen has tried lots of parts and pieces on his CRF450R this year in a never-ending hunt for the perfect bike, but then said that he and Team Honda HRC went back to their 2021 setup for Unadilla's practice session. It worked for a while, as Roczen's Session One time was the fastest of the morning.

The infield pond showed how little rain upstate NY has gotten recently. We were told the track crew expected wet weather early in the week, as a soaking storm would have helped tremendously, but it never came through. So, that's drier than usual weekends at Thunder Valley-Southwick-Spring Creek-Washougal-Unadilla, half of the races run so far this season.

We were interested in how the course developed amid the conditions. A handful of riders told us there were very few ruts and lines compared to a usual Unadilla, but uh, we see plenty here.

Muc-Off/FXR/ClubMX is setting their lineup for 2023, which will again include Garrett Marchbanks. A summer on the YZ450F has helped Marchbanks figure out his size and the speed of the premier class, evident in his 8-17 run to twelfth place, and it sounds like he could stay on the big bike for a few rounds of SX.

We met Justin Cokinos last summer at Loretta Lynn's, when the Massachusetts rider claimed the College title and finished fourteenth in Open Pro Sport. It was cool to see Cokinos on the line at Unadilla, his third National of the summer, and he went 33-26 for twenty-ninth. Fun fact: he posted the same score at Spring Creek and has finished 26th all three times he has lined up for Moto Two (Southwick, Spring Creek, Unadilla).

Christain Craig took a hell of a hit in the morning practice, but the Monster Energy/Star Racing/Yamaha rider shook it off, went 11-9, and finished tenth overall. Considering the circumstances, this was a significant result for CC, as he's currently fifth overall in the 450 championship and nine points ahead of Ryan Dungey.

It looks like that practice start paid off for Nick Romano.

MXON consideration motivated Justin Cooper and Christain Craig during the two-week break. We were told the Star Racing riders went tit-for-tat during practice motos on their YZ250Fs, as Craig showed speed on the small-bore bike and Cooper made improvements when prompted. Team USA will be announced on Saturday at Budds Creek, with Cooper currently considered the favorite for MX2.

Max Vohland is getting the hang of things, and right on time, too. The Red Bull KTM rider finished in the top ten through the last six motos, a run that has put the teenager within five points of RJ Hampshire in the championship standings and should boost his confidence ahead of 2023.

Jo on the go. The Monster Energy/Pro Circuit/Kawasaki rider earned his second overall of the summer at Unadilla with a Moto One win and a strong third place result in Moto Two. Things are getting interesting in the 250 Class as the season winds down, as Unadilla's swing in results put Shimoda within fourteen points of second-ranked Hunter Lawrence.

Jett Lawrence's high-speed high-side was nasty to see through the viewfinder. The front-end of the CRF250R tucked during Lawrence's rip through the pack, a mistake that sent him tumbling onto the water truck road, some fifteen feet away from the bike. Fortunately, the Team Honda HRC rider was on his feet in an instant, rejoined the race, and finished seventh in 250 Moto One.

Tyler Stepek's helmet isn't like others on the starting line. The Maryland rider hired Japanese artist Colors Designs to lay paint to an Arai shell and was happy to hear that he didn't need to send a lid overseas to start the process, but didn't know that there are subtle differences between the handmade helmets' US and Asian fits. No stress, though, as Stepek shaved the interior liner down to fit better.

If Josh Gilbert had SX skills, he'd be rider for a US team in 2023. The UK racer's limited engagement in the states has been very impressive, evident in his 12-14-40-39-18-20-15-12 scores through eight motos and battles with guys like Alex Martin and Dean Wilson.

Good to the last drop.

Lap One. Not going to lie, we were having flashbacks of Unadilla 2021 when these two came out of Screw U side by side. It hasn't been the summer either expected, as Ferrandis never got the chance to defend his title and Roczen has struggled with more health issues, but both showed they're still among the fastest on two-wheels when things line up.

Did anyone else think that Eli Tomac would be untouchable in Moto One? ET3's early intensity put him far ahead of the pack at a track that's widely known for not being his favorite, and moves like this, on the pegs and the gas through a tricky rut, made it seem like a win was on the way.

Mousses were standard-issue for nearly every rider at Unadilla, as the foam inserts prevented flats but added some weight to the spinning rear wheel. The Dunlop crew made the installation process seem easy between motos on Saturday afternoon.

There were still lots of ruts at Unadilla. The trenches weren't miles long or engine case deep like usual, but they ran from the landing of one jump to the takeoff of the next.

Speaking of Hunter, although we didn't get an official answer on what went wrong with his CRF250R, it's fair to assume that one of Unadilla's many rocks found a way in between the frame rail and rear brake pedal, as the drag on the disc and strain on the engine could feel like a mechanical issue. He was able to overcome the problem and push to 2-5 finishes for third.

Jorgen Talviku was a big surprise in the 250 Class. The Estonian lined up at Unadilla on a Husqvarna, went 17-17, and ended the day seventeenth overall. Props to Munn Racing for their support of Talviku and Gilbert through the summer.

Take a tip from a Team Honda HRC mechanic's build book and cut a notch in the grip for the clutch lever.

What's hidden behind Hunter's number plate? A port that Honda techs plug a computer into for their post-race data download.

Shame there are only six motos left in this incredible championship battle. Who do you have winning the number one plate?

And the pass for the red plate. Sexton is now one ahead of Tomac.

Give Aaron Plessinger's HWYW a watch. The Red Bull KTM rider is always good for some end of day laughs mixed in with astute analysis of the race, and his Unadilla comments touched on the testing procedure he and the team are going through with the current generation KTM.

See you at Budds.