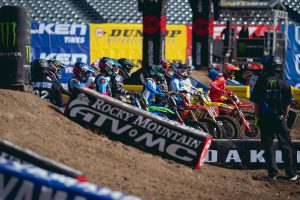 The 2023 Monster Energy Supercross Series is finally, officially underway. The fastest riders in the world spent Saturday afternoon learning the track that fills the floor of Angels Stadium, and to no surprise, the lap times are incredibly close. Southern California was showered with rain throughout the week leading up to Anaheim One, resulting in a technical race course that landed multiple riders on the ground in qualifying sessions. Though, just fractions of a second split the front-runners in the 250 West Coast and 450 Class on the qualifying sheets, which ratcheted up the anticipation for tonight’s first gate drop even more. 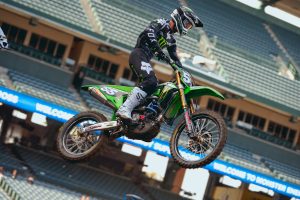 After laying down a blistering fast 1:00.595, Austin Forkner topped the leaderboards in the 250SX class early at Anaheim One. The Monster Energy/Pro Circuit/Kawasaki rider seemed to be flowing all day, as he topped the charts in free practice as well. By the end of the qualifying sessions, the track had been worked-in and the lap times dropped nearly 5-seconds, compared to when bikes first hit the track.

Jett Lawrence was just behind, as the 2022 250SX East Coast Champion logged a 1:00.635 late in the final session of qualifying. That lap time jumped the Honda HRC rider up into second place overall on the time sheets. Though, we will mention that Jett had a few tip-overs in earlier practices on the technical course.

Pierce Brown was next on the time sheets, as the Troy Lee Designs/RedBull/GasGas Factory Racing rider turned in a 1:00.706 in the final session of qualifying. Pierce seems to be jelling with his new generation GasGas, as he looked great throughout the afternoon and was just a few tenths off of the best lap time.

Stilez Robertson came out swinging in free practice, but was sent over the bars after a bad bounce through a rhythm lane. Luckily, the Monster Energy/Star Racing/Yamaha rider rejoined the course and ultimately qualified in ninth place overall. 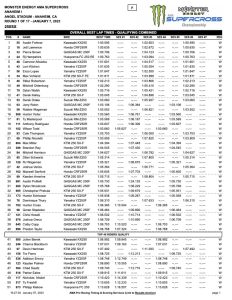 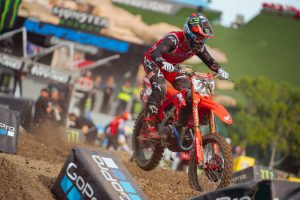 Chase Sexton is all business in 2023, as the Honda HRC rider topped the leaderboards in Anaheim with a blistering fast 59.785. Sexton was the only rider to dip below a 1-minute lap time and certainly is off to a great start in Angel Stadium.

Eli Tomac was just behind on the time sheets, as the reigning 450SX Champion laid down a 1:00.089 in the final session of qualifying. That said, it appears that Eli is feeling comfortable on his new Monster Energy/Star Racing/Yamaha YZ450F.

Marvin Musquin was the top rider from the Austrian group in timed qualifying, as the class veteran slid into third place on the leaderboards with a 1:00.497. The race course was quite a-bit faster in the final session of qualifying, but Marvin used his unique riding style to his advantage in the earlier sessions; as he topped the charts in the second practice.

Christian Craig was looking on-point in Anaheim until a hard crash in the whoops ended his final session of qualifying prematurely. We hope to see the Rockstar Energy Husqvarna rider back on track in the night show, but are unsure of his condition following the crash. 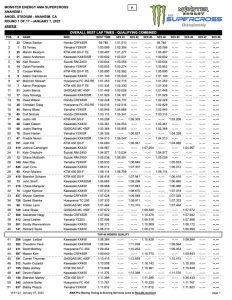