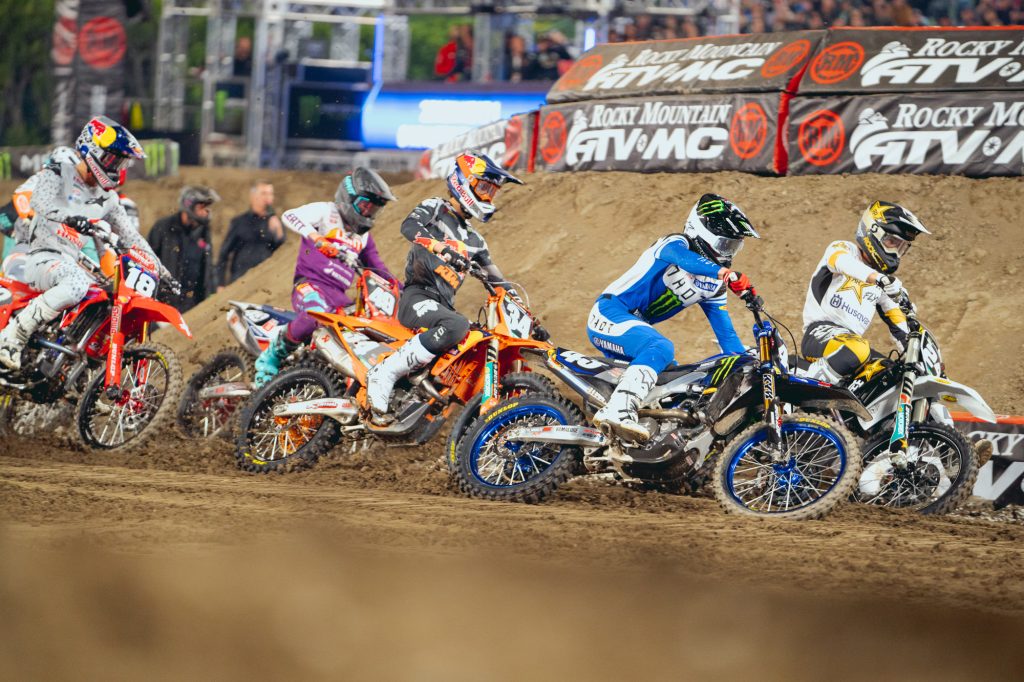 The 2023 Monster Energy Supercross Championship kicked off with an exciting night at its Southern California home in Angels Stadium. Riders in the 250 West Coast Region and 450 Class had to contend with each other and a challenging track through the night, with some saying it was the toughest A1 in recent memory.

The gate is down in Anaheim, as the first 250SX heat is off. After rocketing out of the gate, Rj Hampshire had the early jump on the rest of the field. Mitchell Oldenburg trailed Hampshire into the second corner, as Maximus Vohland and Jett Lawrence followed just behind. Jett Lawrence began searching inside of Vohland on the second lap, but then Oldenburg mis-timed a rhythm lane and fell back behind Maximus. Jett Lawrence then took Oldenburg wide to take over third place.

Maximus then fell victim to Jett, as Lawrence rocketed past over the tunnel jump and into second place. Levi Kitchen made the pass on Oldenburg for fourth place moments before Mitchell nearly went over the bars after a rear-wheel kick. Up front, Jett began to reel in Rj, as he cut the gap between Hampshire and himself in half.

Despite a late-race charge from Jett, Rj Hampshire managed to hold onto the lead and secure the heat race win in Anaheim. 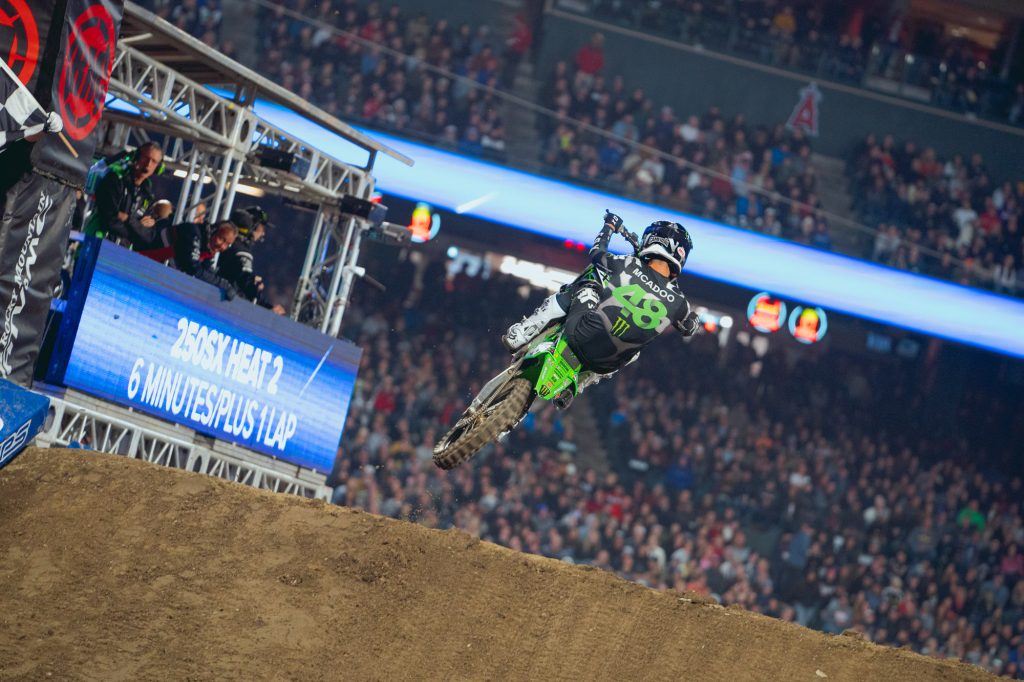 The second 250SX heat left the gate and Cameron McAdoo was off to the early lead, but Enzo Lopes made a quick pass before the second corner to take over the top spot. Pierce Brown got tanged with another bike in the first rhythm lane and went down hard, ending his heat. Privateer Dylan Walsh sat in third place with Derek Drake trailing.

Meanwhile, fastest qualifier Austin Forker was deep in the pack with a bad start. Wilson Todd got together with another rider in the whoops and went down hard, ending his night. Stilez Robertson entered the top-5 with a pass on Drake, but then laid it down and fell back to 8th. After a few laps of trailing, Cameron McAdoo took Enzo wide and made the pass for the lead.

Austin Forkner was on the move, as he passed Nicoletti for fifth place and set his sights on Drake, who he would ultimately pass. Forkner continued to charge towards the front and finished the heat race in third place after a bad start. Cameron McAdoo crossed the checkered flag just ahead of Enzo Lopes to secure the heat race victory.

The 250SX last chance qualifier was off and Ty Masterpool was off to the early lead with Hunter Schlosser just behind. Four riders got together in the second corner and went down, while Thury and Harrison were down in the first corner. Brandon Ray went down while running in third place and dropped to 13th place.

Jerry Robin made the pass on Schlosser for second place, a few laps before Sanford caught and passed Schlosser. Ty Masterpool then made a mistake, allowing the rest of the field to catch up to him. Sanford then took Masterpool down before the finish line.

Jerry Robin was now leading the LCQ with Sanford in tail. Rj Wageman was running in fourth place and tipped-over, allowing Hunter Cross to move into the final transfer position. Jerry Robin secured the LCQ win ahead of Sanford. 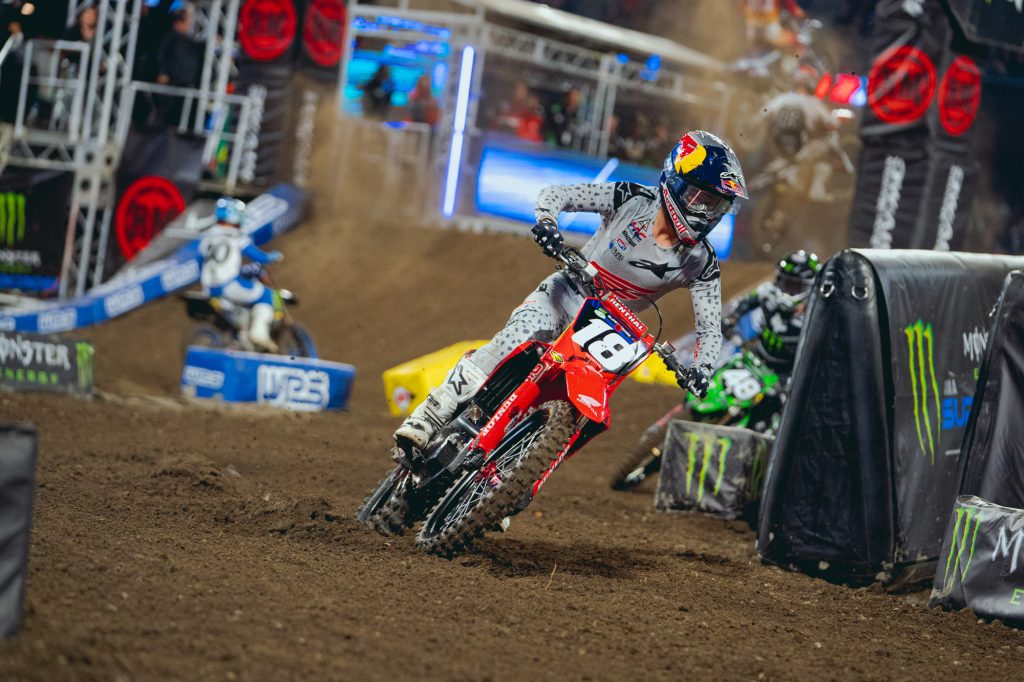 The 250SX main event was off, as Jett Lawrence led the rest of the field into the first turn. Austin Forkner got sideways entering the first corner and went down hard after flipping through the air. Cameron McAdoo sat in second place out of the first corner, followed by Maximus Vohland and Phil Nicoletti. Rj Hampshire made a pass on Phil for fourth place on the second lap.

Mitchell Oldenburg then made a pass on Nicoletti to enter the top-5. Moments later, Rj Hampshire made the pass on Vohland for third place. Enzo Lopes and Levi Kitchen were coming through the pack, as they locked onto Dylan Walsh, who snagged another great start and sat inside the top-10.

After a few laps, Jett Lawrence began to build a gap on McAdoo and the rest of the field. Mitchell Oldenburg reeled in Maximus Vohland, just as Enzo Lopes began to pressure Nicoletti. Enzo was the first to advance, as he jumped inside of his teammate to take over sixth place.

Late in the race, Rj Hampshire closed-in on McAdoo and found himself challenging for second place. Rj jumped to the inside of Cameron and made a clean pass to take over the spot. Mitchell Oldenburg also advanced, as he finally made the pass on Vohland for fourth place.

Jett Lawrence crossed the checkered flag to take the win at Anaheim One after a perfect start-to-finish race. 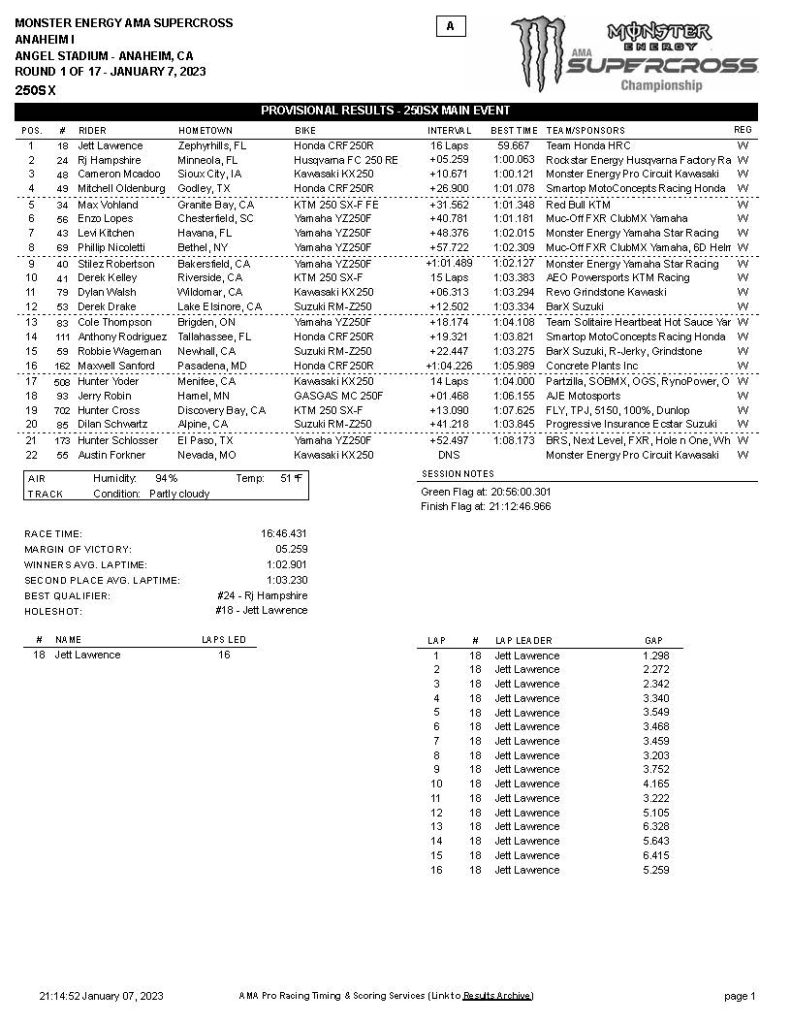 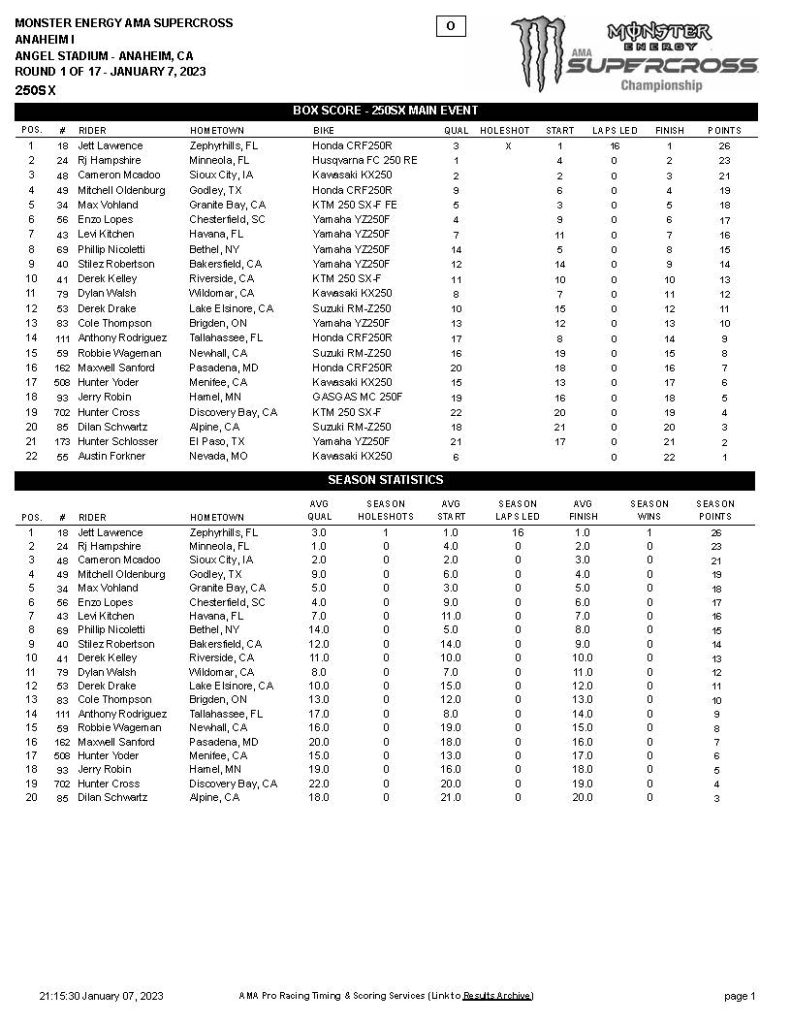 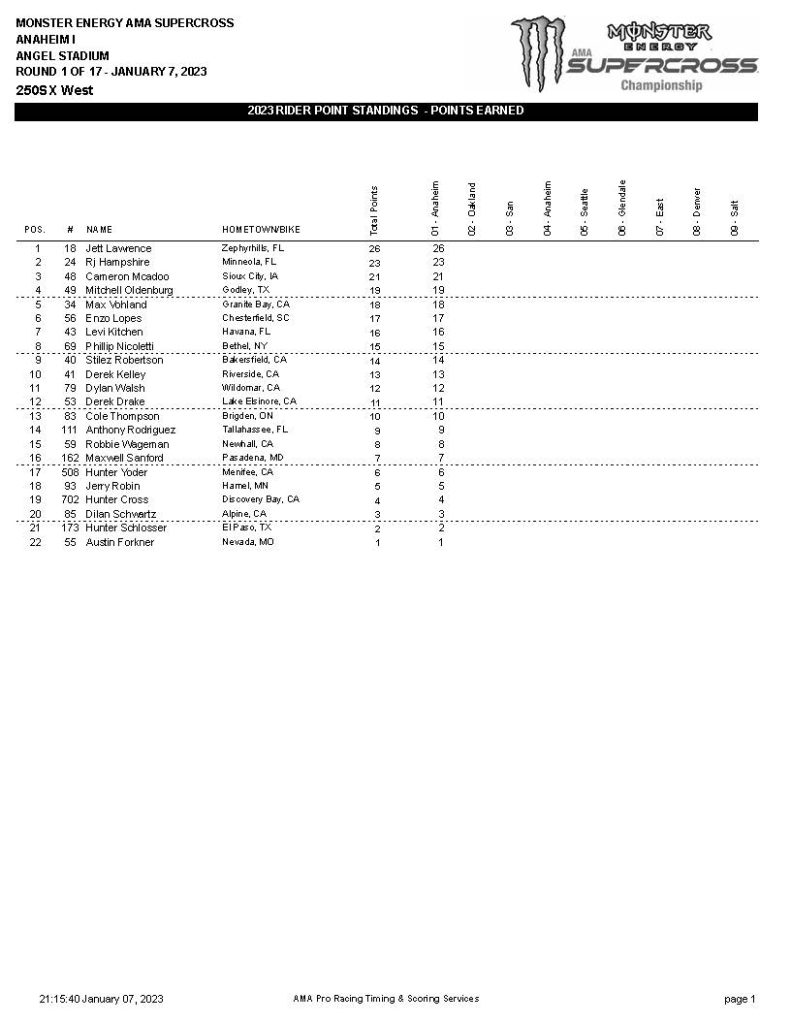 The first 450SX heat was off, as Eli Tomac led the field into the second corner. Dylan Ferrandis trailed behind his teammate, with Adam Cianciarulo and Jason Anderson in tail. Joey Savatgy then made a pass on Anderson for the fourth place spot. Christian Craig and Aaron Plessinger battled it out behind Colt Nichols over seventh place.

Plessinger made the pass on Craig and then set his sights on Nichols for sixth place. Jason Anderson beat Savatgy to a left-hander and retook fourth place, just before Plessinger secured fifth over Savatgy. Jason Anderson began to reel in Cianciarulo and looked inside of his teammate.

Jason then made a mistake, allowing Plessinger to challenge Anderson for position. A lap later, Aaron took Jason wide to take over fourth place. Eli Tomac stayed out of the drama and secured the heat race victory over Dylan Ferrandis. 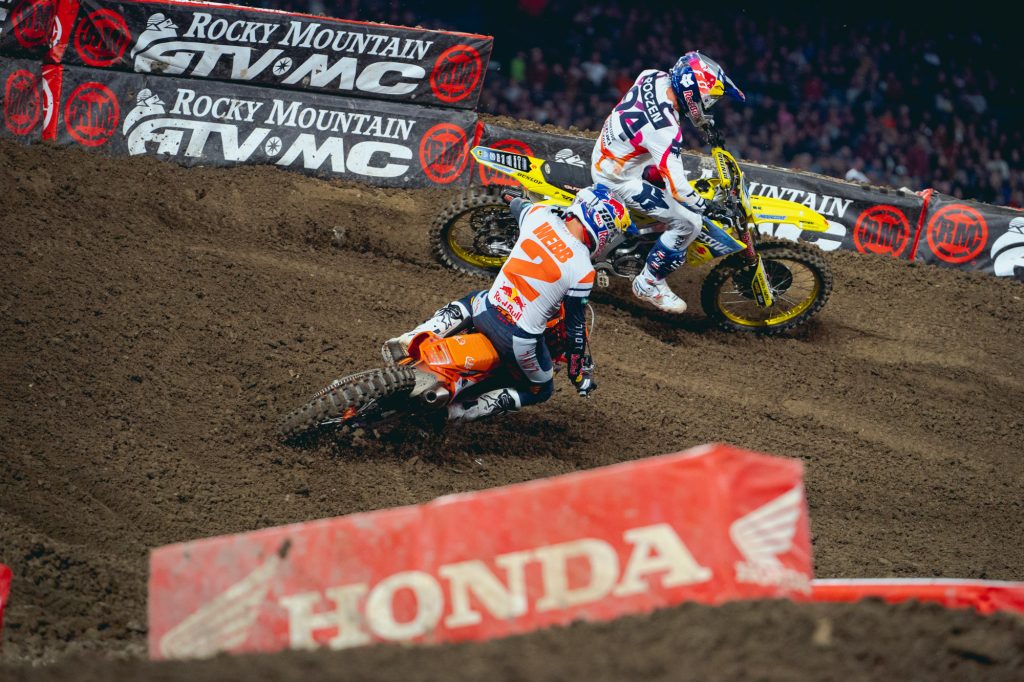 Chase Sexton led the second 450SX heat into turn one with Marvin Musquin and Cooper Webb just behind. Ken Roczen had the inside line on Webb to take over third place in the third corner. Ken then ran inside on Marvin but bobbled, allowing Marvin to hold onto second. Malcolm Stewart made a first lap pass on Webb for fourth place.

Malcolm then began looking inside of Roczen, but Webb found a sneaky inside line to retake fourth place. Ken Roczen made the pass for second place on Musquin, and now worked to keep the Red Bull KTM teammates at bay. Cooper Webb looked inside of Musquin and made the pass stick after a few attempts.

Malcolm Stewart then jumped to the inside of Musquin just a few sections later and snagged fourth place. On the final lap, Cooper Webb challenged Roczen but was forced to settle for third place after a few failed pass attempts. Chase Sexton collected the heat race win.

Freddie Noren led the 450SX LCQ into the first turn, while Shane McElrath was down hard in the first turn after a nasty front flip. Kevin Moranz trailed Noren in second place, as John Short sat behind them. Josh Hill made a pass on Lane Shaw to secure fourth place.

A few laps later, Alex Ray jumped past Shaw and into fifth place. Meanwhile, Moranz began to challenge Noren for the race lead. Josh Hill made the pass on John Short after John missed the triple. Alex Ray then set his sights on Short and the final transfer position.

Alex Ray ran out of time and just missed out on the main event, as Freddie Noren collected the LCQ win. 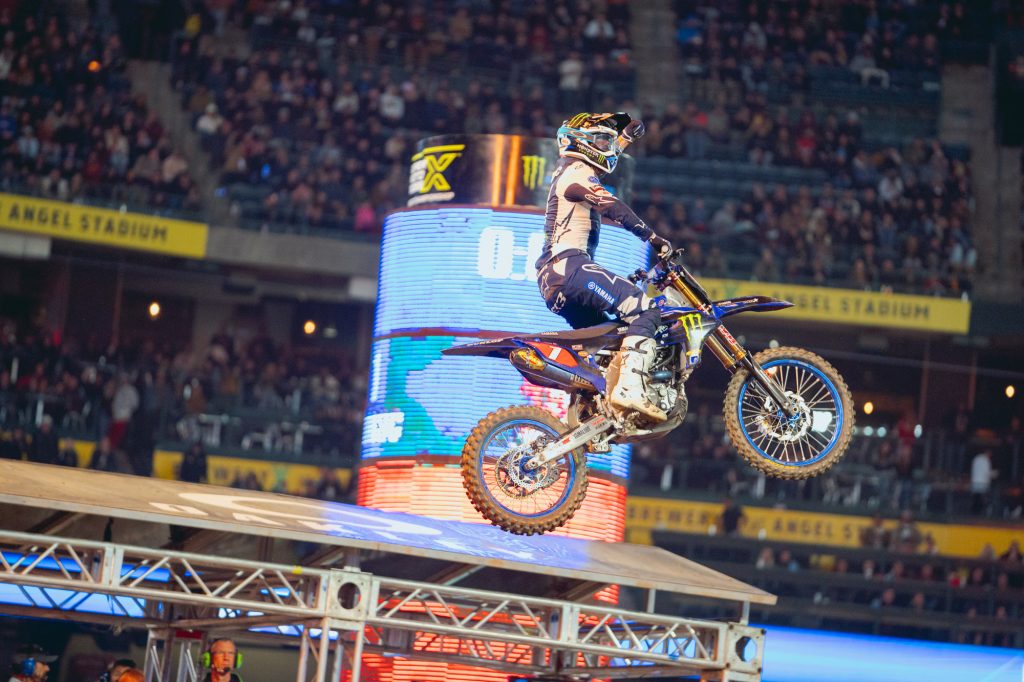 Colt Nichols led the 450SX class into the first turn with Justin Barcia and Eli Tomac behind. However, Colt got pushed wide in the second corner and was shuffled back to sixth place. Justin Barcia was off to the race lead, while Ken Roczen jumped to the inside of Eli Tomac. Tomac and Roczen swapped positions multiple times on the second lap, but Eli ultimately held onto second place. Malcolm Stewart entered the picture, as he challenged Roczen for third place.

Eli Tomac looked inside of Justin Barcia, but was shut down on his first few pass attempts. Adam Cianciarulo tipped over, dropping back in the field. Back up front, Eli and Justin continued to duke it out, until Eli took Barcia wide before the tunnel jump to gain the lead. Barcia then jumped off track and went down a section later.

Ken Roczen now sat in second place, but Malcolm Stewart continued to pressure the Suzuki rider. Jason Anderson made a few passes and latched onto Chase Sexton, who held down fourth place. Malcolm Stewart jumped past Roczen over the triple and then held off Ken’s counter attack to secure second place. Ken missed the finish line after getting passed, allowing Sexton to sneak by.

While leading, Eli Tomac tipped over on the tunnel and allowed Malcolm Stewart, Sexton, Roczen, and Anderson by. Chase Sexton made a mistake, allowing Malcolm to gain some time. Then, Jason Anderson lost his front-end and dropped back. Laps later, Malcolm Stewart continued to lead but Chase Sexton was in pursuit.

Chase Sexton jumped to the inside of Malcolm and took Stewart wide and off of the track to take over the race lead. Malcolm then had to rejoin the track at the end of the rhythm section. Eli Tomac took Roczen wide after the finish line and secured third place. Dylan Ferrandis was now in pursuit of Ken Roczen, as he jumped to the inside to take away the position after a lap.

Eli Tomac jumped to the inside of Malcolm to take away second place just before the first triple-jump. Chase Sexton then made a slight mistake, allowing Tomac to look inside just a lap later. Eli took Chase wide after the finish line and retook the race lead. Malcolm Stewart got sent over the bars hard while in third place and was slow to get up.

Cooper Webb made a pass on Ferrandis in the same lap, placing him in third place after Malcolm’s mistake. With two laps to go, Cooper Webb was reeling-in Chase Sexton. Cooper took Sexton wide before the finish line and took second place before crossing the white flag.

Eli Tomac crossed the finish line to take the main event win just ahead of Cooper Webb and Chase Sexton. 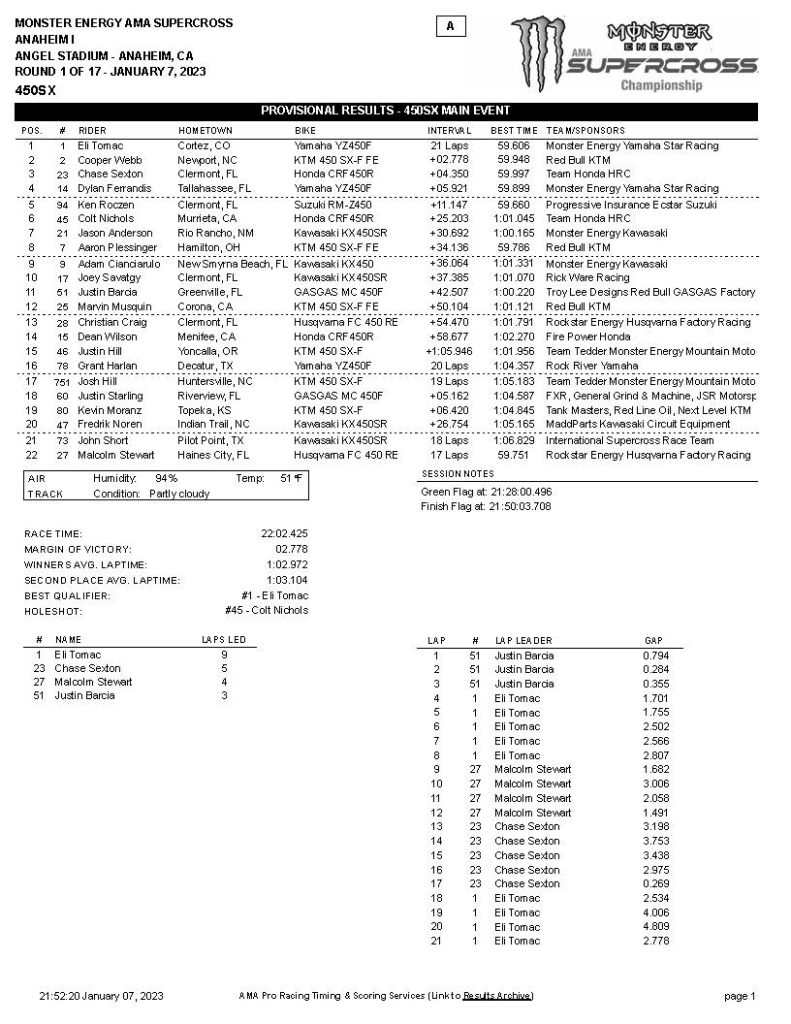 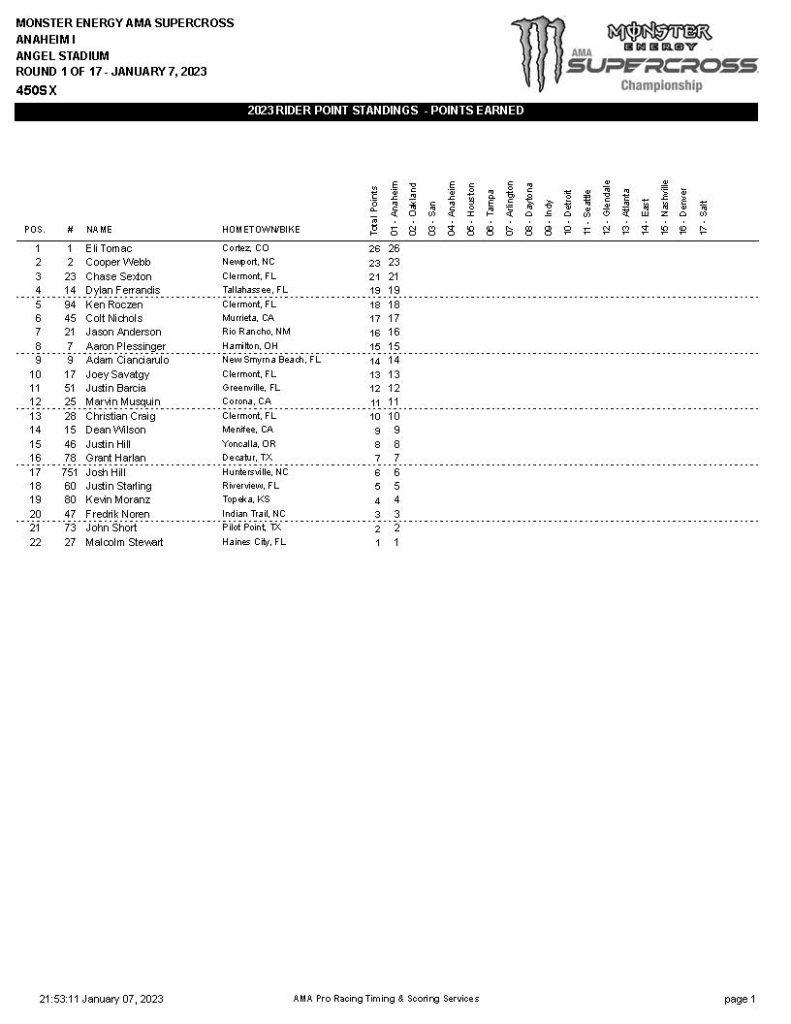 2023 Anaheim One Supercross | How Was Your Weekend