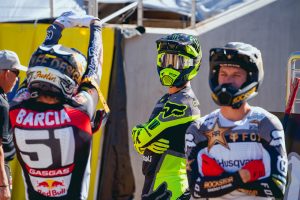 After an unforeseen weekend off, due to extreme weather conditions, the 2023 Monster Energy Supercross Series is back underway and in San Diego, CA. The fastest riders in the world spent Saturday afternoon learning the track that fills the floor of Snapdragon Stadium, and to no surprise, the lap times are incredibly close. Just fractions of a second split the front-runners in the 250 West Coast and 450 Class on the qualifying sheets, which ratcheted up the anticipation for tonight’s first gate drop even more. 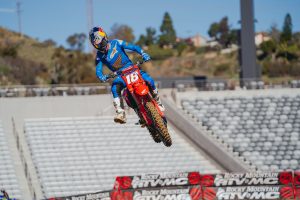 On the final lap of the last session of Qualifying, Jett Lawrence jumped to the top of the time sheets with a blistering fast 50.099. Despite an awkward crash in the second corner on the first lap, where he bounced long and rolled over the backside of the berm, Jett put together a flawless session of qualifying ahead of the night show in San Diego.

Rj Hampshire was just behind with a 50.361, as the Rockstar Energy Husqvarna Factory Racing rider held the top spot for a majority of the session, ultimately until Jett claimed it on the final lap. Though, Rj looked to be feeling it throughout the day, as his times were at the top of the leaderboard in both timed-qualifying sessions.

Pierce Brown was the next on the time sheets, as he logged a 51.085 in the final session of qualifying to secure his position. The Troy Lee Designs/Red Bull/GasGas Factory Racing rider looked to be feeling fine after his hard spill at round one. 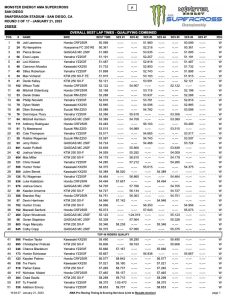 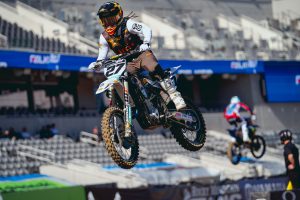 Malcolm Stewart topped the charts in the final 450SX timed-qualifying session with a blistering fast 50.008. Though, the Rockstar Energy Husqvarna Factory Racing rider didn’t secure the top spot until late in the session, as him and others swapped positions multiple times throughout the practice.

Chase Sexton was the second name on the time sheets, though the Team Honda HRC athlete was the fastest rider on track at multiple points of the final session. Chase logged a 50.108 late in the final session, which ultimately landed him in second place.

RedBull KTM’s Cooper Webb landed in third place overall after the the 450SX timed-qualifying sessions. The two-time champ looked speedy all afternoon, leading to his 50.118, which he logged in the final session. 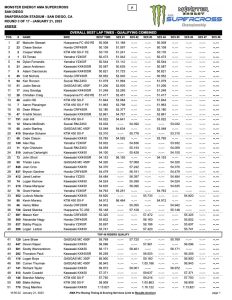