For 2022, the Honda CRF250R received the chassis update that last year’s CRF450R did, and the bike also enjoys a highly revised powerplant, new bodywork, and suspension updates. We’ve been big fans of the previous CRF250R, mostly thanks to its amazing handling character. While the engine lacked some punch, the rideability of the previous generation CRF250R made it one of our favorites. 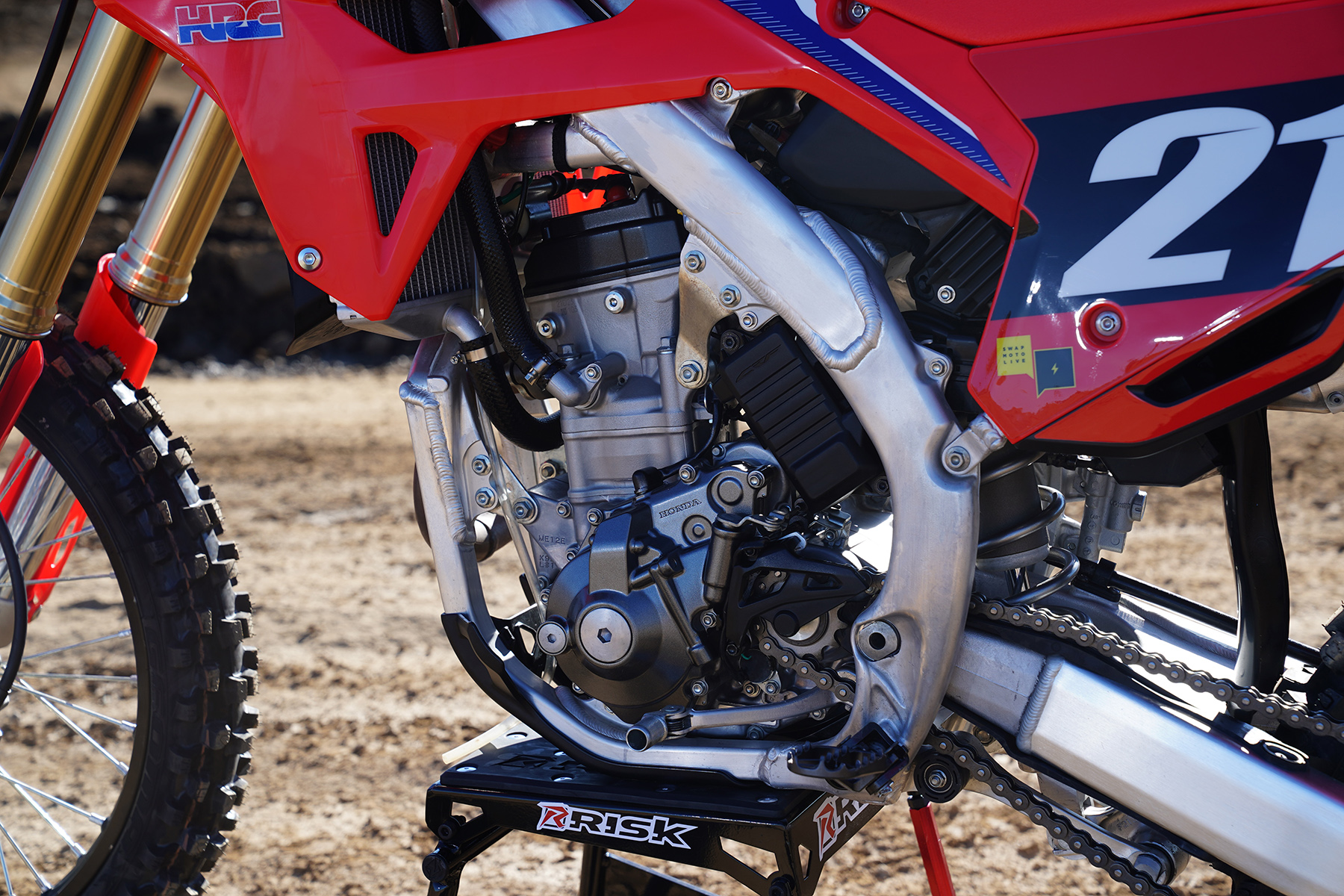 The new CRF250R is much more aggressive in the powerband and the overall feel of the chassis and suspension. The new chassis – as it does on the CRF450R – has a stiff feel that makes suspension set up extra critical, and as delivered, the bike has an unbalanced feel that makes the bike a bit too active for most. We found that stiffening the fork and lowering it slightly in the triple clamps, while adding a bit more shock sag (around 106mm) gave the bike a better-balanced feel. These changes still allowed the Honda to exhibit its trademark razor-sharp cornering character but added trustworthiness at speed, too. The bike has a light, flickable feel on the track, and it inspires confidence when set up properly. 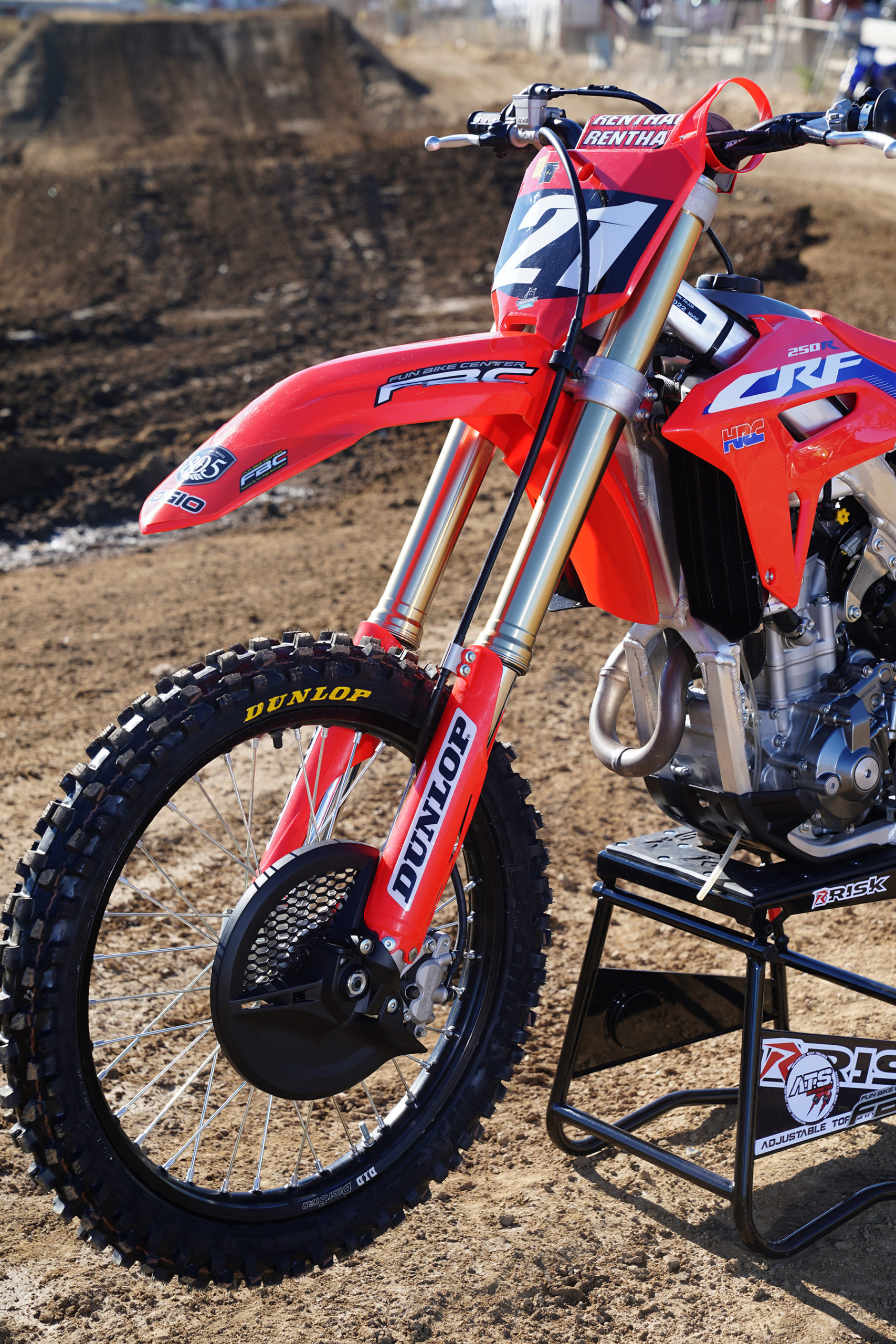 The engine, meanwhile, is a definite improvement over the one it replaces, but the CRF250R is not the powerhouse of the 250 class. Throttle response down low is snappy and exciting, as the Honda delivers a solid punch right off idle. Mid-range power is great, but the bike lacks some top-end overrev and tends to fall a little flat earlier than some of its competition. Engine vibration is also the most noticeable on the Honda, as plenty of engine feedback is transferred to the rider’s hands.

The rider triangle is excellent for most riders, tall or short, as the ergonomics are open and easy to maneuver on. The Honda brakes are superb, and the fit and finish of the machine are typical Honda: excellent. 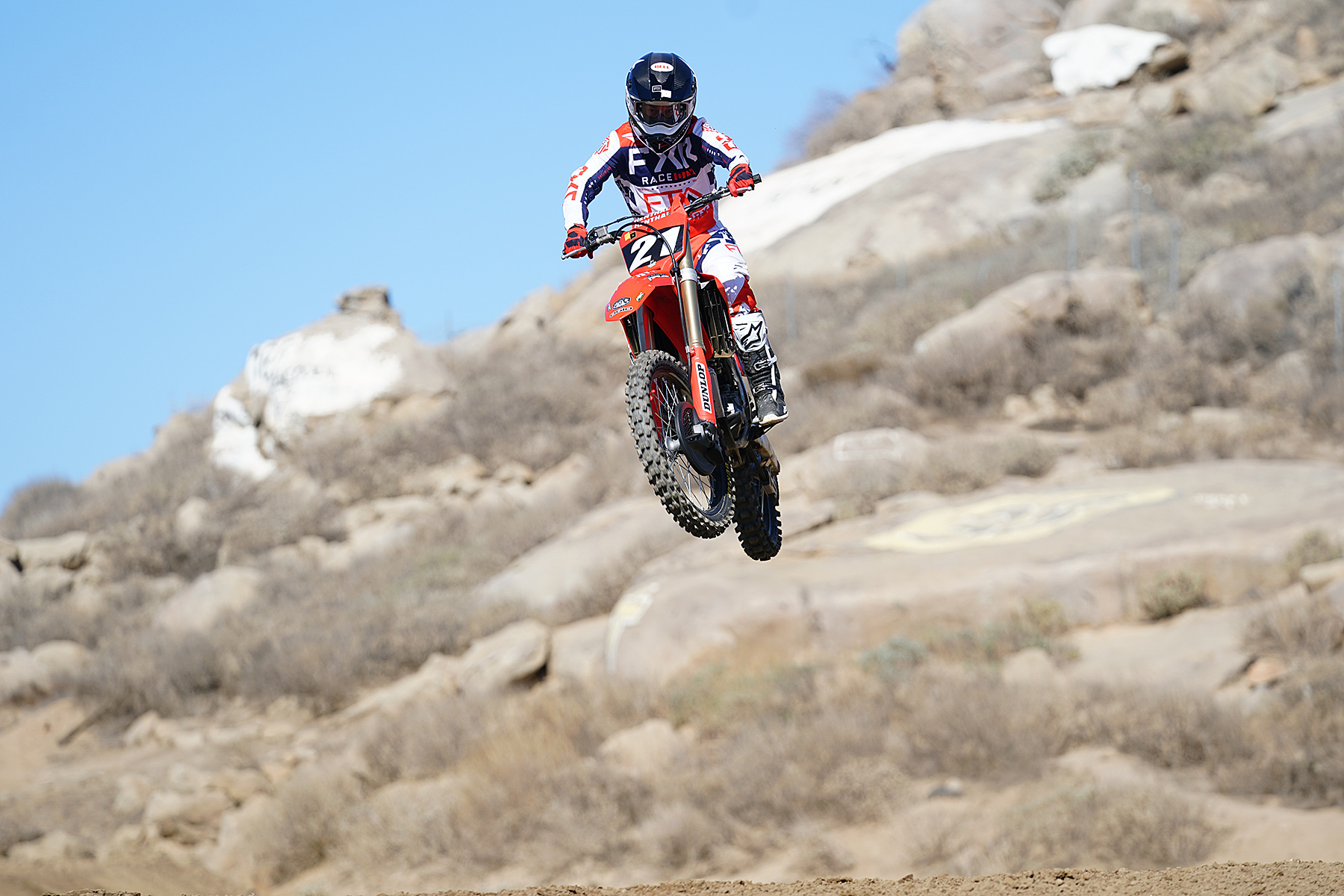 “The Honda lacks in power in comparison to the others. It is best in map three, but it still falls flat on top. It is, however, easy to ride and control.” – Humberto Baca

“In stock form, the bike is uneasy and unsettled with a heavy front end. We made some changes to the fork and shock to improve, but the bike remained unstable, and I never fully felt comfortable on it at speed. It did perform exceptionally on smoother, tighter tracks, though.” – Humberto Baca 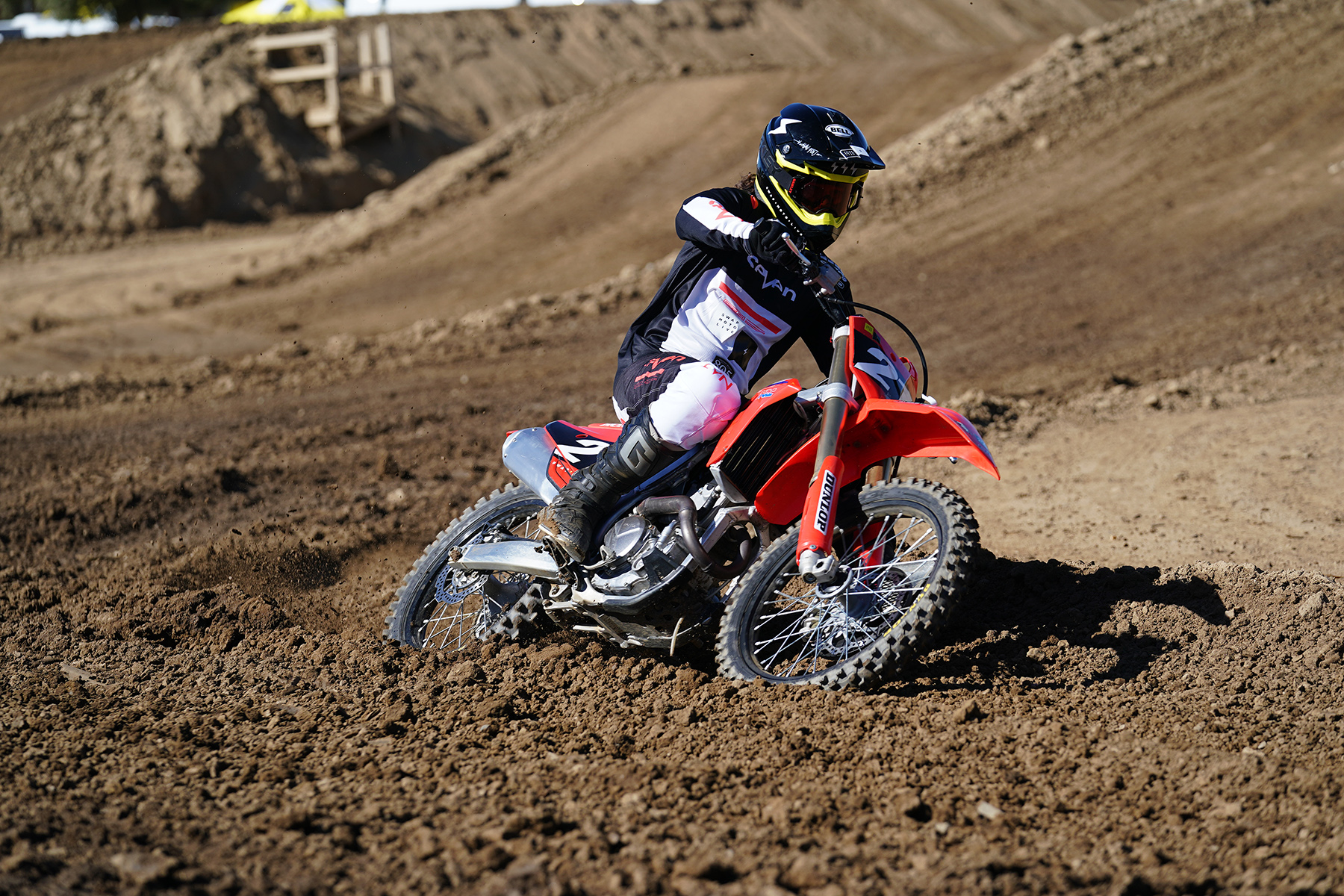 “The CRF250R engine is mellow but pretty torquey, and I was surprised how well it continues to pull in the aggressive map. The standard and mellow maps are useless, but the bike is fun and entertaining to ride in the aggressive setting.” – Kordel Caro

“The Honda handles decently, but it gets nervous in corners. There is a fine line between the bike feeling harsh and too soft, and the CRF is by far the worst handling bike in choppy braking bumps entering rutted corners. No offense to Honda, but personally, I wouldn’t race this bike.” – Kordel Caro 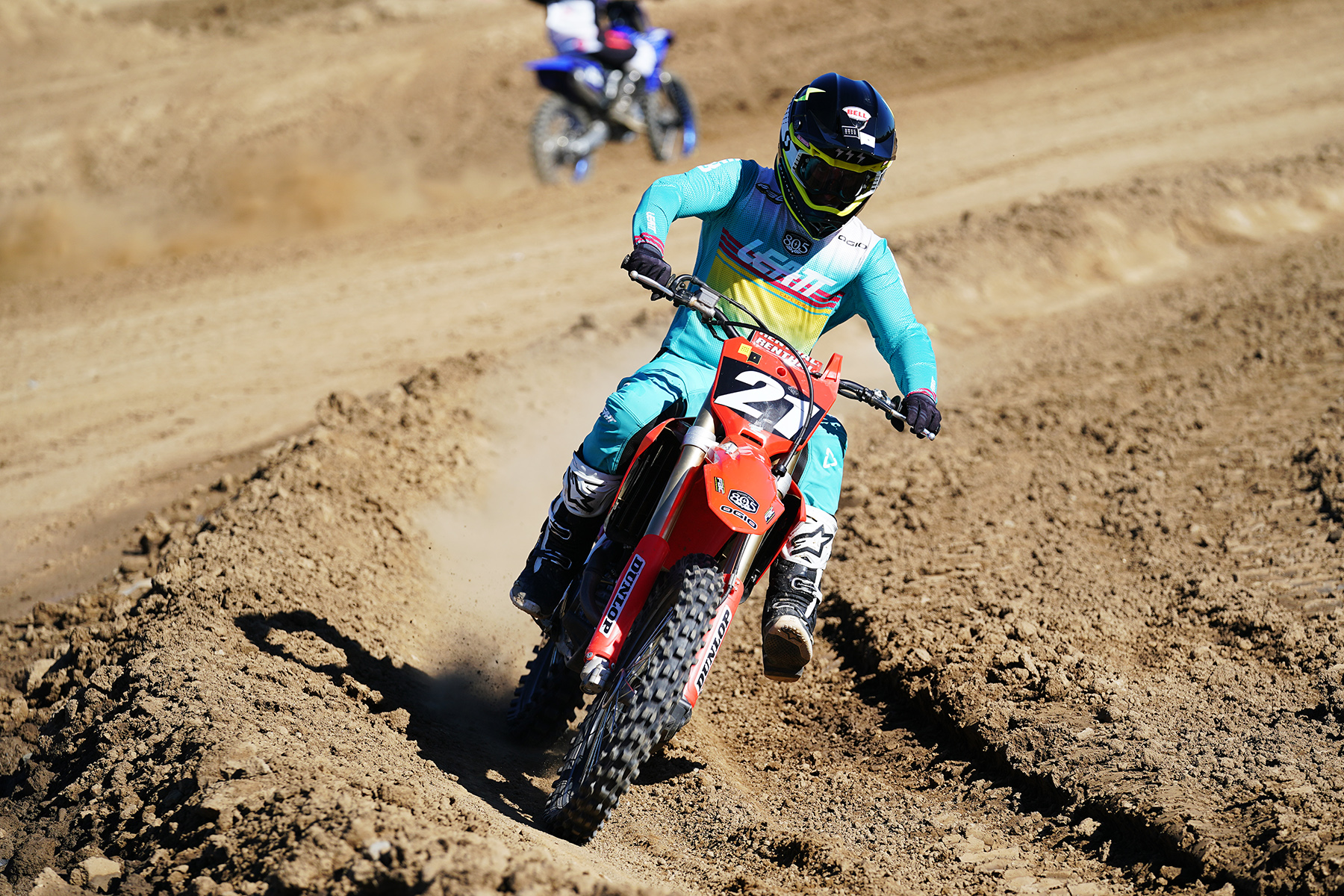 “The engine is impressive in map three – the aggressive setting. The first two maps aren’t that great, and it actually caught me off guard when I put the bike in map three. Of all the bikes, the mapping options of the Honda offer the biggest difference in feel and performance.” – Chase Curtis

“The Honda vibrates a lot, and that is my least favorite aspect of the bike. I struggled all day knifing the front end entering corners, and the bike lacks a balanced feel as the shock seems to overpower the fork. I’ve never felt so disconnected and scared on a bike before.” – Chase Curtis 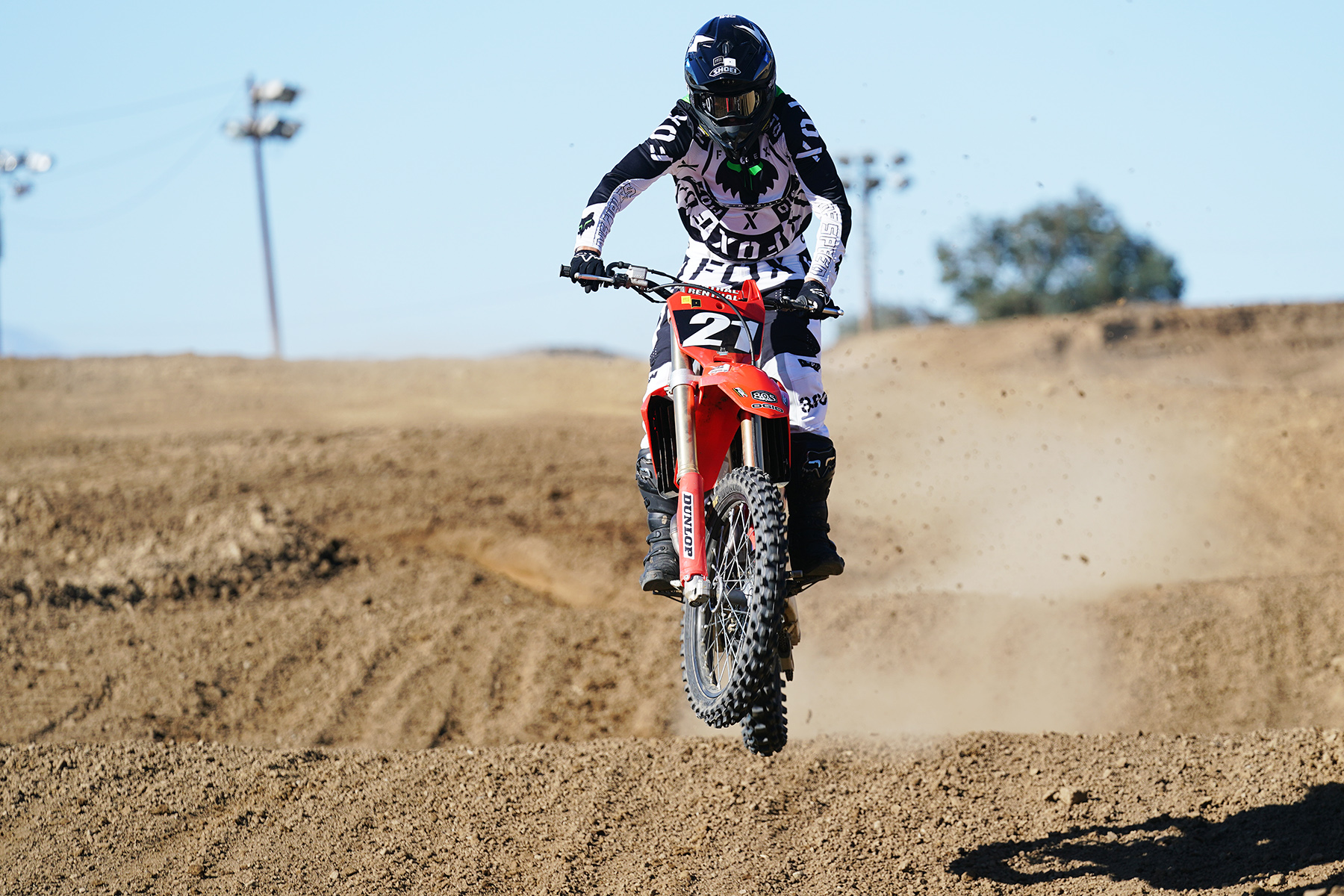 “In the right circumstances, it doesn’t get any more fun than the CRF250R. The cornering is razor-sharp, the handling is quick and agile, and while not the most powerful, the engine is lively and fun. Tight tracks with a lot of jumps are where the Honda shines.” – Pat Foster

“The Honda’s chassis has a rigid feel that transfers track feedback to the rider, and on fast, choppy straights, the bike’s quick handling can become a liability. High-speed stability is not the Honda’s forte, but with the proper setup, you can get it working fairly well.” – Pat Foster 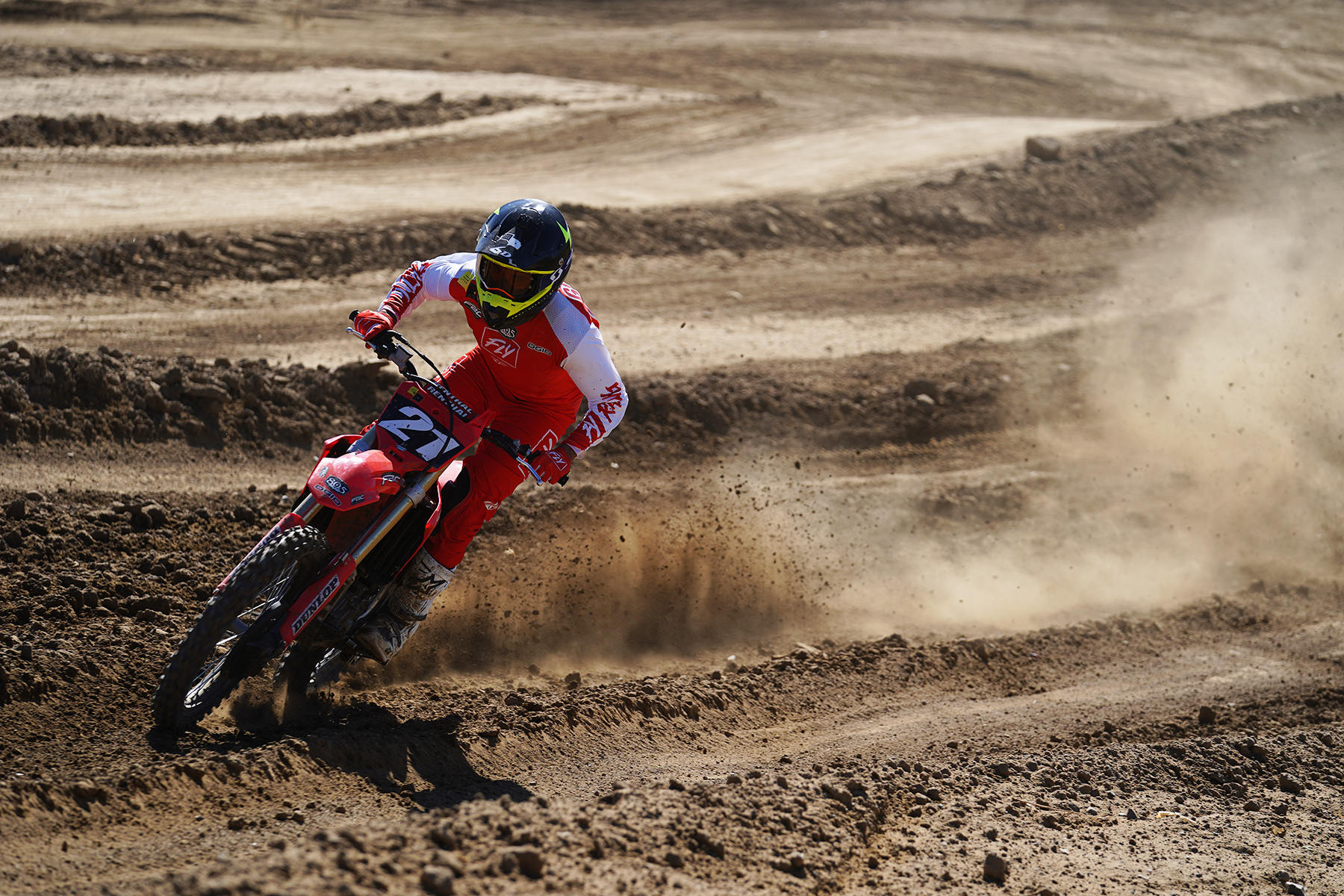 “The bike has good throttle response and great mid-range, but the overrev up top is not the best. The bike also vibrates a lot in the higher RPM range…more than any of the other bikes in the shootout, for sure.” – Rene Garcia

“The bike handles great, but you have to be careful not to place too much weight on the front end because it can get busy. The CRF is the lightest feeling bike on the track, but it is harsh on hard landings. This is the most comfortable bike for me as I love the rider triangle and ergonomics.” – Rene Garcia 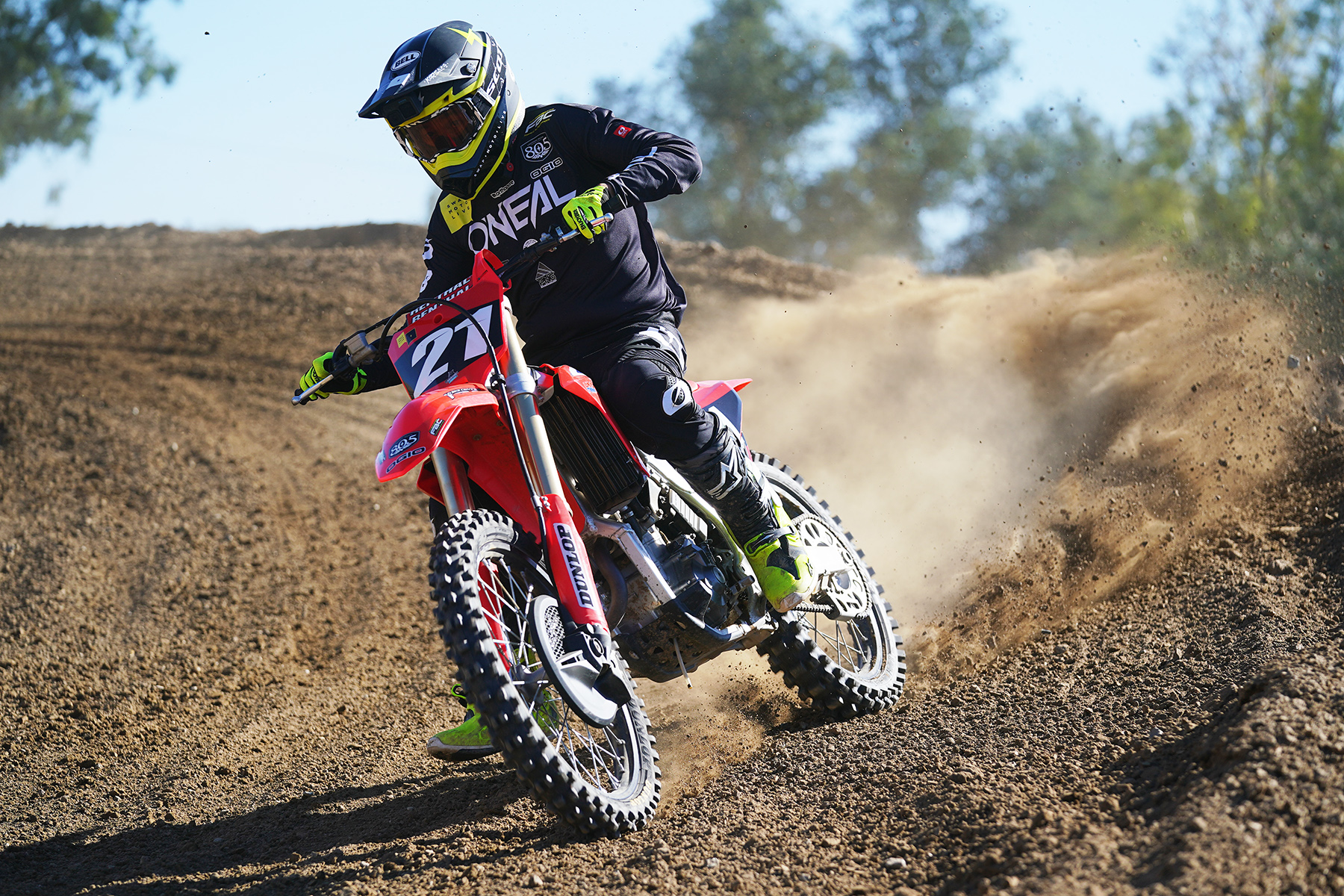 “Of all the bikes in the shootout, it took the most adjustments for me to feel comfortable on the CRF250R. The suspension was unbalanced, and I had trouble with headshake and oversteering in corners when I first got on it. Stiffening up the fork and lowering it in the clamps and adding sag to the shock helped tremendously.” – Donn Maeda

“I’m not sure why, but the Honda has noticeably more vibration than any of the other bikes in the shootout, and this is exaggerated by the engine’s tendency to fall a little flat up top. Map three is by far the best setting, as it gives the bike the most aggressive powerband.” – Donn Maeda