Every single test rider was shocked when they sat down to rank the bikes in the order in which they would purchase them, mostly because it seemed like a crime to mark the Honda where they did. (With the exception of Rene Garcia, who chose it third.)

Is the Honda CRF450R a bad bike? Hell no! The new chassis is less rigid than the one it replaces, the motor is an absolute powerhouse, the ergonomics are hard to beat, and the technology that was built into the red rocket is mind blowing.

So why did it fare so surprisingly poorly? It’s simple: set up. Any time a manufacturer produces an all-new machine, extensive testing goes into the final production settings. In the case of a Japanese manufacturer, there are two set of testing teams; one in Japan and one in the United States. It was our suspicion that the COVID-19 pandemic had a negative effect on the final production suspension setting test sessions, and when we asked Honda personnel, they confirmed our suspicions. As delivered, the CRF450R is set up on the soft side, and we mean really soft. Our attention was grabbed at the bike intro when we were told that technicians had already set up the clickers where they thought we would like them. Normally, bikes are given to the media with the stock settings intact, and we go from there. Not this time. In order to do our due diligence, we asked to start with stock clicker settings and found that the bike had lots of front-to-rear weight transfer under braking and acceleration. Going in on the compression and rebound clickers certainly helped, but past a few clicks yielded a harsh ride. An increase in spring rates, front and rear, is something that will be on most riders’ wish lists.

The soft fork also interferes with the CRF’s magical cornering abilities, as the bike almost oversteers in ruts and flat corners. Lowering the fork in the triple clamp helped, but then the bike tended to push while exiting corners. Our test bike is already at enzo racing for some firmer settings, so stay tuned for a ride report!

The most puzzling of the shortcomings is the EFI mapping. Maps one and two have a fat feel down low that prevents the bike from rolling on smoothly at low rpm. Of course, this was less noticeable on Cahuilla Creek’s soft surface that invites a heavy throttle hand, but the problem was still felt by some testers. Map three is the least affected by the “dirty” feel down low, as it comes on like gang busters and blows through the rich portion of the ignition map. With more low-end response, however, it falls flat much sooner than the other two maps. It is plain to feel, though, that in spite of the EFI mapping, that the CRF450R motor is massively powerful with a great power character that can be ridden a gear high or revved to the moon. Twisted Development, in fact, has already had a 2021 bike on the dyno and has come up with cleaner map settings that can be input into the stock ignition componentry.

As is, the 2021 CRF450R has a boatload of potential and will certainly be a common sight at the racetrack, but off the dealership floor it needs some work. 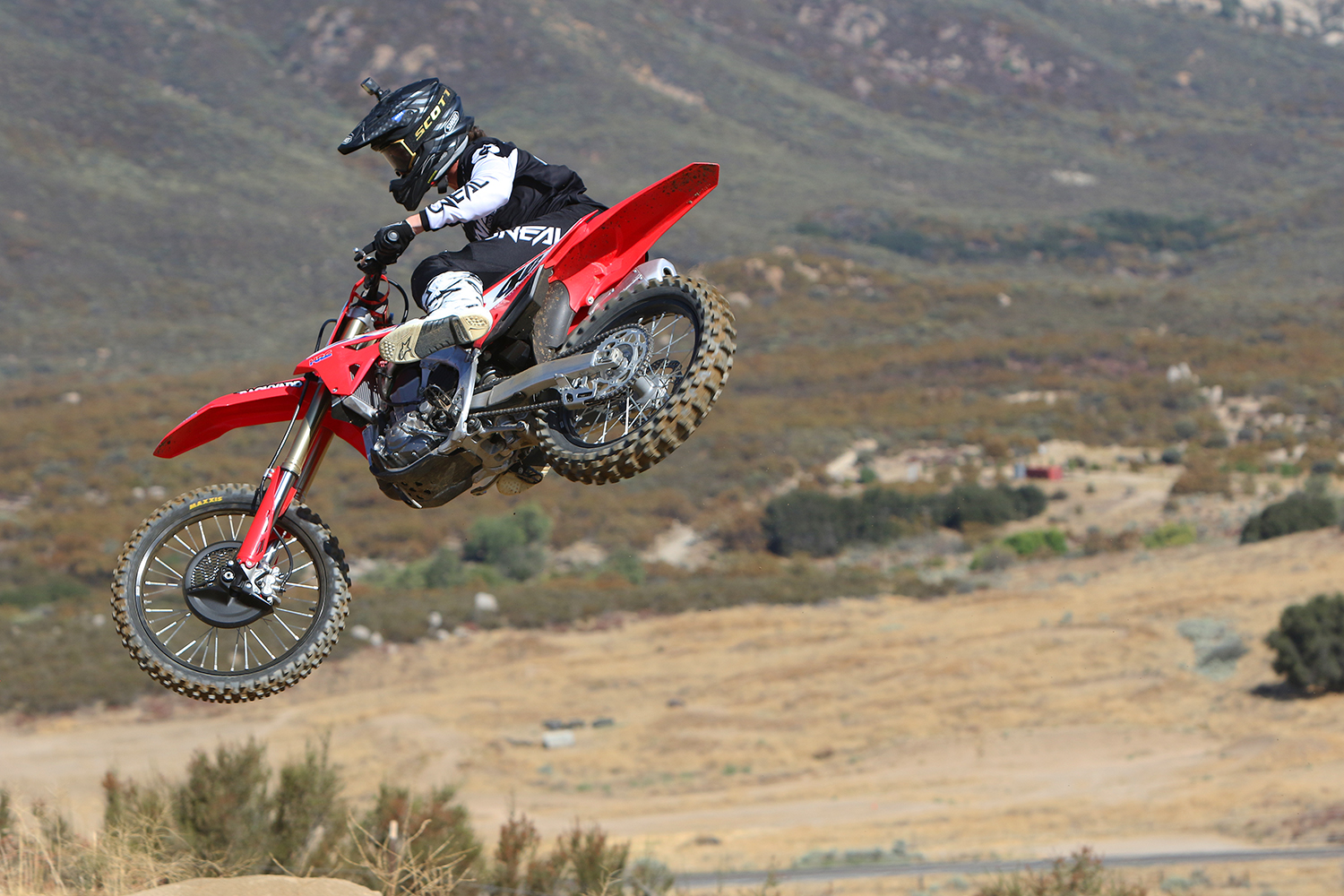 “It’s more balanced than the previous model and it has greater cornering abilities.” – Ericsson

“The suspension is pretty soft and bottoms easily, and it makes the bike pretty busy at times.” – Ericsson

“It feels like the bike has a smoother hit down low, but the bike does make a ton of power and it rips.” – Ericsson

“It’s the best-cornering bike in the class, hands down, but it’s also the lest confidence-inspiring.” – Foster

“Honda missed the mark on fork settings as it is sprung far too soft to take advantage of the bike’s aggressive stance. The CRF needs to be ridden aggressively and the fork is not equipped to match.” – Foster

“Power-wise, the Honda is exciting and downright potent, and the CRF still hits harder than all the others.” – Foster

“The Honda corners great but it lacks some high-speed stability. The frame still has a rigid feel.”

“The suspension is soft, and it rides rear high. We made adjustments and got it working better but it still beat me up.” – Garcia

“I spent the most time on the Honda and got it set up pretty well, but there is still plenty of room for improvement.” – Garcia

“The fork, especially, feels too soft. Going in on the compression makes a noticeable improvement, but after a certain point it loses comfort.” – Maeda

“The CRF is very comfortable and easy to move around on and I love the ergonomics. Probably the sturdiest feeling bike of them all.” – Maeda

“The rich mapping was far less noticeable at Cahuilla than Glen Helen, and the bike has an abundance of power throughout the powerband.” – Maeda

“I couldn’t get comfortable on the Honda because the suspension was so soft. The bike had a lot of weight transfer and was a little too busy for my tastes.” – Puerner

“The CRF has the most engine vibration and mush less comfort than the other bikes. The seat foam is super thin on the sides and that’s where I sit when I corner.” – Puerner

“The Honda has very linear and strong power, but I have an issue with the mapping, it’s very rich and fat on the bottom end.” – Sleeter

“The chassis is very stiff on hard landings. It almost has a dead feel with some potential that’s untapped.” – Sleeter

“It seems like the bike was on the right track, but t got rushed. Firmer suspension and better ECU settings would be huge.” – Sleeter