The third bike in the KTM Group’s triple threat, the GASGAS MC 450F, is a new player in this year’s 450 Shootout as it was not available in time for last year’s. However, the other two Austrian machines, the 2022 returns unchanged, and we were well aware of what to expect from it, performance-wise.

The MC 450F is marketed as a more affordable version of the Husky and KTM. As a result, it is not equipped with the usual bells or whistles, but less-expensive parts, including forged triple clamps rather than billet aluminum, silver Excel rims and not black, Maxxis Tires instead of Dunlop, and header pipe that is without the resonance chamber found on the FC and SX-F.

Things left off the GASGAS for lower price tag include the dual map and traction control switch (a switch can be purchased for $170 that accesses the settings and TC programmed into the red bike’s ECU), an hour meter (standard on the expensive machines), and the optional vented airbox cover (included with the owner’s manuals of the white and orange bikes). While the GASGAS has the KTM’s aluminum rear subframe, it is equipped with the Husqvarna’s softer swingarm. 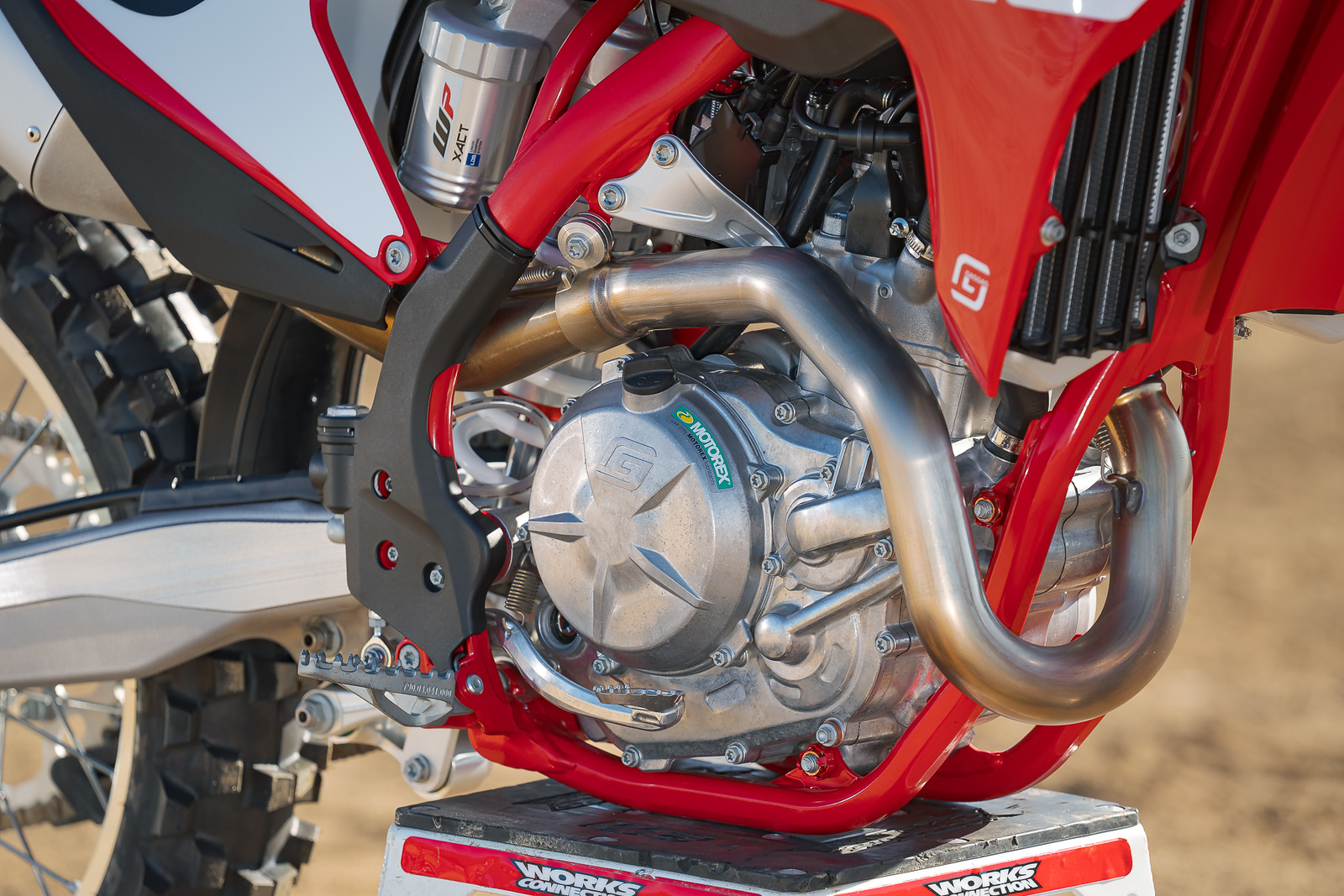 The result is a unique machine that shares most of the best attributes of its brothers but enjoys a personality all its own. The GASGAS is smooth yet powerful and is perhaps the friendliest feeling of the Euro trio. The engine packs plenty of power but delivers it in a predictable, easy to control manner. Some testers enjoyed the way they could ride the MC 450 harder than the rest, without feeling as if the bike was ripping out of their hands. 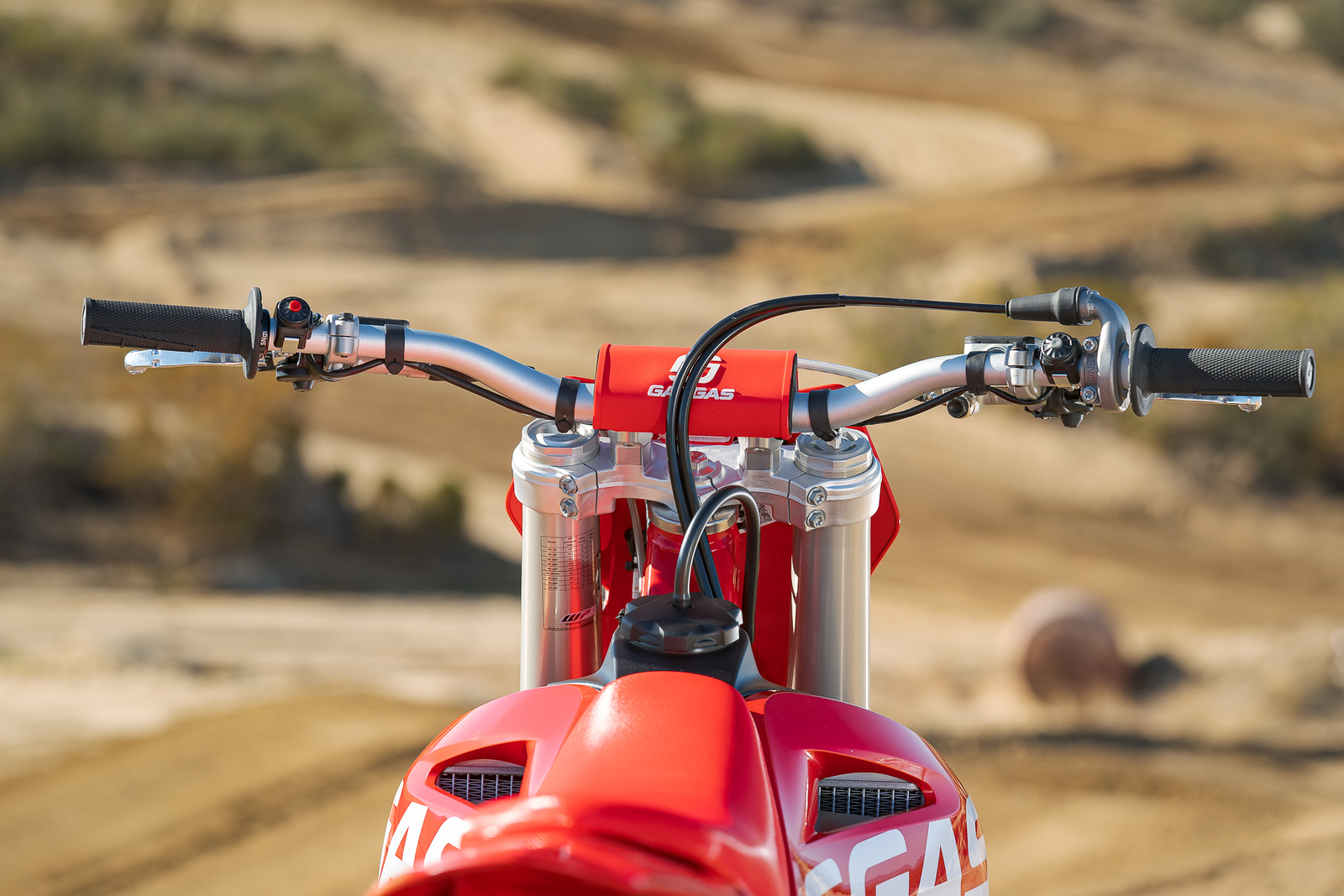 Just as the powerband feels softer, so does the ride. The forged triple clamps offer more comfort than the billet units on the Husky and KTM, and the GASGAS transfers less track feedback to the rider’s hands. So, where the front ends of the other two Austrian machines might deflect from square-edged bumps, the GASGAS soaks them up and maintains forward momentum.

Some of our testers felt most comfortable on the GASGAS with up to 108mm of rear shock sag, as it gave the bike a more stable, balanced feel. The MC 450F’s WP suspension is the same configuration as the KTM’s (not shortened like the Husqvarna), and the bike exhibits excellent cornering prowess and decent high-speed stability. However, the consensus is that though the valve and spring settings are the same as are found on the KTM, the GASGAS has a softer, plusher feel, likely due to the triple clamps and Husqvarna swingarm.

“The GASGAS has a solid engine that doesn’t hit too hard, but pulls strong all the way through. It would be nice to have a map switch for the more aggressive setting, but I don’t miss the traction control option.” – Connor Ericsson 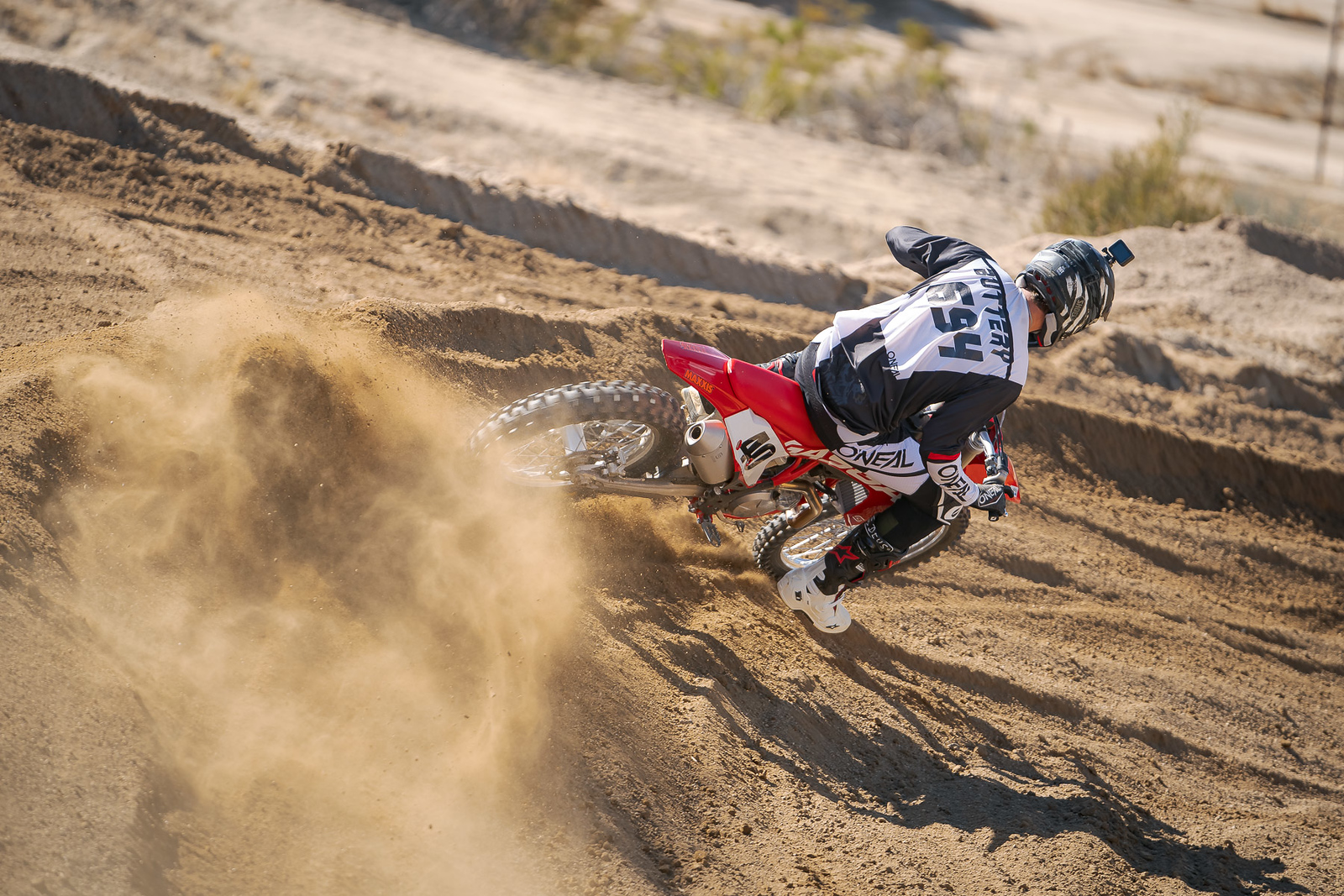 “The suspension is a little soft and the forged triple clamps give the front end a much more forgiving feel. I like the feel of the aluminum rear subframe, as it gives the bike a smooth ride.” – Connor Ericsson

“The GASGAS feels slow for a 450 and the bike is lacking bottom-end power. I miss the map button to be able to spice things up. I think this bike would be best for beginner or novice riders.” – Kordel Caro 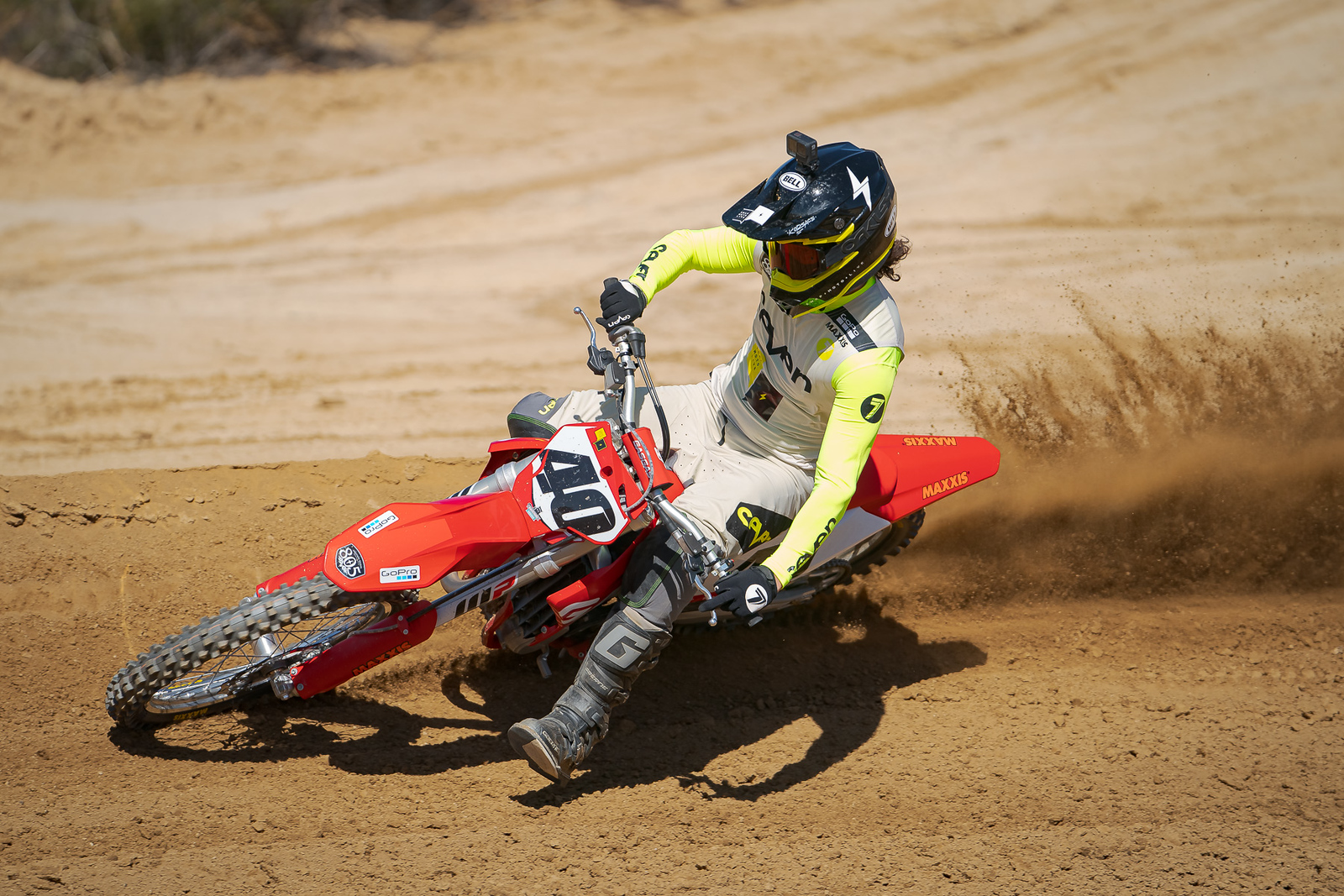 “The rear end felt pretty high with the recommended settings, but I added air to the fork to help give the bike better balance. I can’t point out anything the bike did horribly or great. It’s average.” – Kordel Caro

“Smooth is the best word to describe the GASGAS powerband. It doesn’t have the best low-end power, but I do like how free-revving the engine feels. Really miss the map switch on this bike. What you get is what you get.” – Rene Garcia 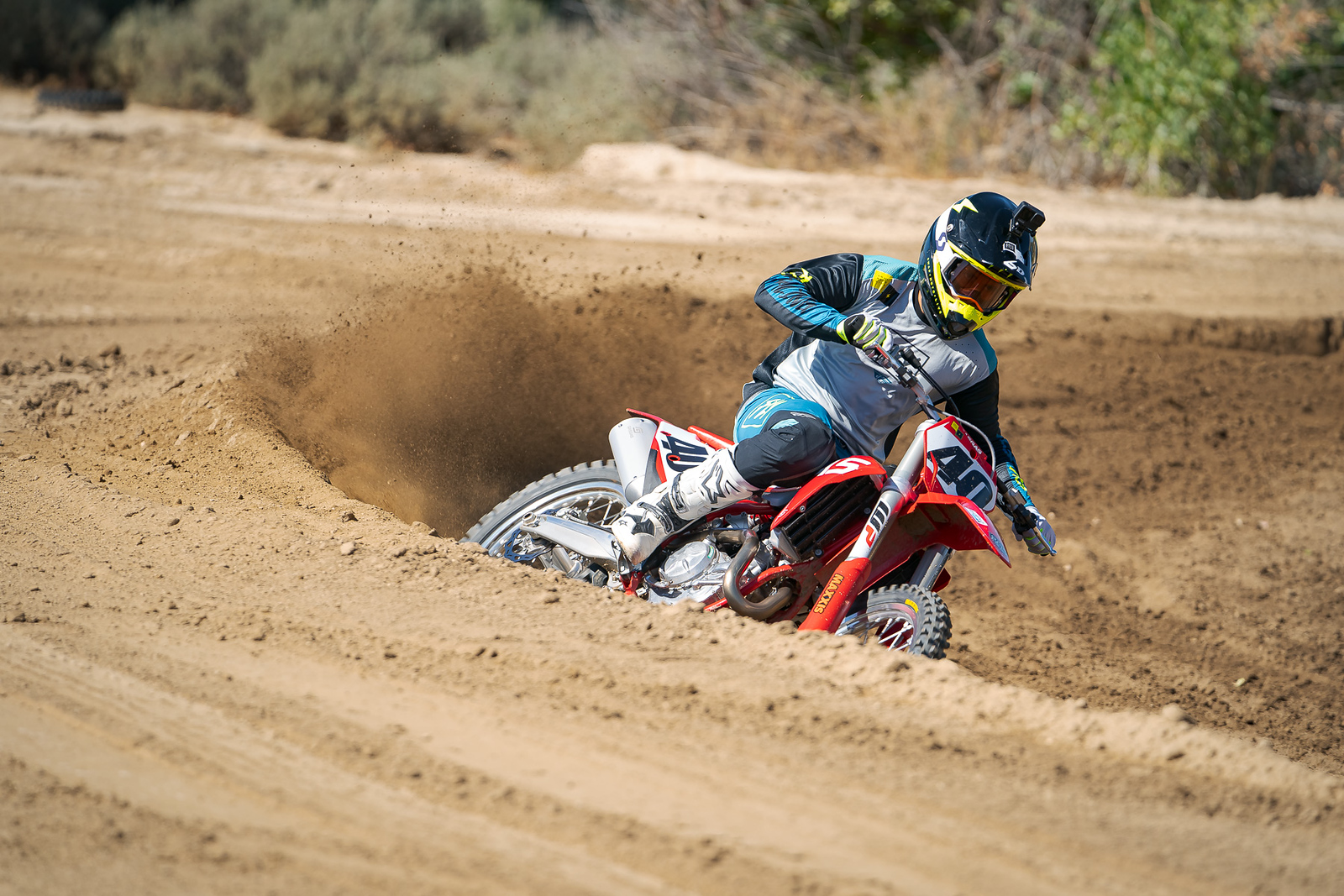 “The forged triple clamps give the bike a nice, push, smooth feel. The bike as a whole is a little on the soft side and it struggled under deceleration with a little bit of head shake.” – Rene Garcia

“The GASGAS is smooth and controllable, and very easy to get comfortable on. I did notice that it had a notchy feel to the transmission, and I had to be very deliberate with both upshifts and downshifts. This could get better with time.” – Donn Maeda 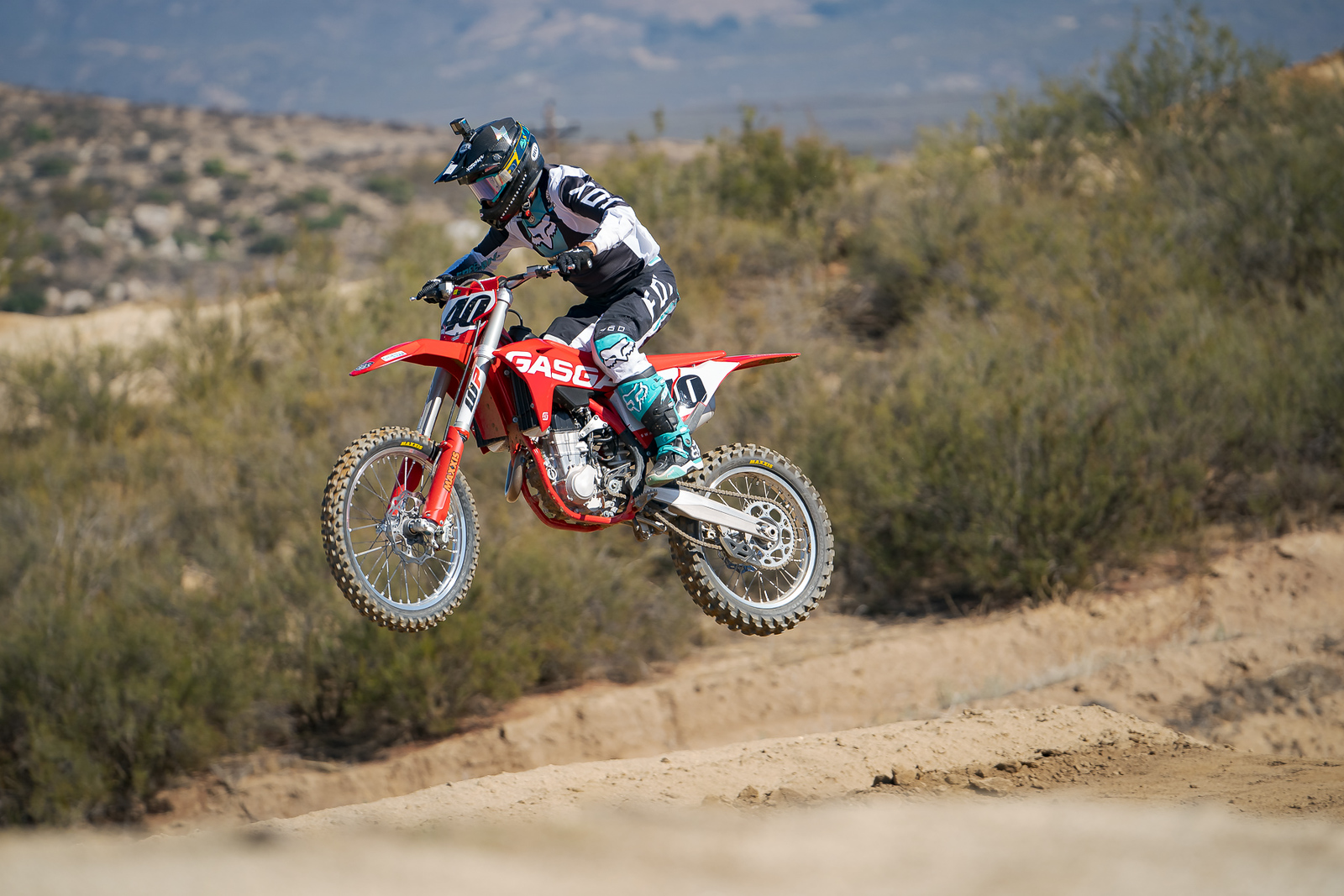 “The rear end overpowered the front in the recommended settings. I lowered the shock sag and ended up preferring adding two clicks of compression to the fork over increased air pressure.” – Donn Maeda

“This bike makes smooth, usable power from bottom to top. It is fast, yet easy to ride and be aggressive on. If I had this bike I would for sure buy the map switch so that I could have some additional options.” – Kyle Puerner 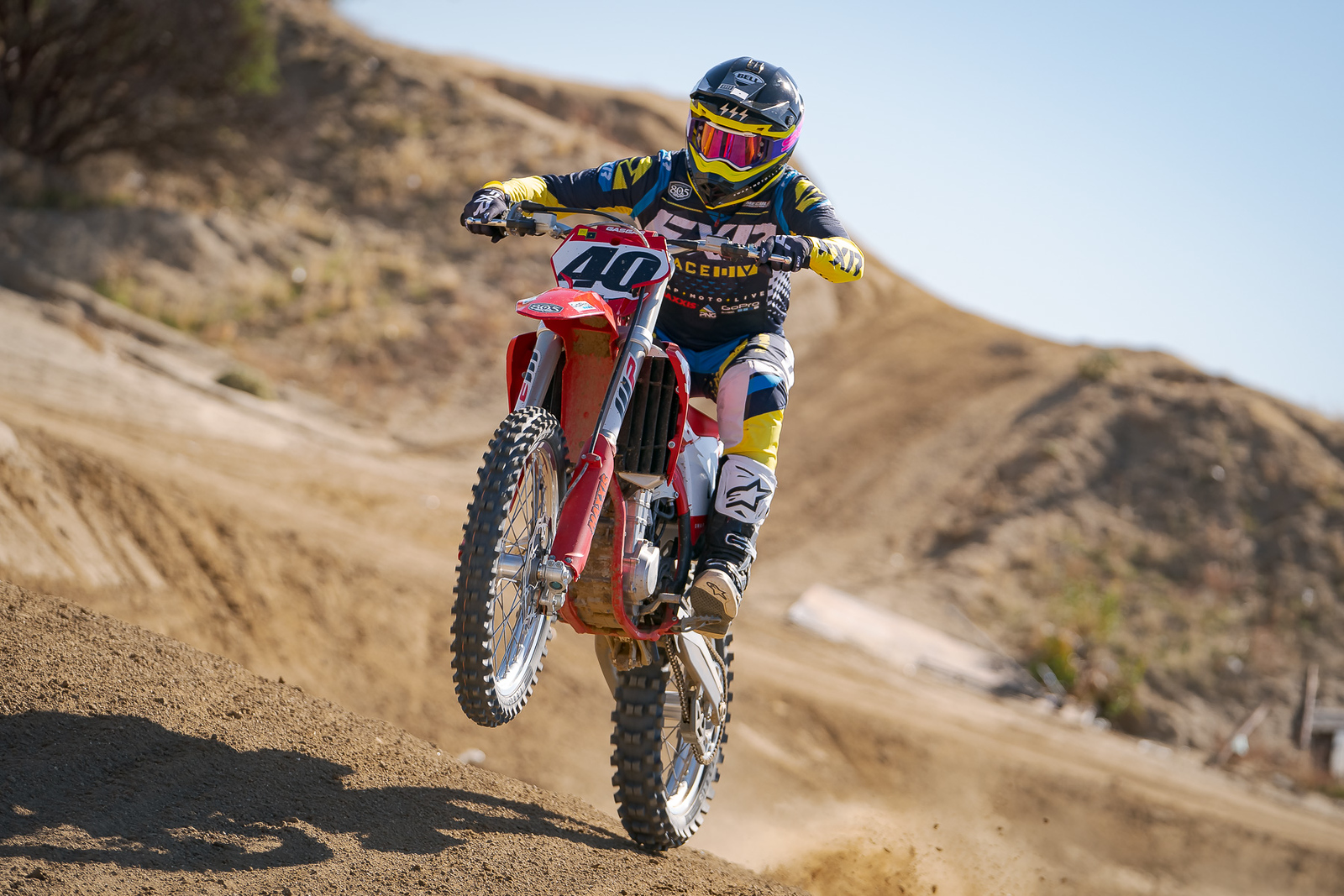 “The GASGAS is very plush. It is well balanced with a good feel. It is a little on the soft side, and it has a stink-bug feel. I lowered the rear end to 108mm of sag and went in on the high-speed compression on the shock for better balance.” – Kyle Puerner

“I absolutely loved the GASGAS engine. It was amazing! I could ride it hard and wide open and stay completely in control. I love third gear because it feels like it will keep pulling forever without signing off.” – Brian Smith 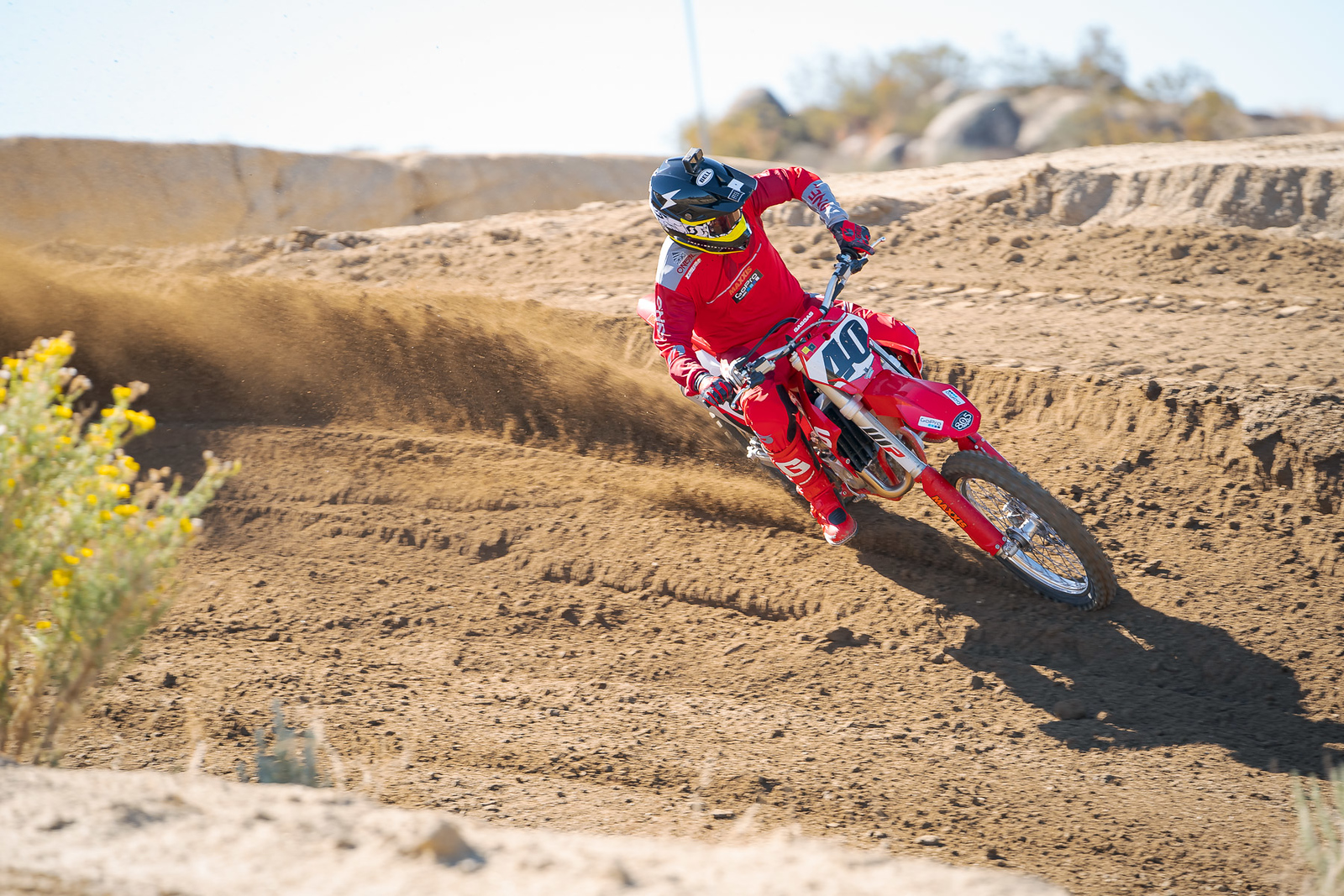 “The GASGAS was a total shocker for me. It fit me well and the suspension was amazing. I over jumped some things on purpose and it still felt great. I would race this bike bone stock. I love it!” – Brian Smith