The 2021 Honda CRF450R was an all-new machine last year, and like consumers around the world, we couldn’t wait to get our hands on one of the sexy red machines. Unless you’re a newcomer to the sport or paid no attention to reports about last year’s machine, you already know the COVID-19 pandemic had a massive effect on the production settings of the machine and canceled the final joint-test sessions between the United States and Japan riders. That said, this year’s bike could be considered the machine that the original 2021 bike was meant to be.

For ’22, revised ECU settings address the blubbery performance of the original ’21 bikes (Honda offered a complimentary re-flash of early ignitions at dealerships), and firmer suspension settings also grace the Showa fork and shock for better handling and control

Believe us when we say that we were shocked to find that the improved settings of the red rocket didn’t help it fare any better when riders were asked to rank the bikes in the order that they would purchase them for our final tally. Except for our fastest tester, pro rider Rene Garcia who chose it second, everyone placed the CRF450F at the bottom of their list.

But didn’t the refinements make the bike work better? Of course! The Honda’s powerband is amazing, plain and simple, and thanks to the three different ignition maps that are at the rider’s fingertips, the bike can be powerful and well rounded, smooth and easy to control, or downright exhilarating and super-fast! Make a mistake and allow the bike to fall out of the sweet spot of the powerband? A single stab at the clutch lever brings the bike to life and gets things happening in a hurry. The CRF also has a buttery feeling transmission that shifts with authority, even under power. Thanks to the hydraulic system, the Honda’s clutch pull no longer feels burlier than the rest, and its action is flawless, as well.

Ergonomically, the Honda has a small feel, but the rider triangle is comfortable and easy to grow accustomed to. Taller riders will appreciate the further forward bar position offered in the triple clamp, and the Renthal FatBar has a nice bend. The stock grips have a fat feel, though, and offer less cushion than others.

But what about the bike’s handling character and suspension action? Though the new settings are indeed firmer, the bike has a quick-handling personality that can feel twitchy and hard to trust for some. Of all the bikes in the comparison, the CRF has the shortest-feeling wheelbase and responds the quickest to rider input. Long-time Honda riders will feel right at home on the machine, making directional changes with minimal input. Setting the rear shock sag is critical for finding the ideal blend of razor-sharp handling and acceptable straight-line, high-speed stability. Some of our testers found that running more rear shock sag gave the bike a more predictable and better-balanced feel, as the recommended setup can give the bike its typical stinkbug sensation on the track.

Of course, our findings do not mean that the 2022 Honda CRF450R cannot win at any level in the right hands. None of our test riders disliked the bike per se; they only preferred others more. As we learned last year, the bike can be made to handle amazingly well with some well-thought-out suspension mods. 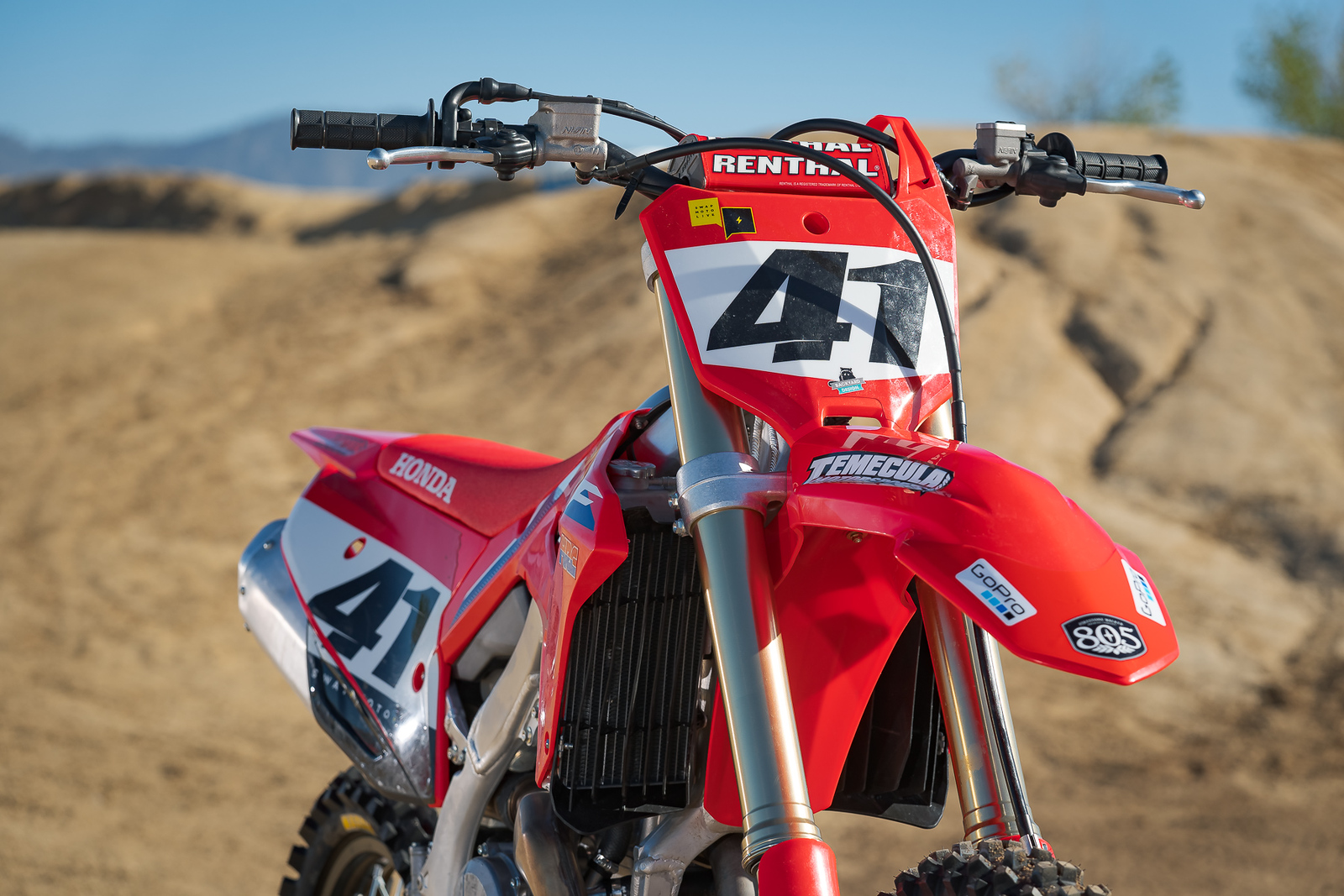 “The Honda has a very powerful feel all the way through the rpm range and the three mapping modes make it perfect to find the right character for any rider.” – Connor Ericsson 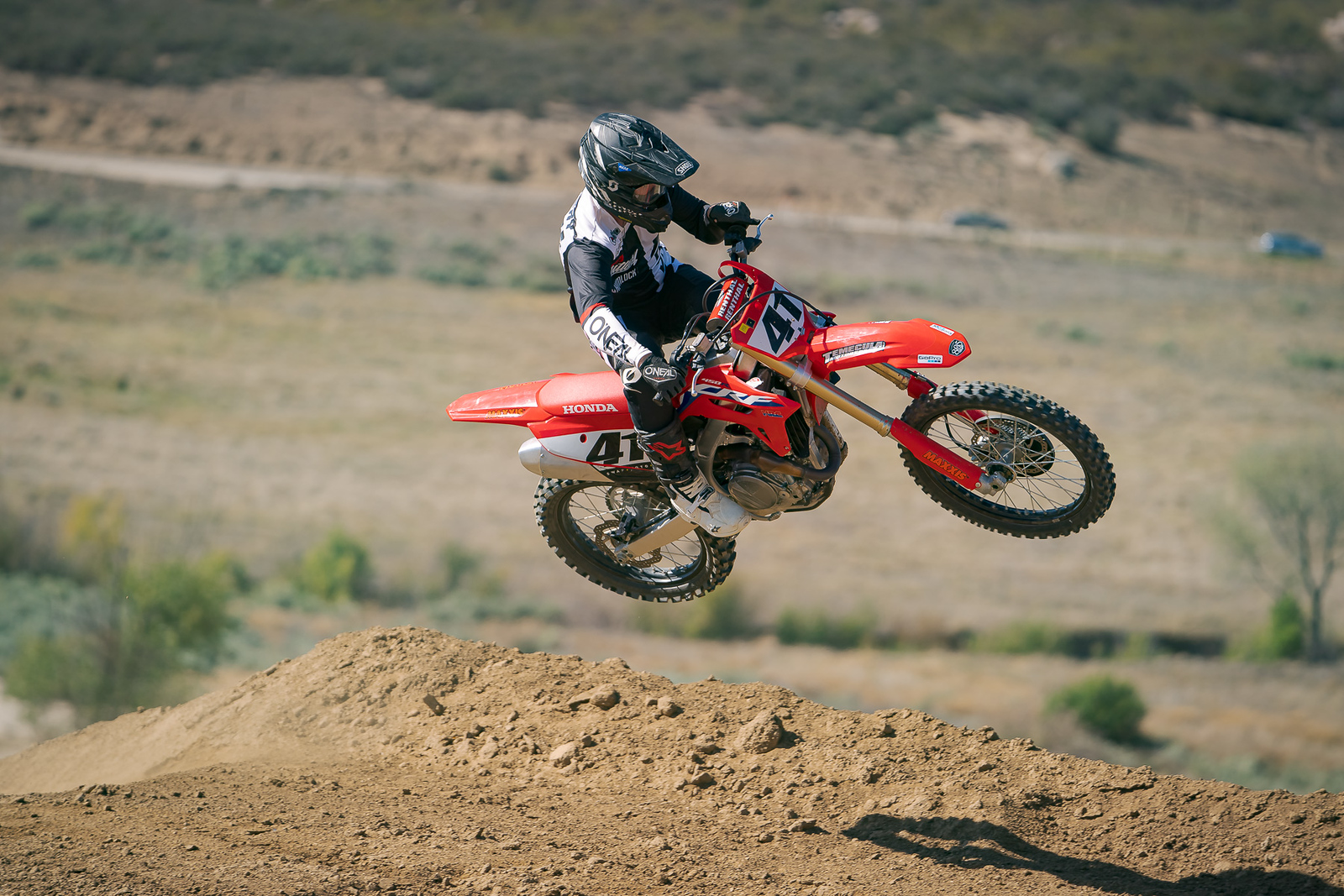 “The CRF is very sharp and busy feeling. You have to always maintain mental focus or the bike will dance on you. You can, however, put it anywhere on the track.” – Connor Ericsson

“The engine is free-revving, fast, and fun to ride. The standard map is manageable at top speeds. The aggressive map seems to have never-ending power but it was not easy to control.” – Kordel Caro 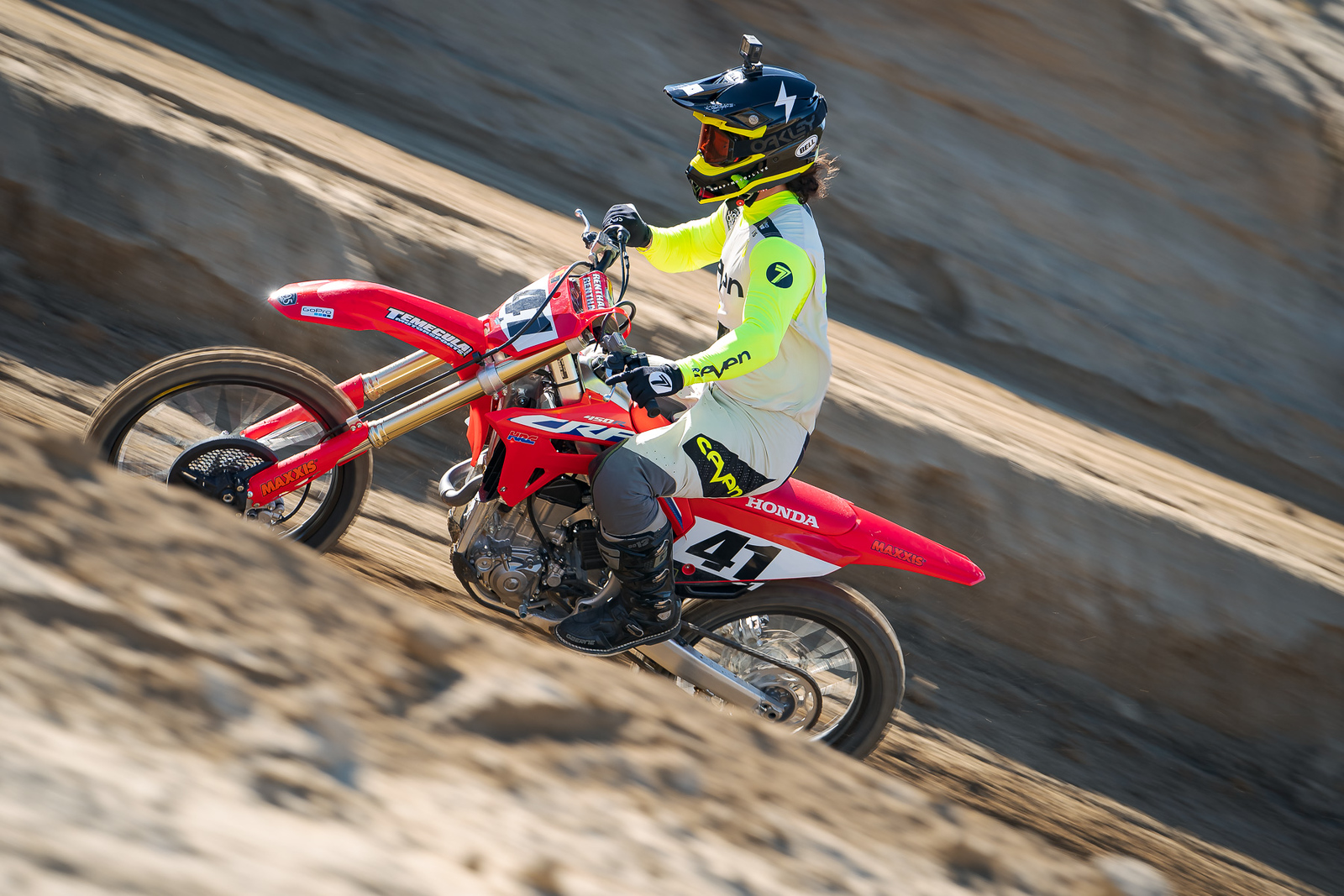 “The suspension didn’t do too many great things for me. I felt on edge at speed on the Honda, and the bike has the least high-speed stability. I wouldn’t pick this bike to race, stock or modified.” – Kordel Caro

“The engine is strong throughout the powerband from low to top, and it is also very free-revving, which I love. I had the most fun while riding the Honda and with some suspension work I would love to race it.” – Rene Garcia 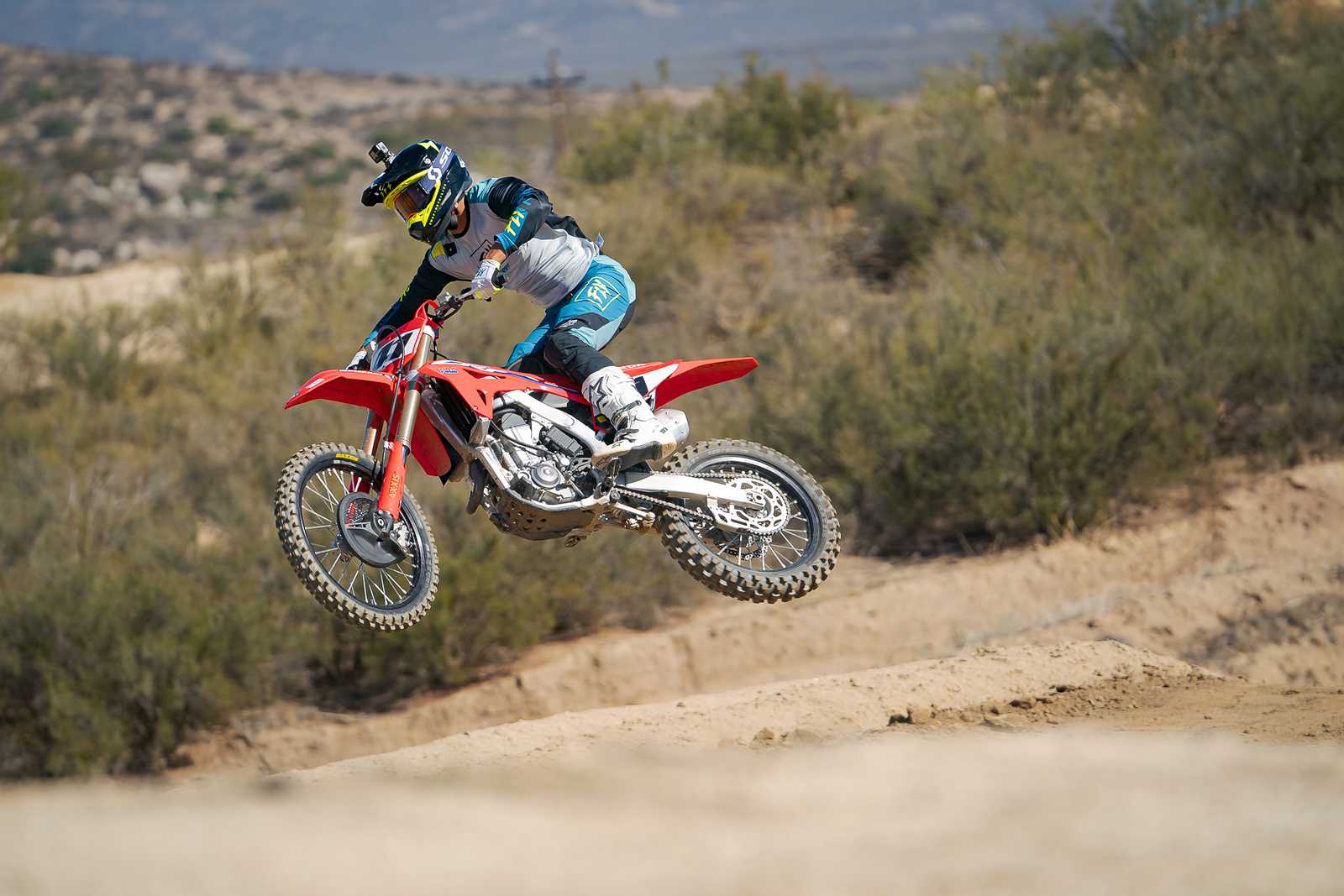 “The CRF is very precise and it feels like the lightest on the track. The suspension feels nice and firm, but it does need more sag in the rear as the bike lacks some high-speed stability.” – Rene Garcia

“Talk about a monster motor! The CRF absolutely rips in map three. The bike ran perfectly for me this year with no bogs or pops, and I had a smile on my face every time I twisted the throttle.” – Donn Maeda 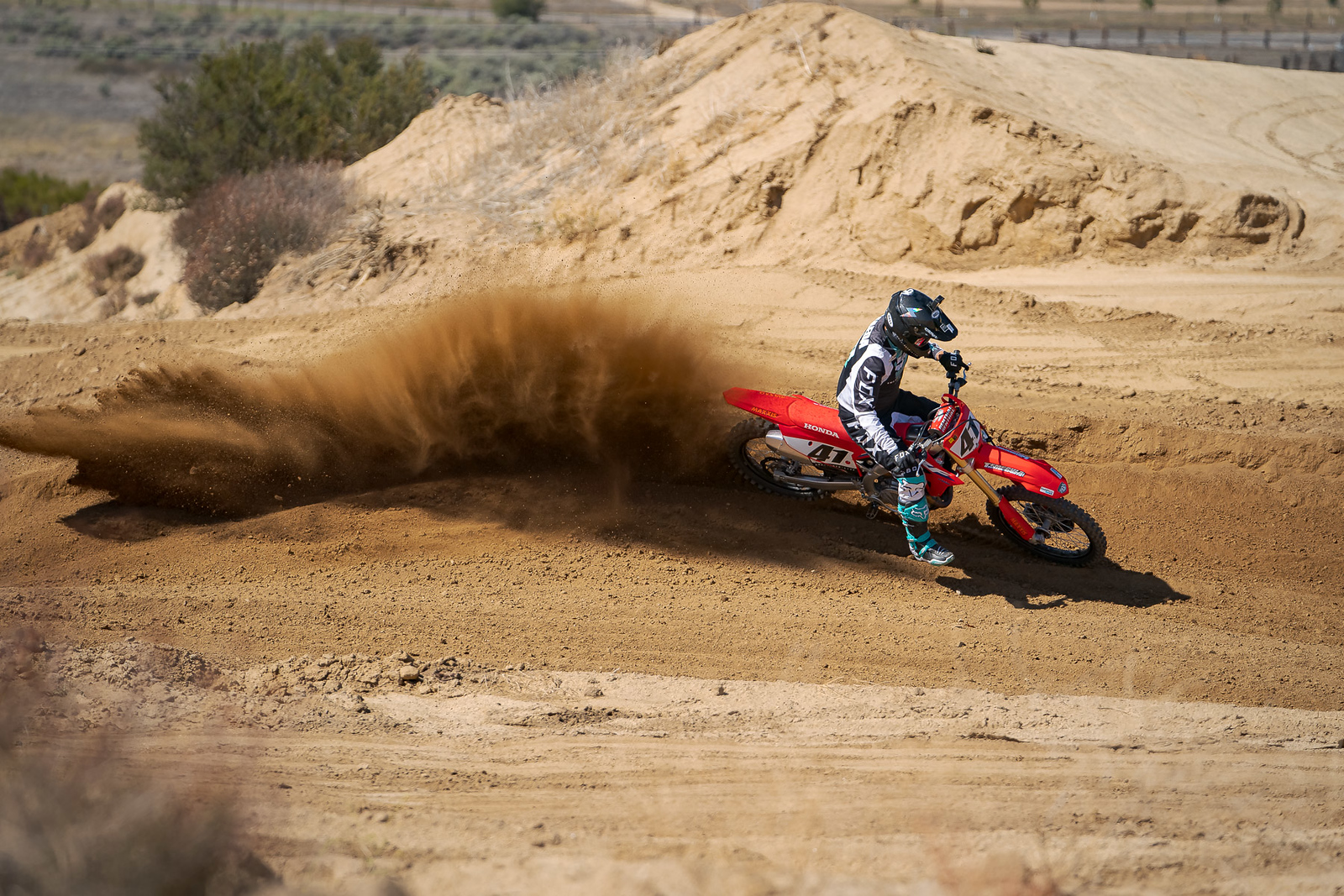 “The Honda is twitchy. I found that lowering the shock sag helped front-end confidence. The bike corners so well that I found myself knifing the front end without the rear end set lower than recommended.” – Donn Maeda

“The CRF is much firmer than last year’s. I actually went out a couple of clicks on compression and rebound to help with the stiff feel of the chassis, but the bike still needs some work.” – Kyle Puerner 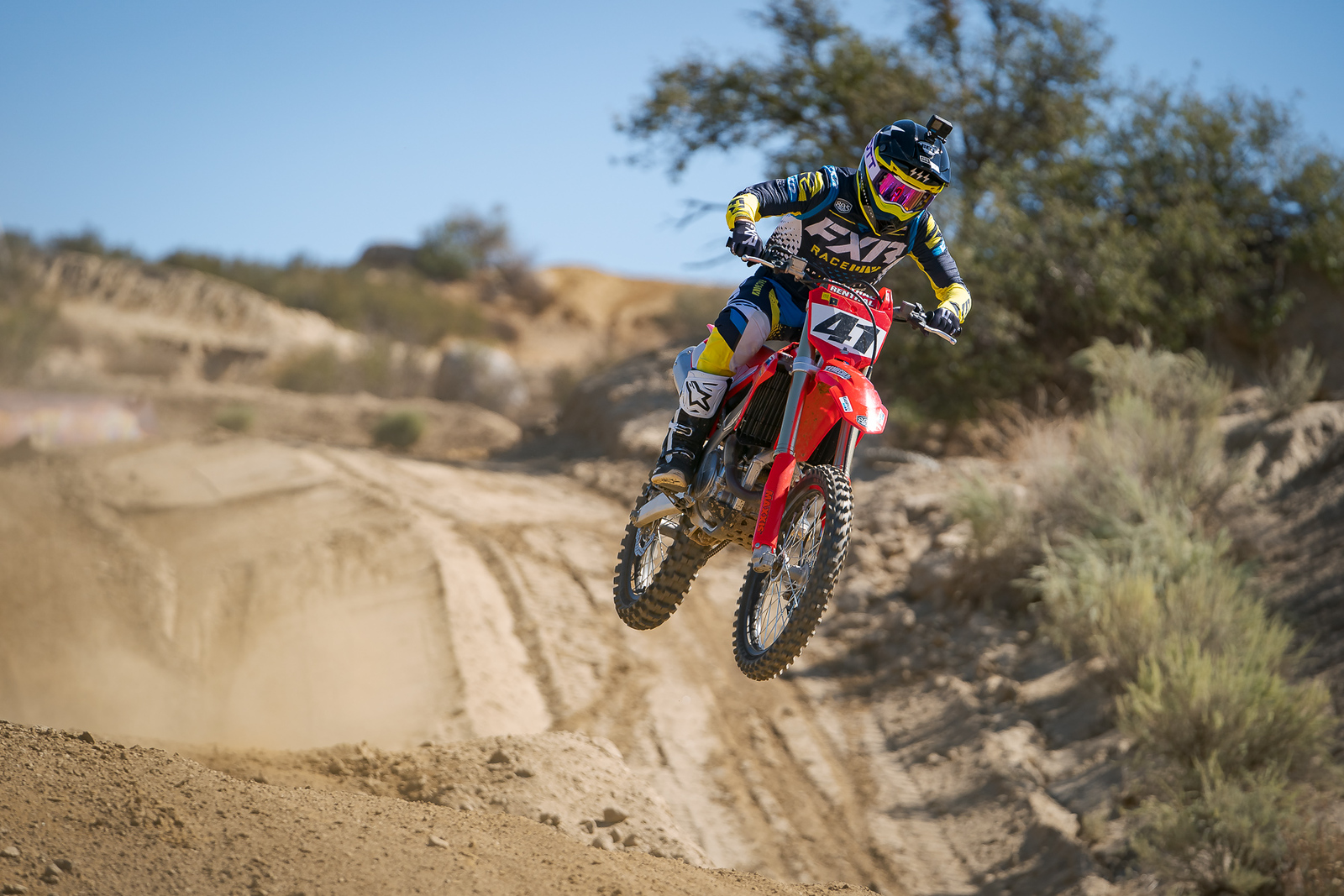 “The engine is very fast with good low end, great mid-range, and decent top-end. I like to ride the Honda at a lower rpm because it vibrates so much with a lot of feedback through the bars and footpegs.” – Kyle Puerner

“The power that the Honda puts out is amazing and I couldn’t ask for more. The Honda stays on the pipe and never falls off! I like the hydraulic clutch and the bike shifted very easy.” – Brian Smith 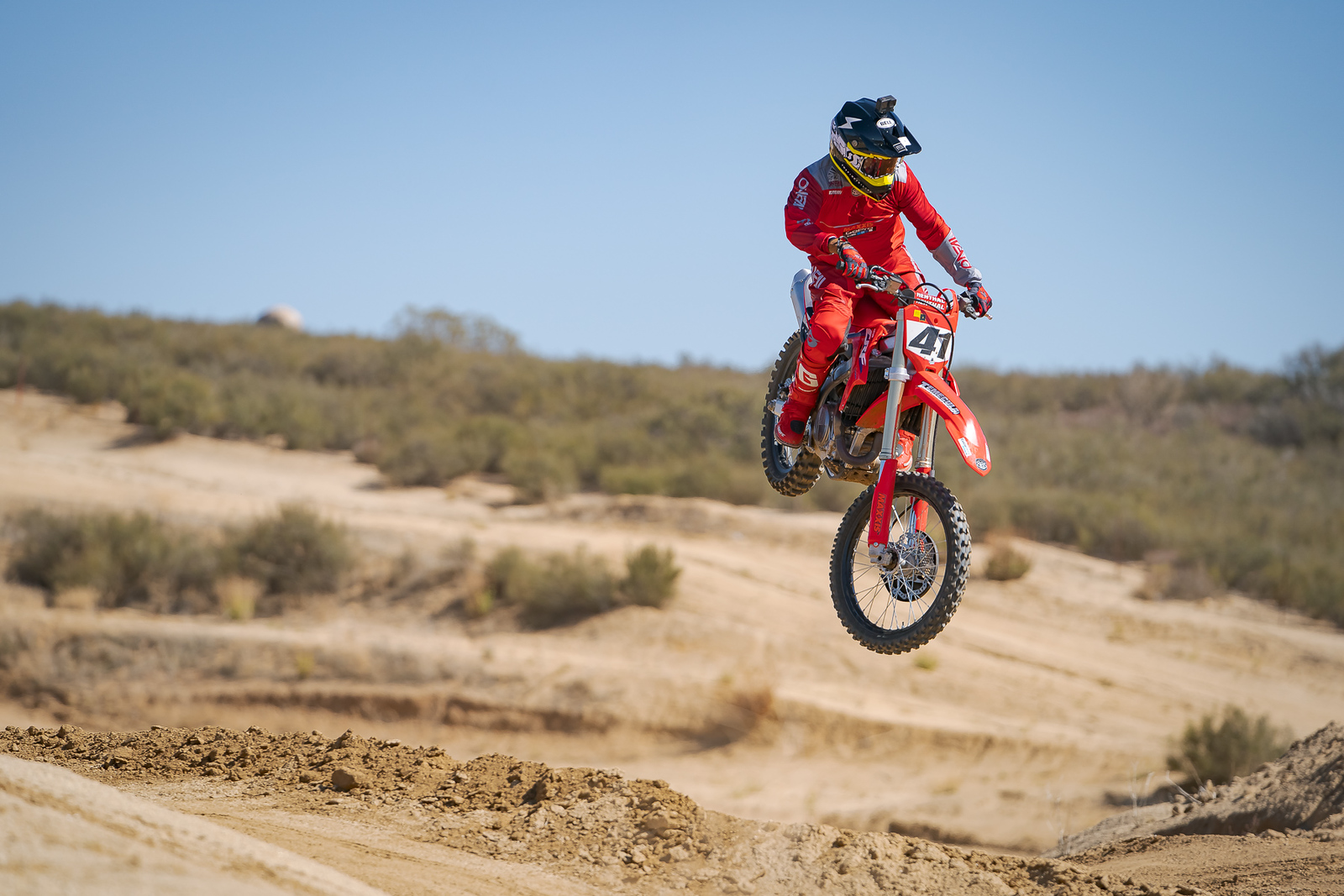 “Man this bike handles like crap! The bike gets the shakes and is too twitchy and unstable for me. I rode last year’s bike with some enzo racing suspension and it was a lot better. As is I have no confidence in the bike.” – Brian Smith