The Honda CRF450R received a slew of refinements for 2023 and that made the bike much more popular amongst our testing staff. As a matter of fact, we’re shocked to see it in fifth place. A stiffer chassis, steel engine hangers, and engine upgrades that are highlighted by a smaller-diameter throttle body for more low-end and smoother power highlight the upgrades made to the red rocket.

Test riders praised the Honda for its super-powerful engine and many noted that the powerband is indeed friendlier and easier to make good use of, thanks to the changes for 2023. While the CRF is still super potent when you crack the throttle, the massive hit that would sometimes unsettle the chassis has been smoothed out into a more-controllable surge of throttle response. The Honda boasts three map settings: standard, smooth, and aggressive, and thanks to the engine refinements, more test riders than ever found the aggressive map to their liking.

As for the chassis updates, the firmer frame and engine hangers actually do allow the suspension to feel more compliant. This year, the CRF450R doesn’t suffer from the “stink bug” feel like last year’s did, and the bike as a whole enjoys better balance and a higher level of rider comfort. As always, the Honda steers with razor precision but lacks a little high-speed stability. Square-edged acceleration chop too is not the CRF’s friend.

As a whole, the CRF450R is noticeably improved for 2023 and Honda die-hards will love it even more than before! 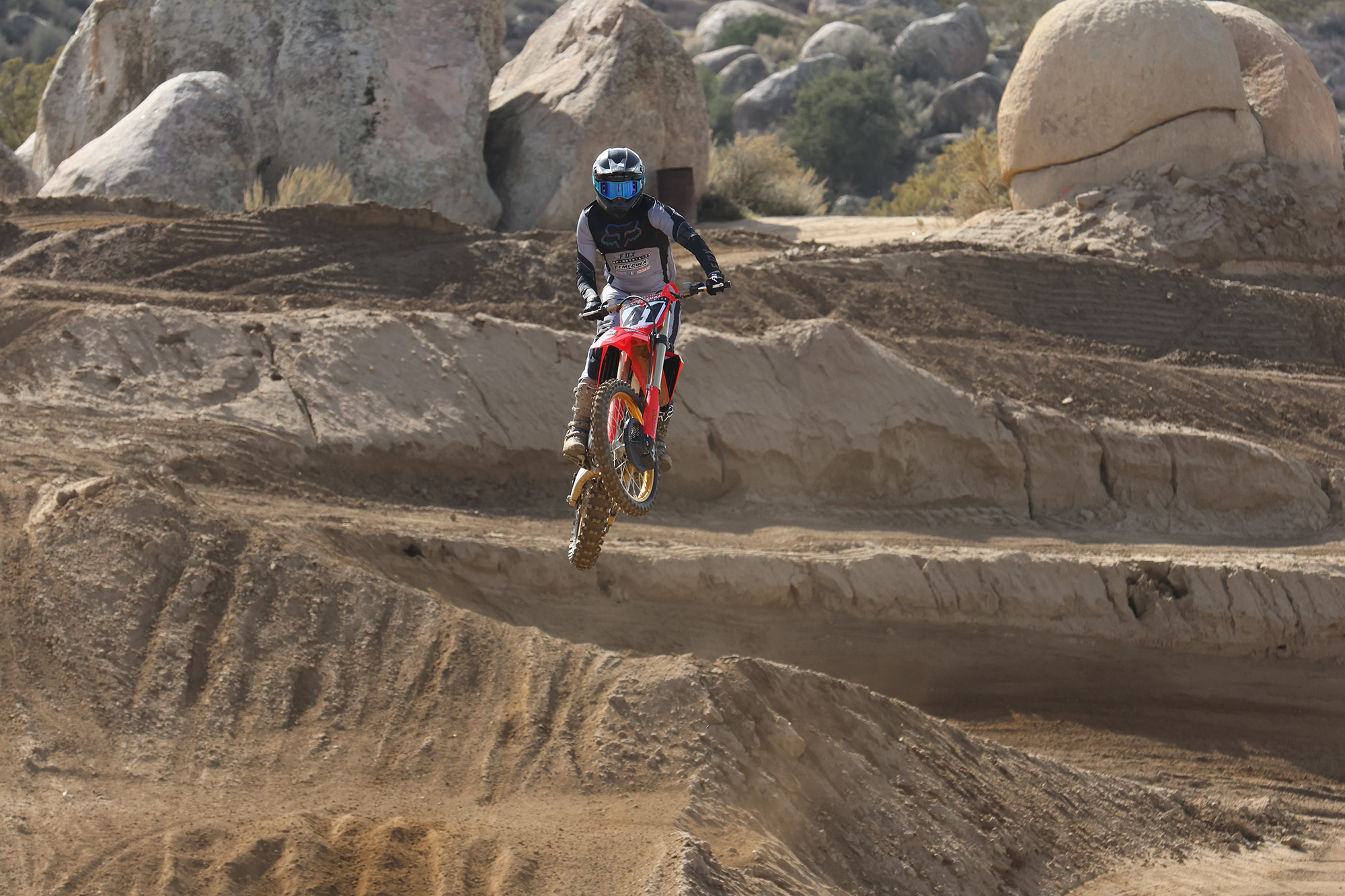 Pat Foster on the Honda CRF450R

“The Honda has one of the most fun and versatile engines in the class. Map 3 is quick, exciting, and offers a ton of low-end punch while maps 1 and 2 are much more modulated and easy to manage. Mid-range is strong and the top-end is good, which rounds out a solid overall package.” – Foster

“Everything about the Honda feels quick. The handling is light, nimble, and aggressive and it is hands-down the best cornering bike in the class. On the track, it is eager to respond to rider input. The downside is that although better than last year, the bike still has the tendency to get twitchy and react to the harsh bumps.” – Foster

“Ergonomically, the Honda is the best in class. The rider triangle is extremely comfortable and the bike feels narrow and easy to move around on. Plus, this thing looks badass in the pits!” – Foster

“Some suspension work and a rear linkage to help lower the rear end would be the first things on my list if I were to race this bike for a season. As for the power, it’s near perfect.” – Foster 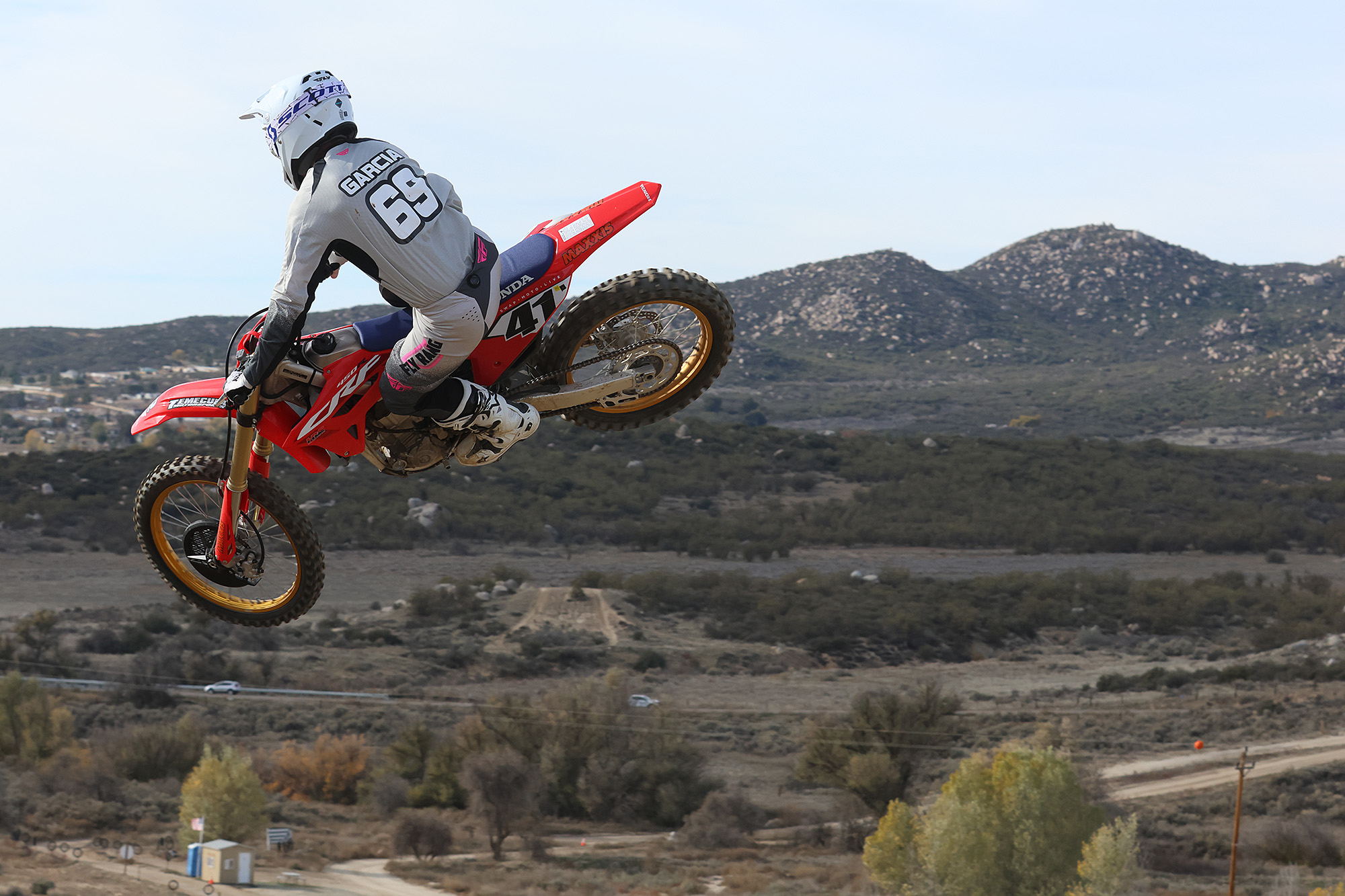 Rene Garcia on the Honda CRF450R

“The Honda CRF450R has a smoother and more-controllable power delivery than last year, and this is my favorite motor in the class by far! The Honda pulls so hard from mid-range to top-end…I love it!” – Garcia

“On the track, the CRF450R has a very light and responsive feel that I love. The bike corners with great precision whether its a rut or an outside line. Sadly, the bike feels really harsh on landings and in braking bumps. It needs more comfort.” – Garcia

“Last year, I worked on the CRF450R after the shootout and made it better with suspension work, aftermarket engine mounts, and different handlebars. Stock, the 2023 bike already feels better than the modified 2022 bike did.” – Garcia

“The CRF has my favorite rider triangle in the class. The distances between the bars, footpegs, and seat are perfect. I feel so comfortable on the Honda and I think it suits smaller riders just as well.” – Garcia 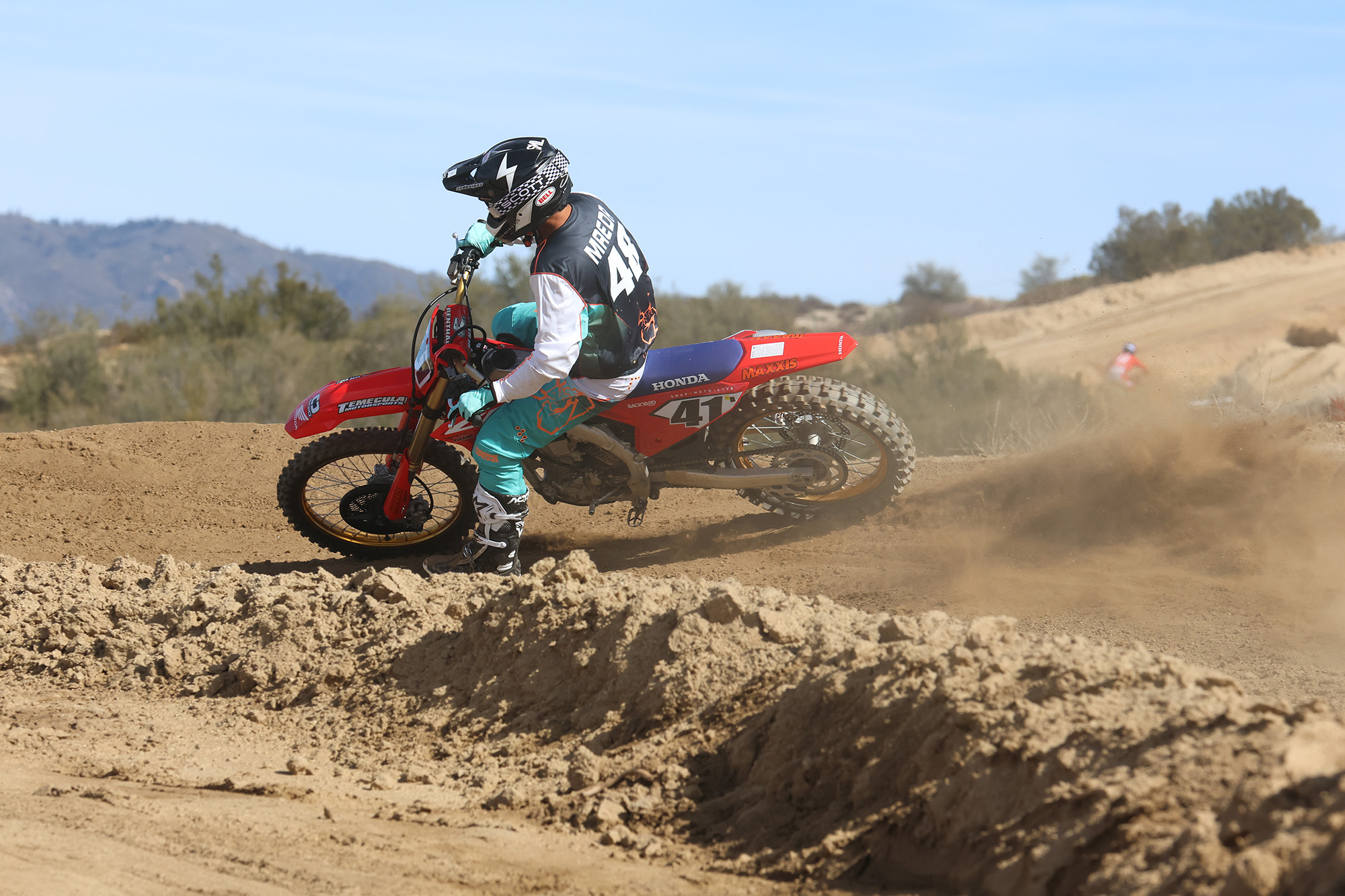 Donn Maeda on the Honda. CRF450R

“This is the best Honda CRF450R that I have ridden in a long while, and I think that the changes made to the 2023 bike were very well placed. The Honda is easier to ride thanks to the engine updates, but it remains lethal when you really twist the throttle.” – Maeda

“Every Honda I have ridden has cornered amazingly well and the 2023 bike is no different. The CRF450R seems to know what you’re thinking and it tips into ruts with ease, slides through the middle, or rails the outside, all with equal composure.” – Maeda

“Ergonomically the Honda takes zero time to get used to. It has a compact feel, but it is far from cramped. It is slim between your legs and making the transition from sitting to standing requires little effort. I do hate the grips, though.” – Maeda

“At least once a lap, the CRF450R will catch my attention in a square edge or on deceleration, as it lacks the comfort and stability that some of the other bikes have. Honda riders are Honda riders and will love this thing. Those used to more stability will cringe.” – Maeda 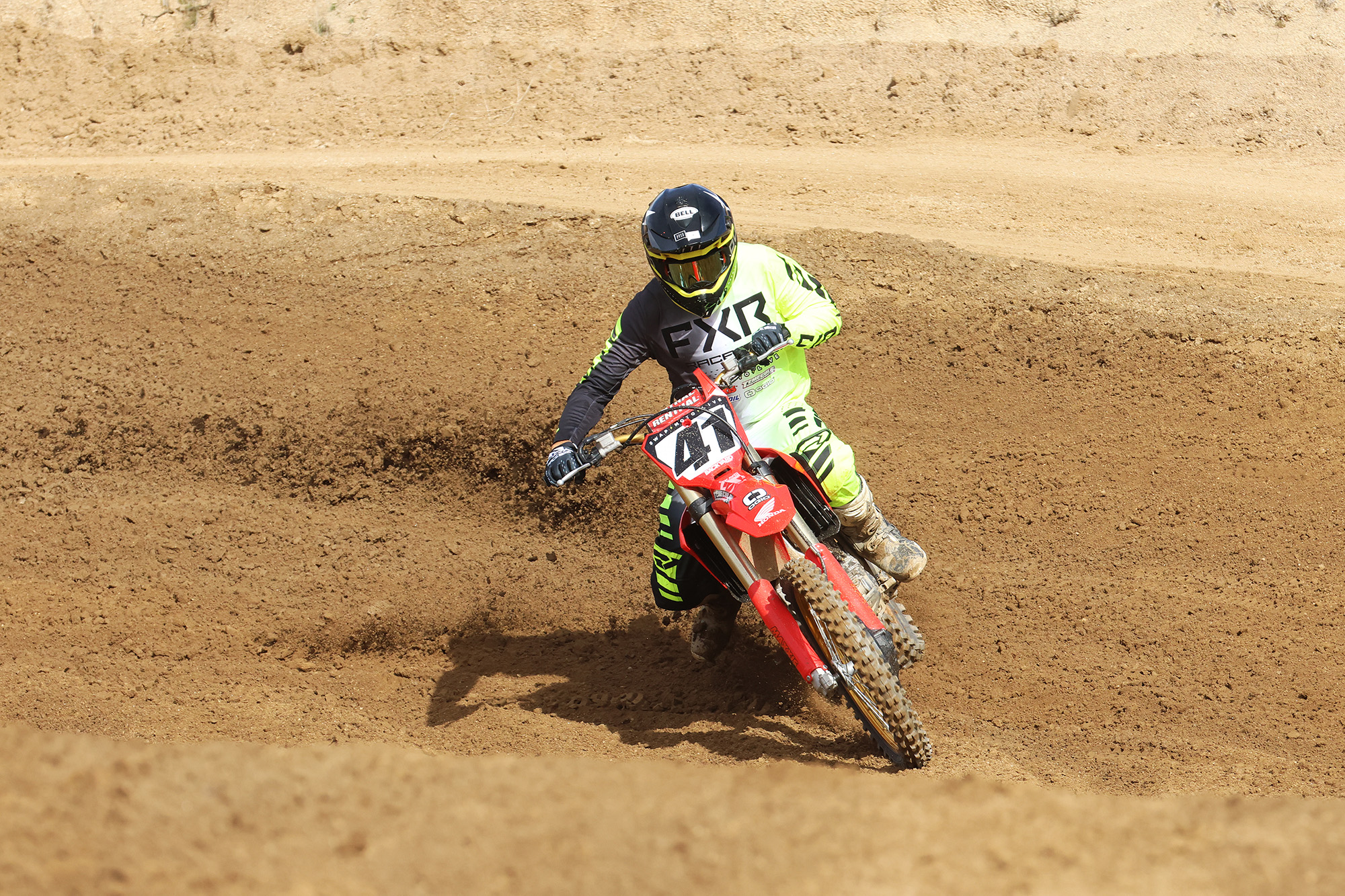 Kyle Puerner on the Honda CRF450R

“Map 1 was the best for me, as map 2 is too mellow and map 3 seemed to upset the chassis with its hard-hitting nature. I don’t really care to ride the CRF450R high in the RPM range as it binds up the chassis and makes the bike react unpredictably in bumps. I trust the bike most while riding it in the lower RPM range as it feels nice and planted.” – Puerner

“I feel like the overall stability of the Honda has been improved the year! The suspension has great hold-up, yet a fairly plush feel. I would need more time on the CRF to feel really comfortable, but this is the best I’ve felt on a Honda in quite some time.” – Puerner

“The Honda is one of those bikes that need to be adjusted for every different track you go to. It is very sensitive to changes, and riders who enjoy tinkering and testing will work best with this bike.” – Puerner

“I love the ergonomics of the Honda as the rider triangle is very comfortable.” – Puerner 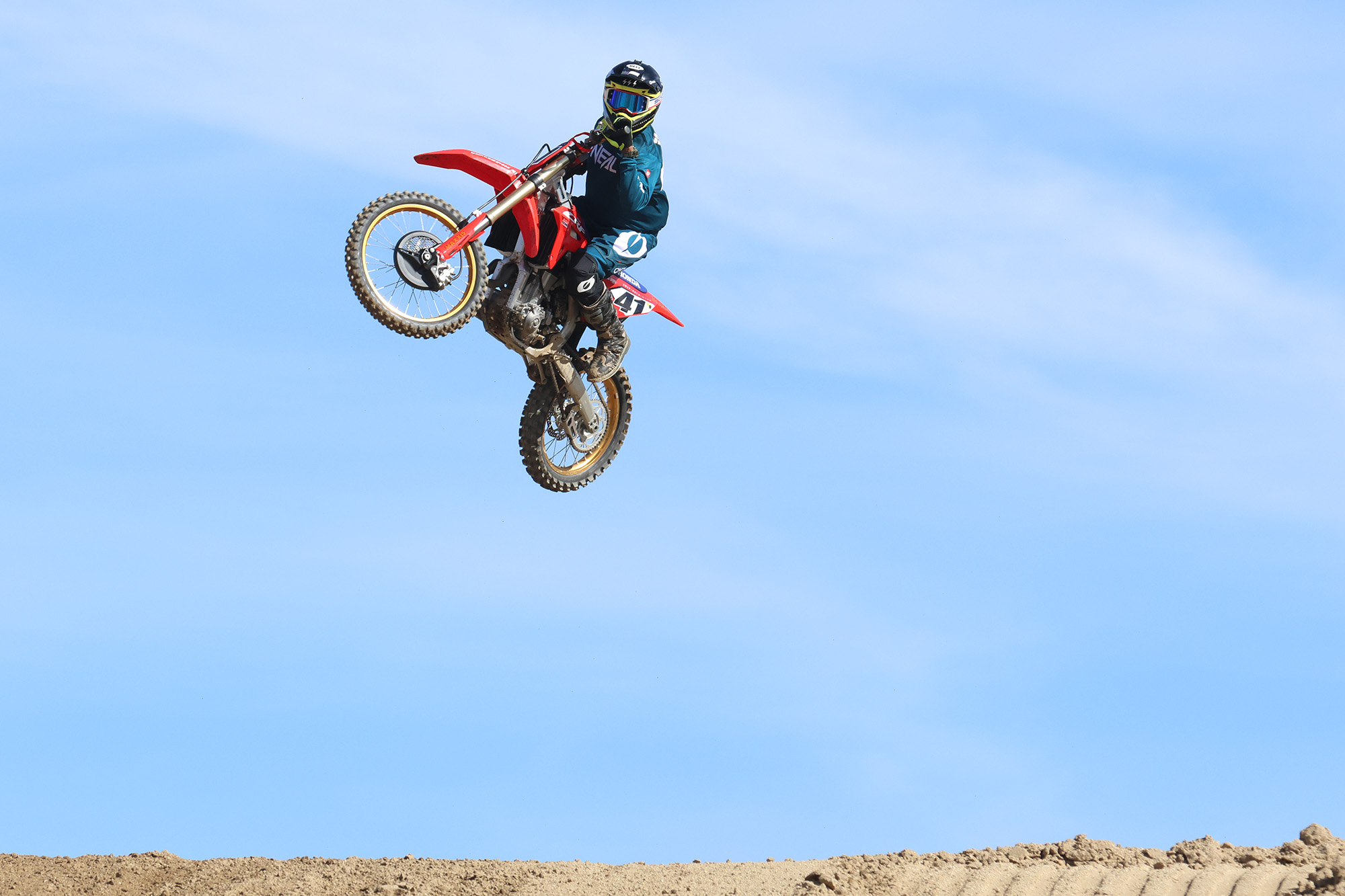 Brian Smith on the Honda CRF450R

“I love the Honda’s power because it is always there when you need it. The bike pulls so hard that it makes up for you if you aren’t that great in the corners. You just have to double clutch it and you’re gone!” – Scrub Daddy

“For me, the bike is stiff and rigid and that’s where it gets me the most. I don’t know if I can trust it enough out of the box to ride it super hard or even race it. It does. things sometimes that catches me off guard.” – Scrub Daddy

“I love the way the Honda looks! Both of them, but especially the anniversary edition bike that we got with the gold rims and the blue seat. Looks just like the bikes Ricky Johnson and David Bailey used to race.” – Scrub Daddy

“The bike itself is really comfortable and I think it is easy to move around on. It also jumps great and does what I want it to in the air because it feels so light. I just need some better suspension settings to feel great on it.” – Scrub Daddy 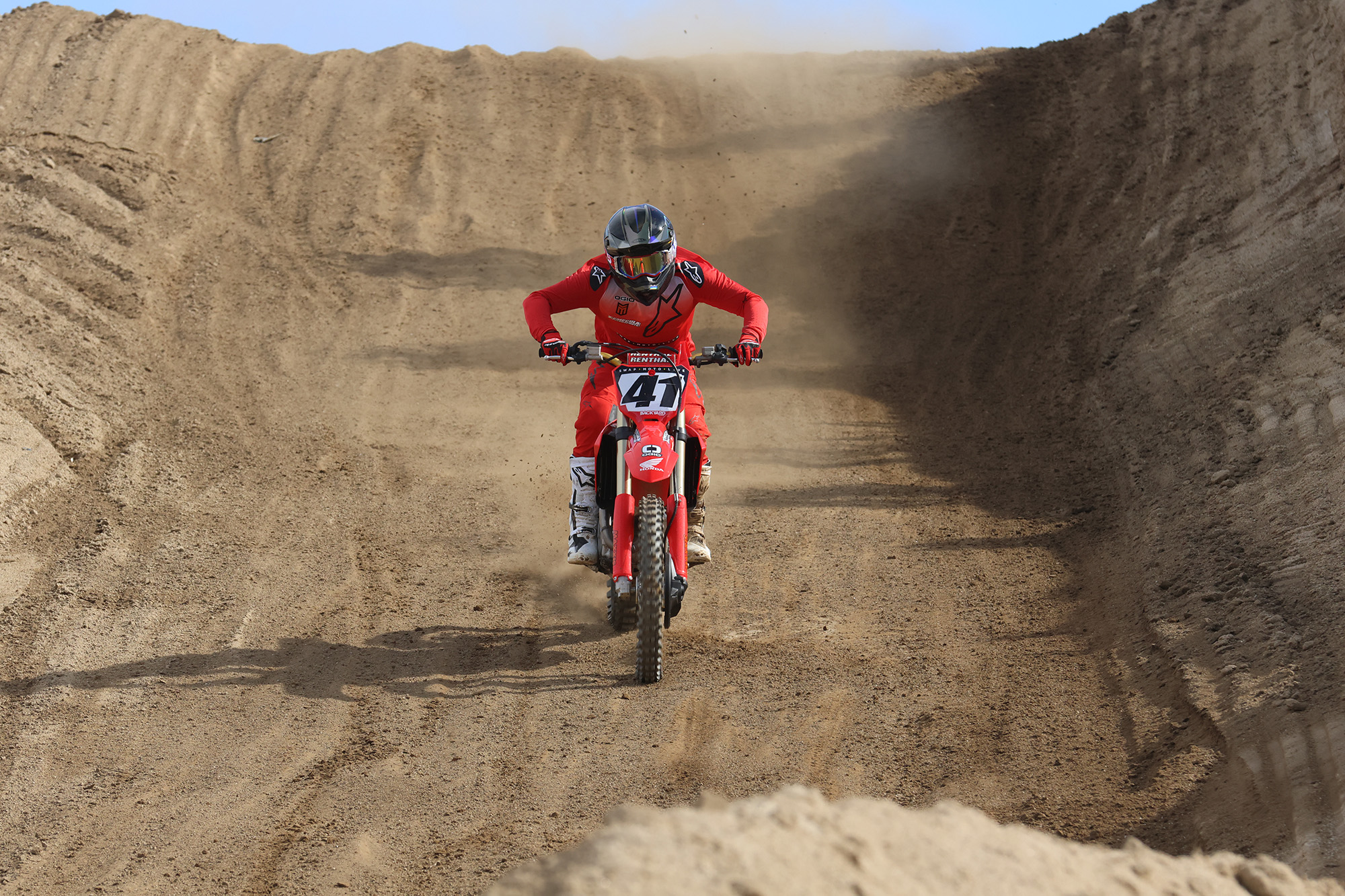 Kyle Vara on the Honda CRF450R

“The Honda engine pulls hard all the way through the entire power curve. It’s strong on the bottom and up into the mid-range. To be honest, I felt like this bike was hard to control because the power was so strong.” – Vara

“I enjoy how light the bike feels on the track, but it is definitely nervous-feeling at speed and entering corners. The bike corners very well, but it feels a little twitchy coming into the corners.” – Vara

“Being on the shorter side, I love the overall feel of the Honda as it is compact and easy to move on. It also feels a lot lighter while riding than it actually is and I appreciate that.” – Vara

“I think that the bike has a front-end bias that needs to be corrected. For me, I would like to have the rear-end squat a little bit more, perhaps with the addition of an aftermarket suspension link or something.” – Vara