Boasting an all-new chassis and powerplant, the 2023 KTM 450 SX-F is a familiar-feeling machine as we have spent plenty of time on last year’s Factory Edition 450 SX-F. Of the three Austrian machines, the KTM truly is the most race-ready and feels bred for competition. Power – and lots of it – is on tap from the instant the throttle is cracked, and the orange bike can yield several different power personalities depending on the map and traction control settings. While map 1 is linear and solid, map 2 is hard-hitting and exciting with a ton of low-end power, massive amounts of mid-range, and top-end that just won’t quit.

The new KTM chassis feels great with a lively feel that feels planted and well-balanced. The bike corners exceptionally well yet exhibit plenty of straight-line stability; impressive for a bike that has such enviable cornering abilities. Paired with the firmer chassis are suspension components with firmer settings that help reduce the wallowy feel that the big KTM used to have. Overall, the bike has a much more positive feel than before.

Ergonomically, KTMs are better than they have ever been. The slim feel makes it easy to move around on, yet there is enough bike to grip between your boots and keep control of the bike in even the roughest of sections. 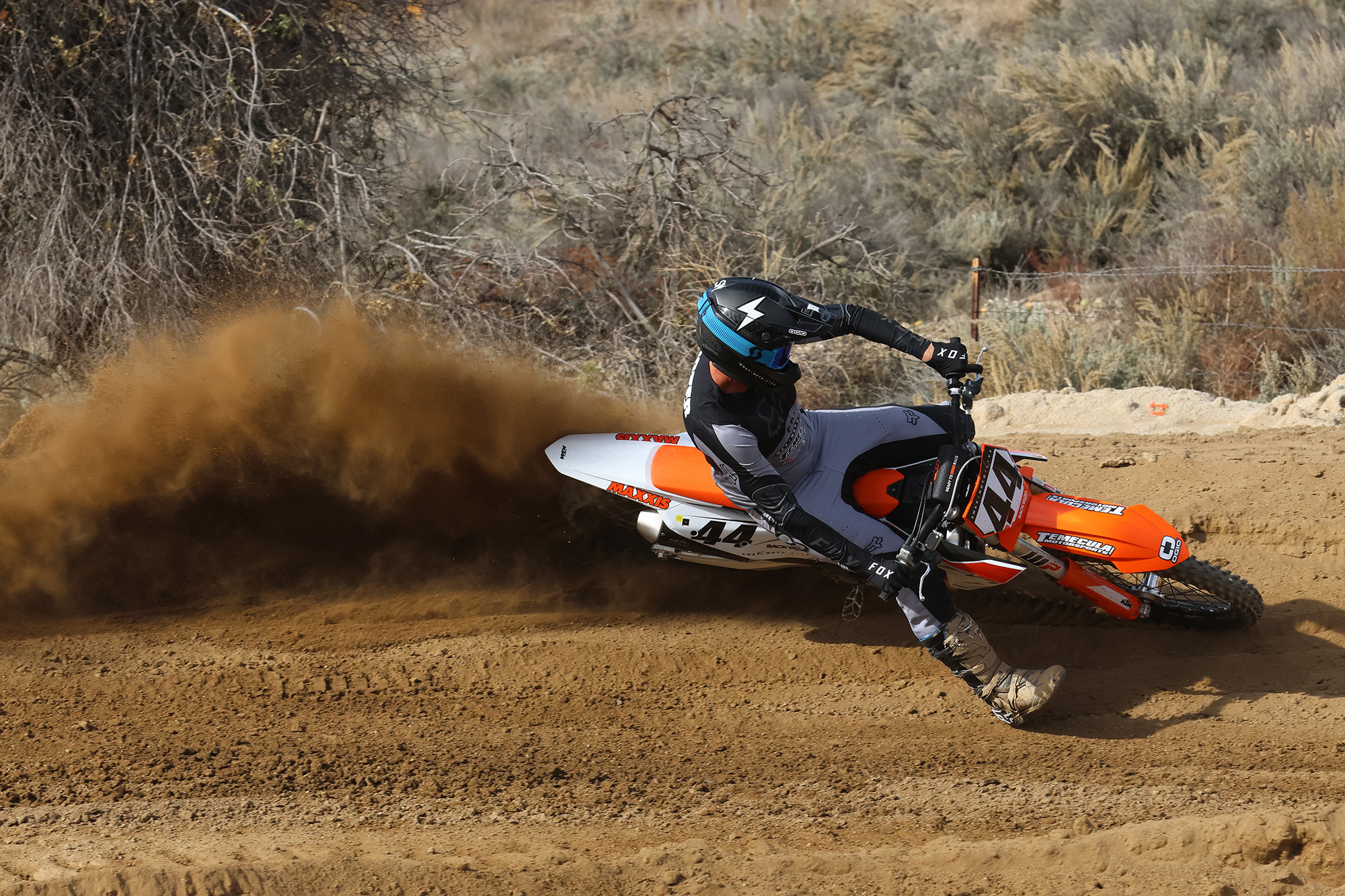 “The KTM 450 SX-F feels like. a locomotive! In map 2, the bike has a ton of grunt and torque right out of the corners but builds quickly into insane mid-range and a ton of top-end. I don’t care for the feeling of the traction control, so I never really utilize it.” – Foster

“I am a fan of the new stiffer chassis as it feels better connected to the track and is more consistent when entering corners. I also like the more substantial suspension settings.” – Foster

“I would not have to change much about the KTM 450 SX-F if I bought one. The air fork system has never been my favorite, but this is the best offering to date.” – Foster

“The new ergonomic package of the new bike is excellent. The bike is comfortable, and feels light and narrow.” – Foster 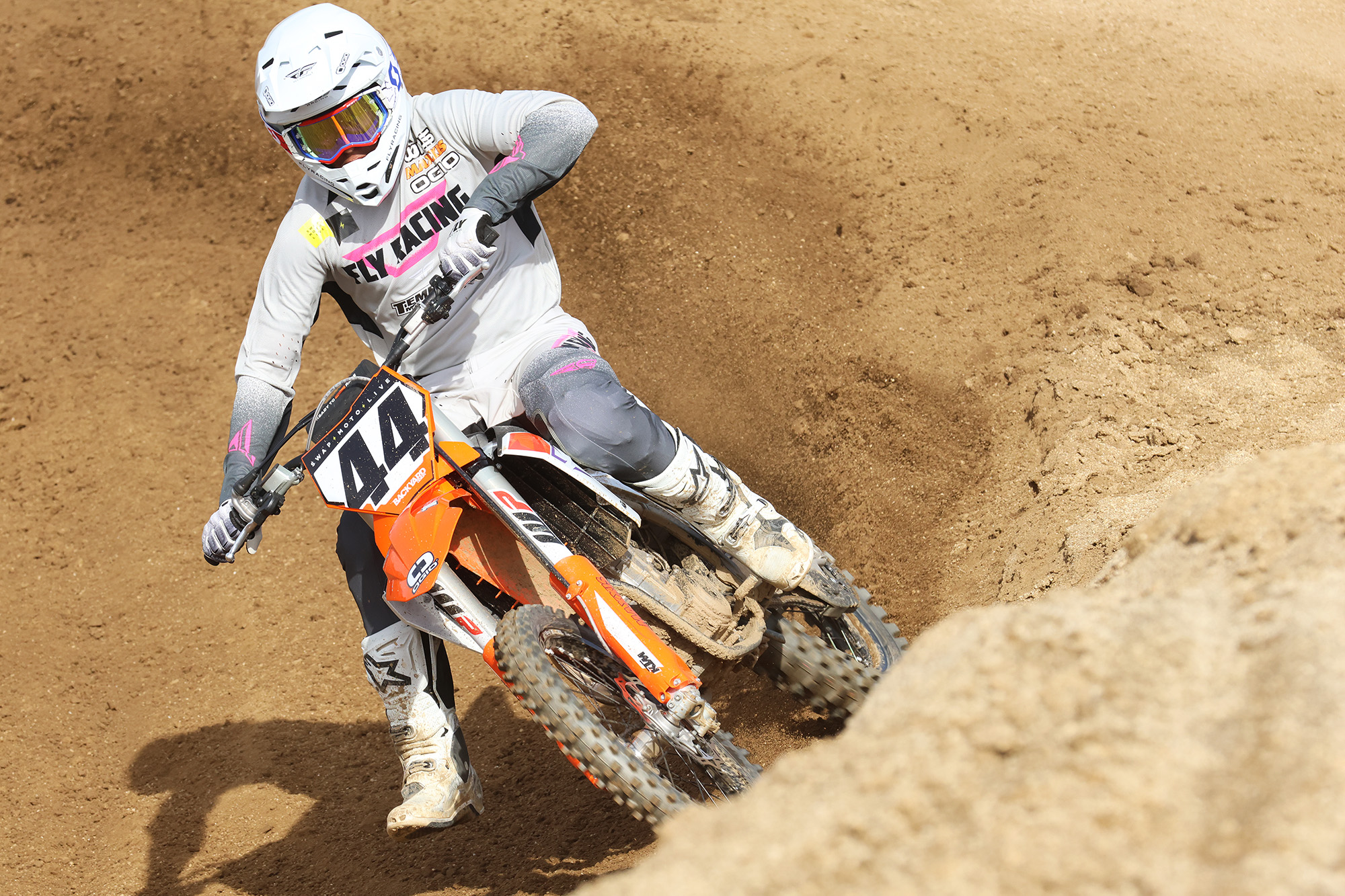 “I absolutely love the KTM 450 SX-F engine! It has really great low-end power, super mid-range, and awesome top-end. The engine is very free-revving and it pulls to the moon without any holes in the powerband.” – Garcia

“Both ends of the suspension have a plush feel but have good holdup. The bike is very stable and well-balanced. I trust this bike completely.” – Garcia

“I honestly don’t have anything to complain about when it comes to the KTM 450 SX-F. I loved the 2022 Factory Edition bike and after testing it, I had a hard time riding my own 450. This 2023 is everything last year’s Factory Edition was….awesome!” – Garcia

“The new KTM ergonomics are super comfortable and I also love the way the bike looks. The new bodywork is aggressive and seamless with no places to snag your boots or pants.” – Garcia 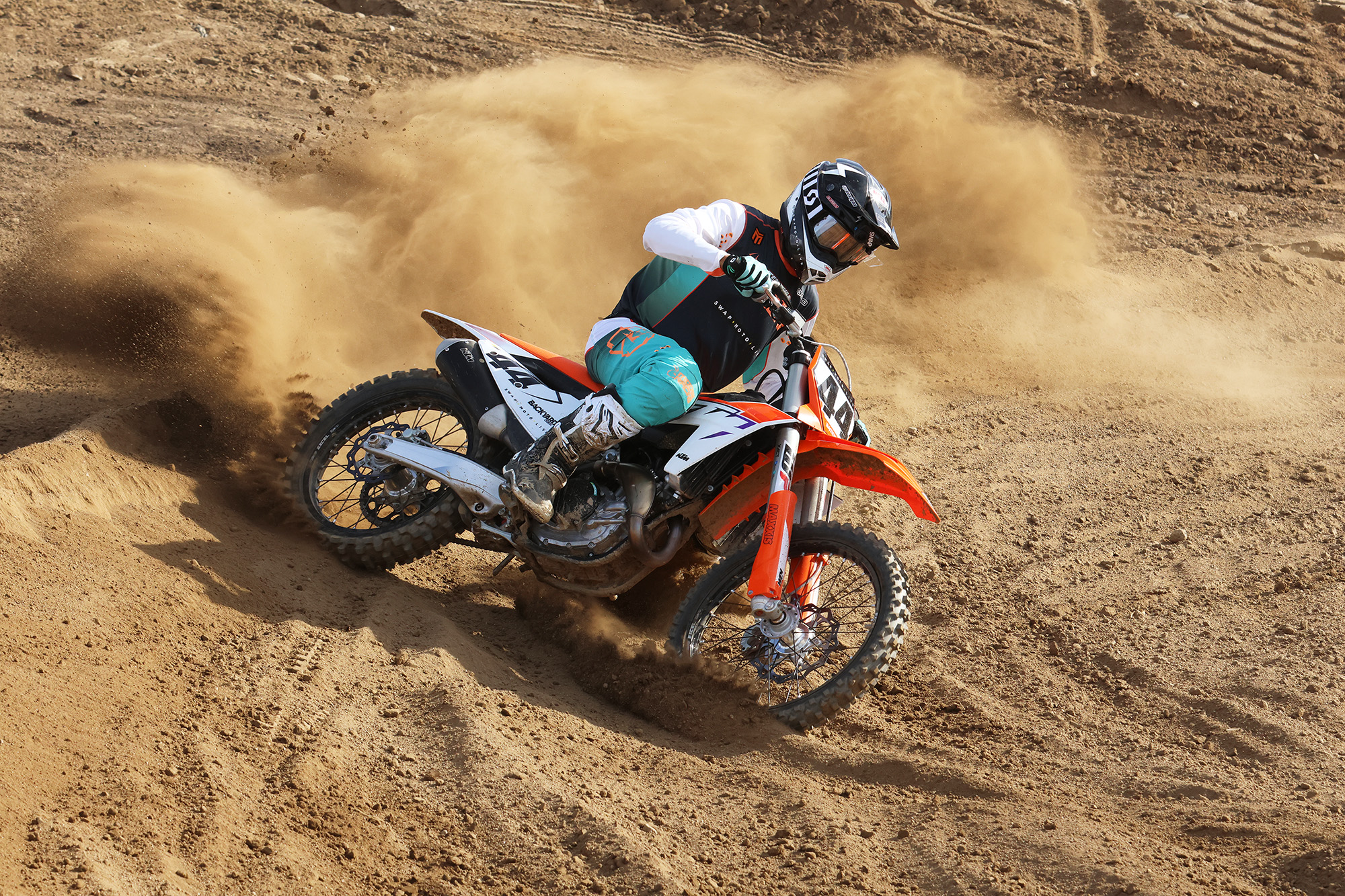 “This is by far, the most I have ever liked the KTM 450 SX-F. The bike is free-revving and lighter feeling than its Austrian brothers…and this helps the bike to handle better, too.” – Maeda

“I am always impressed with how well the bike exhibits both stability and a nimble feel in the corners. The KTM is just at home diving into a rut as it is blasting an outside line, and it can also change lines easily, too.” – Maeda

“You know what I really don’t like about all of the KTMs? The combination start and stop button on the right side of the bars. While I agree it’s a good idea to free up some room on the bars, the buttons are recessed and easy to get mixed up in an intense moment, like stalling during a race.” – Maeda

“Power is never an issue with the KTM 450 SX-F as there are no holes in the bike’s powerband. I don’t see any reason to ever look for more power out of this bike.” – Maeda 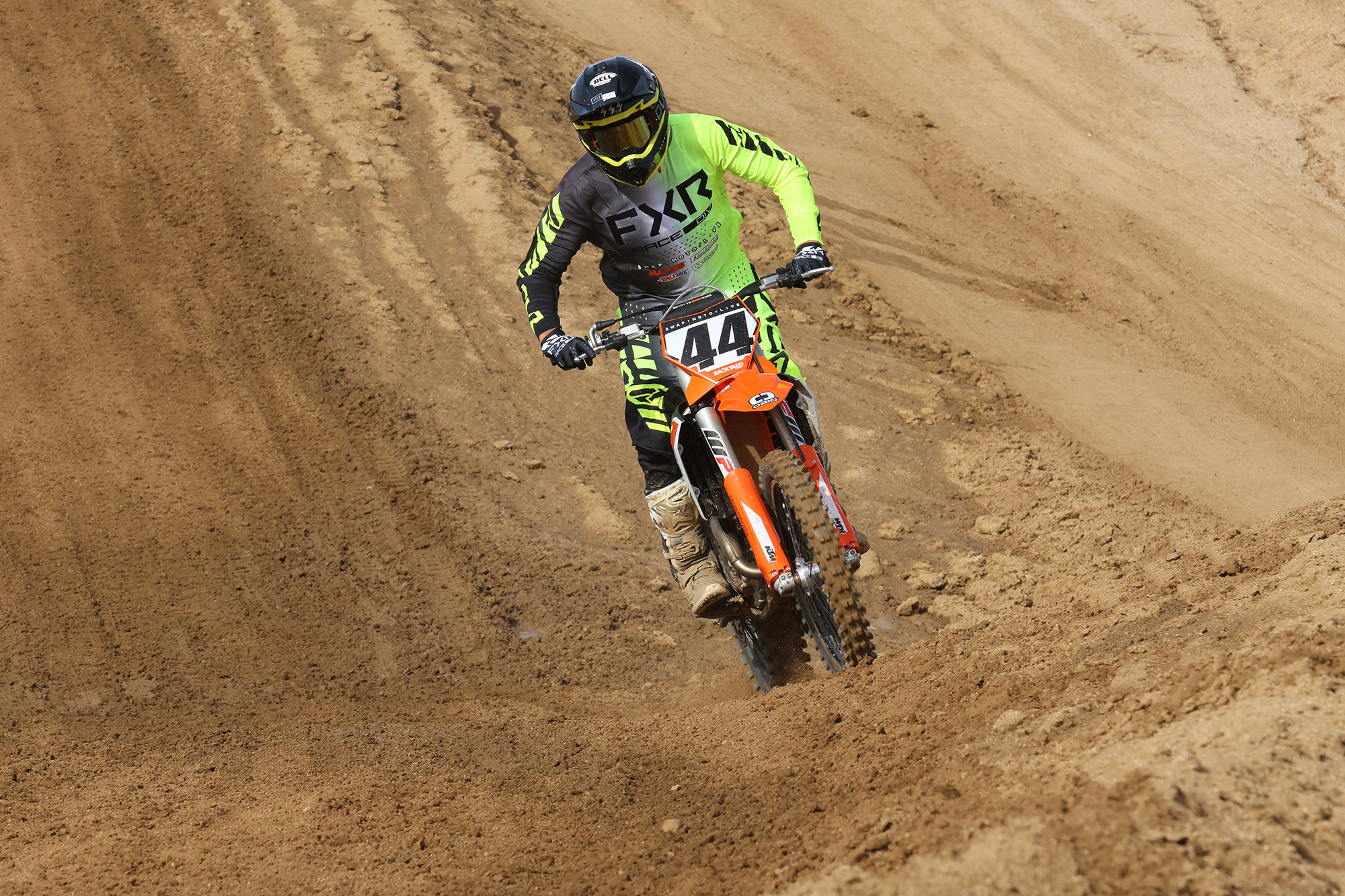 “The engine makes plenty of power and map 1 is very manageable. Map 2 hits a lot harder and produces a more exhilarating power delivery, but it can get away from you. I like to ride in map 2 with. the traction control on.” – Puerner

“I’ve noticed that of the three Austrian bikes, the KTM has the most engine vibration transferred to the rider through the bars and footpegs. Not that big of a deal, but in a long day of riding it can wear on you.” – Puerner

“I am really impressed with the stock suspension on the 450 SX-F. It is very tuneable and it has good holdup. I have raced the 2022 Factory Edition all year with stock settings and am completely pleased with them.” – Puerner

“The bike has a light feel, yet it is still very stable at speed. Racey is the word I would use to describe the SX-F’s handling character.” – Puerner 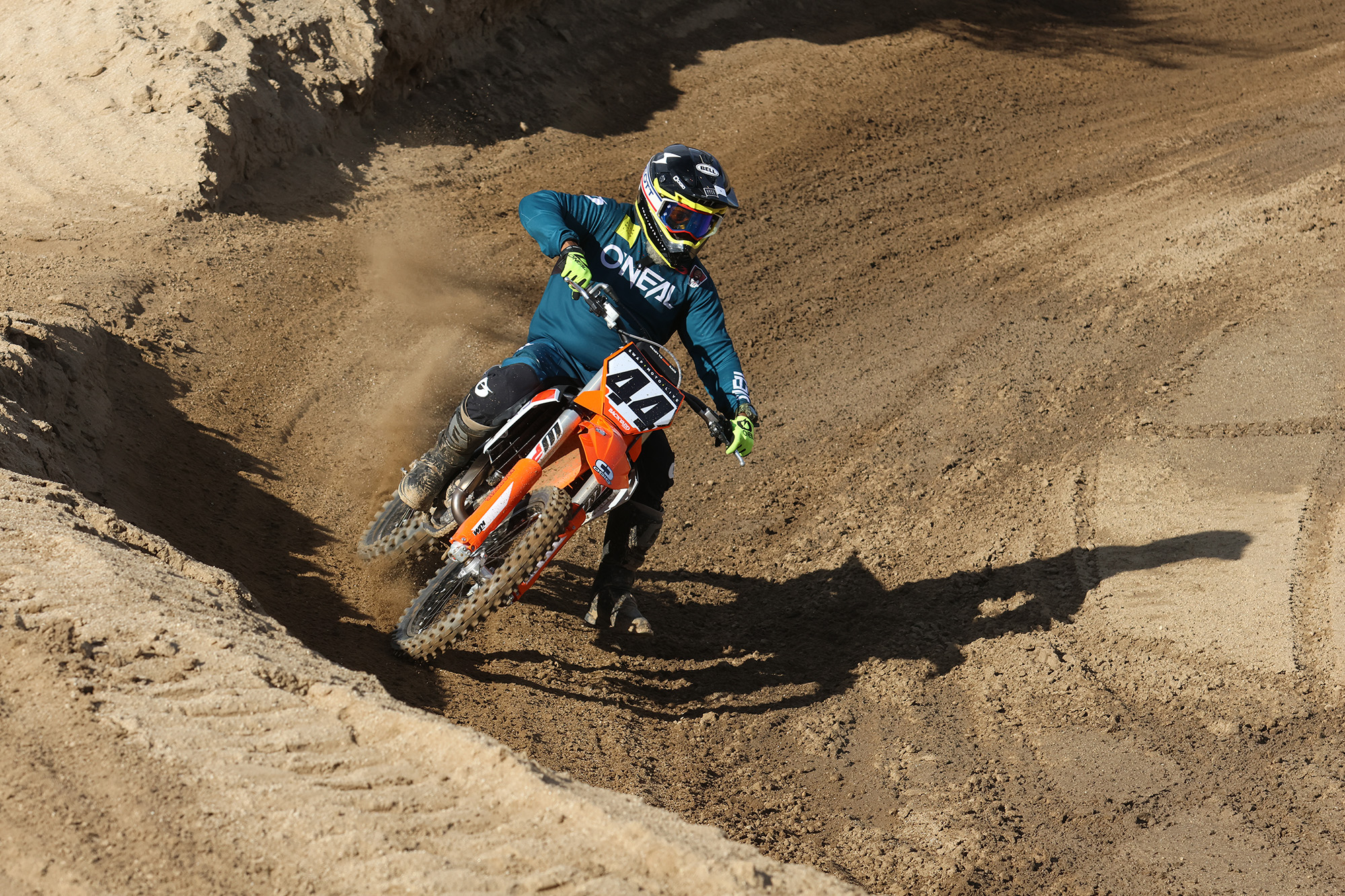 “The KTM 450 SX-F has plenty of power everywhere! I like map 2 because it is exciting and really comes on when you hit the clutch.” – Scrub Daddy

“I really like the Quick Shift feature the bike has because you can shift the bike under power without touching the clutch. Some of the other guys thought it made the bike hesitate a little bit but it didn’t feel that way to me.” – Scrub Daddy

“I got a little head shake in bumps, but overall the KTM is mostly stable and man it corners great! I can trust this bike completely.” – Scrub Daddy 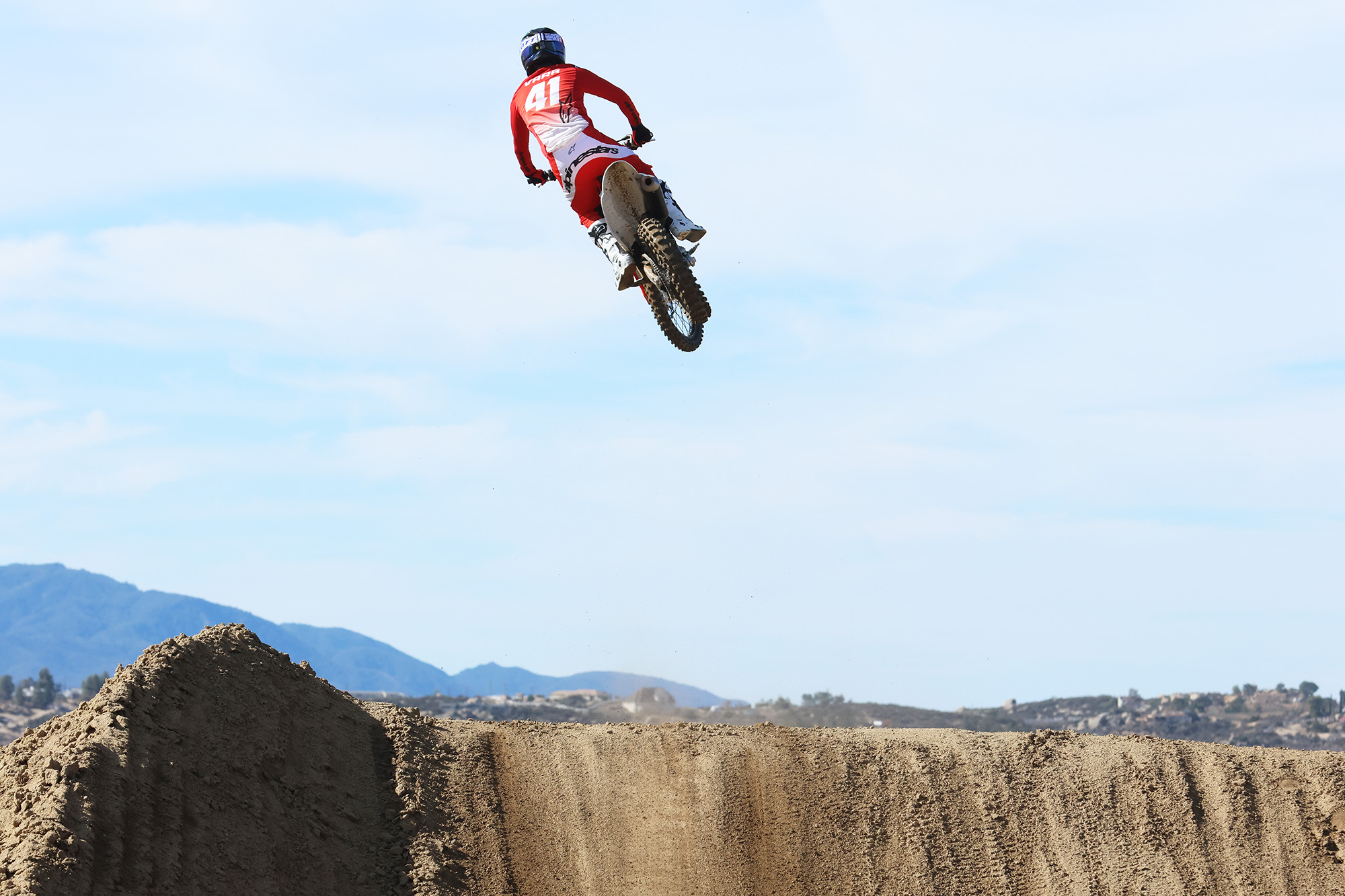 “The KTM 450 SX-F has the strongest engine in the class for 2023. It hits hard and has plenty of punch everywhere, but it can be a little hard to control if the track is rough or slippery.” – Vara

“The suspension is plush and the bike is very impressive. It is stable at high speed and it corners well, too. A great mix of stability and precision.” – Vara

“The KTM has a light and nimble feel, and the bike is easy to throw around.” – Vara

“I dropped the fork in the triple clamp to take a little weight off of the front end and it gave the bike a perfect balance.” – Vara

“The seat cover needs more grip. For a bike this powerful, they should have a nice gripper cover. Other things I would change are the handlebars and grips.” – Vara