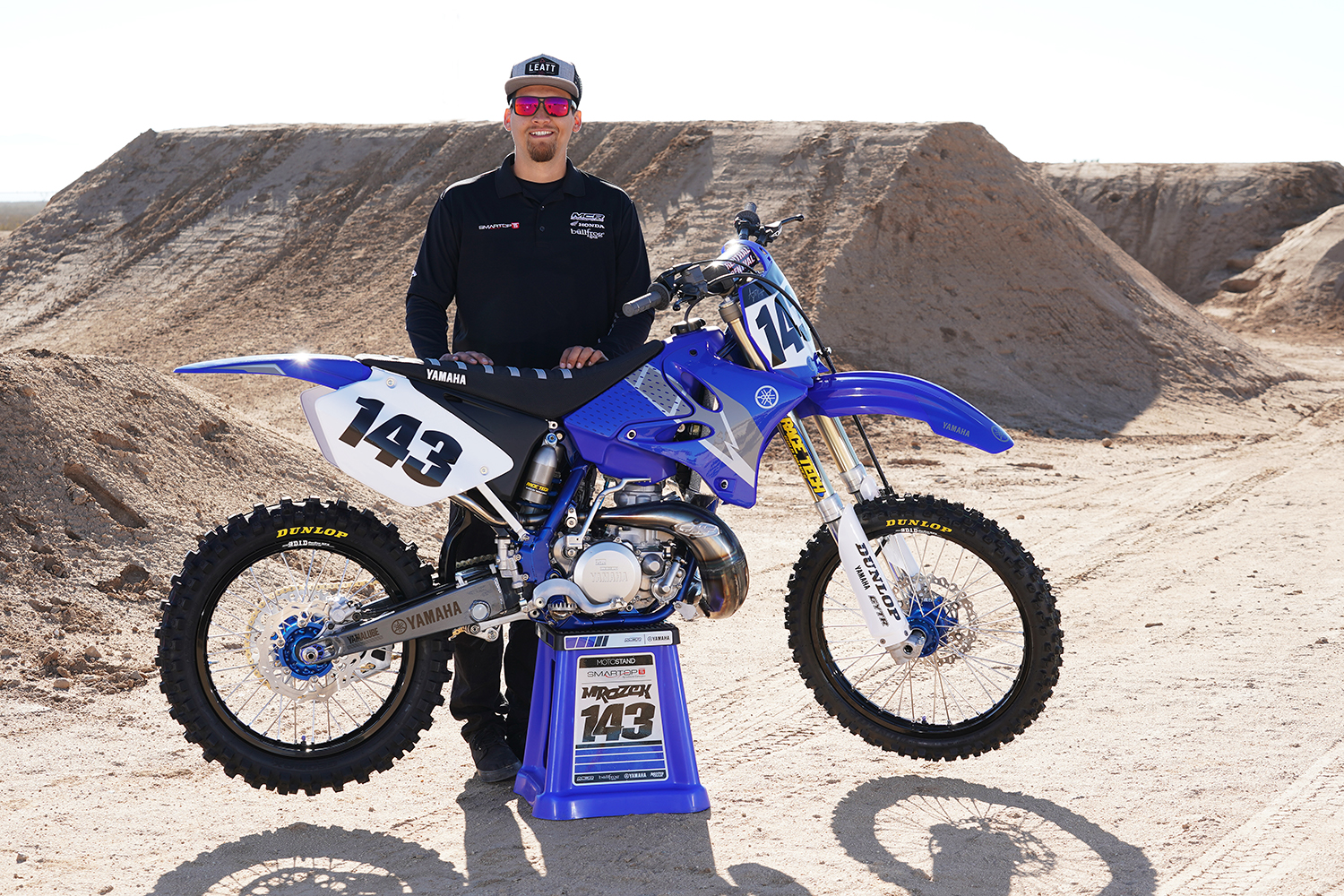 Ever wonder how many of the mechanics at the pinnacle of our sport enjoy riding when they’re not at the races? And what kind of bikes do they have? Aaron Mrozek is Shane McElrath’s mechanic on the Motoconcepts/Bull Frog Spas/Honda racing team, and he’s put a lot of effort into his 2004 Yamaha YZ250 and it shows. The bike is an absolute work of art, so we asked him to tell us the story behind his nice-looking machine!

“I came into motocross a little later than most. With my timing and a little lack of knowledge, two-strokes were already a thing of the pasty by the time I was addicted to motocross. I didn’t ride my first dirt bike until 2009, a Honda CRF250R. It was a moment I will never forget; pulling onto the track for the first time. I was terrified! A few corners in, a guy on a bone-stock Yamaha YZ250 blew my doors off. It was the coolest thing to me! The smell, the sound…all of it was burned into my brain! That inspired me to own a YZ250 someday. That day came to life about 10 years later when I picked up a 2004 Yamaha YZ250 for $2000. 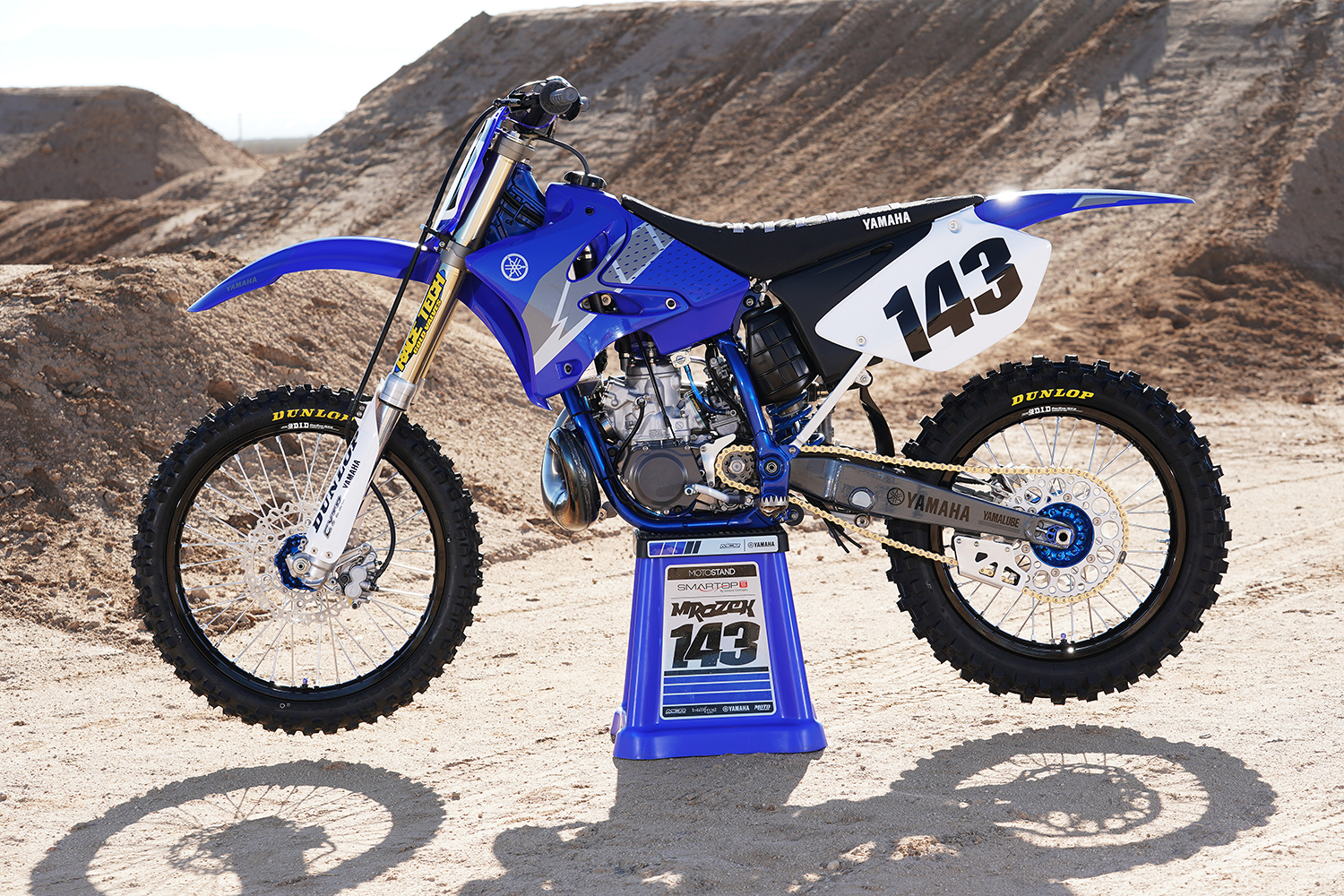 It was beat, but perfect for the dez riding it was designated to do. It had been ridden hard and put away wet. When it finally came time to do some real maintenance work, I decided to go all out! Why not build it into a dream bike? I wanted this bike to be what a 2004 Yamaha YZ250 Factory Edition would have been. I was going for a clean and simple OEM look and didn’t want something too flashy. 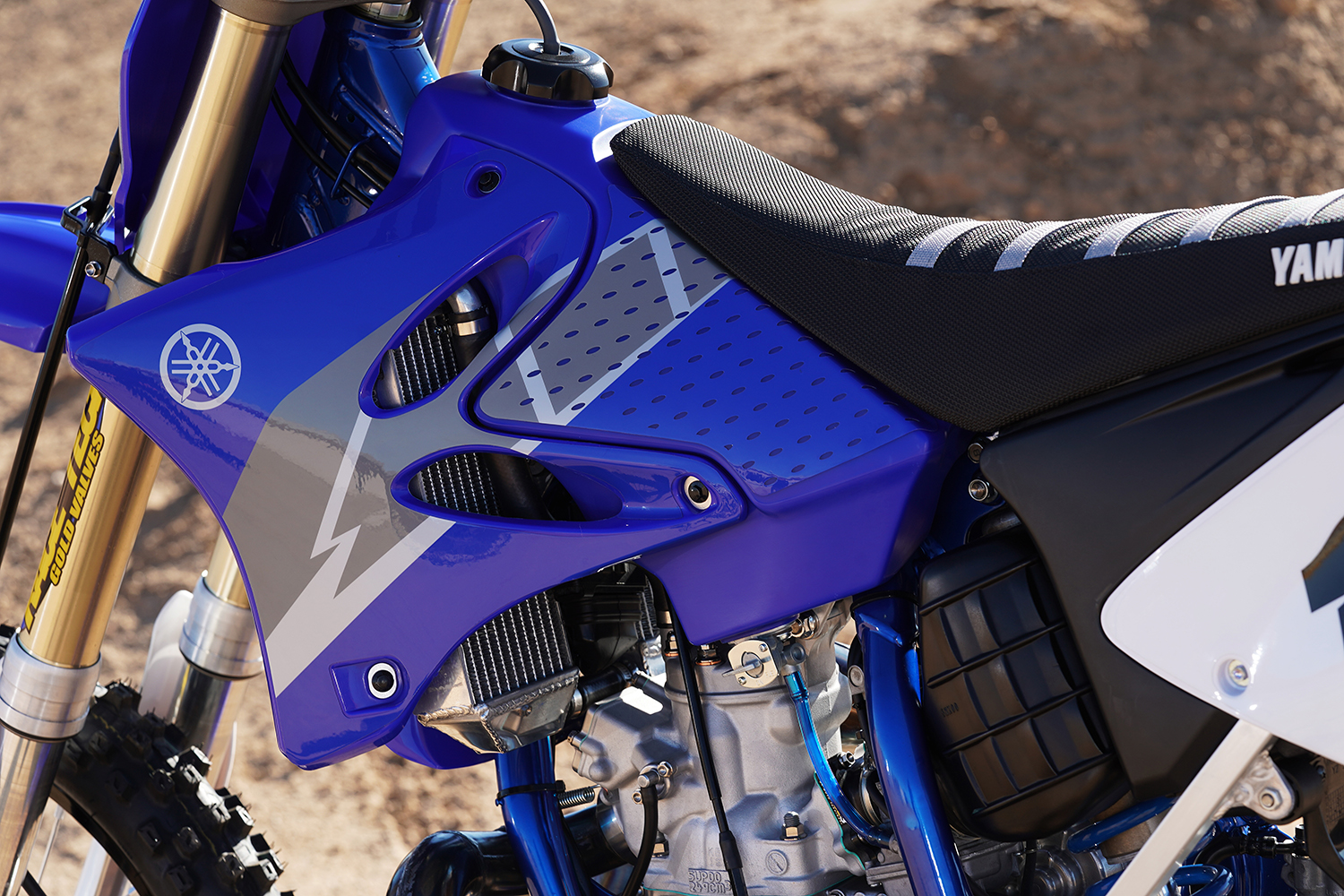 I started by getting the frame powder coated candy blue and the swingarm grey. The motor was completely rebuilt back to stock with all OEM parts, plus a Vortex piston. It has Moto Tassinarri V-Force Reeds and the original stock carburetor. I bought the bike with a plastic restyle kit upgraded to look like the modern bike, but I went back to the original plastics. The rear fender and air box area is my favorite part of this bike. 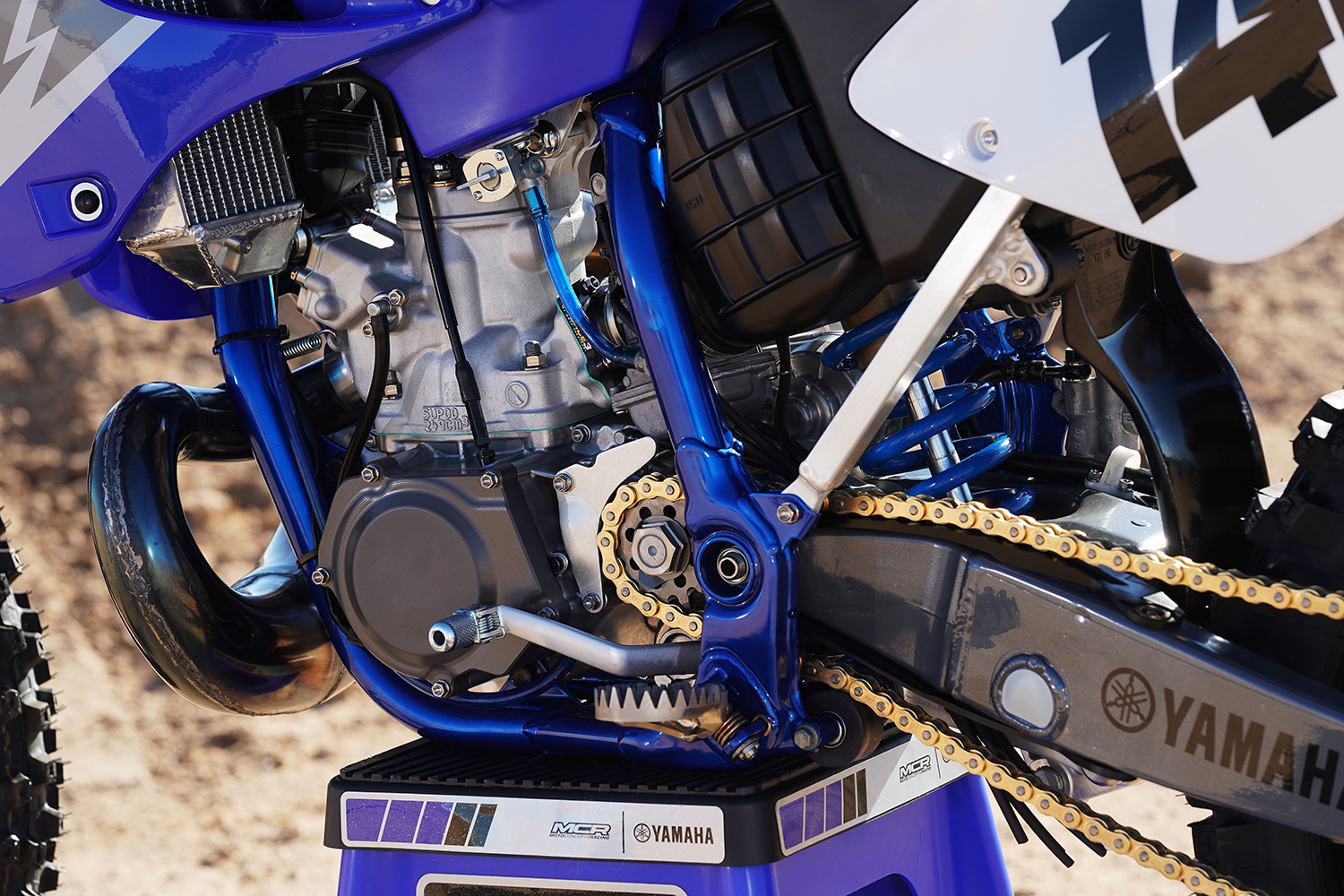 The chassis has all titanium hardware excluding the motor mounts and pivot bolts, as those would make the chassis too rigid. The fork and shock are the original OEM components, and both have been rebuilt and revalved by Race Tech. The triple clamps are off of an older Yamaha YZF four-stroke. The clamps that came on these bikes originally aren’t too pretty and are machined to only fit 7/8″ handlebars. I am a fan of the oversized 1 1/8″ Renthal Fatbar and I also wanted separate bar mounts. 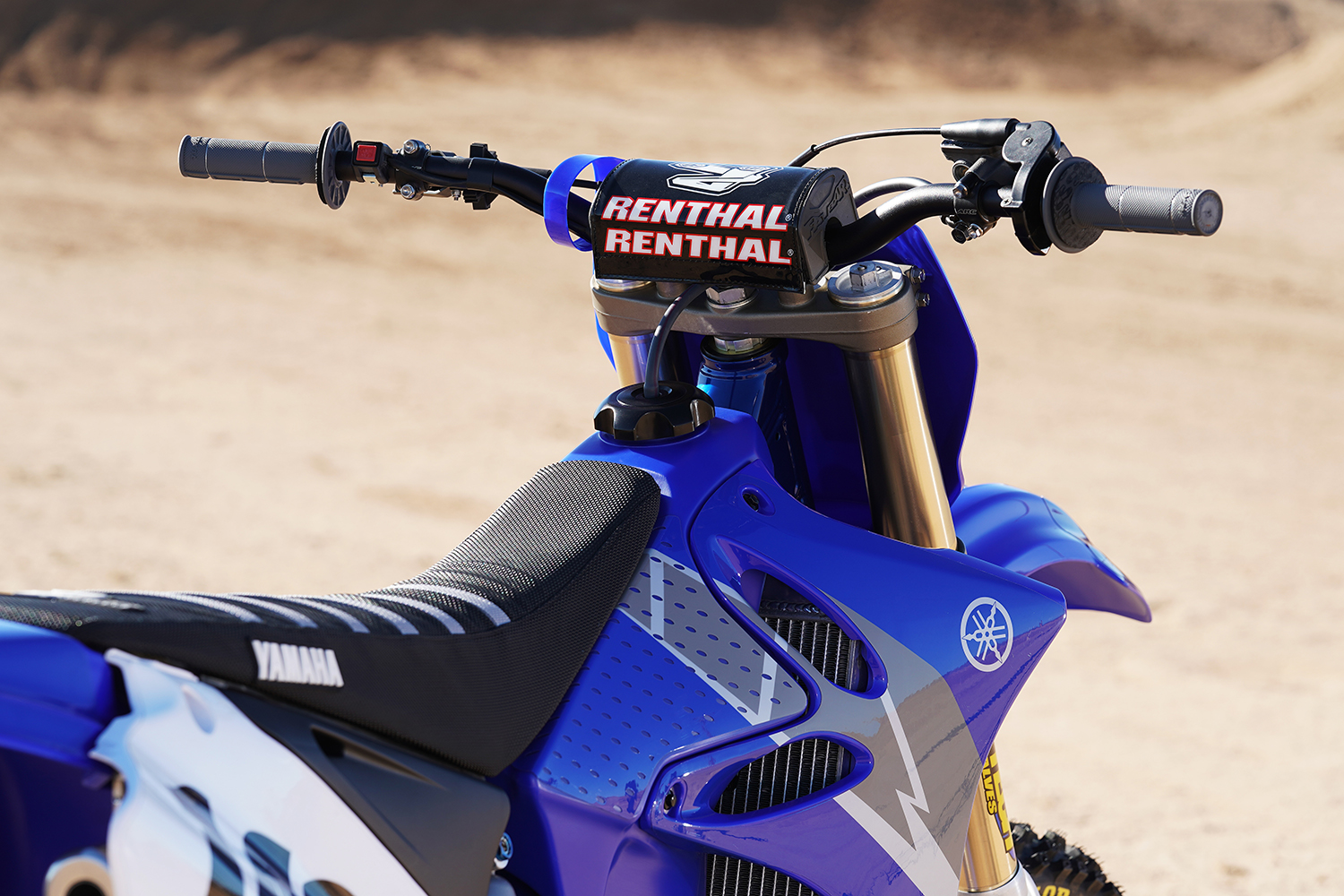 The front brake system is a complete Honda setup, from the master cylinder to caliper, with Light Speed fork guards to accept the modern front brake line routing. I had to go with the FMF Shorty Silencer and Fatty Pipe because those go with two-stroked like peanut butter goes with jelly. A lot of detail wet into this bike and it is really cool to have a 17-year-old bike in showroom condition!”