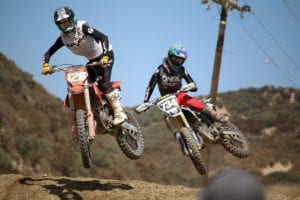 And that’s a wrap! The 2019 AMSOIL Swapmoto Terra Firma race series has officially come to an end, as we ventured back out to legendary Glen Helen Raceway for the final round of the tour. With some of the highest temperatures the series has faced predicted, we were quite shocked to see so many racers filter through the San Bernardino facilities gates excited for a day of racing. The track crew shaped up two fast-pace courses ready for racers of every skill-level to shred. As always, Glen Helen Raceway and the Swapmoto Race Series staff delivered an excellent day at the track for spectators and racers.

Swapmoto Race Series regular Jeff Loop came out to the final round of the AMSOIL Terra Firma series to log in another day of racing. With a stacked field in both the 30+ Pro and Pro Open (125-450) classes, series veteran Jeff seemed to have his work cut out for him. However, Loop was able to hold off our buddy Kris Keefer in all four of his motos and snag two overall class wins. With four moto wins, we think it’s easy to say Jeff Loop wasn’t fazed by the extreme heat.  The Open 85-150F/Supermini class has held some of the most intense motos and battles we’ve seen throughout the entirety of the 2019 AMSOIL Terra Firma series, and the same held true at the series finale. Youngster Enzo Temmerman has established quite the name for himself on little bikes, as he’s earned a spot on the elite Orange Brigade team and has even been featured in the movie Premix Two. The kid out of Visalia, CA made an appearance at the series finale and made his presence known, as he held off nearly twenty other competitors in the second Moto of Open Supermini to snag the win and take home the overall class victory. Along with that overall, Enzo dominated the Big Wheel Open 85/150F class with a 1-1 performance and grabbed a fourth moto win in the 8-11 years 85/150F class. Solid day of racing, Enzo!

We know you’re just as sad as we are to see yet another Swapmoto race series wind to an end, however, just as the Terra Firma series ends we are set to kick off the 2019 Fall Classic series in just a few short weeks. We hope to see you all and more back out at Glen Helen Raceway on September 29th for the Fall Classic series opener!