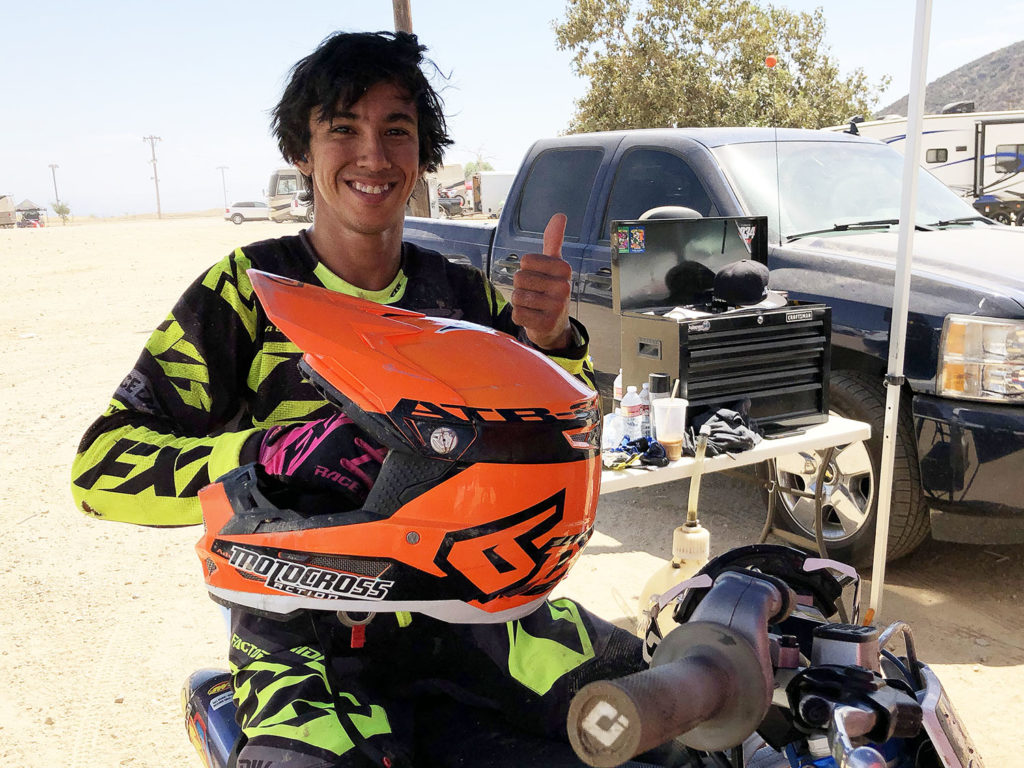 Brian Medeiros is one of the coolest guys you’ll ever meet, and it’s always a treat when he shows up at one of the AMSOIL Swapmoto Race Series events. Originally from Hawaii, Medeiros moved to the mainland to pursue his motocross dreams and it’s awesome to see him realizing many of them. Brian was on hand at the Terra Firma Series finale and we took a few minutes to hear his motocross story. Enjoy!

We’ve seen quite a few Hawaiian racers relocate to SoCal through the years because there is more racing going on. What is motocross like in Hawaii?

The island I grew up on – Kauai – we only have one track and it is only open on the weekends. So I rode the same track from when I was five years old until I was about 18 and I had it pretty mastered by that time. (Laughs) Coming here was a big culture shock for me. The speed limit in Hawaii is 50 mph and when I was here I was like, “Woah! Slow down! Why are we going to fast.” (Laughs) I just want to show the up and coming kids from Hawaii who don’t have much like I did, that you can make it in motocross even if your parents aren’t loaded. You just have to work hard, be respectful, and meet good people.

I heard that you go back and forth from SoCal to Hawaii because your mom works for the airlines?

No that’s my cousin Kai Mukai.

Oh! That’s right. So, Kai came here and made a big splash in SoCal. Did you kind of follow in his footsteps?

Yeah he came over when he was on 60s and 80s. I wanted to come over too but my parents wanted me to finish high school first. It’s funny…I haven’t told this story really before. I was sitting at the table with my parents, about to sign my college applications, and I asked my parents if they would mind if I gave motocross a shot for one year. They said, sure and that they would support me as much as they could, but I would have to figure it out on my own. So I shipped my bike over and flew to Northern California with $500 in my pocket and made it work. That was in 2013. 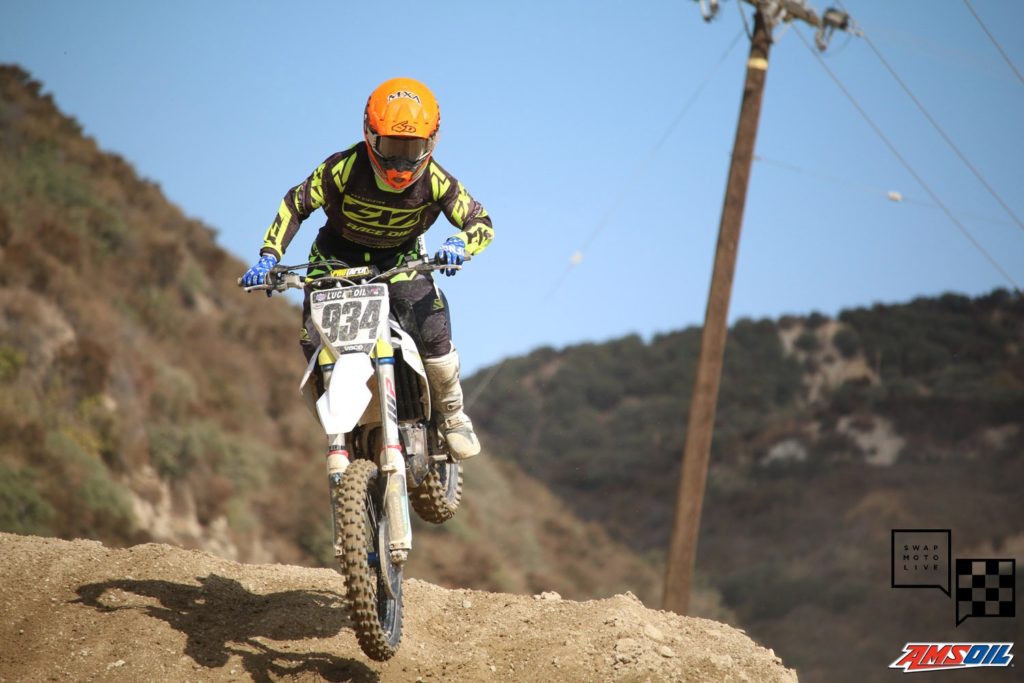 What was your breakthrough, then, when you moved to California?

I lived in Northern California with my friend whose name is also Brian and I had to learn the speed here. I didn’t even know what Loretta’s was. I didn’t know that SoCal was the place to be. He introduced me to Dennis Stapleton and I moved to SoCal and lived with Dennis for four years. Just this year my fiancee and I got our own place and I am starting to branch out on my own finally.

When you moved to California from Hawaii were you a B-class rider?

No, I was C-class. I didn’t make it to Loretta’s in the C class. I think just being in California and being around all the fast people taught me a lot. No matter what age, everyone goes fast here. I just never gave up. There were times when I had to take nine months off because I got injured. I had both of my knees rebuilt. I wondered if I still wanted to do this so I went back home to Hawaii for about nine months to recover and I got my drive and desire back. I worked a construction job and saved up a bunch of money and when I came back I bought another bike and a truck. My first Pro National was Washougal 2017.

So how did you get hooked up with the Motocross Action Wrecking Crew?

Just form living with Dennis. He is one of the main test rider for MXA. They get a lot of flack sometimes, but they have been very good to me. When I first moved to SoCal with Dennis, my bike blew up and I couldn’t race. But Jody (Weisel) told me, “Just bring your gear out to Glen Helen and you can ride one of our bikes.” That was the first time in my whole life I had ever ridden a current bike because all of the bikes I owned were two or three years old. It was a cool experience. I just learned as much as I could by listening to the people around me, listening to podcasts, and all of that. I learned how to test and what different adjustments do to the bike. I learned the importance of setting up my own bike for myself. I had never had suspension done before I moved here. And now I am a test rider and I can express what I am feeling on the bike. It’s been a wild journey for sure, and I am looking forward to seeing where the rest of it goes! 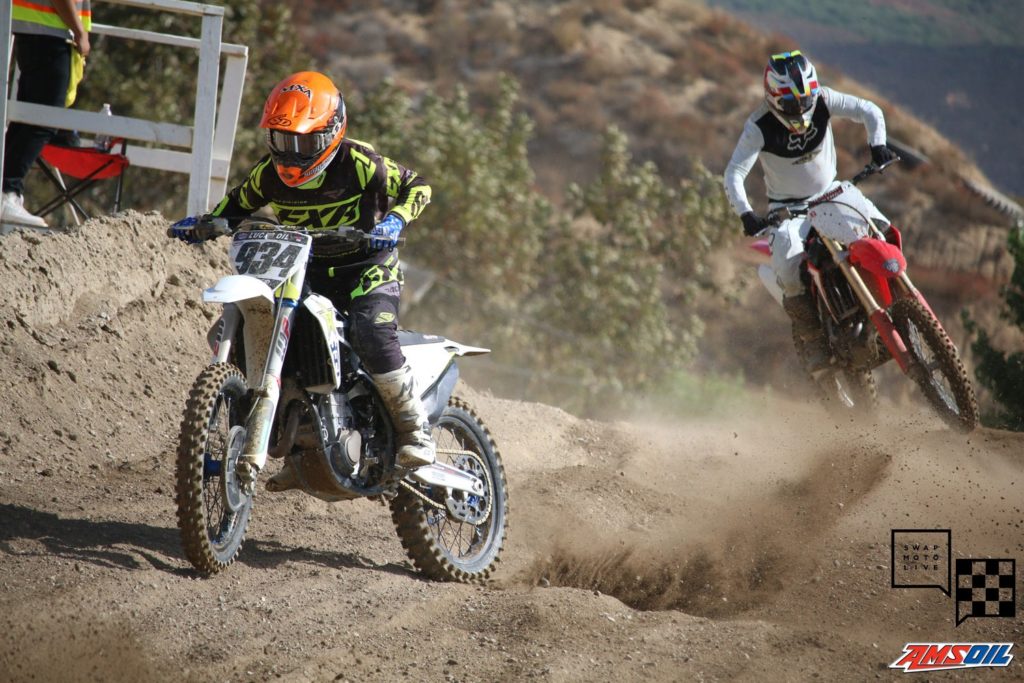 Being associated with MXA has allowed you to do a lot of cool stuff. You and I were just at the KTM off-road launch in Washington with some other test riders a few weeks ago…

Yeah if you had told me a few years ago that I would be able to travel around the United States and get to test new bikes and see these new places and amazing things, I would have laughed. I am just enjoying it. I am grateful for the opportunities that I have had and if I can inspire just one kid from Hawaii to give it a go as I have, then I consider myself a success.

So do you survive off weekend race winnings, or do you have a weekday job?

I work a full-time job, Monday through Friday at Wrench 42 Motorsports with Anthony DiBasilio. He was Kurt Caselli’s mechanic and he worked for KTM for many years before opening his own shop. He told me that he’d give me a job if I wanted to work so I jumped on that opportunity. It’s cool. I have learned so much about working on dirt bikes and how they are built. I had no idea what a race prep was. (Laughs) What do you mean you have to grease the shock linkage? (Laughs) Now I build Stapo’s bikes and some of the project bikes he’s in charge of. It’s a lot of work but it is enjoyable and I learn something each and every day so I cannot complain!

I’m just loving it. I love coming to the Swapmoto Race Series and meeting people. You can never have too many friends. Stay humble and respectful and always try hard.

We know a few people were trying to figure out how

The final round of the West Coast Open is this Sun

Next series dates for @swapmotoraceseries so save

Check out some video from yesterday’s racing! J

This weekend is round 4 of the West Coast Open @gl

Results are live at www.swapmotoraceseries.com! T

This weekend the series heads over to @lacrmx ! I

Pumped to say Mini Major is on the calendar this y