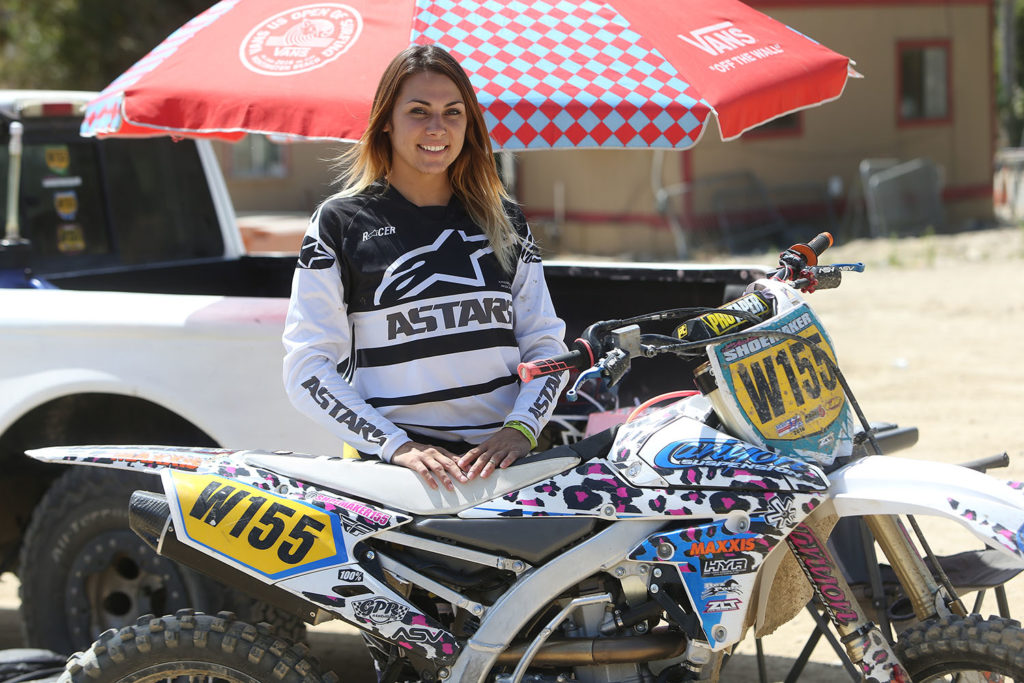 We’ve been enjoying a healthy turnout of female racers at the AMSOIL Swapmoto Race Series recently, and Shonie Shoemaker is one of our regulars who runs at the front of the pack. A self-proclaimed off-road racer who concentrates on the AMA Big 6 Series, Shoemaker uses motocross races like ours to cross-train and help her in her quest to become the AMA D-37 Women’s Intermediate Champion. We caught up with Shonie at the Terra Firma Series finale at Glen Helen Raceway.

Judging by the number on your bike, we assume you race off-road?

National Grand Prix Series, Big 6. Last year, I got with my mechanic and told him I really wanted to be competitive with racing, so he helped me work on my bike and get it all ready. It was all new to me. I just went out there and did my best and my results weren’t that good at first, but by the end of the year, I was finishing around third. I only rode trails with my family and we never raced before last year.

Last may I got this bike my 2017 Yamaha YZ450F, and it helped me push harder this season. Right now, I am currently the Women’s Intermediate class points leader in the Big 6 Series. 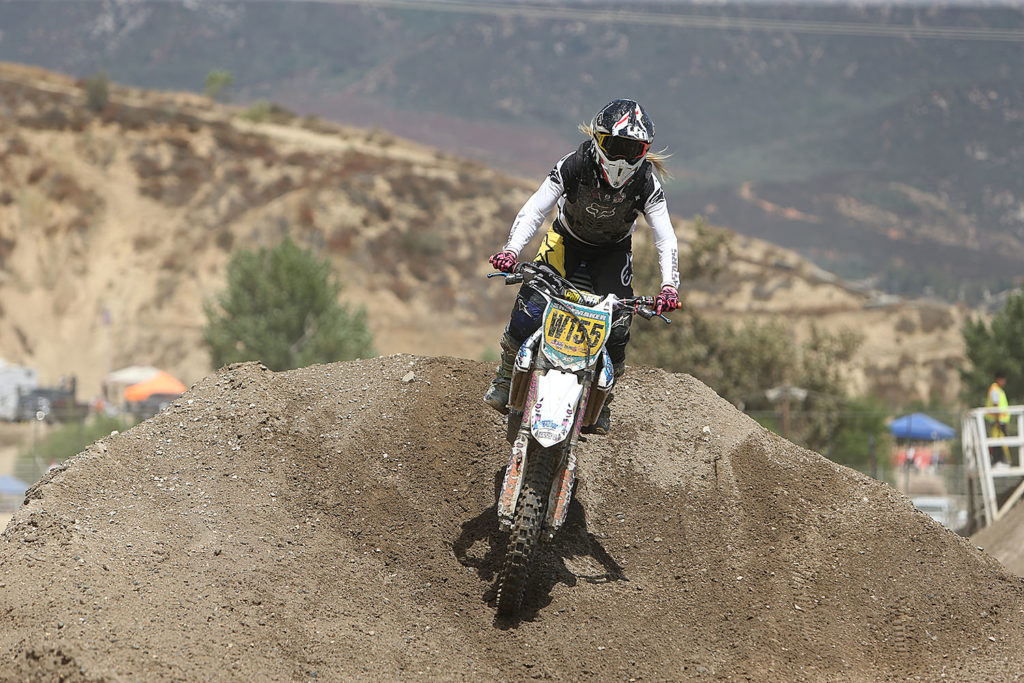 How did you become involved in motorcycles in the first place?

My step-dad taught me how to ride when I was five years old. I just rode with him and his friends out in the desert. We went as often as we could.

Why motorcycles instead of something else?

I played basketball and volleyball in high school and I was varsity in both. I got offers to play in college but they were only partial scholarships, nothing full. I loved those sports but I didn’t see myself making a career out of either of them, so I decided to go to community college for two years instead. But then I got really into riding and racing and stopped going to college, and I decided that I wanted to work parttime and race parttime. It’s been working out for me so far!

We’ve seen you at a few of our races. Is this good cross-training for you, since motocross is much more intense than a Grand Prix?

I definitely use this as training because it is no joke! Pushing as hard as you can for six laps is far harder than riding a GP for 45 minutes. It’s a different kind of push. In a 45-minute GP, you have all this time to formulate your strategy and complete your strategy. Here, you can not hesitate for even one second, because one second could cost you the lead. 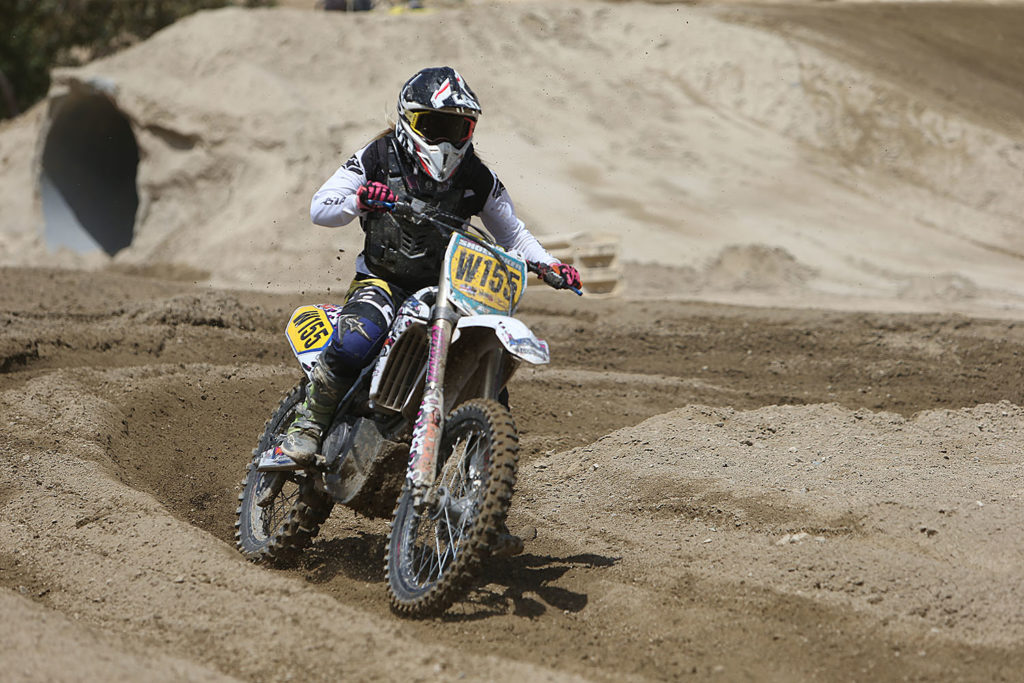 It just so happened to come up for a super-good price. I had just sold my 2006 Kawasaki KX250F and I just did not like it. My friend was selling this for a deal and it only had 20 hours on it. I got a killer deal. I go where the deal is and this is what I got.

Was it hard to adapt to? Bigger, heavier…more engine braking?

No, I actually have so much fun on it. It has a different kind of power and you can be lazy on it because it has so much torque. It can get you out of trouble.

I saw you raced a Kawasaki KX500 at the Two-Stroke World Championships! How was that?

It was so fun I had a blast! It was almost comparable to this Yamaha as far as the power, but it hit way harder. It’s ready for me whenever I am ready for it. 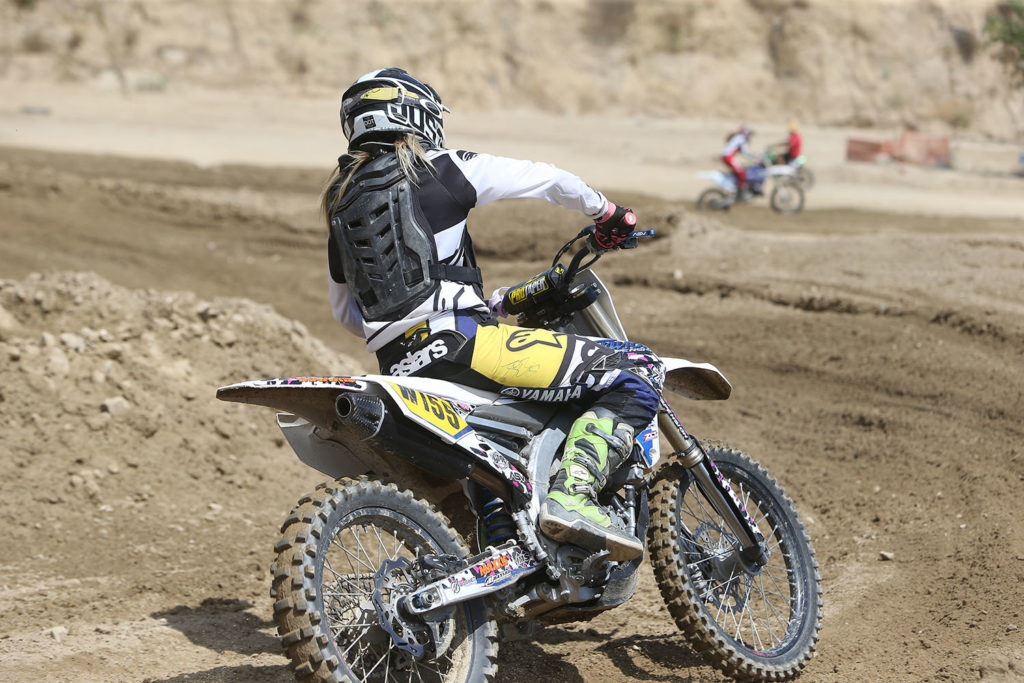 Yeah when I first started racing it I had pro suspension because I was over jumping a lot of the jumps because this thing just has so much power. And I needed a different set for Big 6 because of the desert riding. I have actually been using that full time. It’s going pretty good so far.

Taylor Heiman and 362 Media started a race team with me, Gina Alvarez, Jaymie Hajewski, and Brooke Whipple. We all do different race series, but we all have the same goal. We want to help inspire women to race and help grow our industry. There’s an opportunity out there but it’s hard when you are a woman. You want a different kind of help. And when it’s women helping women, it’s better. It shows camaraderie. If we can get a full gate of women, that would be awesome. That’s what we all want! What’s the point of racing three other girls? I love it when the fastest girls show up. I know I am not going to beat them, but it awesome to see what I could become. If there are four of us always racing each other we will never get any faster because that’s all we know. I was racing in the 450 C class for a while because I wanted better competition and to push myself.

We would love to grow our women’s classes. How do we do so?

Just make it more known. And the ladies need to be nicer to each other.

It seems like there are more girls riding nowadays than ever. Why don’t they race?

I think their jobs may not allow them. I used to have a hard time. But now I have a great group of friends who will help me load my bike if I need help and support me in the races. If you’re a girl and you don’t have anyone to help, go to the races and make friends! Don’t be stuck in your little shell! 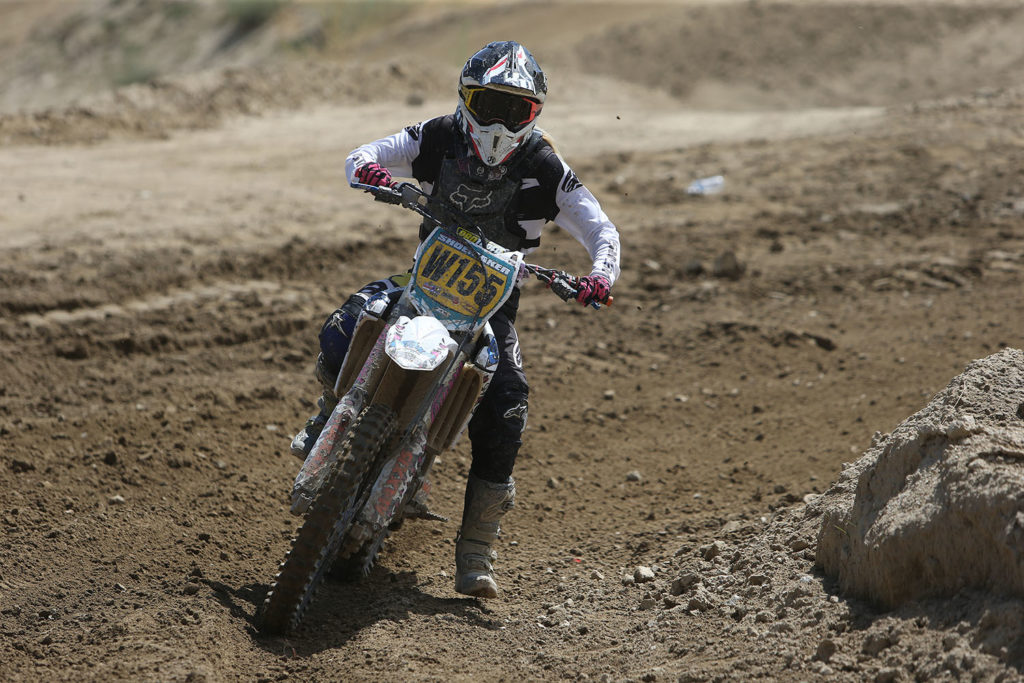 Speaking fo work, what do you do to earn a living?

I do telecommunications. I am a tower technician which is a tower hand. We do all of the decom and upgrades on cell phone towers. We work outside five days a week, whether it’s raining or blistering hot.

We know a few people were trying to figure out how

The final round of the West Coast Open is this Sun

Next series dates for @swapmotoraceseries so save

Check out some video from yesterday’s racing! J

This weekend is round 4 of the West Coast Open @gl

Results are live at www.swapmotoraceseries.com! T

This weekend the series heads over to @lacrmx ! I

Pumped to say Mini Major is on the calendar this y