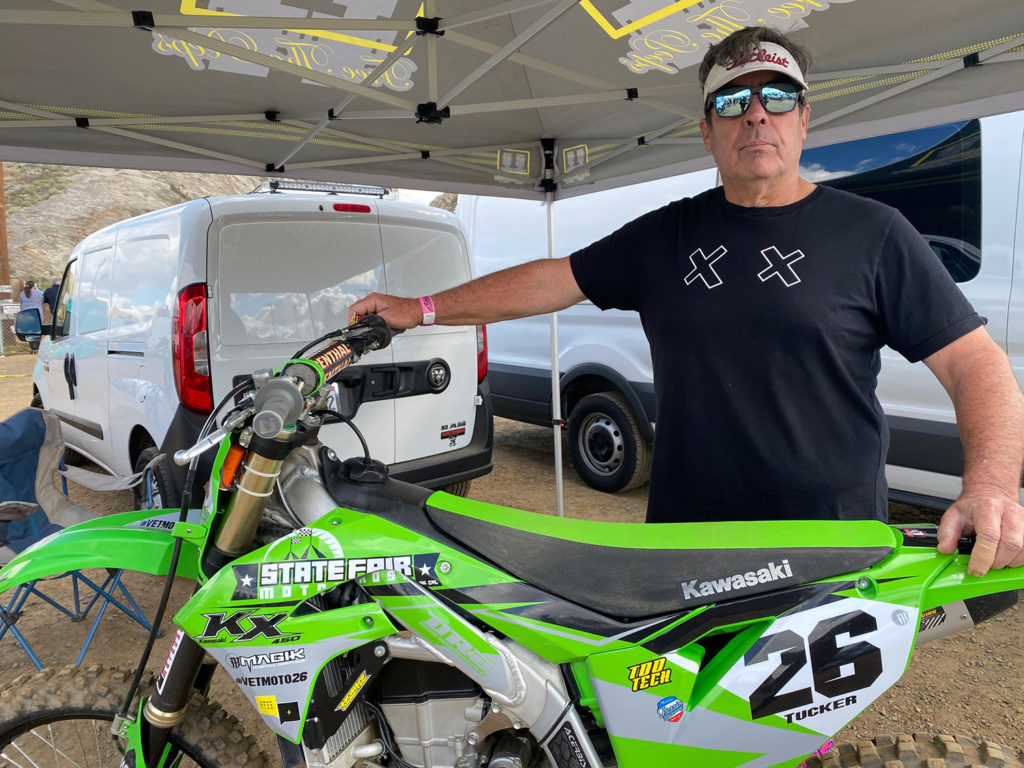 Tim Tucker might love motorcycles more than anyone else we know. The young 55-year-old is at our local track every time we go and then some, and always with a big smile on his face. Its been a few years since we’ve seen him at the races, but we managed to talk him into some gate drops at the final round of the El Dorado winter series since it was at his favorite race track.

So Tim Tucker, you are returned to the races after a couple of years away. I think the last time I saw you race, was when you won some classics at the TransAm Vet Classic…

That could be right. Yeah, that was back at Milestone, last time I raced.

Why the time away from the starting gate?

Okay. So, you used to be a Milestone local and now State Fair is like your home away from home. You’re here almost every day, right? How many days a week are you out here riding?

Monday, Tuesday, Wednesday, Thursday, and maybe Perris on Friday. But since it’s pro day on Monday, we lay down and we don’t come out until that’s over.

I’m a utility locator. I find underground cables. So that’s… I’ve been doing the same thing for so many years, I know where all of it is. So I don’t really have to put much into it. I get the tickets at night, I see them, and if I have to go, I go out two or three times a week, it’s all I do. And then mark the ground and go home.

So do you usually go do some sort of work after you ride?

Yeah. Or, early in the morning before I ride. I’ll leave at 4:00 AM, go down to Irvine do my marks, and then shoot to the track from there,

Most people would think that you get tired of dirt bikes riding five days a week. What keeps you so passionate about it, and riding so often?

I just love dirt bikes, period. Just everything about them, and all my friends, it’s like another family. I’m going from one home to another. So I love hanging out with them, and I’ve never stopped loving dirt bikes since I was a little kid. And here it is today, 55 years old, still going. 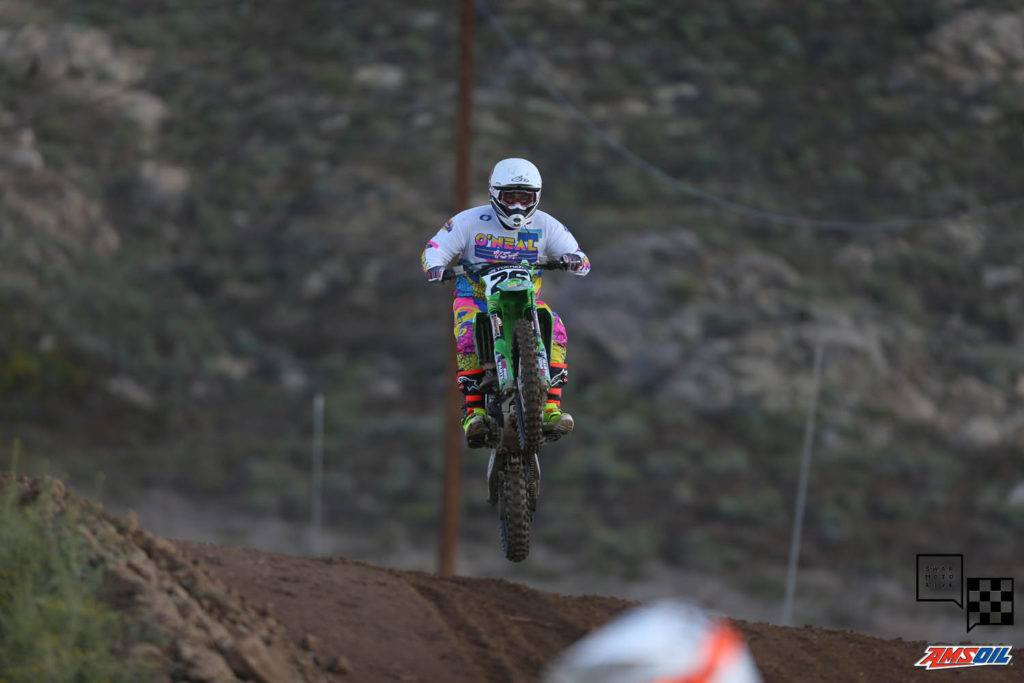 Okay. So the transition from Milestone to State Fair, it seems you’re loving this place just as much?

I love jumpy, poppy, real steep jump faces, all the stuff that most people don’t care for, that’s where you’ll find me. I love that. I don’t know why. It wasn’t me when I was really younger, but as I got older, the tracks became that way, and I just love it. Milestone showed us the way to these big faces. We were always like, whoa, and then just start doing it. And you’d get a little swag going, it’s fun. I love doing that.

So who’s this group of friends? Who’s in your posse that you ride with every day?

Whew! Well, you yourself, of course. Dommer, Scrub Daddy, Crazy Jimbo, Brad Osborne. Oh God, the list is too big for me to remember right here. It was a good 15 guys.

Actually, I do have good opinions on that. I listen to my heart. If for some reason something bothers me, I’ll stop. Or, if I have a weird feeling, I won’t do it. And I always ride within my capability. I’m not going to go out there and do anything that puts me in that harm’s way. Maintenance on the bike, good back tires, front tire, keep it hooking up. That takes a percentage out of that, right. If your bikes in good shape, that takes a percentage of that risk out, and then just listening to yourself. You don’t feel good that day or something, just go on home, it’s okay. You can ride tomorrow. So I’ve taken that on, and that seems to be the secret.

Okay. So, you made the switch to the Kawasaki KX450, what have you done to this to make it suit you?

Just put some stiffer springs on it to hold my weight, and handlebars and stickers. I don’t go to town on it. And my Dubach Exhaust, Doug’s always got my back on that, because I’m always with the DRD.

And how often do you get a new bike?. How many hours are on this bike? 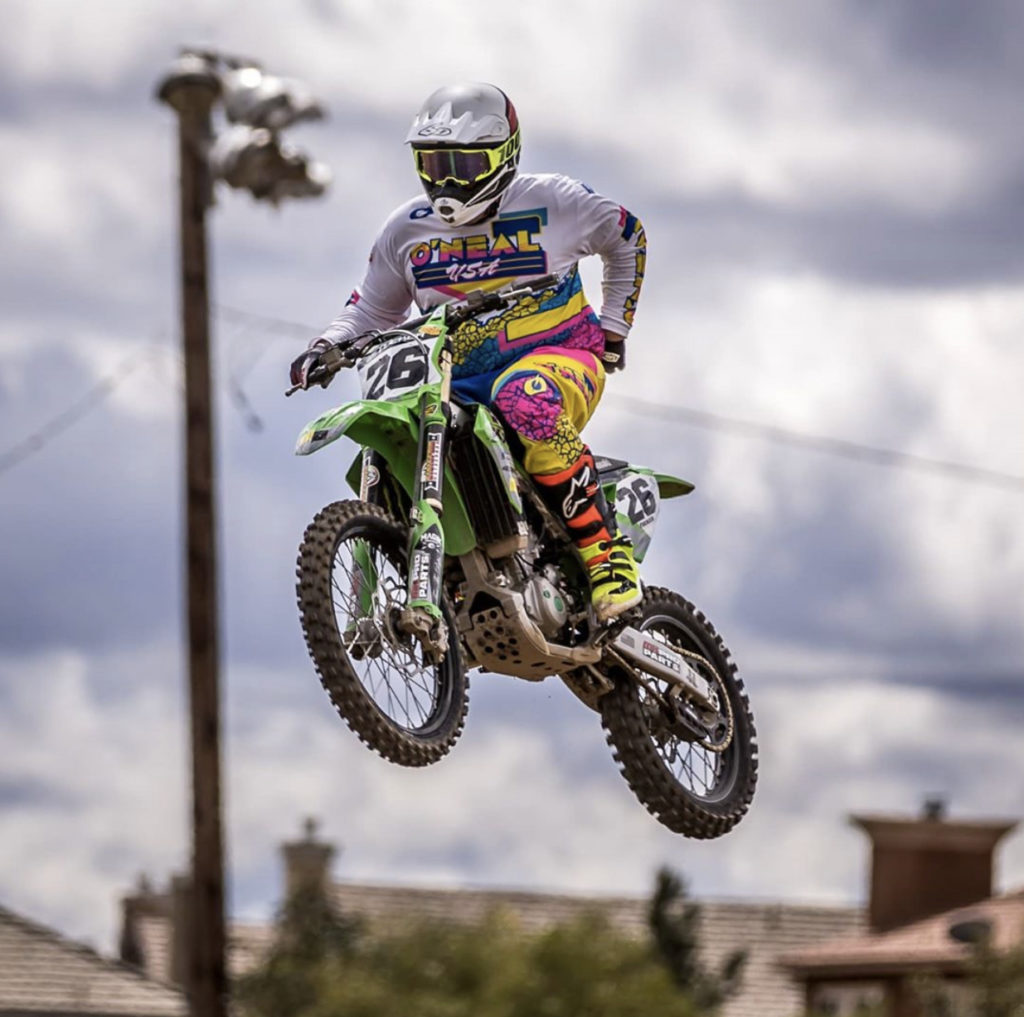 About a hundred hours on this bike. So what is your replacement cycle schedule?

The soonest is a year, and I won’t go past a year and a half. Just because I beat them up so bad. Wouldn’t want to break one in half or something.

And that’s happened with you before, right?

That’s happened. Yeah. That has definitely happened, and it sucks.

Collarbone at Perris. at the Jaasac Sloan ride day.

That was three years ago, right?

Yeah. So you’re pretty good at staying off the ground?

Well, the Suzuki hit the ground once. The Kawi has not yet.

Okay, let’s keep it that way.

Let’s keep it that way. Absolutely.

It’s a weekend off racing so hit the tracks and

@swapmoto caught up with the entire Grant family a

We are excited to report that track is looking gre