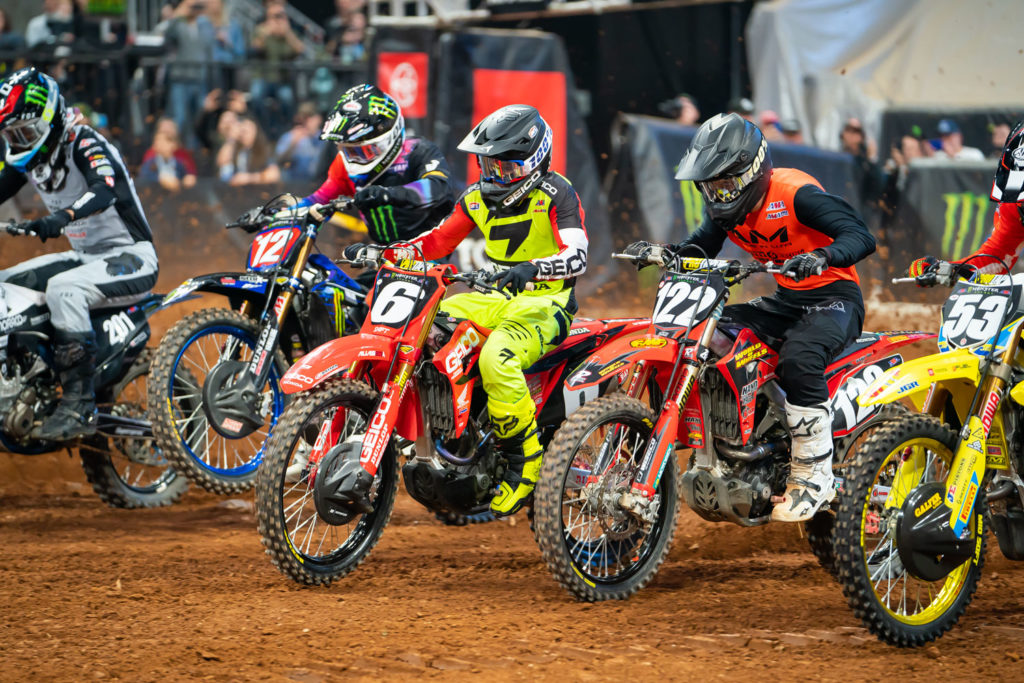 Preface: This is in no way an attempt to politicize, drum up fear, or cause concern. It is only a post that states the latest information that we have in regard to the ongoing COVID-19 situation and how it will pertain to the 2020 Monster Energy Supercross Series, Monster Energy FIM Motocross World Championship, Lucas Oil Pro Motocross Championship, and other race series. What is posted below is from press releases, on our conversations with event organizers and race teams, and statements from government officials in affected areas. Regardless of your opinion on the situation as a whole, actions by governments will have a direct impact on the immediate future of motocross.

Over the last few weeks, we’ve watched how Asia and Europe have reacted to the spread of COVID-19/Coronavirus and waited for the same to occur in the United States. A matter of “when” and not “if,” nearly every major racing series and professional sports organization have been forced to address what they will do to minimize the spread through limited fan interactions, competitions in empty stadiums, or postponed and canceled events.

What has already happened in professional motocross racing? Here is a quick recap in chronological order of occurrence…

Ken Roczen announced that he will skip all planned public appearances and autograph signings for the foreseeable future, which he started at the Daytona Supercross. Roczen stated it is a precautionary measure after his recent immune system issues that came as a result of serious injuries/infections, multiple surgeries, and an adverse reaction to last year’s lime incident in San Diego.

Nation-wide restrictions and a newly announced quarantine in Italy has forced InFront Moto Racing to postpone the 2020 MXGP of Trentino-Italy round of the 2020 Monster Energy FIM Motocross. The new tentative date is July 18-19, barring any further issue.

Similar, but less stringent, measures have been put in place in Argentina after the first cases and death from the virus were reported in South America. The 2020 MXGP of Argentina, which was to be the next race in the series, has been postponed. It will now be the final race of the MXGP series and will take place on November 21-22.

The recent increase in Washington (including a positive result from an employee of CenturyLink Field) resulted in a restriction on all public events with an attendance of 250 people or more by the state government, which forced the cancellation of the 2020 Seattle Supercross. Although an XFL game will take place this weekend at the venue, there will be no crowd allowed. Feld Entertainment has said they are currently working on a replacement venue and date to fulfill the thirteenth round of 2020 Monster Energy Supercross Series schedule but did not share any place or date. Fans with tickets to the event can contact Ticketmaster or their point of purchase for a refund.

A restriction on public events of more than 250 people by the state of Indiana has forced the cancellation of the 2020 Indianapolis Supercross. Fans with tickets to the event can contact Ticketmaster or their point of purchase for a refund.

Similar bans on stadium crowds swiftly followed and by Friday morning, it was confirmed that the 2020 Detroit Supercross, 2020 Denver Supercross, and 2020 Foxborough Supercross would be canceled, with ticket holders about to get refunds at their point of purchase and Ticketmaster. There were plans for a phone call to occur between Feld Entertainment and the teams on Monday, which would address the situation after the weekend. We had heard that there were plans to hold multiple races in Las Vegas at some point in the next few weeks, an attempt to fulfill some sort of schedule that was a possibility due to a lack of limits on crowds in Nevada at that time.

Pierer Mobility Group, the parent company to KTM/Husqvarna/GasGas, announced that all motorcycle production at the Austria facility will be put on pause for two weeks, a precautionary measure due to an interruption in the supply chain for necessary components with vendors in northern Italy. The break will take place between March 30 to April 10 and is being classified as a “vacation” in the company’s statement.

Local authorities in Florida put a stop to the Red Bull Day In The Dirt Down South, a weekend-long race that was set to take place at Dade City MX.

The Center For Disease Control announced on Sunday that it encourages a limit on public events of 50 people or more, which would effectively end any chance of an organized race taking place at any stadium venue in the United States. Around the same time, major casino groups in Las Vegas announced the shutdown of their properties effective this week, which extinguished any hope of multiple races in the city. By Monday afternoon, the President announced that the government and CDC consider it unwise to have groups of 10 people or more.

InFront Moto Group announced more changes to the 2020 Monster Energy FIM Motocross World Championship calendar on Monday, which included moving the 2020 MXGP of France at St. Jean d’Angely to June 27-28, the 2020 MXGP of Indonesia at Jakarta to October 31 – November 1, and the MXGP of Asia to November 7-8 at a venue that will be announced sometime in the future. The constant shuffle of the schedule, particularly the shift of events to much later in the year, raises some concerns around the Motocross of Nations taking place in Ernee, France in late September.

Yamaha announced they would suspend production at the Motori Minarelli engine factory in Calderara di Reno, Italy, and the MBK Industrie assembly plant in Saint-Quentin, France, effective immediately and through March 22. After that, the situation will be reviewed on a weekly basis. The release also stated, “Yamaha Motor Europe is working following authorities’ directives in Italy and France to ensure that employees at both facilities are not disadvantaged financially as a result of the temporary closures.”

MX Sports announced that eight upcoming Area Qualifiers for the 2020 AMA Amateur National Motocross Championship have been postponed until at least the end of March. The group also released a statement regarding the 2020 Lucas Oil Pro Motocross Championship that said they will monitor the situation with information from authorities and health organizations but did not indicate a change to the 12-race schedule.

The 2020 Steele Creeke GNCC scheduled for April 4-5, the fourth round of the Grand National Cross-Country Series, would be canceled. The series intends to resume competition with the 2020 Camp Coker Bullet GNCC on April 18-19.

InFront Moto Group announced more changes to the 2020 Monster Energy FIM Motocross World Championship calendar. The 2020 MXGP of Italy at Maggiora will now take place on July 4-5, weeks after its original slot in mid-May. The 2020 MXGP of Germany at Teutschenthal will now take place on August 8-9, more than two months after its original date in mid-May.

The Dirt Diggers North Motorcycle Club, the event organizers at Prairie City OHV Park in Northern California, announced the complete cancellation of the 2020 Hangtown Motocross, the first round of the 2020 Lucas Oil Pro Motocross Championship which was set to run on May 16. The group stated that there would be no replacement date, but that they will be ready to host the event in 2021.

KNMV (Royal Dutch Motorcyclists Association) announced the complete cancellation of the 2020 Dutch Masters Motocross Championship, the country’s national series that is often raced by MXGP riders on off-weekends. The KNMV stated that this decision is due to the ongoing health situation in Europe and the constantly changing MXGP calendar, which has made it difficult to plan race dates.

Feld Entertainment announced the cancellation to the final two dates of the 2020 Monster Energy Supercross Series (Salt Lake City and Las Vegas) but stated that the series is not complete and that they intend to make up the remaining seven rounds later in the year, between mid-September to late October. The exact dates and venues of those rounds are still undetermined.

MX Sports announced the necessary postponement to the Area Qualifiers for the 2020 AMA Amateur National Motocross and GNCC rounds that were intended to run in April.

Jetwerx, event organizers to the Rockstar Energy Triple Crown Series in Canada, announced the postponement to the four-round Arenacross championship that was intended to run in April and May. The current plan is to start the nine-round National Motocross championship from June to August, hold three Arenacross races in September (it appears Calgary will not be a double-header), and concluded the year with two rounds of Supercross in October.