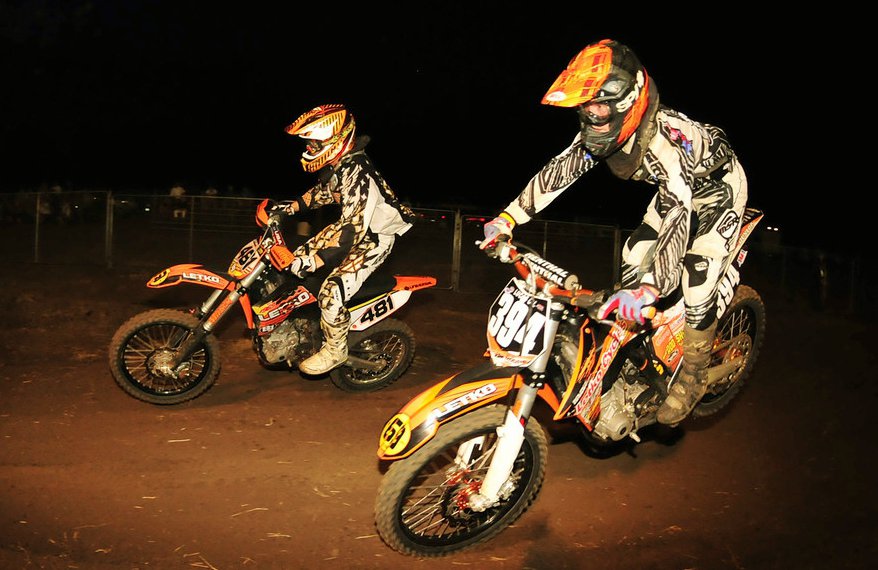 The year was 2011. Minnesota’s Ryan Dungey had finished third overall in Supercross, was closing the books on what would be a heavily contested summer-long battle of the Ryans with Villopoto, was finishing his final season on a Suzuki at the last round of the outdoors was just about to run at Pala/now Fox Raceway. Behind the scenes, the Pilot G2 pens were being clicked shut while the ink dried on his new contract for 2012.

I had planned some absolute world domination of my own aboard a KTM 250F that August. It started when I awoke in the middle of the night and devised a plan that would stack the deck against everyone else and align me with a grouping of brands no other rider could beat. With AMA Lites Arenacross Champion Tanner Moore as my teammate, the two of us would tour the nation in his Sprinter van contesting the 2011/2012 AMA Arenacross Championship.

At that time, Feld had just changed the format, which incentivized the use of the 250cc four-stroke and left the 450cc outside. The larger-bore bikes were far too much for the racing-in-a-bottle, horseshoe-shaped tracks that were built in B and C market cities through the winter months and had crowds filled to the brim and ready watch high octane racing on Friday and Saturday night. The series was an attractant to brands looking to get their footing in smaller markets, with a quality-controlled tour that often provided better racing than its bigger brother, Supercross.

At the fresh age of 22, I knew I could do some damage on the AX track with good equipment. But where would one start when they have with no money, no real track record of AMA based results, and not much of an industry footing so lean on?

On the computer. I started pounding out what I called a sponsorship deck. After digitally packaging it up into what was at that time a very professional looking PDF format, I started to put the feelers out to the industry.

With help from my then-sponsor/ KTM dealer, Letko, the digital deck was sent to every brand we knew, starting with the KTM regional sales rep. He bit like a starved shark and all of a sudden, it was coming into fruition. We were allotted four brand new 250 SX-Fs and a $5000 parts allowance. Motorex followed suit not long after and contributed $3000 worth of product while Tanner called his people at FMF and got comped exhausts on order. I can’t remember who the suspension shop was, but I do recall the offer of free parts and labor for our AX setup. Soon, FLY scheduled us for 10 sets of gear as Bike Graphix drew up a team kit and stickers got the stickers set to print.

It seemed like the first and hardest part of the equation was solving itself. I was between jobs and decided I would apply for unemployment. Again, at 22, it seemed like a perfectly fine means to an end of being able to afford the week to week expenses of being on the road. At this point, I was up to my eyeballs in contracts and was negotiating on behalf of myself and Tanner, who had taken a back seat to my lofty dream and decided I was the better half to score these deals. I was riding the gravy train the first week of September 2011 when my first unemployment check came in and some big news rolled our way in an email.

“Hello Jeff, my name is (whatever her name was, I can’t remember) and I am the marketing director for Choice Hotels. We have received your packet and would like to talk more about your team.”

Holy shit. One of the largest hotel chains in the country is trying to sponsor our team. What the hell am I doing? We don’t have bikes in hand, but parts are ordered and people think I’m someone I’m not because I kept referring to myself as “Team Manager.” At 22 and with minimal experience, I had embedded myself with a handful of brands that were ready to make the deal happen. We were going racing.

I watched the final round of the outdoors on Sunday night with my dad and saw how Ryan Villopoto won the series with a handful of points. But the bigger news happened off the track. Roger Decoster had left Suzuki for KTM the year prior, but that his protege was still aboard the yellow bike was a roadblock for the dream team that Austrian manufacturer wanted. And they wanted it bad. With promises made of a custom-made motorcycle, it was obvious that Team Pumpkin wanted to dominate the American realm of Moto.

“That’s so awesome. My old training partner and I are going to be racing orange in stadiums this winter,” I thought to myself when Dave, our liaison at the KTM shop, called one cold morning in late September with great news and said, “Jeff, the bikes are on the transporter headed to the dealership right now.” Yo! It was happening! I had a phone call set up with Choice later that week, which was going to be our time to talk needs and numbers.

The next morning, another call from Dave. I optimistically it was to say the bikes were there, but that seemed too fast and I assumed it was other business.

“Crutch…” he said. Something was wrong. “The rep just rang. They turned the transport truck around and it’s going back to Ohio.” It didn’t make sense what he was saying, as if he was speaking a Nordic language.

“What?” I stammered out.

“They signed Dungey, as you know, but the signing bonus was gigantic and a last-minute demand,” he said before a heavy pause. “So KTM is going to sell your bikes. I’m sorry.”

Instantly, my throat went dry. I couldn’t swallow. Of course, this happened. Further back, in 2003, I was supposed to be on KTM USA’s new development program for 2004, selected for my performances aboard orange and shop-level support. But then they blew their budget on some dude named Showtime. I could not believe this happened. Again. Once by my childhood hero and now a guy I grew up racing with practically my whole life. It felt like my friend stole the money in my pocket and my girlfriend in one suave move.

I then had to call all of the brands that had us allotted a budget and tell them the unfortunate news. All of them understood, wished me luck, and appreciated my drive. Ironically, I ended up racing in 2012 aboard a Suzuki and paid almost no attention to pro racing because I was still pissed at Ryan. Deflated and defeated, I just wanted to have fun dirt biking and that’s exactly what I did around the region.

Two nights ago, in what could be the weirdest coincidence in my life, I awoke with a drive to get on my computer and create. I put some water on the stove to make my morning Gimmick and thought about Anton and I’s numerous conversations about how we need to get out of our comfort zone. Like so many of my great ideas, this one surrounded me like water with concrete shoes on. I knew exactly what I needed to build.

After a couple of hours and an entire Chemex worth of coffee, I was ready to put that “If only” in the grave when I saved a PDF file with a new sponsorship deck (one that’s a thousand times better than the 2011 version) for myself and another rider to contest the Hoosier Tires AX National Championship.

As soon as the file saved, I popped on FB to check a message. As most of you know, FB enjoys reminding you of the past with “Memories” at the top of your feed. It was nine years to the day that I finished the 2012 AX series deck.