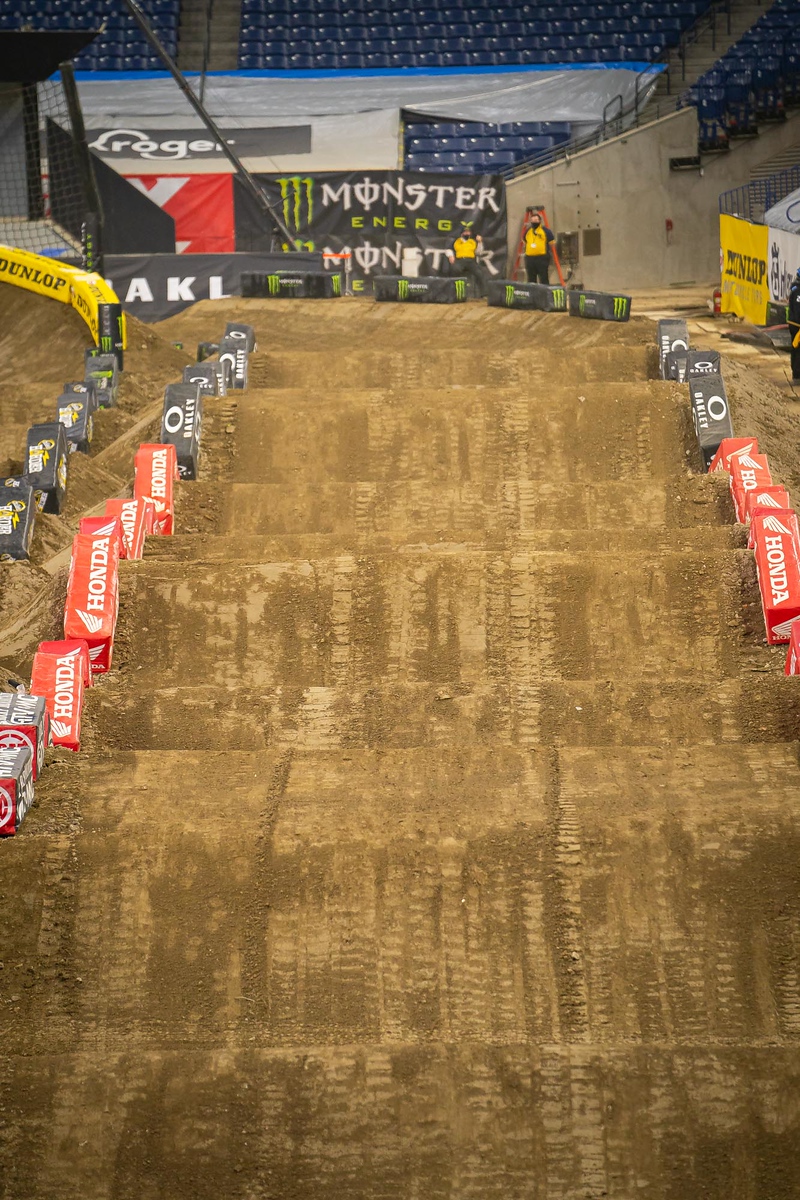 The tracks are too damn short!

I know I’m not the only one sitting in the comfort of my living room, leaned back against my padded chair back that can see the obvious fact. What the hell has been happening in the design studio at Dirt Wurx? Did they randomly decide that if we are going to have less fans at the races, we need to have less track? It sucks, because the tracks are so much smaller we see less of our favorite racers on the course. I paid top dollar on Peacock and we’re getting dollar store races. Truth is, with these 40 some odd second lap times, it’s a glorified arenacross series. Actually, the Kicker series had longer lap times at the Lazy E arena than the supercross races had that same night.

Because you’re reading this and may not know me, I’ll clue you in. Everything you’ve read so far in this article is sarcasm. You know that person that just irritates you to your core by performing nothing but constant pet peeves? Sometimes, it’s a good mental exercise to do those pet peeves to yourself. Be that guy. Take off the hero cape and put on the villain’s mask. Bathe in what you loathe. For me, one of my biggest pet peeves is watching people willingly put on the rainbow wig, the oversize shoes, the face paint, and obligatory big red nose.

The truth though, the literal hard fact is: the tracks are the same. They haven’t changed in how many years? A decade? So how is it possible that the (satirical) obvious explanation of the stadiums being the subject of a Rick Moranis movie series is not reality? Let’s hop back on the soap box for a second.

The bikes are too damn fast!

Hey, this might have some traction, although nowhere near the kind of traction Dunlop has engineered into the new 33 tire set. Yes. That is a shameless sponsor drop. Just nod and agree. I own a 250F and a 450, and between the Sunoco race fuel I’m using, the few performance mods I’ve bolted on, and the tires, the only thing holding me back is lack of talent. What we’re now seeing in supercross are motorcycles that are developed at excruciating detail, producing biblical amounts of horsepower, delivered by computer systems that know how to keep the rear wheel tracking. Modern day four strokes are the reason the tracks seem so short. We have known it for years, the fact that four strokes are easier to ride, but now that we are regularly seeing sub 50 second lap times out of the top guys, the truth is standing there in plain sight with a middle finger up at as.

At what point does the sanctioning body that develops the rules step in and do the same thing other motorsports consortiums have? There is nothing wrong with spec racing. Am I saying every bike needs to be made the same? Absolutely not. However, a few regulations the AMA could come up with and realistically enforce might raise the tide for everyone. Last year was the final year for unregulated spending in Formula 1. If the absolute premier motorsport has the foresight that computers and exotic parts have the capability to ruin the sport, I’ll take that as a call to action for the rule makers in supercross and motocross to follow suit.

3. Engine mapping must stay the same throughout the entire event, including no launch mode.

4. No digital systems of any kind can be attached to suspension.

I’m not going to sit here and wrack my brain trying to figure this out by myself. What are a few rules you’d like to see? *BUT* those rules cannot inhibit the aftermarket industry into being irrelevant. And the rules have to be enforceable by the AMA realistically, meaning you can’t make up a rule they can’t enforce, eg; horsepower limit that can only be tested on a dyno.

What I can close with, is that without a doubt the tracks are not the problem.