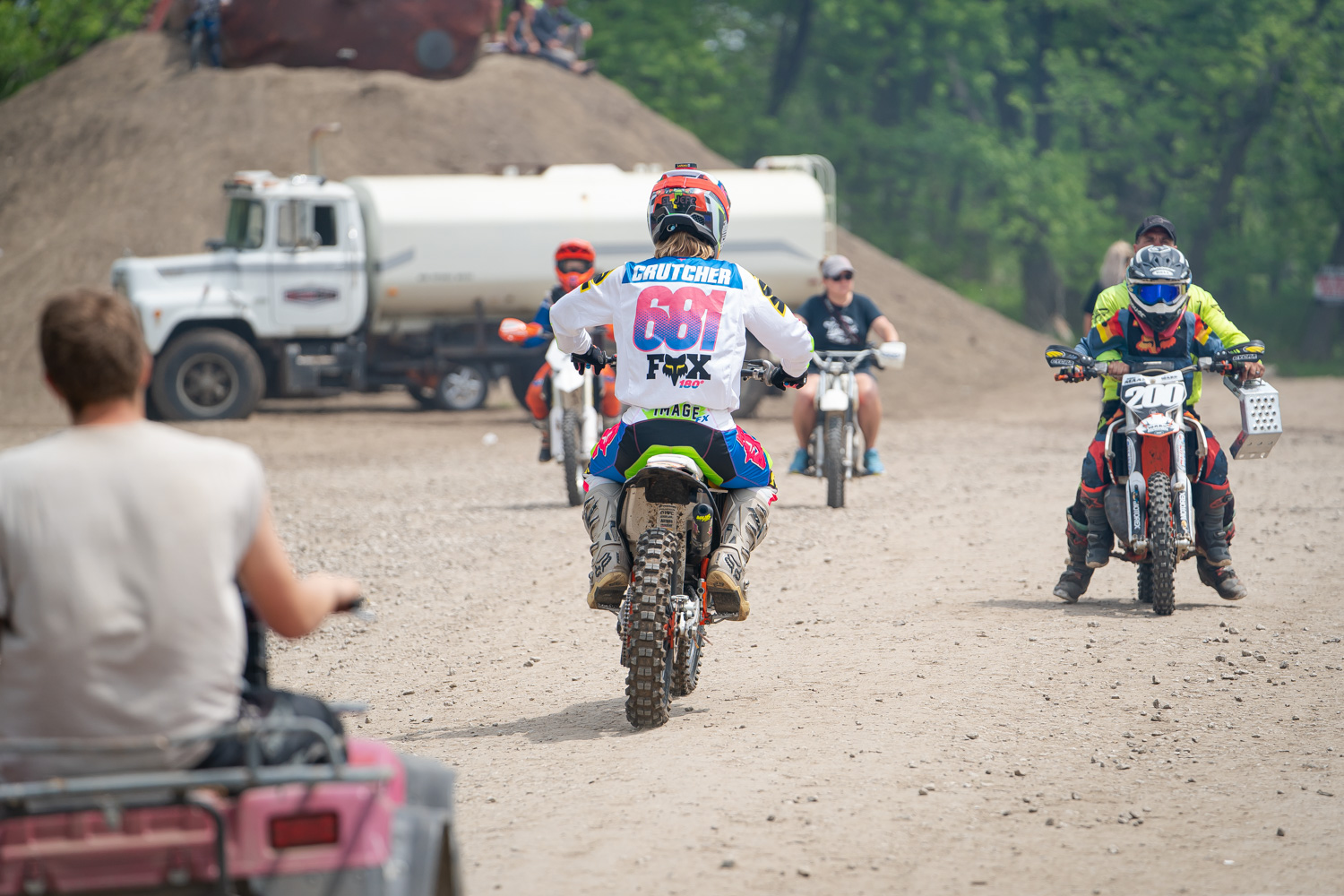 Over the holiday weekend Dad, Aubree, and I took the big motorhome and trailer up to Michigan’s Baja Acres for the Brawl. It’s a race I’ve wanted to participate in for a decade, but being so low in seniority at FedEx kept me from being able to bid time off around Labor Day Weekend. Since quitting the corporate life, a lot of riding and racing opportunities have been unlocked, including the Brawl.

Friday was practice and I was taken aback at how gnarly rough the track got by the time I was scheduled to go out for my first session in group 14. I’m fast and love sand, and there were jumps I straight up said “nope” to on the first time out. It was that rough and took some time to talk myself into feeling okay on the bike. Saturday was Race Day 1 of 3, with +30 as Moto On. As much as I love racing the 250 and 450 pro classes, they paid 100% and so did the plus classes. Guess which one had more entries? The larger purse and lack of savage teenagers swayed me toward the vet divisions.

In +30 I got schooled by Broc Peterson (an 11-time 450 national qualifier), Randy Woodring, and Dan Petrie, Michigan Mafia members that absolutely rip. Honestly, I was surprised how fast my fellow old dudes were hauling the freight and knew I had some work cut out for me in the remaining motos of the weekend.

Moto One of Two-Stroke Pro started pretty pimpin’ for an ol’ boy and I pulled the holeshot over Chris Blackmer, Jack Chambers, Peterson, Kehoe, and accompanying bad dudes. I was “off” still, and being off is something of an anomaly for me. Blackmer, Chambers, and Caleb Carter positioned past me and I sat in a tight fourth place, just as I did in +30. Chambers, however, made a series of mistakes and I gained back up to his rear wheel after a taste of blood in the water. I was doing my best Kasparov coming down the longest hill of the course while negotiating the massive double and two singles, planning to swing out before the most rutted jump on the course. I was quick in the tight twists just before the finish section and went wide to set up for a potential RPO for podium going into the final corner. All of it depended on how well I could grease the three final jumps.

Then, I woke up with one arm over a guy in a yellow EMS shirt and the other over my dad, as I needed assistance off the track and getting into the UTV. Blink, and I’m climbing onto the exam table in the medical rig. Brittany and Mike were the medic’s names according to the stitching on their shirts and I buzzed through their initial line of questions asking where I was (for the second time, which I later realized) and the other standard awareness protocols after a head injury. I asked “Brittany, is it normal to have deja vu right now?” She suggested a visit to the local hospital and I declined. I knew I was okay, but the surreal feeling of being clueless outside of my geographical location had me on a feedback loop as everything I was seeing was “new” for the second time.

Mike didn’t have to ask where I was pitted, because he remembered my neon rainbow 250SX. Thanks for the help Mike, because the location of my pit was like a missing detail card in the game of Clue. Once back to the pit I sat and observed my existence through a third party lens. Couldn’t remember the track and couldn’t remember the moto, but could remember cross-rutting behind Chambers.

After sitting in the same blue pit chair for at least 45 minutes, I angrily peeled my gear off and the details came back to me like a new stripe on the highway in a heavy fog. Still pissed as hell because Archview’s Mo State doubleheader was totally off the radar, I started to cool down and count my lucky stars that I’m walking away from my hardest hit in 6 years.

It’s an inevitability to crash racing motorcycles. An inherited liability is assumed and accounted for every time you start the bike, a bit of a dark reality you have to put in your back pocket until it finally comes out to bend and break you.

Circa 2002, an old friend of mine I stuck tight with via AOL, went riding at an organized under the lights practice at Perris and hit his head hard enough for a knockout. Brett Klein was a year or so older than me, a guy I raced intensely more than one time in the Novice class at amateur nationals. As I remember, Brett took the short drive home by himself after the hit and immediately went to bed. His dad worked nights and wasn’t too concerned with Brett’s condition because he had no symptoms to warrant coming home and looking after him. What they did not know is that going to sleep shortly after a concussion can be bad news and Brett never woke up. After that happened, every time I’ve had a concussion I’ve made sure to have someone wake me up in the middle of the night and check on me, and should be standard practice for you if you take a dirt nap. Sometimes you wake up and feel perfectly okay, but it’s what you can’t see under your lid that can be severely damaged.

On the same day, around the same time as my crash in the Two-Stroke class, that dark reality came creeping out and met Alex Malott, my closest competitor since 1995 and longest-running rival and. Coming back after a recent arm injury at the LLRQ in Iowa, Alex was putting in laps at a private track in famed because of its odd name Tonganoxie, KS. To my understanding, Alex got a five-piece roller section wrong, went over the bars headfirst into the next corner’s embankment, and was far enough ahead of the bike for it to frame him in the back of the helmet, an impact strong enough to place him into an immediate coma. After multiple procedures including removing a large portion of his skull to allow his brain to swell, Alex was diagnosed as unable to recover. An organ donor, the medical team scheduled to place him for donation after almost a week of trying everything possible to bring him back.

Tragedy will strike and eventually, it will do so close to home. I walked away from my crash, albeit assisted and wobbly, while my friend would never consciously see the world again. And for what? Dirt bikes? From the surface level, the whole enterprise becomes such an idiotic pursuit that never ends well. Less than 1% of motorcyclists make a living through two-wheels and it’s a hobby that seems so silly to anyone with sensibility.

Yet when I was sitting under the canopy of the camper, gazing off at the national-caliber track that I had no recollection of its course, I gave no mind to how I got away with highway robbery. In fact, I was the one that felt cheated out of a good weekend and time on the bike. Pausing time and peeling back the layers of that exact moment, a haze of my immediate reality when half of my gear was in a pile next to me, with a water bottle in one hand and the other squeezing the lavish lawn chair trying to navigate an emotion cocktail, I can see what it is.

It’s a life worth living. Risking life and limb is not the objective, but a byproduct of spending every waking hour with obsessive prejudice for riches. Not the kind you can put in a pocket, place on a shelf, or use as currency. Riches of experience, friendship, camaraderie, rivalry, travel, competition, and love. When born, you’re guaranteed only death and taxes. Piling cash and monetary wealth is a vapid quest for something not worth talking about.

Not once during Alex’s visitation were any of us talking about how much money he had, his truck, or his house. Instead, the night was filled with old war stories by racers young and old, some from as far as a thousand miles away. The ambiance was both laughter and tears, memories of an existence that we will cherish for the rest of our time during the blip on the universal radar.

“Racing is life. Anything before or after is just waiting.” – Steve McQueen