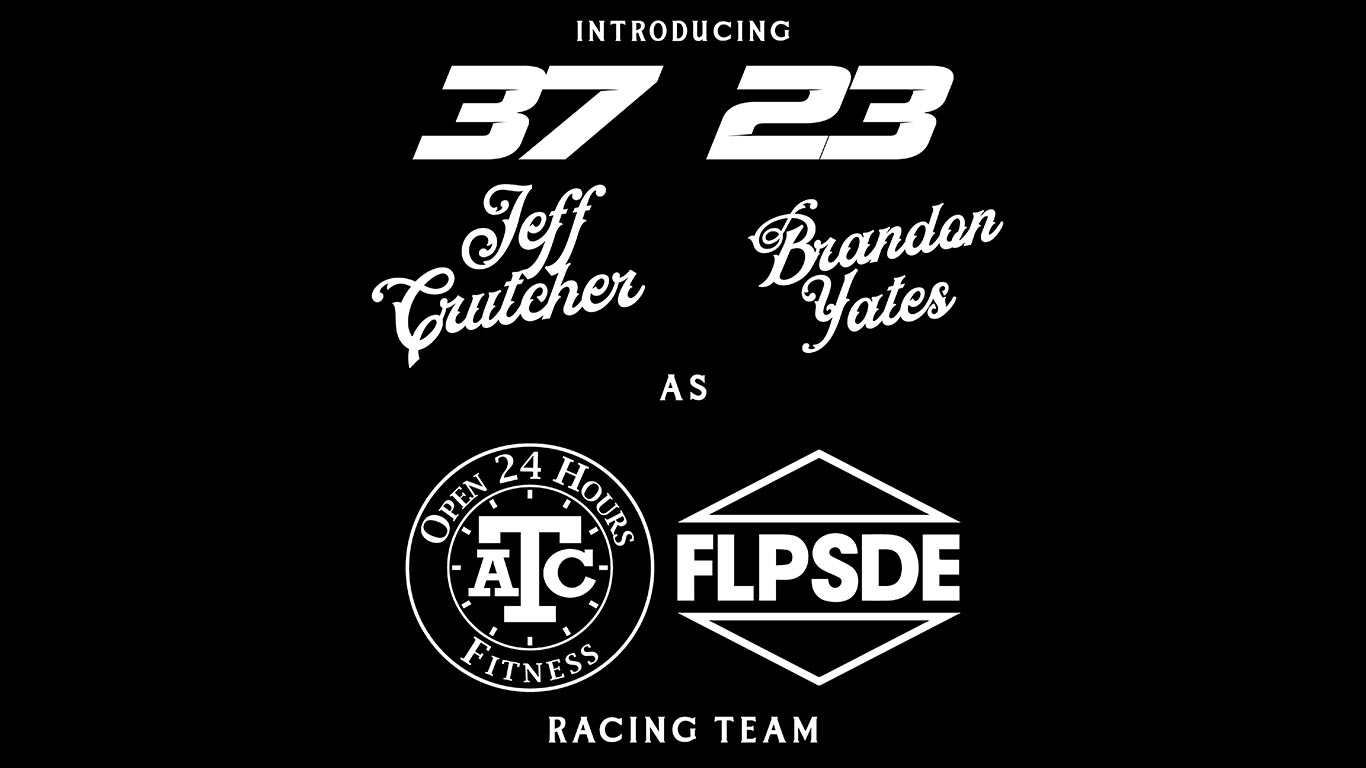 I started a team. As you’d expect, things like sleeping and unoccupied thinking time have gone into the sewer. Thank the lort cellular minutes are free now because the amount of time I’ve spent on the phone working with our partners has been biblically extensive. With that, I introduce you to ATC/FLPSDE Racing. I want to give insight and transparency with the team, but obviously, there are some details I have to keep secret. I believe that if I can give out some of the knowledge I’ve learned in the past two months, it may serve as a roadmap for other racers looking to bring in out-of-industry companies to participate in marketing to our spend-happy demographic. Additionally, I’ll explain some of the inner workings of negotiating with a technical partner that serves our industry.

First, I need to start with a quick about for ATC and FLPSDE. ATC is a 24-hour fitness center chain spanning across western Tennessee with a focus on the Memphis-metro area. FLPSDE is a dual-chamber beverage bottle, with 20oz liquid storage on one end and enough dry storage for a full serving of snacks on the other. Both companies see the vision of the race team and are on board with our solutions-based marketing that breaks out into a racing team. They are supporting us and I ask you to check them out if you’re located in Western Tennessee or need the ultimate adventure-ready container.

We’re going to be a two-man organization, featuring Brandon Yates and myself competing in the Hoosier Tire Arenacross Championship, hopefully riding a pair of KTM 250Fs (as of right now, I have a KTM 250F and Yates a Husky 250F). We’re working with our KTM regional director and trying to acquire another orange for Brandon, but since motorcycle manufacturing has been a dumpster fire this year, manufacturers are holding on to their new inventory like Rodman after an airball. It’s all understandable, and since I came into the idea of starting this team in early August, I was about five months behind in the realm of branding negotiations.

Whatever preconceived notions you may have about what a business entity is looking for out of a sports team, take those out to the burn pile. The amount of four no, five-dimensional thinking required to understand the needs of any company is measurable in tons. However, the easiest way to start is by asking a series of questions about the business itself. Don’t get too invested into a list of bullet points, because it’s a very fluid conversation, unlike a previous one you may have had with another company. Start with one question the same way Bob Ross starts with a single color and then happy little trees your way through the conversation with free-thinking.

One of the thinking dimensions required is realizing logos on the bike ain’t what it used to be. I bet you scrolled past a photo of someone riding above the link to this article, but can you remember a single logo on that motorcycle? Can you remember what color the bike was? Yes, logos on the bike are part of the package. No, they are not the selling point. It’s a sidebar, regardless of how gigantic the logo might be. That leaves you with the realization that we aren’t cashing checks written on exposure. We’ve all been exposed to Monster, and other than the logo being identifiable, pure exposure to the brand is diddly. A brand doesn’t sell a logo, they sell a product.

What in the hell does a company need then?

Content. And a lot of it. As you can pretty quickly see through a scroll on the Swap homepage, content creation is the paramount key to successful branding. If you don’t live under a rock, you’ve seen everything go digital. When TWMX folded, the idea of going into print for Swap as a publication probably never even crossed the mind of my supervisors. Opposed to the olden days of logos on the bike, an ad in the back of the mag, and a free t-shirt to your rider, a corporation needs a breadth of coverage. Social, digital, print, written word, merchandise, multimedia outlet, video, and audio is just the tip. A diversified campaign targeted toward every channel possible with tact, not just bulldozing the logo forward.

Recently I was taken to school on the subject of deliverables. It’s a goofy word but carries weight. Deliverables are the quantifiable measurement and roadmap to guaranteed content creation. They’re also the founding blocks of contractual obligations with a partner. In the world of marketing and advertising, deliverables are how most brands can track actual return to a campaign.

I’ll give you an example of what a digital deliverable is and how it compares to a physical deliverable. Because while they often go hand in hand, and usually rely on each other, they’re vastly different in scope of actionable conveyance.

In today’s lesson, we’ll use Maxima as the subject. First, think of a team that uses Maxima products. Was your first thought PC Kawi? Given that PC has had Maxima as a technical partner for decades, that might be the first rendering in your mind. Mitch has built his motors around one of Maxima’s lubricants, can you name which engine oil PC uses?

Now I’ll work this in reverse: what oil brand is the manual’s choice for KTM and Husky? According to the book, it’s Motorex. From the jump, you just assume that for top performance of the Euro engine, you’ll need the oil of Switzerland (which is actually manufactured in Minnesota). This is where a deliverable comes in.

You’ll see on the social media pages of the ATC/FLPSDE Racing team one post per week that has a remark about Maxima ProPlus full synthetic engine oil always mentioned with KTM. The goal is to create brand assimilation between the top name in racing lubricants and the European motorcycle. Just because the bike comes with the Motorex sticker on the clutch cover does not mean it’s your only option.

The second half of schooling is the physical deliverable aspect. We can create a lot of buzz about a product, but we still need an avenue to sell the product. Parts Unlimited carries Maxima as a featured product and has done so for a long time. At my KTM dealership, they sell Motorex, XPS, Yamalube, and Maxima oils. The first three are required to be sold per their contracts with KTM, Can-Am, and Yamaha. Every unit sold comes with a service manual and in that service manual, you’ll find a call for their associated oil brand.

Cycle Zone sells Maxima as the aftermarket premium choice to what the OEM’s recommend. As part of my negotiations with Maxima to be the chemical partner of the team, we outlined a physical deliverable that will change the way oil is displayed at the dealership and we’re also working on building a Maxima care package that will come with every new unit sold. I got our PU rep Nick Spooner involved and jazzed him up enough to help the dealership with a new display, promotional material, and technical datasheets for the featured product that sells best at CZ. Again, more than logos on the bike.

As the team approaches round one of the series, set to launch November 13th and 14th in Oklahoma, there is still lots of work to be done. I have to secure aftermarket products for two motorcycles from 13 different partners before we do the team photoshoot. We’re doing a bike-porn shoot inside the Fuel House, a motorsports country club that’s been built inside the old Tiblow Flour Mill in Bonner Springs, KS. Then, we’ll move to the track and capture a full day of riding shots, or at least enough to last the four-month racing season. But before we push the bikes into the Fuel House, we’re looking at an entire weekend of building the motorcycles out, plus the time spent ordering the display table covers, a back wall for the pit, team merchandise, and then figuring out how to get everything into a Ford Transit.

With all of what I’ve said above, I haven’t even mentioned training and on bike preparations for the series. Arenacross has never been my strong suit. It used to scare me, even though I’d still show up and race. Now, a little wiser and more confident in my ability, I’m looking forward to working with JH2/Race Tech to dial the bikes in perfectly for the smaller tracks.

I’ve never in my life trained for AX, yet participated in a hundred events. This year, I have access to four AX tracks within an hour of me, and three more in central Oklahoma that will welcome the team. Team operations are going great, but I’m wickedly excited to come into the season fully prepared with time on a factory-level bike tested on real AX tracks. Becoming a team manager and learning the ropes of bargaining on an entity’s behalf has been a huge thrill. Now it’s time to execute the whole reason for such an undertaking. Let’s go racing!

Although the race bikes have not arrived yet, Jeff went to @adrenaline.motorplex to start dialing in the JH2 built @racetechinc suspension. We’re happy with the way things are going, and have an amazing baseline setting. Excited to get Brandon on track with the new settings now that he’s done with the outdoor nationals. @hoosierarenacross #arenacross @thecollectiveex