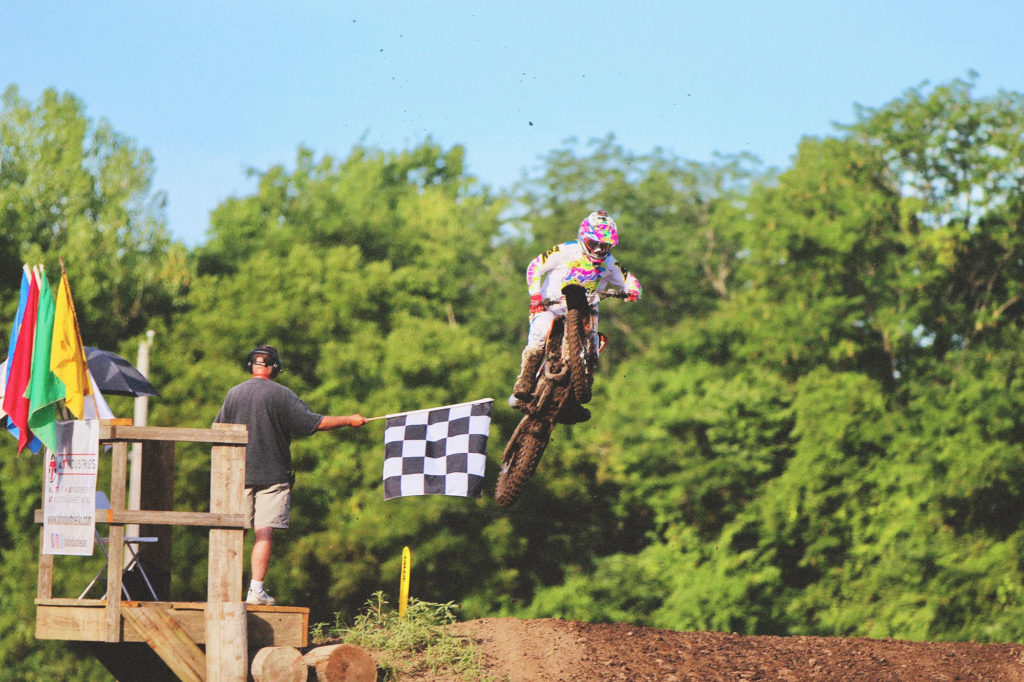 It just ain’t the same without the fans. I genuinely feel for everyone that is about to embark on the nine-round hustle across the nation, a logistical cluster that nobody is psyched about. A boatload of guys in the bottom half of the classes are already tapping out on the Tennessee-Washington-Indiana three-week death race for a couple hundred bucks. My bright idea was to borrow a 250F, head for the PNW, and give Washougal another attempt. Then the thought crossed my mind of, “But what if I don’t make it in?” The RTR ratio is a Libra’s worst nightmare. With the chance of a mechanical or just outright bad riding, not making the fast 40 means it’s back to the pits, where you’re sealed off from the world with no fans to interact with, no people watching, no self-harm/love of ordering double funnel cakes as a coping mechanism, and doing it all with a damn surgical mask rubbing the back of your ears raw.

Let’s take a moment and start a slow clap for the heroes out there who are still going to go slug it out. It’s a form of madness to pursue such a thing with no reward and it’s a thing to be appreciated. Respect to the chase, because this year it’s not happening for yours truly. Even after the heartbreak I endured last year at PIR, wadding my brains out because of an unfortunate wind gust, my wounds healed with time and I considered another go. The odds are in my favor with majorly reduced participation, but is it worth it being my first fast 40 if there’s nobody there to see it happen? No. If I wanted to blow a rack with nobody watching, I’d go somewhere not fitting to write about for Corner.

A perfect example of a reason to write off a televised local race (National with no fans and far better talent) and stick to the grassroots: last weekend at Grain Valley I netted $355 between on-track performance and coffee sales. That’s not a brag, it’s just to put it into the perspective of what the local Pro races are worth for most guys, and one girl, with a 3 digit number. To get in the gate at a National, one has already spent $450 on a pro license and $250 on a class entry(before convenience fee), plus travel costs. The loss of the fans eradicated the justification of expense. I drove to GV in as much time as it took to do a full spin of Dr. Dre’s Chronic 2001 and travel expenses were a little more than what Luniz is willing to spend on it. Everyone I have raced with this year, short of five people, are thinking exactly what I outlined here.

Where is the breaking point for guys that want to have the Fast 40 accolades? When does the whole thing fall apart and turn into the farm system for supercross teams? I’ve heard the whispers around the paddock of a permanently reduced outdoor schedule, of certain manufacturers cutting their contingency program, of other OEM’s giving direct orders to the American team operators they aren’t going racing (with any support) at all this year. With a great exclamation, it must absolutely be said it is NOT because of a lack of funding. Every manufacturer just had its best quarter on record, ever.

My belief is that we are looking at major cutbacks for every corporation across the board, who are realizing things like monthly Zoom subscriptions cost the same as paying the people that come and water the plants in the office. In the interest of shareholder’s satisfaction, companies are going to boast major black numbers during a global pandemic while on a reduced workforce and with accouterment expenses eviscerated. Customer service will likely be an afterthought during “trying times,” free shipping a thing of the past because of “national service disruptions,” and the entire system as we’ve known it up for a major change (see Walmart and Target cooperating to cancel Black Friday). All of this affects our segment in the market one way or another, beyond the fatalities caused by the virus itself. We all love a good underdog disruptor, but not this one.

Ask anyone outside of District 5 and you’ll hear the importance of Outdoors is declining. We all love it, we all want it to be a thing, we all want the great outdoors to continue to thrive, but there’s one uncomfortable fact as the neon elephant in the room. All professional sports go indoors. Every sport started in a field, on a beach, on the city park pond. Then stadiums were built in urban areas with one major thing in mind: Convenience for the spectator. Oh, you’re on concourse B? Do you go up a level to Panda Express or down a level to…Panda Express? That’s a great debate to anyone that’s roamed Angel Stadium. The hard decision when outdoors is which Johnny is least likely to be emanating fumes of toxic beer-shits? Every other professional sport didn’t have a hard time choosing which choice was the easier one for the spectator. Eventually, the manufacturers will collectively make the decision for us on where the sport is going to go, not the promotion groups. What sells more CRF110’s: Supercross or Outdoors?

See you this weekend.

Crutcher’s Corner | A Week In The Life Of JC
Michael Antonovich July 15, 2020

Crutcher’s Corner | A Week In The Life Of JC