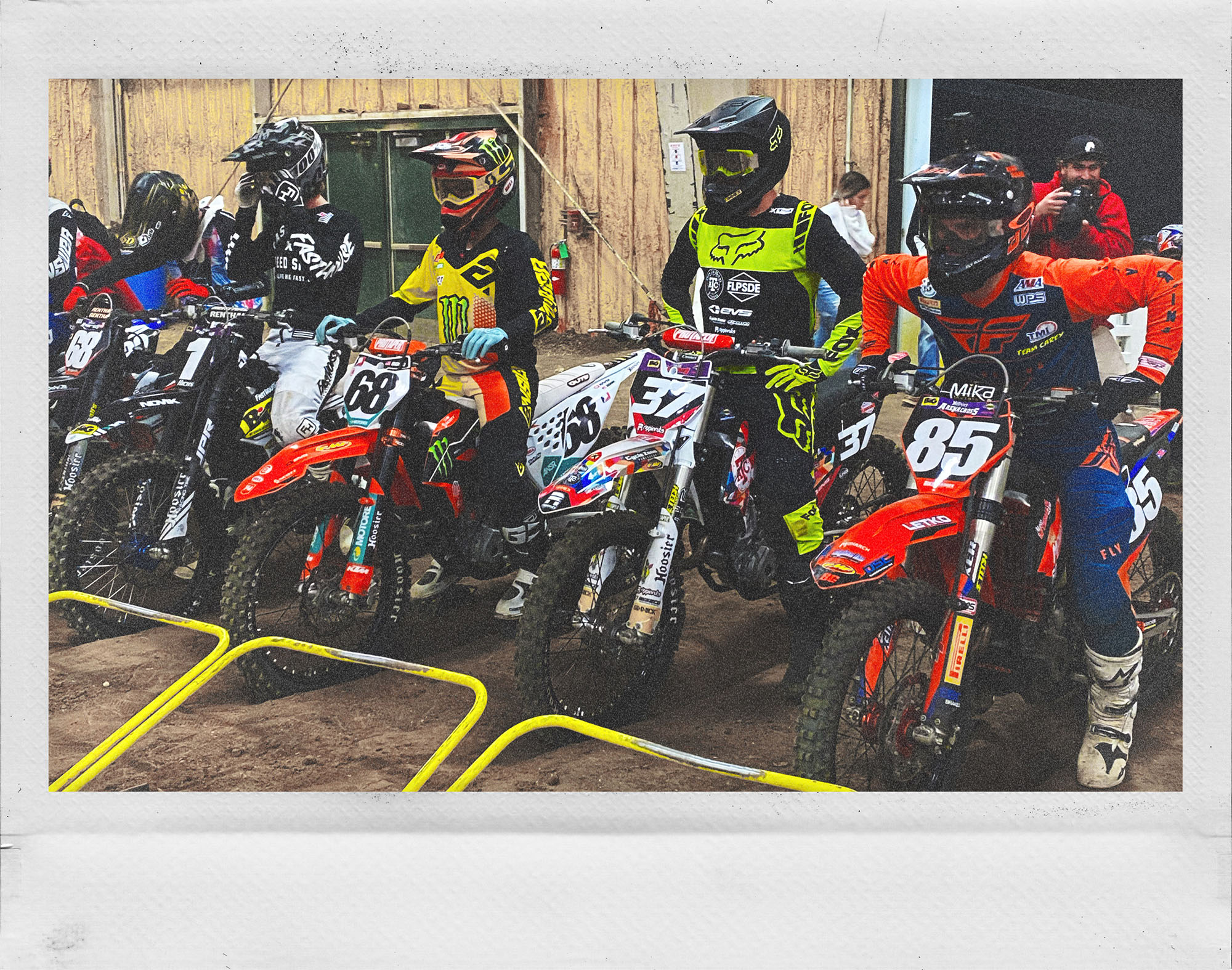 As I flip through the photos from the first race weekend of Hoosier Tire Arenacross Nationals, one photo sticks out. Anton took amazing photos as always, but the one that really slaps me up is a piece my teammate Yates snapped on his iPhone. I’m sitting on the gate, the bike is started, and we’re about 45 seconds before the gate drop. To my left is international motorcycle athlete Kevin Moranz. On my right is upcoming Monster Army big talent grom Brandon Walther, AMA National Champion and defending Hoosier AX Champion Michael Hicks, indoor assassin Hunter Angell, EBR Yamaha rising star Kaeden Amerine, Illinois top talent Carter Gordon, AMA National Number 76 Grant Harlan, additional Iowa AX hitman of Devin Reed, super beast Preston Taylor, and the added southern spice of Mathew Weakley and Matt Curler. Mix in the other 12 guys that failed to qualify for the 250 main on Friday, and one can’t help but step back to recollect their thoughts.

The results at the end of the race were very satisfactory and I ended up fifth after 15 laps of nuclear chess. But that moment before the gate drop freezes some amazing talent in a single frame. There I was, in the middle of it.

Looking at that photo, my first reaction was thinking about how I double-clutched before the gate dropped and had a mediocre launch. After the critical analysis, I couldn’t help but just stare. Such an amazing moment in time that will eventually get lost in the blur of the championship season, filed away in a cabinet of memories, and the vague shape of the event blended in with the other 18 years that I’ve been racing for money. To be in that photo, and be associated in a talent pool so deep that light doesn’t reach the bottom, is a hell of a rubber stamp feel. I know I can go fast but, gahdamn Tina.

After this first weekend of racing, 34 main event races remain. I am going to try and make a mental effort to remember each and every one of them as well as I can because there is absolutely a countdown on how many more of these are in me. Is it one season? Could there be five more years in the tank? I don’t know, and I don’t care to know. Confidently, I can say that with rounds one and two in the books and some championship points in my pocket, I know that first night of racing will be a special one. Hopefully, every one of them is equally special.

I won my 250 heat race on Friday, a mere 14 years since my previous AX heat win and although I can remember when it was, where it was, and what bike I was sporting, the memory simply remains as a W. 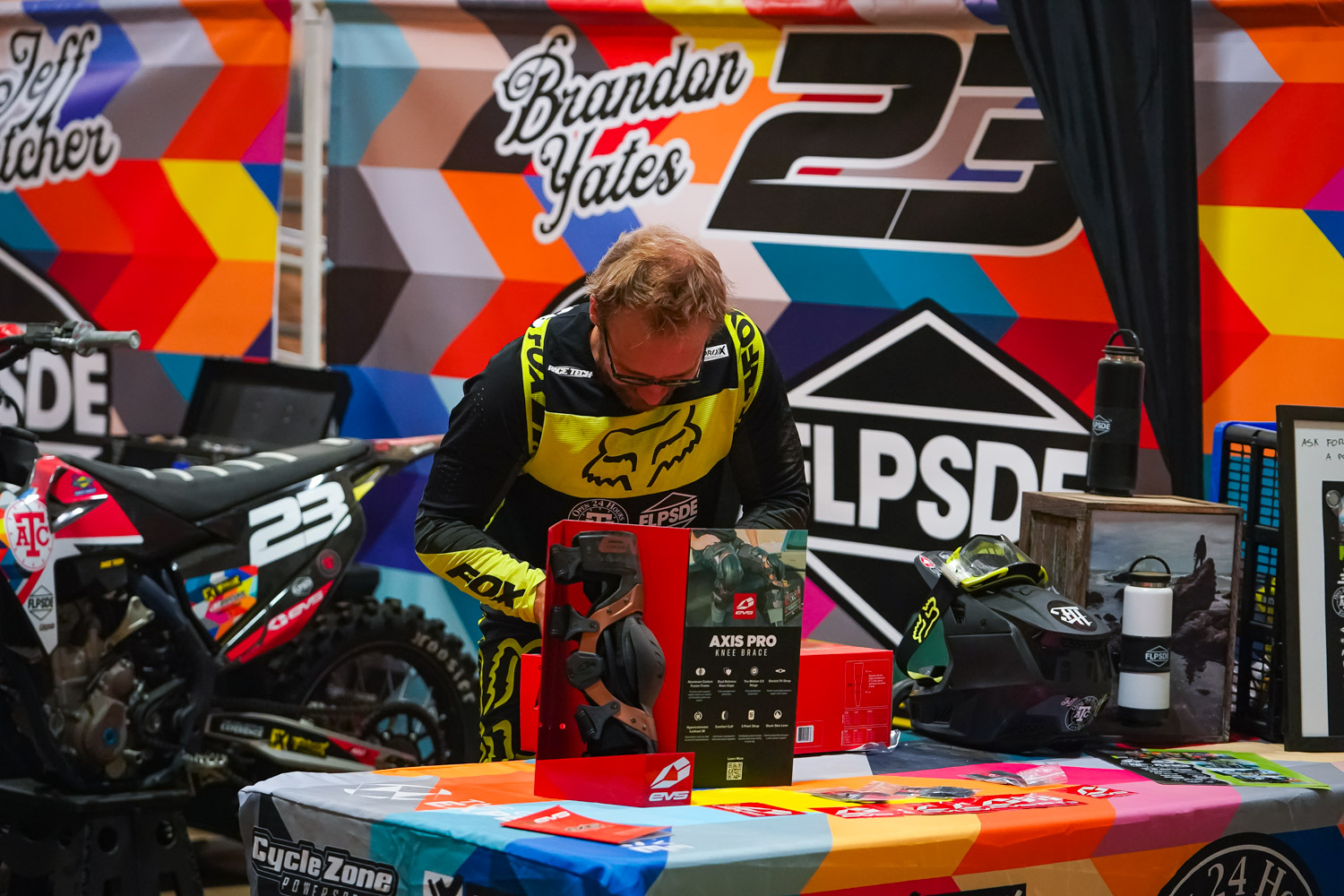 My teammate Brandon Yates and I reported to the Claremore Expo on Thursday afternoon to set up the pit for the first time and acquaint ourselves with how we are officially laying out our operation. It’s a work in progress to develop activation feng shui, but we started very strong from the jump. I built this team in two months and pinched every penny for maximum usage, but we have a great foundation and the presence of a five-year team at the first event. Before the first gate dropped, it was a successful weekend. As a note, Yates suffered a gnarly finger injury 10 days before the weekend and had to leave the bike on the stand to let the stitches continue doing their job.

Admittedly, I am not the strongest timed qualifying rider. After TQ, I sat in 14th of 24. That gave me a decent gate pick in the 250 Heat, and after a great jump, I did a bishop-like cut under Carter Gordon and stayed taped into the second corner for the lead. The track was strong with rear-wheel steer opportunity, and I stayed on the throttle through the 8 lap heat for the win. That’s a pretty strong start to the season and set the tone early for the kind of results I am capable of, which was a bit of a question mark coming into the weekend. It’s been 9 years since my last Amsoil AX, and 14 years ago that I won an Arenacross race of any fashion.

The 450 class was tough, and I did not see the same instant success through the night in that class. Competitive, yes, but just not quite enough to make it happen with a spin out in the Heat Race, and a bad start in the LCQ after taking a handlebar to the gut 4 feet out of the gate. That’s okay, still had plenty of opportunity in the 250 main.

Moranz chose the far inside gate, I was second from inside, with Walther to my right. We launched well, I cut under, and came out in 4th. I held 4th until Hicks made his way around, then Walther had a large wipeout down the middle lane before the finish which put me back into 4th. On the 8th lap, Preston Taylor cut under and got past me, and that’s how the chips fell by the end of the main. I was extremely satisfied with a top 5 performance, and the Heat race win. Friday was a large success on the track, and in the pits. The goal going into Saturday was to qualify for both main events.

Yes, in Arenacross fashion we went to the J. Gilbert’s pub directly across the street for the unofficial-official afterparty, which happened to be karaoke night. Of the 6 person crew, I was the only one that graced the mic with a 5-star rendition of Kreayshawn’s Gucci Gucci, performed with half a mushroom swiss burger down the hatch.

Remember when I said I’m not a huge TQ guy? Yeah, I went out and railed the track and cut a whole second off my lap time from the night before, yet was even further down in position for 19th of 24. That gave me ninth gate pick in both Heat races, which is garbage. Going forward, I now see that I have some work to do during TQ. Obviously, I am capable of winning Heat races, as the proof is in the pudding from Friday night. However, it’s going to be extremely hard to do with wastebin gate picks.

I don’t know where my intensity from the previous night was, but it was nowhere near the race track where it needed to be. Sometimes, you just have to make it through the night and that’s how I felt every time I was on the track. Most likely, my issue is that I started thinking about all the extra weight that comes with being team manager, the responsibility of being the lone rider for the team, and the fact that I just could not agree with my front tire every time on the course. They say the game of Golf will drive oneself mad, I’d like them to try Arenacross.

After missing qualifying in all Heats and LCQ’s, I was transferred to the Pro B-main, a page out of dirt car racing. This race is still madly competitive, as the winner has an option of $100 or 13th gate pick in the 450 main. The night ended with a solid 5th in the B-main, and I was upright to pack up the pit and load everything into the van with nothing more than the standard wear from two nights of hard racing.

As a whole, the weekend went extremely well. I’m looking forward to the next two nights of racing at the same venue on the 4th and 5th of December. Yates will be back on the bike, and I’ll have my game face on for timed qualifying.