The 350cc motorcycles produced by both KTM and Husqvarna are grossly underrated as racing options in the 450 classes. When the bike was first introduced stateside, KTM factory riders Andrew Short and Mike Alessi raced them with little success in the 250 MX Nationals, and both switched to the full-sized 450 when given the option the following season. Across the pond, however, Antonio Cairoli raced 350s to numerous MX1 World Championships against bigger bikes. but the damage was done as far as American consumers were concerned as most believe that the 350 power plant simply does not have enough power to be competitive.

We’re here to tell you that this is the biggest misconception in motocross! The most recent pair of 350s from KTM and Husqvarna are more than powerful enough to race against 450s and in many cases, enjoy a competitive advantage! This year, we were very privileged to log some serious time on a very special 2020 Husqvarna FC 350. 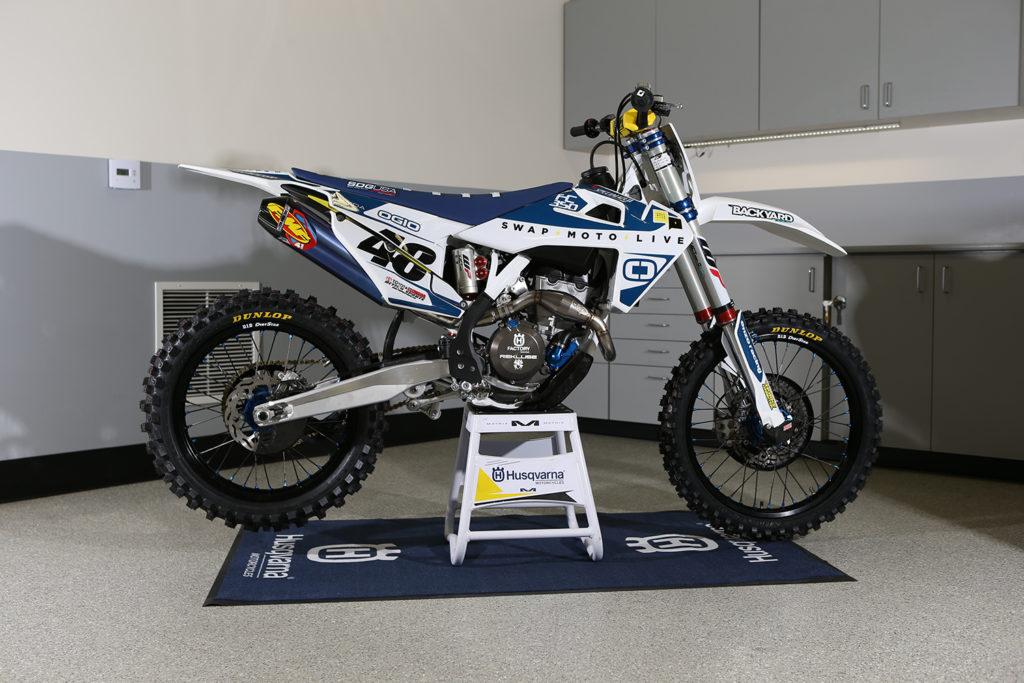 After our original test ride on the 2020 FC 350, Andy Jefferson and Anthony da Graca began to pick our minds about what we would change about the bike and it was obvious that they were taking mental notes. Cosmetically, we mentioned that we missed the old white frames as they looked racier than the current dark blue chassis. As far as performance goes we mentioned that we would prefer the WP Cone Valve spring fork over the WP Xact air fork, and would also install a Rekluse Torq Drive clutch and an FMF Racing exhaust system for better engine performance and response. A few weeks later, da Graca called and asked us to return the FC 350 test bike. Imagine our surprise when we rolled our original test bike into the shop, only to be greeted by the beauty pictured above! 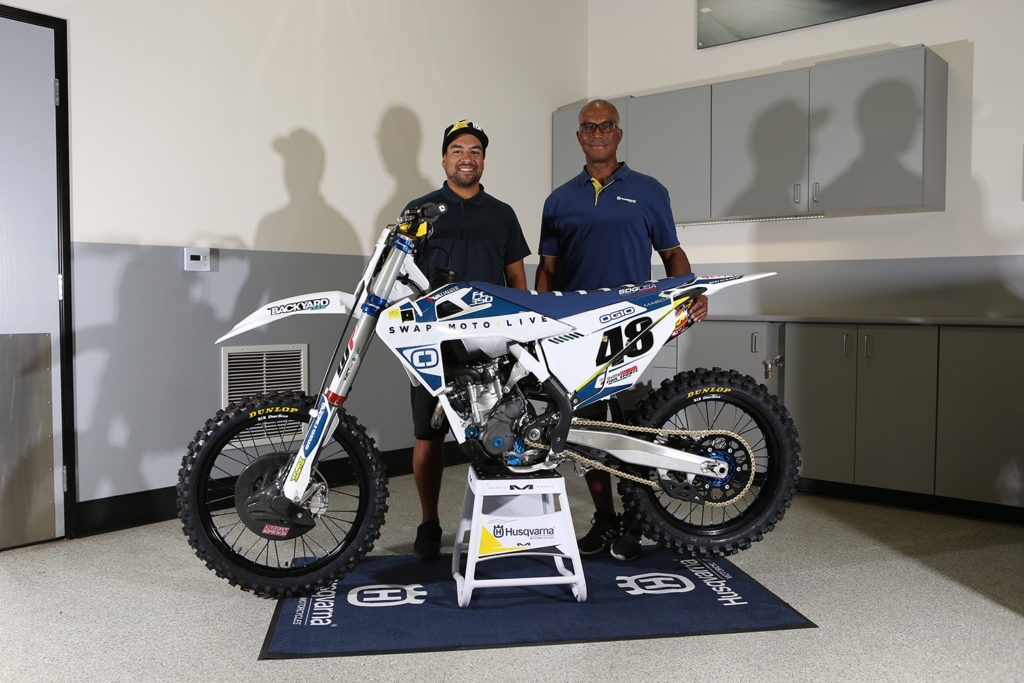 Meatball and the Bro Show

In case you weren’t aware, Husqvarna has an Official Catalog full of accessory parts and accessories, including wheels, exhaust systems, suspension components, and much, much more. Andy and Anthony threw just about every official Husky accessory part at the FC 350 project bike, from the wheels to the waterpump, to the triple clamps and carbon fiber guards. Here’s where the build becomes a dream bike, though…The FC 350 powerplant was removed from the frame and sent to the in-house Factory Services department for a race-team makeover, and while the chassis was empty, it was sent to receive a white powder-coat finish. 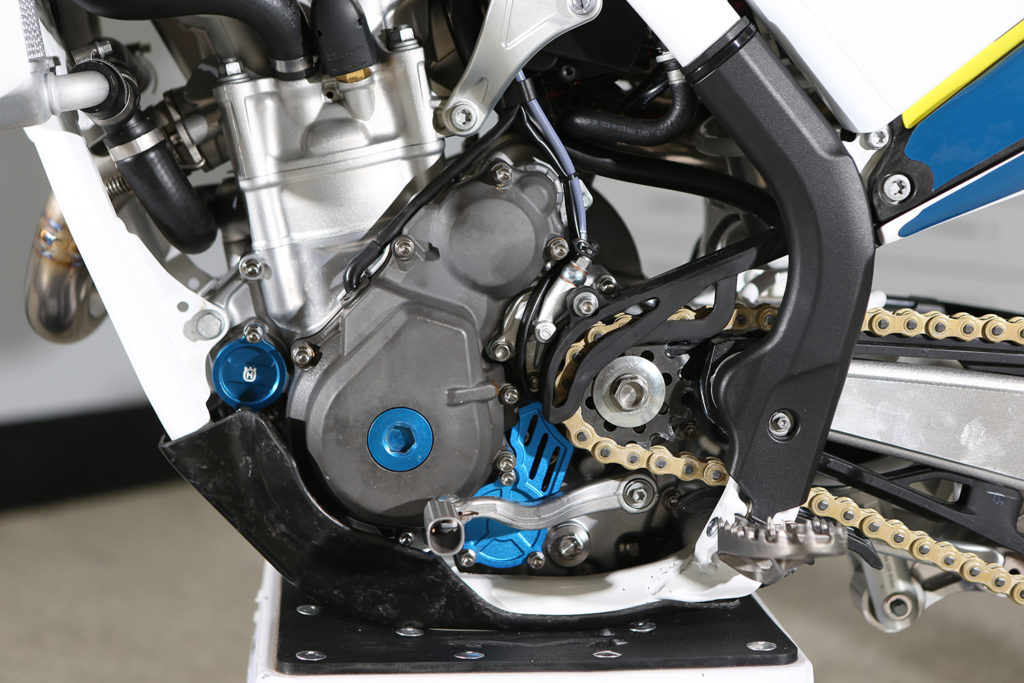 A few years ago when the Factory Services department was formed at the KTM Group, consumers could have their engines built house. IN theory, anyone could purchase the same engine package used by the then BTO Sports KTM team. Retail sales to the public, however, have since ceased and the performance packages are no longer available to the general public. And that made our FC 350 project even more unbelievable! Though there is no member of the Rockstar Energy Husqvarna motocross team that races an FC 350, the mid-sized bike is used by offroad heroes Colton Haaker and Thad Duvall, and our machine got the same treatment! 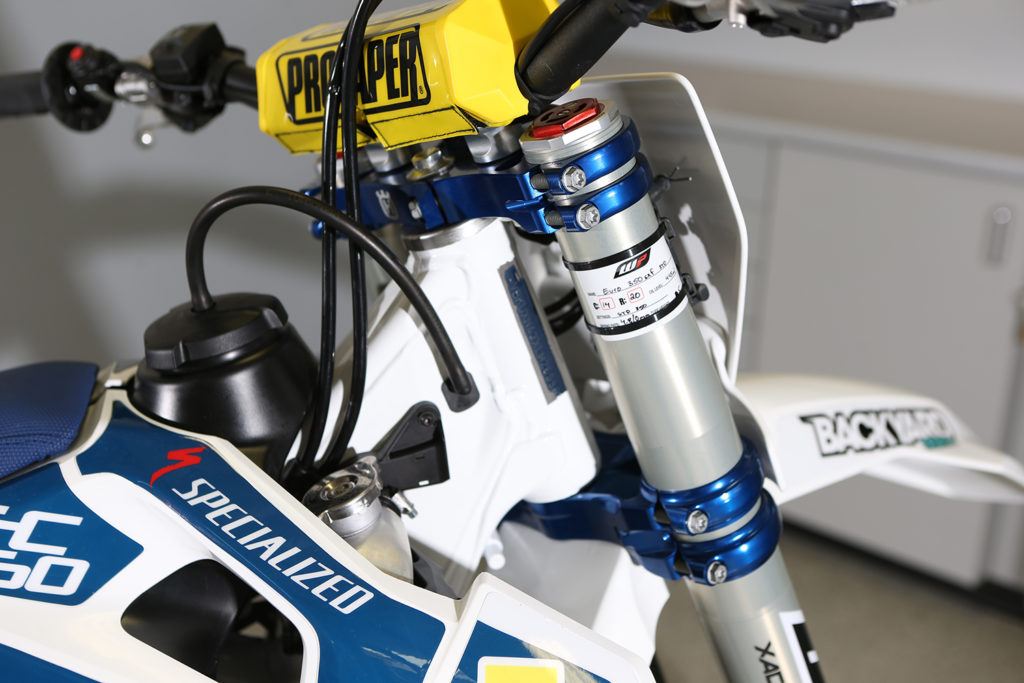 As far as the chassis goes, the bike received a set of Husqvarna accessory Factory Triple clamps, which feature a unique split-clamp design that applies more-even pressure on the fork tubes. A set of WP Cone Valve spring forks and a Trax Shock replaced the stock components, and were valved to our liking in house. 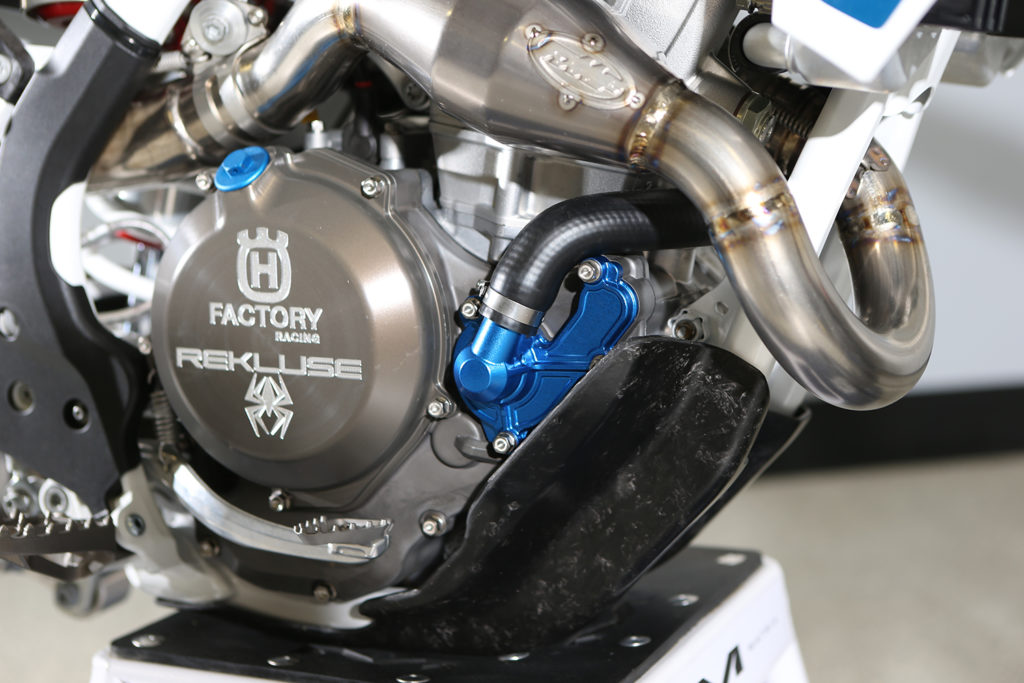 An FMF Racing Factory 4.1 Titanium system and a Rekluse Torq Drive clutch pack rounded out the performance parts installed on the bike. Cosmetically, all-white plastic pieces were added from the Husqvarna accessory catalog, including the inner portions of the airbox. Backyard Design USA and SDG USA supplied the graphics and seat cover, and the finished product was breathtaking, to say the least. 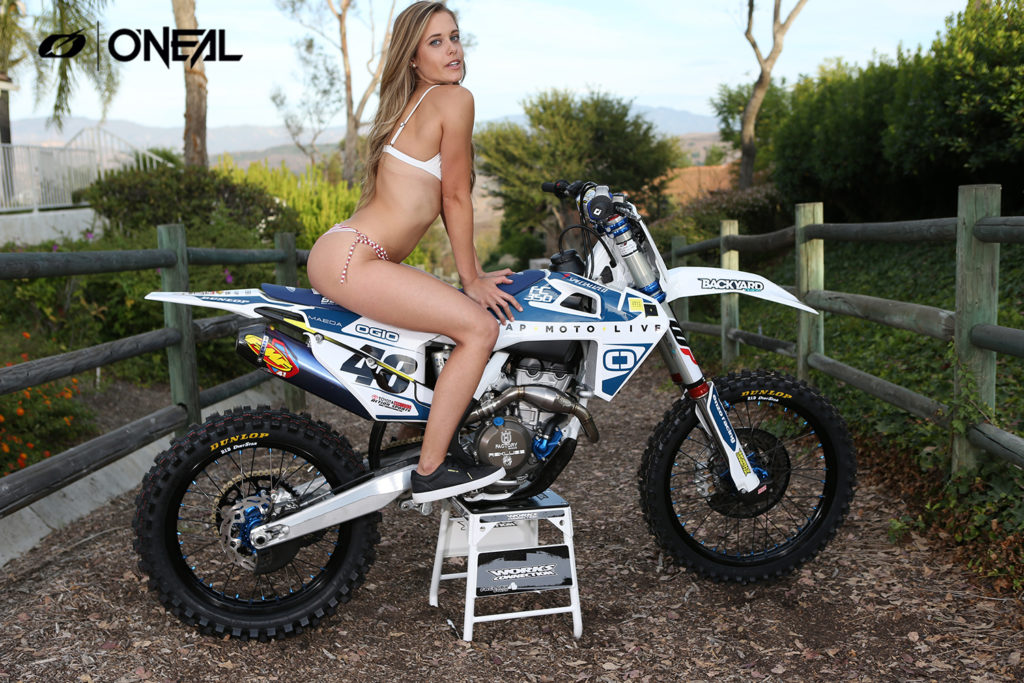 Of course, with a bike that perfect in our possession, we had to shoot an O’Neal Moto Model gallery with it before we got it dirty, right? CLICK HERE for the whole gallery of Nicole Cesa, by Chase Curtis.

On the track, our first impressions of the bike were mind-blowing. In stock form, the FC 350 boasts an impressive amount of power that is easy to control. The power comes on smoothly when the throttle is cracked open and builds steadily throughout the RPM range. Power in the more-aggressive map two setting is a bit more abrupt, with a bigger hit in the middle and more top-end pull, and enough torque throughout the powerband to allow the bike to be ridden in third gear around most tracks. The Factory Services engine is much more powerful, everywhere. From the moment you twist the throttle, power is instantaneous and plentiful, and the bike was equally impressive in map one as it was in map two. In spite of the increased power output, however, the bike still feels like a 350 and can be ridden much more aggressively than a full-sized 450. Revving it hard like a 250 produces excellent results, but the bike is easier to keep purring than a 250 and can recover with a simple stab at the clutch lever. 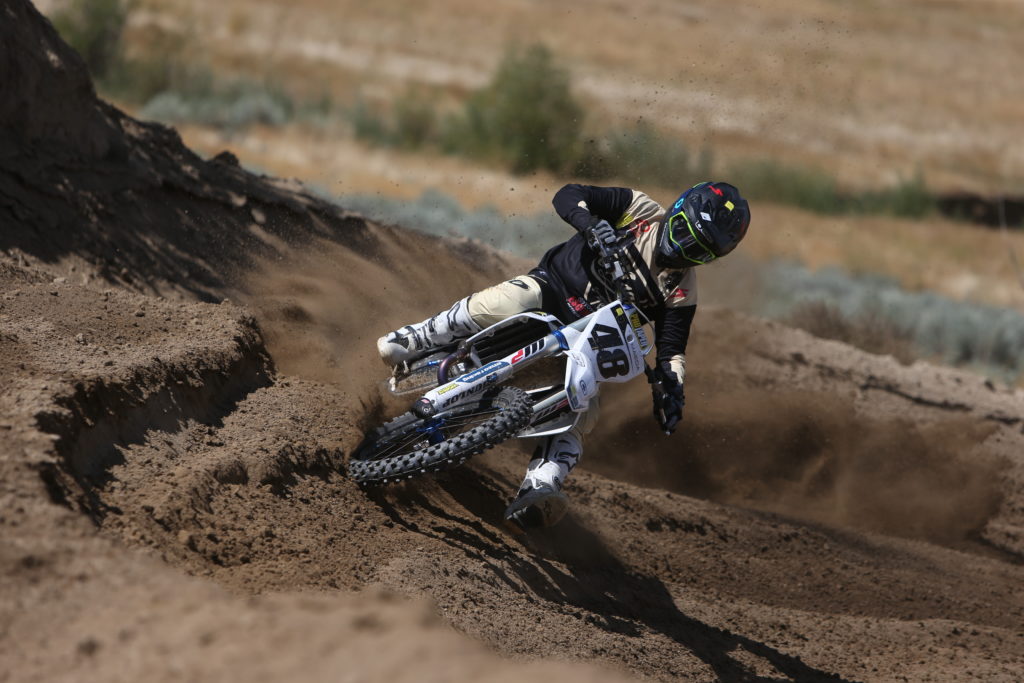 But what about the WP Cone Valve spring forks and the matching Trax Shock? Having tested the aftermarket accessory WP components before, we knew exactly what to expect. The spring fork offered a much more consistent feel and greater comfort than the standard air fork, with excellent front-wheel traction and small-bump compliance than the stock stuff. The Trax Shock out back, meanwhile, feels like.a custom-tuned part, but not as superior to the stock shock as the Cone Valve forks are to the Xact Air Fork. Still, the FC 350 handled far better than stock with greater bottoming resistance. greater comfort, and the same excellent cornering characteristics. 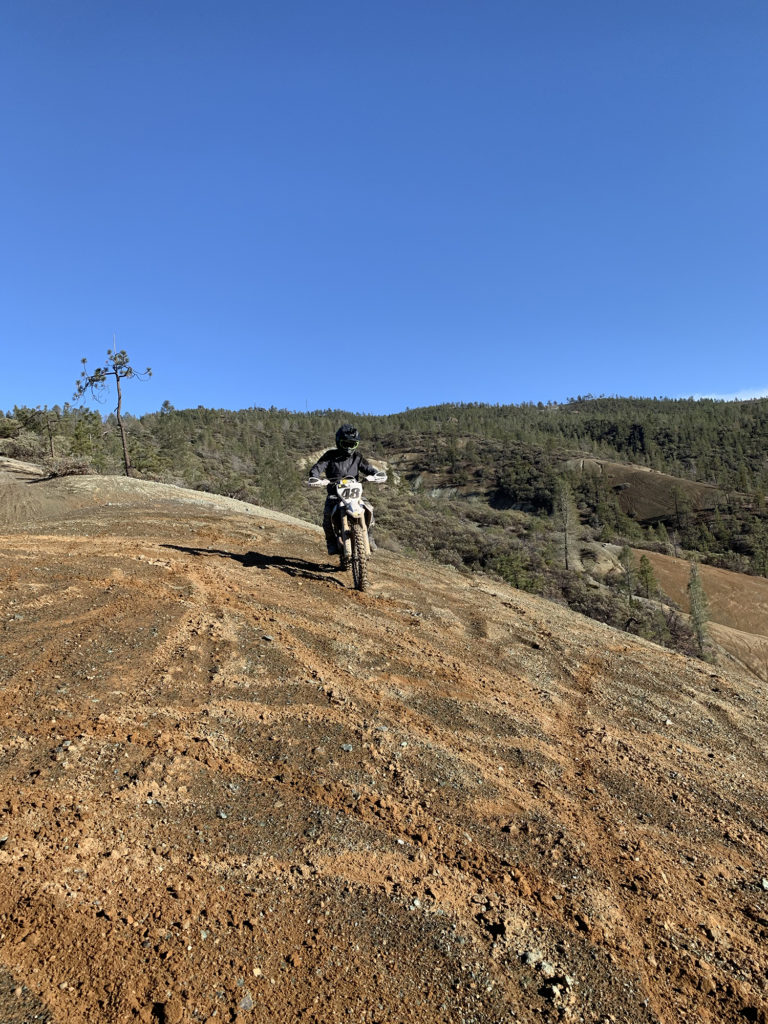 Last winter, the opportunity to do some off-road riding in an epic location presented itself and after considering the massive hill climbs and super-tight and technical singletrack that we would encounter, the obvious choice in our fleet was the FC 350 as a 250F would not have the power we needed for the hills, but a big 450 would be tough to manhandle in the tight stuff. In order to make the bike more off-road worthy, we softened the suspension clickers, added some handguards, and installed a Rekluse Radius CX auto clutch. 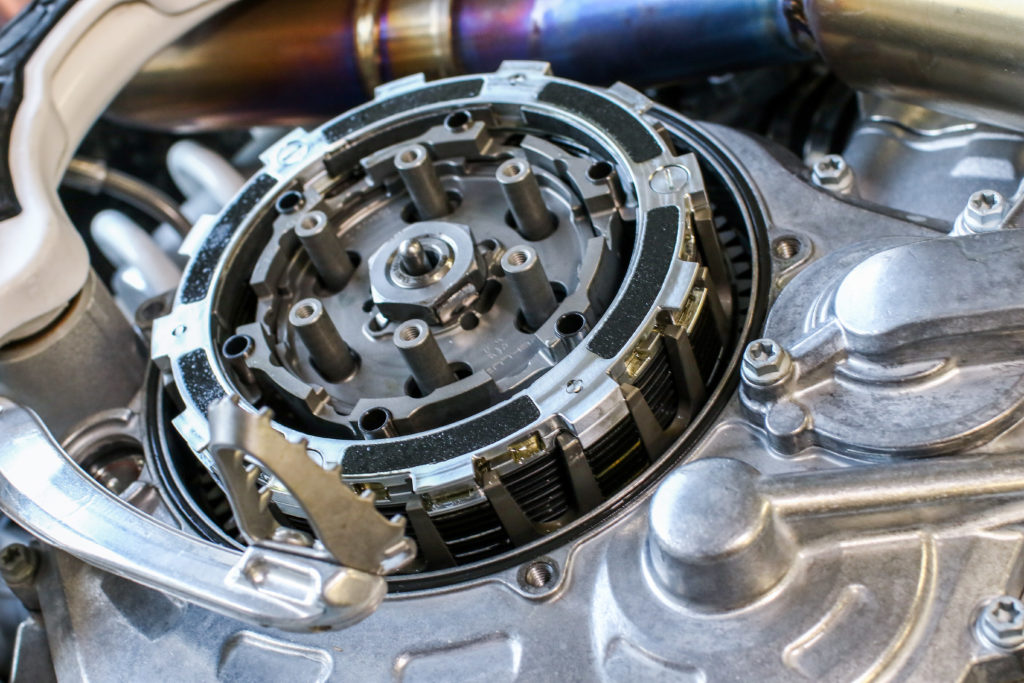 Without getting into the technical design of the Rekluse Radius CX clutch system, we will say that what it does is essentially make any bike it is installed into, impossible to stall, much like an automatic transmission-equipped ATV. The power delivery remains exactly the same, and you can still slip the clutch to build RPM with a stab at the lever, but the chances of the engine stalling under a load at low RPM is eliminated. What does this mean? In tricky off-road conditions, you can rely on the torque of the engine to pull you through, without having to slip the clutch to keep the RPM up. Believe us when we say that we will not ride off-road without one from now on!

With the auto clutch installed, the FC 350 became the best bike we have ever ridden off-road: the perfect amount of power combined with excellent handling and lightweight. Until we lugged the engine up a slippery singletrack section, we never realized how much torque the mid-sized engine actually pumped out. It is impressive!

Alas, all things must come to an end and this week we will return the 2020 Husqvarna FC 350 project bike to Husqvarna. It’s been an unbelievable eight months in its saddle, and the FC 350 truly was a dream bike. Was it the best all-around bike we’ve ever spent time on? Until now…yes!