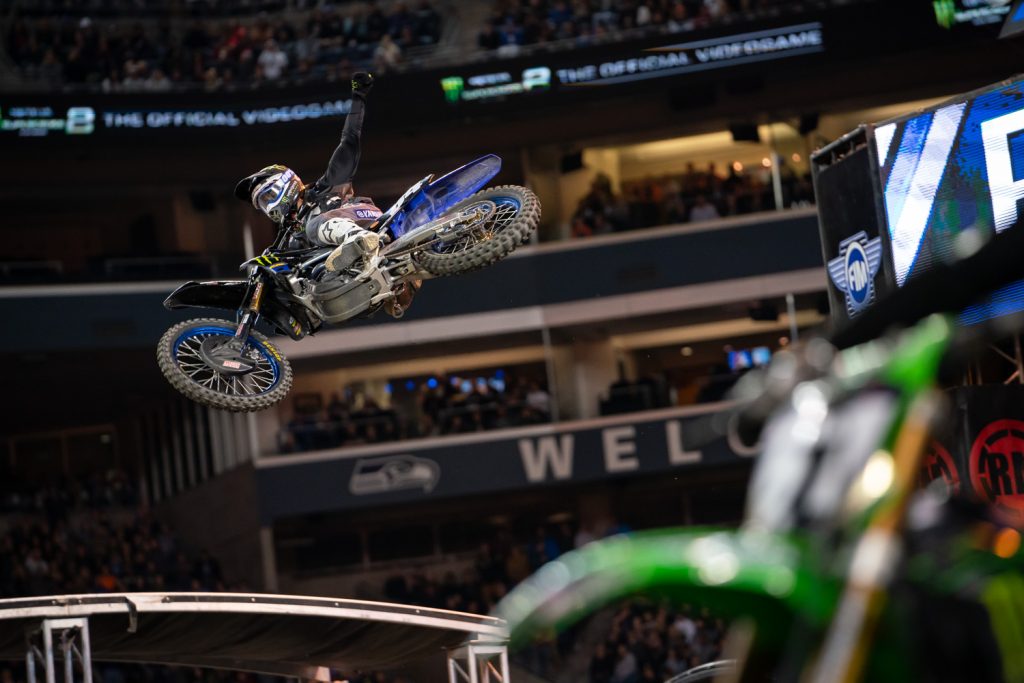 Dylan Ferrandis career plan has always been to live in the United States and race Supercross. Despite being one of the top MX2 riders in the Monster Energy FIM Motocross World Championship since 2014, the French rider told anyone that would listen that Supercross would be the focus and in 2016, he inked a deal with Star Racing and moved to California. At the time Ferrandis figured the move was going to be simple. He had a long-term contract with one of the best 250 teams in the pit area and an idea of the California culture thanks to past trips to America. Star Racing had a proven package in the championship-winning YZ250F and had Gareth Swanepoel as the in-house trainer, so many expected success to come immediately.

But instead, Ferrandis experienced severe culture shock due to the hurried pace of life in California, the differences in food, and a necessary move to Cooper Webb’s North Carolina compound, which was a major part of the Swanepoel program in 2017. “The thing is the life in Europe is really, really different than America,” Ferrandis told me on Saturday night. “We moved here to America and we tried to live the American lifestyle. I worked with Gareth Swanepoel and he was training only American guys, so I was in this group and I tried to train and live the American way. And it just didn’t work for me.”

From the southern part of France, Ferrandis was used to long dinners with friends and wine, but these things were not easy to replicate, and he felt frustrated by the lack of care people put into their meals almost immediately after arriving in America. “The worst thing for me to live here is the food, for sure. I come from France and I am lucky because we have good food. It’s not just the quality of the food, but the way that we take care of dinner and lunch,” he told me during his very first day of Supercross practice in 2016. “But here it’s crazy because it’s all quick and people eat because they need it for their body, but they don’t really enjoy a meal. For me that is really difficult. At home on the weekends I like to hang out and go out to restaurants with friends or my girl, but here I don’t go because I don’t enjoy it. People are not nice and it’s really different with the way to eat.” It was understandably difficult for Ferrandis to adjust to life in the United States and by the summer of 2017, the change in life had an impact on his morale.

In response to the issues that arose during the first year in America, Ferrandis decided to move back to California full-time and asked David Vuillemin to serve as his riding coach and later, trainer. The duo developed the YZ250F to Ferrandis’ liking with different parts and settings, and the improvement was obvious in the first races of 2018. A hard crash at the 2018 Atlanta Supercross left Ferrandis with a list of injuries, but the progress in the early part of the year made it clear that they were on the right path. 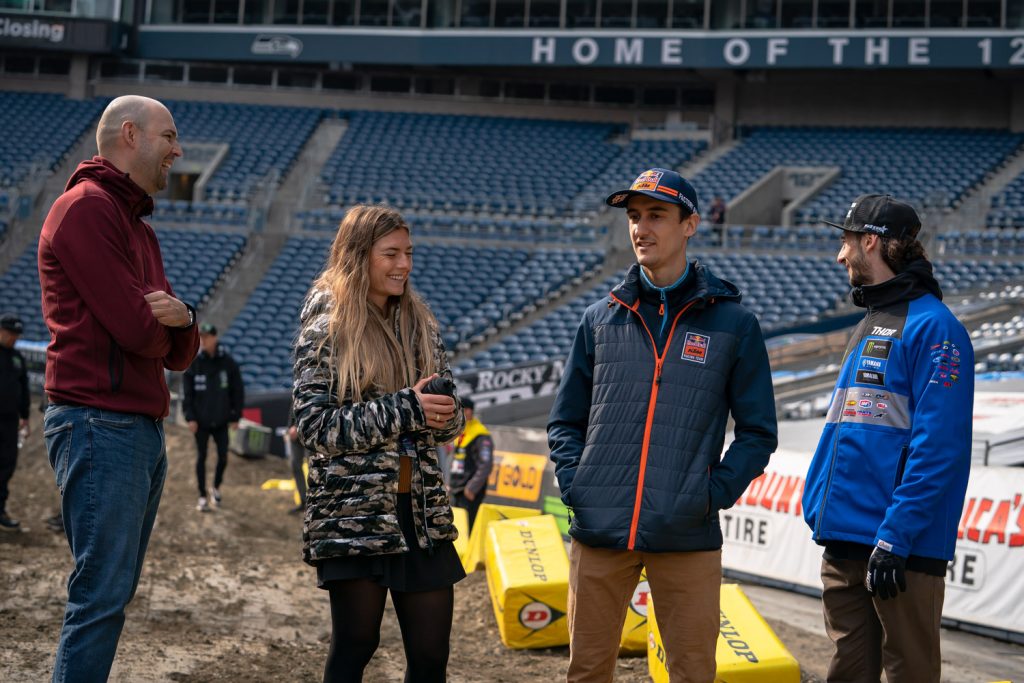 There’s a unique dynamic in the pit area this year, as Marvin Musquin has also hired Vuillemin to be his riding coach and cemented a close friendship with Ferrandis. Spend any time around the group and you’re sure to pick up on their European attitude. The trio chats in their native language during track walk, their significant others Mathilde and Nastasia have a constant caring presence, and French friends like Stephan Legrand of LeBigUSA and Antoine Charrault are around to break the tension of race day. Dylan and Nastasia have found a number of French-style restaurants in California that serve the food they grew up with and they take advantage of breaks in the schedule to sightsee or relax by the beach. It’s a deliberate decision that gives a sort of connection to home and Ferrandis says it’s aiding every aspect of his life. “It’s sad to say, but I’m too French. My phone is in French, I’m in kilometers, I just watch French movies. I started two years ago working with DV and he’s the same as me, he’s way too French,” he shared. “We live the French way in America. It’s the way we are happy and when we are happy in life, you can train better and work better, and the results show.” 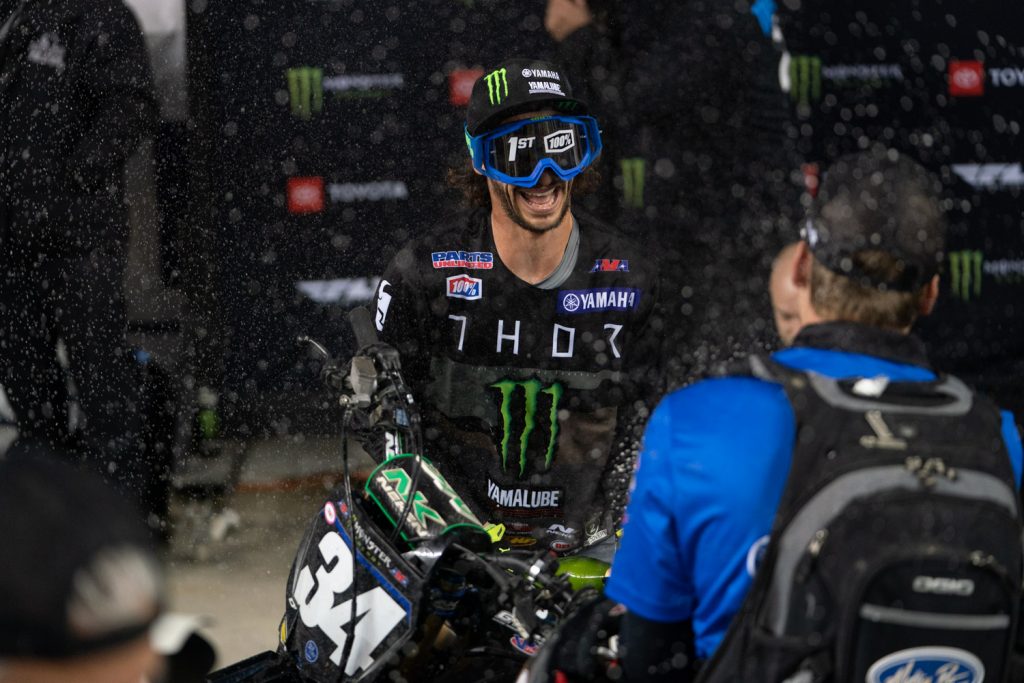 How Was Your Weekend | Houston Three Supercross
Donn Maeda January 24, 2021

Houston Two Supercross | How Was Your Weekend
Donn Maeda January 20, 2021

How Was Your Weekend | Houston Three Supercross

Houston Two Supercross | How Was Your Weekend