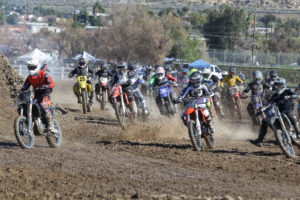 The Swapmoto Live Motocross series had its first race at the Lake Elsinore Motorsports Park as the third round of the El’ Dorado Series kicked off.  This round passes the halfway point of the first series of 2022 and includes contingencies by four different manufacturers leaving money up for grabs for the racers.   The Lake Elsinore main track is known for its higher speeds and tricky jumps and the Amateur Track is also a very jumpy tracks, including a 4 jump rhythm section in the front.  There was a lot of anticipation going into the race because a lot of racers had not raced on these tracks before.   The racing on both tracks was strong throughout the day with battles in all of the motos.  The unseasonably warm temperature added another layer of challenge since the racers have been used to the winter days in the previous rounds.  The Lake Elsinore track crews had the tracks in perfect condition to start the day and kept them in great shape through the motos. 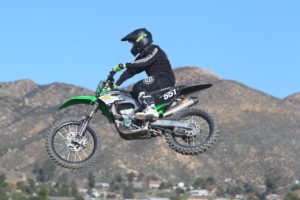 The 30+ Novice class kicked off with a heated battle in the first moto.  Jacob Jokela put his KTM into the lead at the start of the moto, followed by Vance Freeman close on his rear wheel.   Jokela was able to gain time over 2nd place in each of the opening laps, but Freeman was not giving up.  As the laps wound down, Freeman started making up time after an almost 8 second gap.  When the pair crossed the finish line, Jokela was still in the lead, but Freeman was close behind in second place.  Damon Hawks rounded out the top three of the moto.   When the second moto lined up, Jokela did not have the start he wanted and was far behind the leader on the first lap, giving Freeman a good shot at the overall win.   The gate dropped and Freeman launched into the lead, opening up the gap to second place Anthony Garcia.   With each lap, Freeman was pulling a bigger lead and had an easy win, followed by Garcia and Hawks.  Freeman was the overall winner with 2-1 scores, followed by Garcia with 4-2 placing and Hawks taking home the third place trophy with a consistent 3-3 day. 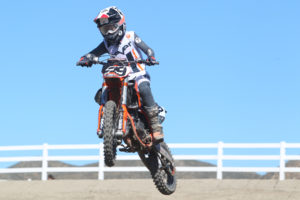 Aidan Zingg was the one to beat in the Supermini class.  Zingg rode strong both motos with respectable leads as the checkered flag flew at the end, showing that the Elsinore main track is no problem for the supermini bikes.  Hudson Zeber was the rider in the runner up position in both motos.  Similar to Zingg, Zeber rode two strong consistent motos to take the second step on the podium for the day with his 2-2 performance.  Third place overall was claimed by Gavin Moon, finishing third in both motos while chasing Zeber.  The top three in the Supermini class were charging hard and all ran consistent pace throughout the races leaving a big gap to the rest of the field. 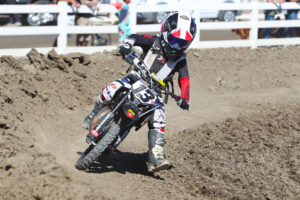 The 50cc 7-8 Years class is always a competitive class, and the Lake Elsinore track really let the riders shine.   Wyatt McCutcheon from Oceanside, CA was able to pin his throttle around the track in both motos to claim a pair of victories in the class.   Shane Smith tried to move his way up to battle the leader, but had his work cut out for him in both motos.   In the first moto, Smith battled with Kolton Wohltman in the early on, but was able to pass for the runner up spot on the second lap.  Once he made the pass, he cut down the gap to the leader McCutcheon a little but ran out of time to catch him.  In the second moto, Smith was back in 4th on the first lap, passed two riders on the second lap and made a charge toward McCutcheon again.  At the finish he was still 2 seconds behind the leader, but made a great charge to run 2-2 for second place behind McCutcheon’s pair of wins.   Wohltman rounded out the day with a pair of hard fought 3rd place finishes to get the third place trophy.