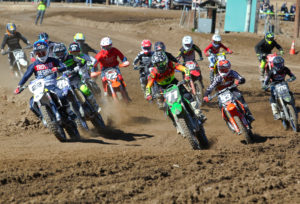 Perris Raceway hosted the second round of the 2022 El’ Dorado Series with well over 700 entries and many big classes filling the starting lines of the two tracks.  The five round series has a healthy start to the season with the next race at a track the Swap Moto Race series hasn’t been to, Lake Elsinore Motocross.  The strong attendance in the first two rounds has brought on many on-track battles which will continue into the next venue.   The air at Perris was filled with the sounds of 50cc motorcycles to the thundering roar of the 450cc four strokes side by side on the track all day long.   The tracks at the Perris facility was perfect when the racers took their first laps in the morning.  You can’t beat the winter weather in the Inland Empire, and raceday was sunny and 70 degrees, but the track crews kept busy making sure the racing surface was in good shape throughout the day. 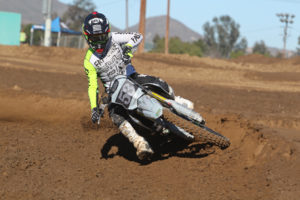 The main track racing started off with the 250 Novice class, always one of the biggest and most competitive classes of the day.   When the gate dropped, Daniel Zapien got was the early leader as they came around for the first lap.  Jack Carrigg was hot on his rear wheel, chasing him down during the second lap.  Carrigg was able to make the pass for the lead and gradually pull away from the field, crossing the finish line with a sizeable margin to Zapien, who crossed over in second place.  Carrigg jumped into the lead in the second moto, but Zapien was on the chase.   During the opening laps, Zapien was able to keep close to leader, not letting him build a gap.   Carrigg did not let up during the entire moto, and as the laps wound down he took the win with a much smaller lead than he did in the first moto, but still claimed the overall with a 1-1 win, followed by Zapien with his 2-2 performance. 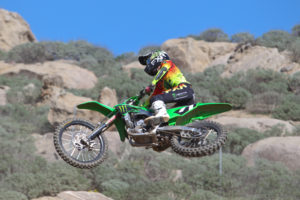 Aden Keefer and Julien Beaumer had a good battle in the 250 Intermediate class.  Keefer claimed the lead at the start of the first moto, while Beaumer was back in the pack on the start.  Through the laps Beaumer made the passes he needed to catch the leader, and halfway through the race he had caught up to Keefer.   The two battled with Beaumer coming out on top and crossing line in first with Keefer close behind.  Beaumer stepped up and took the lead at the start of the second moto, with Keefer in second and putting pressure on first place.  Keefer took the lead on lap 3 and was able to put a small distance between him and second place.  Beaumer was not giving up, and started to make up time to challenge for the lead.  The race finish had a gap of less than .2 seconds between the 1st and 2nd place riders, with Keefer holding on the to lead over Beaumer.   The two racers split wins, with Keefer going 2-1 to edge out Beaumer’s 1-2 placing. 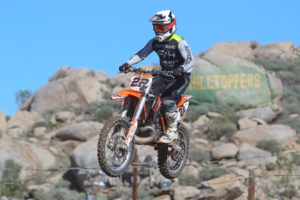 Tyler Sutton had a successful day in the 25+ Beginner class with a pair of moto wins to take the overall victory for Round 2.  He was able to get out to the early lead right out of the gate in both races with only a small lead over Troy Dixon, who was 2-2 in the class.   In the first race, Sutton took the checkered flag with only a small but comfortable margin over Dixon.   The second race was a little easier for him, he got out into the early lead while Dixon was back in the pack in the early part of the race and had to work his way up to the runner up position.   Dixon was able to make up time on the leader, but ran out of time as the laps wound down and could not catch Sutton before the end of the race.