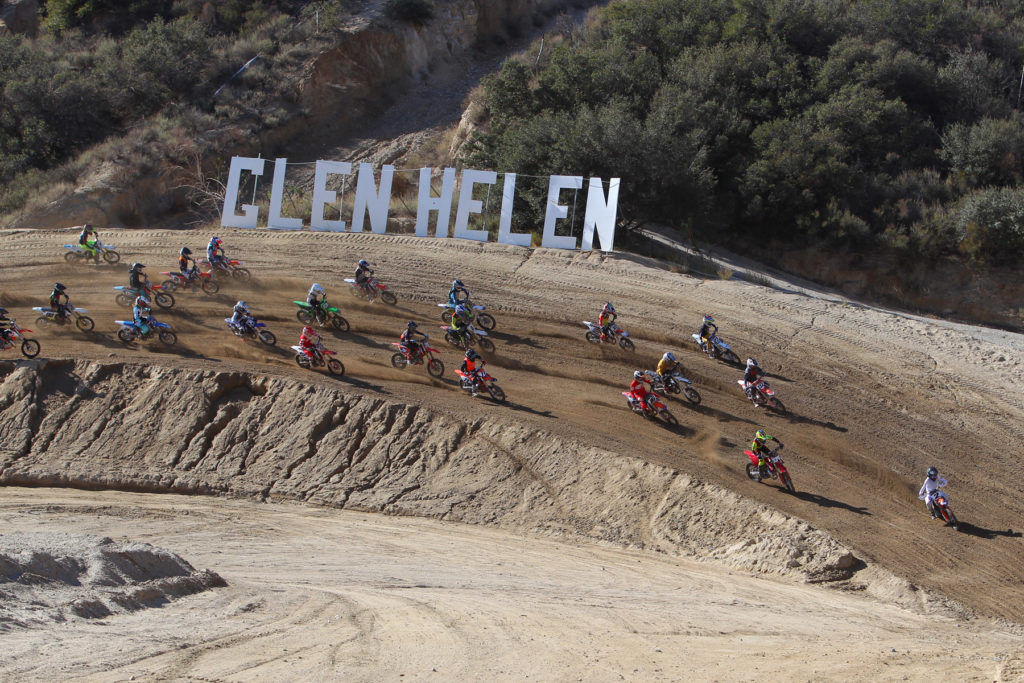 Motocross back and thriving in Southern California as was proven at the opening round of the 2021 Swapmoto El Dorado Race Series at Glen Helen Raceway.  Over 900 entries were tallied between the two tracks with many full gates throughout the day.   The first race of the day was a stacked class of 85-150F/Superminis stormed into Talladega turn, almost reminiscent of the 125 national start from the past.  The opening round for the new year indicates that there will be strong races with competitive battles in every class all year long. 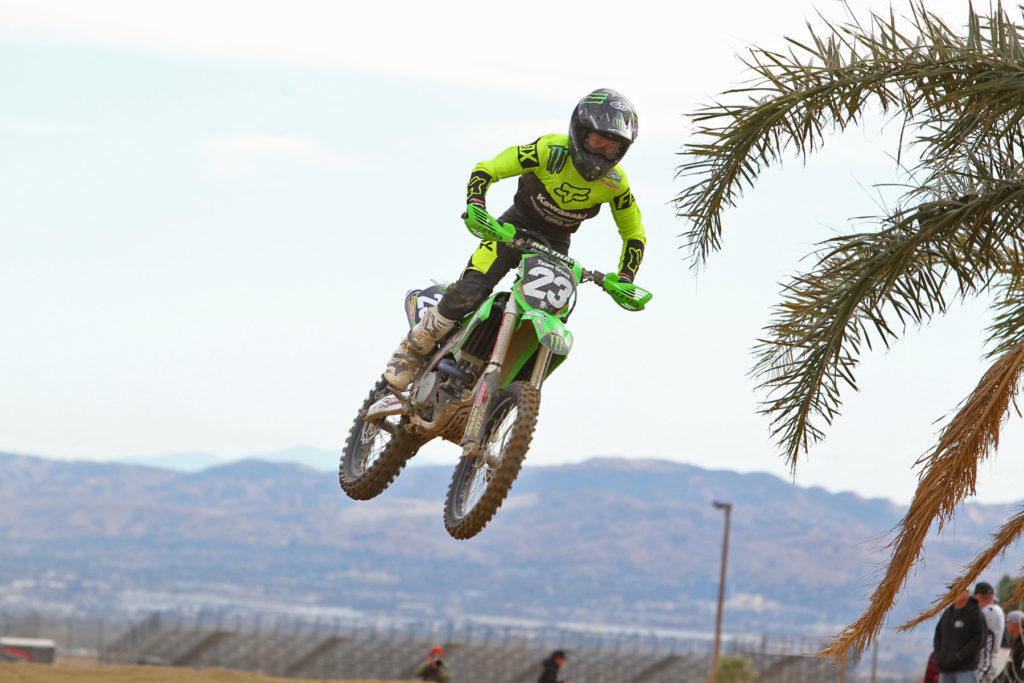 Monster Energy Pro Circuit Team Green racer Ryder DiFrancesco came out to the opening round to sharpen his skills going into the new season.  DiFrancesco put in a commanding 1-1 performance in the 250 Intermediate class.  In the first moto, he got out to the lead on the start, but then had to battle with Husqvarna mounted Brock Bennet and Aiden Keefer on his Honda.  Each of the three held the lead at some point during the race and the top 3 positions swapped several times.  On the last lap, DiFrancesco charged to take the lead at the checkered flag, followed by Bennet and Keefer.   Moto 2 saw DiFrancesco way back in the pack, crossing the line in 11th at the end of the first lap.  By lap 4 he was challenging for the lead which was held by Mark Feneis.  DiFrancesco took the lead on that lap, but the two swapped positions over the next laps, but the Kawasaki rider again crossed the line in first at the end of the race to take the overall win.  Second overall went to Keefer, who rode strong and consistent throughout the day and went 3-3 in this class.  The final podium step went to Bennet with 2-4 finishes. 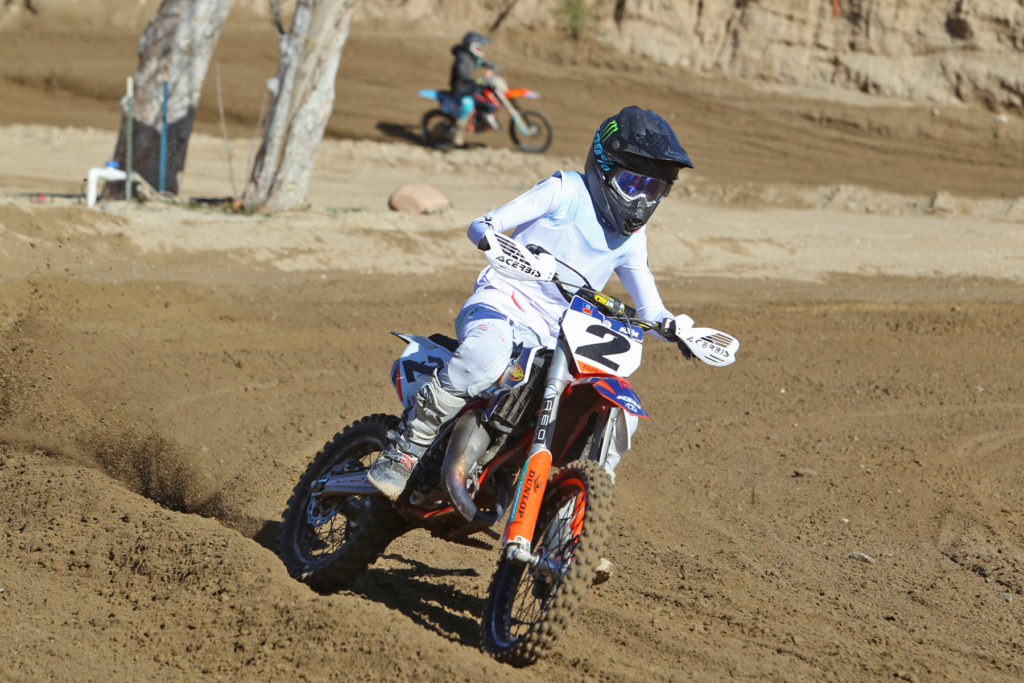 The aforementioned 85-150F/Supermini class is always stacked with action, and this round was no different.  Jeremy Fappani put his KTM into the lead right out of Talladega turn on the start of the first moto, but had challenges from Kane Ewing early on.   Ewing had the lead at the end of the first lap, but Fappani fought back and took the lead on the second lap and was able to hold on to cross the line in the lead.  Leum Oehlhof and Storme Hawks were in the battle with Ewing for the top 3 during the remaining laps, with many passes back and forth between the group.  At the end of the moto Oehlhof was the runner up, Hawks was third while Ewing dropped back to cross the line in 5th place.  The second moto belonged to Fappani, he got out into the lead early and never let off, taking the second win in the class to claim the overall victory.  Kelana Humphrey chased him throughout the race, dropping back to over 5 seconds behind mid-moto, but pushed hard to cath Fappani and gaining back much of the time he had lost.  Oehlhof took 3rd to have 2-3 results to take second overall.   Humphrey salvaged an 8th place in the first moto with a 2nd in the final moto to take 3rd overall. 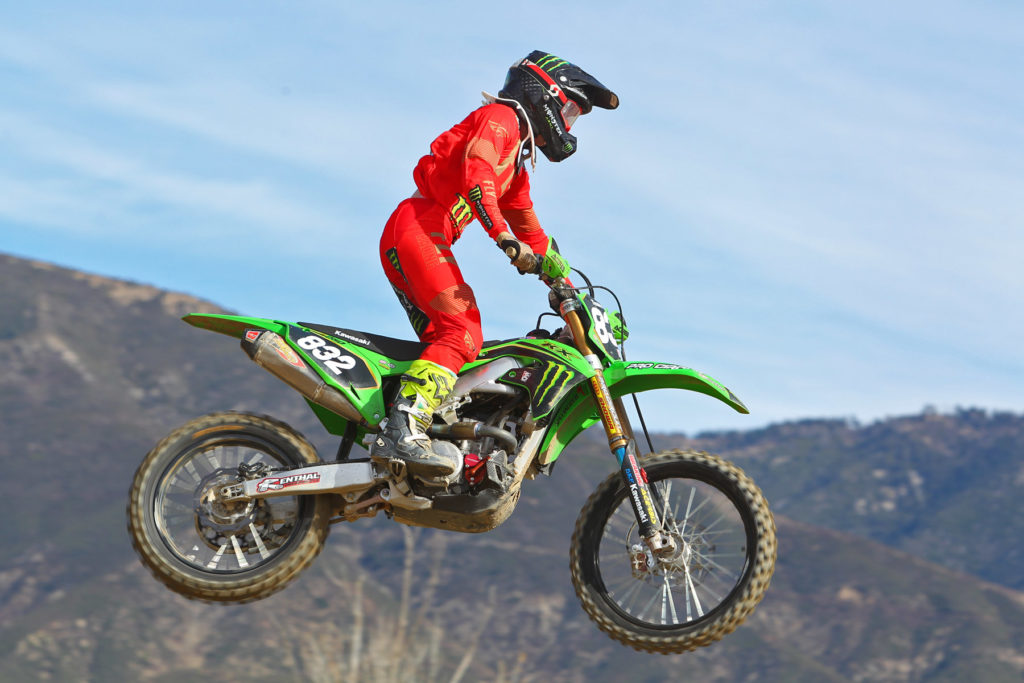 Chance Hymas from Pocatello, ID split wins with Honda rider Hunter Yoder in the 250 Pro class.  In the first moto, Hymas went flag to flag in the lead to take the first win of the day, followed by Cole Baily on his KTM.  Hymas took a commanding win over 2nd place when he crossed the finish line.   When the gate dropped for moto 2, Hunter Yoder came back with a vengeance to try to claim the second moto win.   In the early laps, he had a few seconds of gap over second place Hymas.  As the laps wore on, Hymas began to catch up, shrinking the margin every lap.  By lap 6, he was putting pressure on Yoder with less than a second separating the two.   In the final two laps, Hymas worked hard to catch Yoder, but ran out of time as Yoder crossed the line under checkered flag in first place.   Hymas was still able to take the overall win with 1-2 finishes, edging out Yoder with his 3-1 performance.

If everyone visits the link in our profile you’ll see an opportunity to purchase your my laps transponder. With this transponder it would allow us to run a smooth program with no line because you would go straight to the gate for Racing. We could even release the schedule prior to race day. It’s a great idea to pick up your own transponder. Thanks for everyone’s patience as we have a record number event.
@swapmotolive
@amsoilinc
@thormxofficial
@asvinventions
@yamahamotorusa
@throttle_syndicate
@odigrips
@xbrandgoggles
@zingginc
@actionsportscanopies
@ireniccbd
@6dhelmets
@customupfits
@flowvisioncompany
@renegadefuel
#swapmotoraceseries
#eldoradoseries
#cmxrs