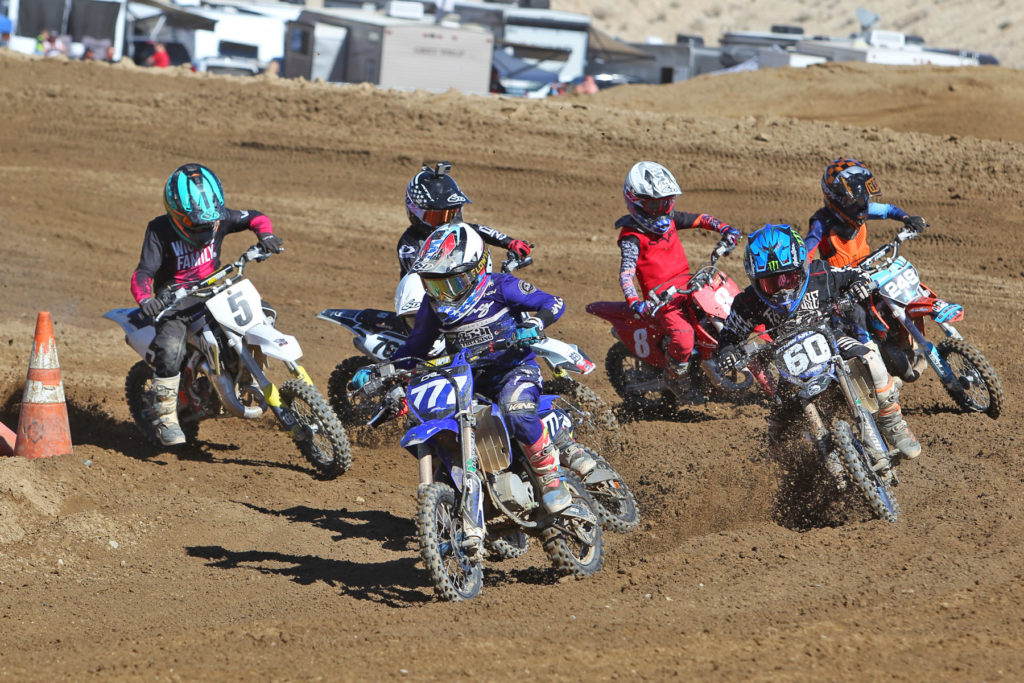 The El Dorado Series passed the halfway point as LA County Raceway hosted the third round of the series.   The series has had record numbers of entries and this round kept the trend of full gates and competitive racing alive.  LACR has always been a favorite for the riders as the faster speeds combined with bigger jumps on both tracks keep the adrenaline flowing throughout the lap as well as offering many passing opportunities.   Series championships are beginning to take shape as the final two rounds at Glen Helen Raceway and State Fair MX are fast approaching. 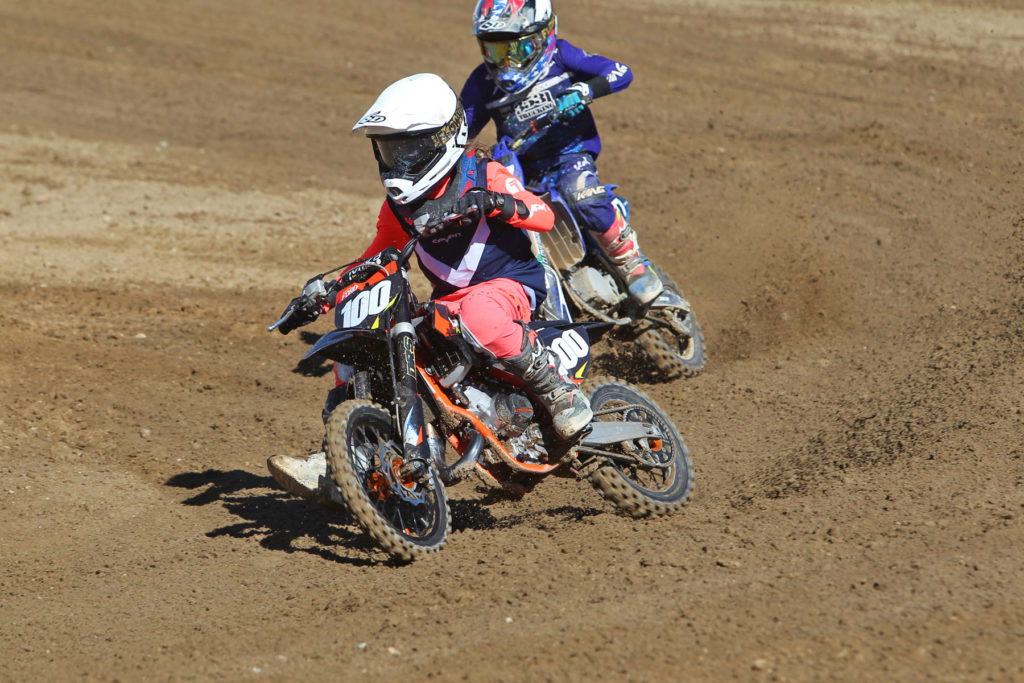 Mathew Cruz and Nolan Ford had a battle right at the start of the Open 65 class as they were side by side off the start.   Cruz crossed the line in first at the end of the first lap with Ford right behind him.  It was still a tight race after the first lap, but Ford was able to make the pass on lap two.   Once he had an open track ahead, Ford twisted the throttle and slowly pulled away from the field, crossing the line 7 seconds ahead of Cruz in second while Michael England came in third.  When the gate dropped for the second moto, Cruz shot out into the lead early, putting an ever increasing gap on the field.  There was a tight battle for the second position as Cruz and England were battling and swapping positions in the middle of the race  At the end of the race, the time to second was 9 seconds, with England crossing the line in second, followed by Cruz.  This gave Ford the 1-1 overall win, with England second with 3-2 and Cruz taking third with 2-3 finishes. 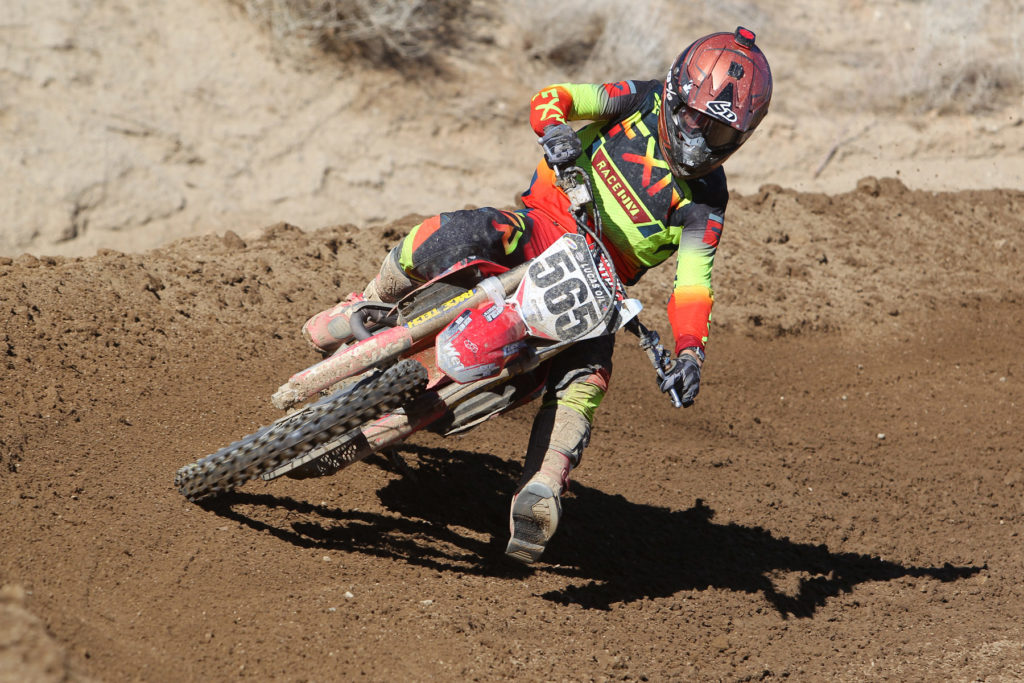 The 450 Pro class thundered onto the track with Dominic Desimone grabbing the early lead after the start, followed by Dustin Pulliam and Desmond Spears.  The race for second place between Pulliam and Spears was tight early on, with Spears taking over during the second lap and try to catch leader Desimone.  By this time, Desimone had a big lead and Spears was unable to catch him as the race ended, giving Desimone the win, followed by Spears and Pulliam. 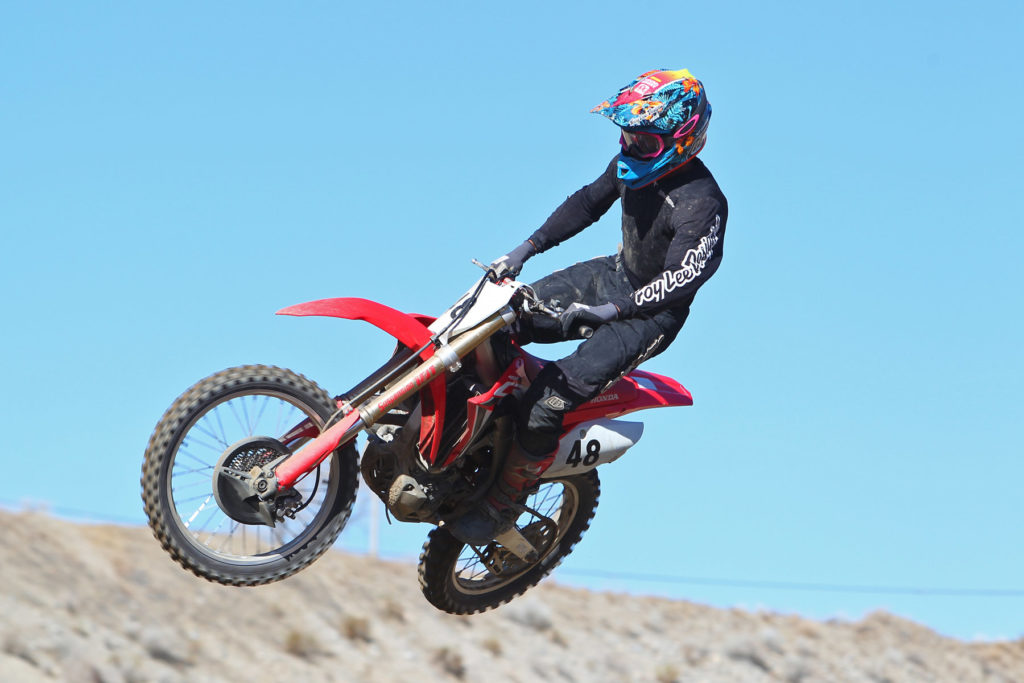 When the gate dropped for 450 Pro moto two, Pulliam grabbed the early lead, followed by Shane Emerson and Spears.  Pulliam held the lead in the early laps while Spears and Emerson were battling for second.  Spears took over the second position on the second lap and made a charge for Pulliam who only had about a 1 second cushion.  On lap 5, Spears made the pass on Pulliam and kept charging with a clear track ahead of him.  At the checkered flag, Spears had a 9 second margin over second place Pulliam.  Spears took the victory with 2-1 finishes, Pulliam claimed second place with 3-2 and Emerson was in third place for the day with 5-3. 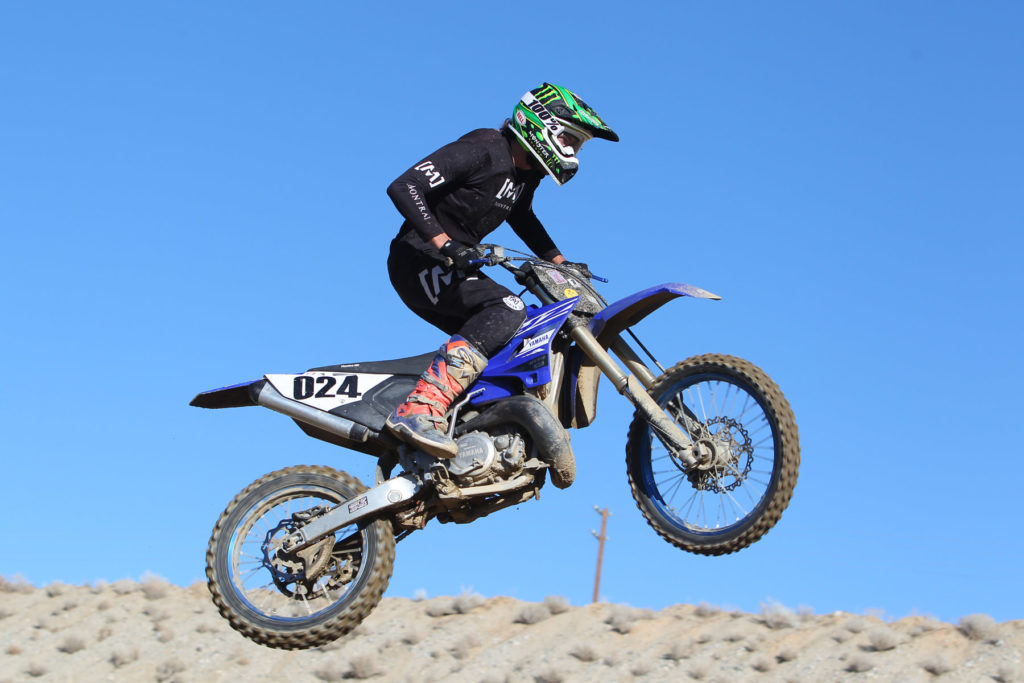 Jack Shaver leaping to victory in the 250F Beginner class

Jack Shaver had a flag to flag win in the first moto of the 250F Beginner class.  He was able to get out in front right off the gate and pull away from the field to take the win.  Tyler Den Hartog had a battle with Teagan Whalen early on and then Bryan Ballin in later laps for the runner up position in the first race.  Den Hartog was able to keep the challengers at bay and cross the line in second place while Whalen held on to third place.  In the second moto, Shaver again got an early lead but was chased closely by Bryan Ballin throughout the race.  As the laps wound down, Ballin was determined to catch the leader, and his patience was paid off with a final lap pass for the second moto win, followed close by Shaver.  Whalen rode a solid race holding third place from start to finish.  Shaver was the winner of the day with a win and a runner up postion, Whalen in second with a consistent 3-3 day, while Angel Garcia was third overall with 6-4 finishes.

@ridestacyc GROMCROSS is today @glenhelenraceway ! Check-in starts at noon. Practice starts at 3 PM. Even if you pre-register don’t forget to go by registration to pick up your number plate. It’s going to be awesome! The 215 freeway at the 60 freeway had some major construction going on this weekend so check for alternate routes. ...

@6dhelmets has been dedicated to the relentless pursuit of brain protection and has spent over a decade pioneering safety advancements in helmets. Check out the 2021 Spring collection by visiting your local dealer or www.6dhelmets.com. We are proud to have 6D as a sponsor of the Swapmoto Race Series. #6dhelmets #suspensionforyourhead ...