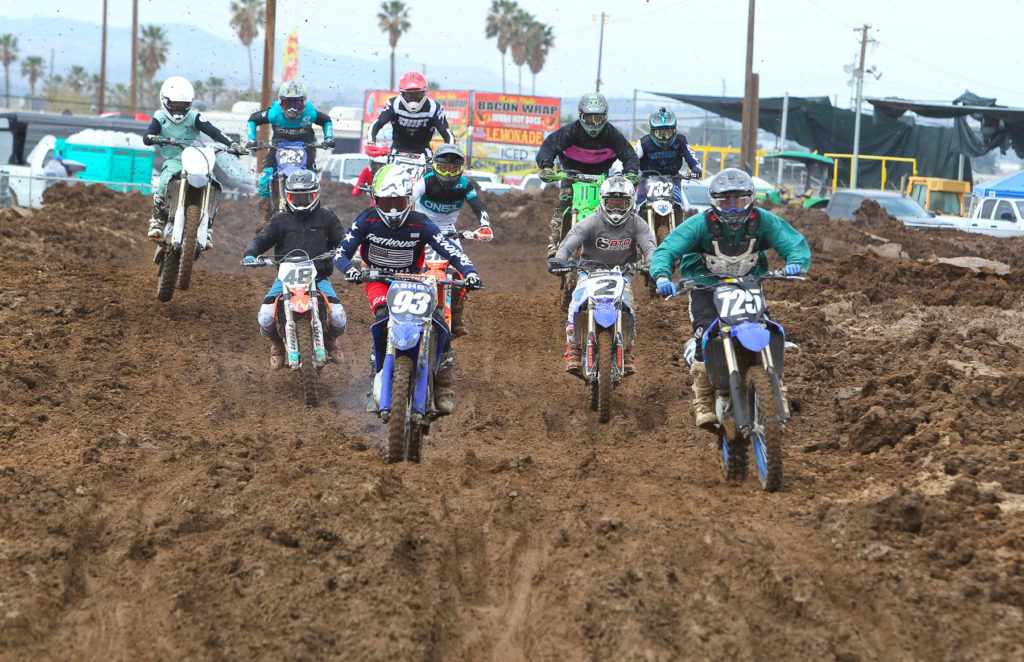 The final round of the El Dorado Series was thrown a curve ball when rain hit just prior to the event, making it a rare mud race in Southern California.  The original plan was to split the race schedule over two days, but the weather intervened and the Saturday schedule had to be moved to Sunday.  The track conditions on Saturday morning left the track crew with little time to clean up the track surface, but the extra day gave them the needed hours to prepare the tracks for the full schedule of racing.   The entire track crew did a tremendous amount of work and when the gates dropped for the first motos, both tracks had good racing lines and got better as the day progressed.  Both the amateur and main tracks had full schedules to close a record breaking series for attendance.  At the end of the day, a great day of competition with lots of stories for future bench racing sessions. 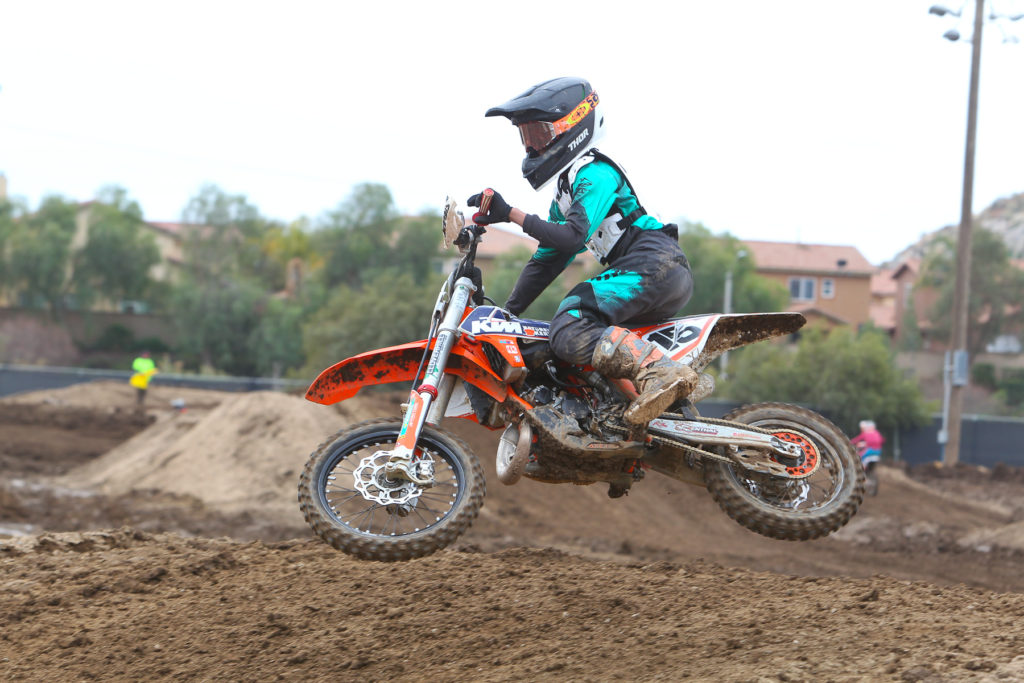 The 85/150F Open was the first class of the day to charge off the starting line, and Mason Hibner wasted no time making his way to the front of the pack.   Keeyan Majors was in pursuit early, but dropped back in the pack after the first 2 laps.  Ethan Waddle took his place behind Hibner, but was unable to close the big gap Hibner had on the field, and Carson Millikan crossed the line in third place.  By the second moto, more lines had developed on the track but ruts had gotten deeper making the track tough on the smaller wheel bikes.  KTM mounted Millikan took the lead from the start in the second moto, with Waddle in second followed by Hibner.   With no one in front, Millikan sprinted out in front leaving the battle between Hibner and Waddle behind him.  The two swapped positions for second place over the next few laps, but Hibner was able to take the second position and hold on to it, leaving Waddle to battle Majors for the third place.  When the checkered flag was thrown, Millikan took the win, followed by Hibner and Majors.  The overall win for the day went the Hibner with his 1-2 performance, second belonged to Millikan with 3-1 and the final podium position went to Waddle for his 2-4 performance. 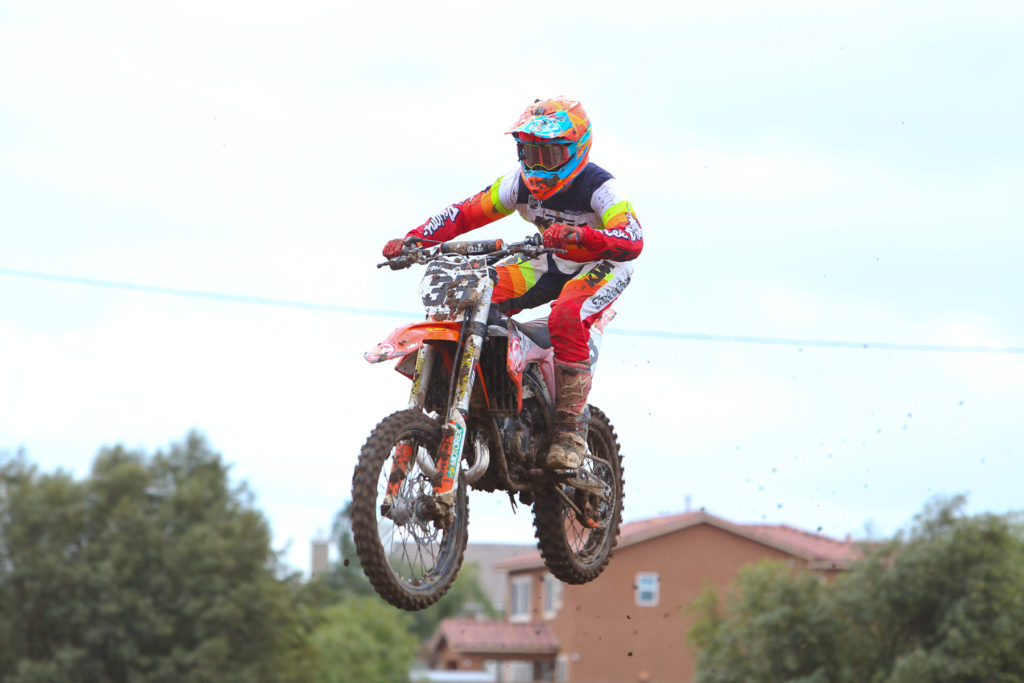 Dane Morales put his ASV Inventions sponsored KTM at the top of the very competitive Novice 250 class with a dominant 1-1 performance on his 2 stroke.  In the second moto, Del Toro had his hands full fighting off the charges from Landon Paras, the two swapping their positions for a few laps, but Del Toro had the advantage at the finish.  The results of the top 3 of the day in the class showed that consistency pays off with the 2nd place going to Peter Del Toro placing 2nd in both motos, while third overall was claimed by Cameron Jones with 4-4 positions. 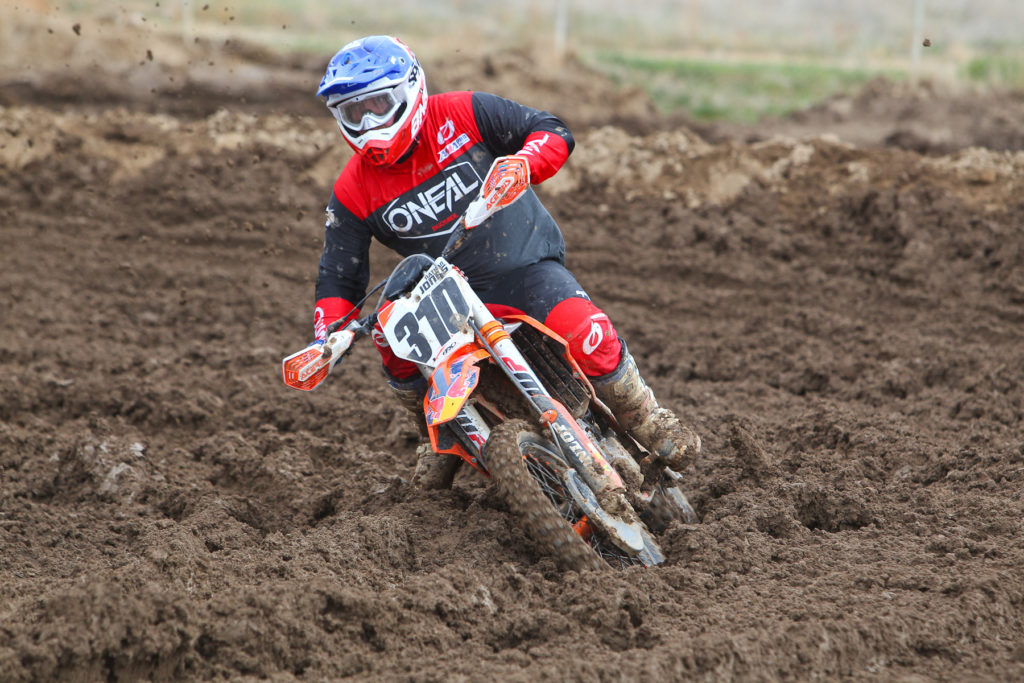 The 30+ Intermediate class was one of the first races of the day, and they helped carve in the race lines on the track in the soft sections.   Nathan Jones worked on carving those ruts as he led the first moto.  AJ Lee was on his rear fender early in the race, but wasn’t able to keep pace through the middle laps.   Scott Schrader rode the track in a lonesome third place with a gap to second and the fourth place rider well behind him.   The end of the first moto had the finishing order of Jones, Lee and Schrader with about a 15 second gap between each of them as the deep track conditions kept them separated.  The second moto was very similar for Jones, who had a flag to flag win again with the 15 second gap to second.  However, the race was for second place as Lee and Schrader battled for the second place on the podium.   Lee had the second position after the first lap, but gave it up to Schrader the following lap.  Schrader was able to hold off the challenge from Lee for three laps, but as the race wore on they again exchanged positions.   Lee held on to second place for the closing laps, keeping Schrader in a close third place.  Lee was on top of the podium with his pair of victories, Lee was second overall with two second place finishes and Schrader held on for third for the day to match his moto placings.