Most of you know who Evan Ferry is by now. The Florida teenager has made a name for himself through wins on the amateur motocross circuit, a booming presence on social media, and well-deserved factory support. But as much as we’ve seen “Little Red Dog” rip, we’ve only had a few one-on-one conversations with him, and always during busy times like Loretta’s or the Monster Energy Cup.

It’s been an eventful year for Ferry. A few weeks back, he and Rockstar Energy Husqvarna Factory Racing mutually agreed to end their contract, a surprise development that made the rider a free agent during the qualifying process for Loretta’s. In the weeks that followed, Ferry bought a YZ250F, lined up for a few local races, did a tryout with Star Racing, and then signed with the NSA Yamaha Factory AM Team.

The changes provoked plenty of discussions, with conflicting reports online from “those in the know” about what happened and why. With that, we linked with Evan to talk about everything, from his earliest MX memories to the path he’s currently on. To say that he is a student of the game would be an understatement. Life at the track has allowed him to watch the sport’s best, study their techniques, learn the motorcycle, and see what it takes to reach the top. During the talk, Evan pointed out that the family has tried to maintain a balance of fun and work, but the feeling that comes from winning is still what drives him most.

Jalek Swoll on the SML Show 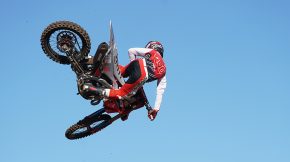