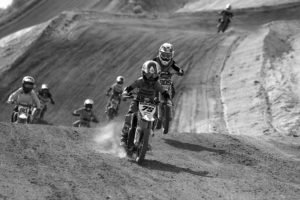 Round two of the AMSOIL Fall Classic race series is officially in the books, as racing went off this past weekend at Los Angeles County Raceway and man it was another fun one! The cool temperatures seemed to appeal Southern Californian racers, as well over 400 riders joined us in the Palmdale, CA sandpit. The track crew prepped both fast, sandy courses to perfection, making for some exciting racing throughout the raceday. As the dust settled, over 400 riders left LACR with smiles on their faces, as they were able to enjoy a day throwing down laps and doing battle. 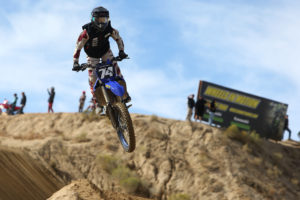 After missing the AMSOIL Fall Classic series opener a few weeks back, Swapmoto Race Series regular Peyton Marks made his series debut at LACR for the second round. It tends to be pretty easy for us to spot which races the B-class racer attends, as he’s usually at the front of the pack on his number-74 Yamaha. Well, round two of the Fall Classic was no different, as Peyton jumped past our camera leading all six of the moto’s he contended in. Peyton Marks left LACR having earned the overall win in both Intermediate 250F and 450F classes, as well as the School Boy (125/250F) class. 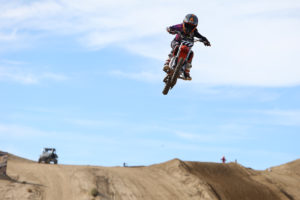 Whoever thinks kid’s don’t hit big jumps certainly hasn’t seen Matthew Cruz. The youngster that has become a familiar face at the AMSOIL Swapmoto race series is constantly impressing us by hitting the biggest jumps on the track. Now on a KTM 65SX, Matthew Cruz was one of the only youngsters in the 65cc class sending it off of a few larger tabletops and doubles on LACR’s main track. Though, Matthew backed up his big-air with some fast lap times and took home the win in each moto he lined up for. After dominating in both the 9-11 years 65cc and 8-11 years 85-150F classes, we’re anxious to see what Matthew Cruz can do in a few weeks at the Mini Major West!