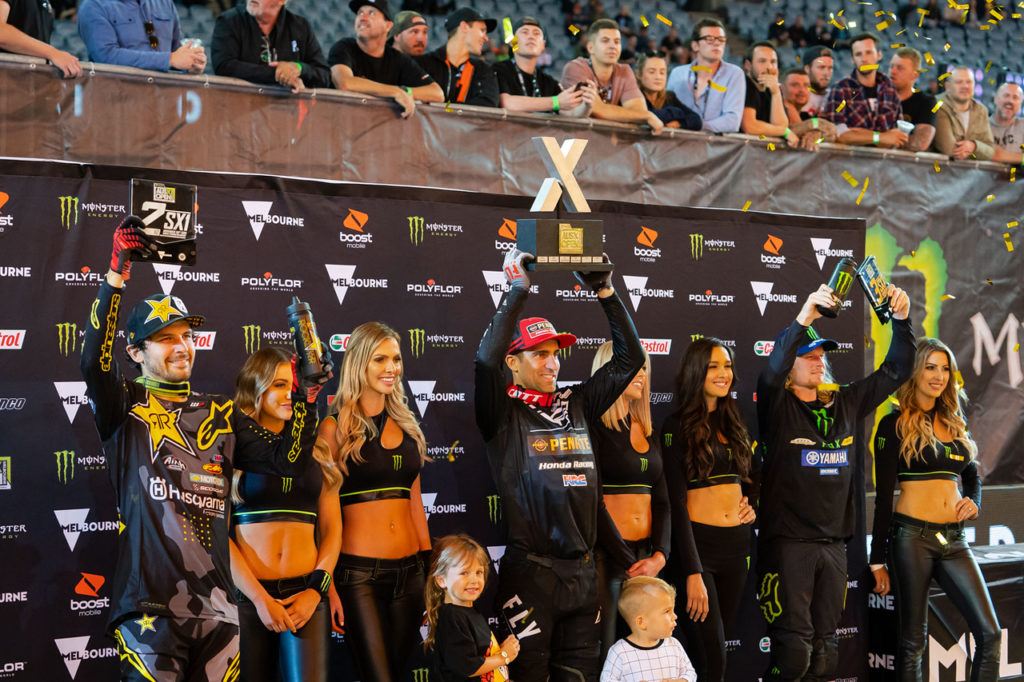 Details about the FIM World Supercross Championship continue to come out, as SX Global recently announced the race format that will be implemented for 2022’s pilot season will include Heat Races, three Main Events for the SX1 and SX2 divisions, plus a Superpole time trial for the top finishers in SX1 Heat Races.

The non-traditional format features more races and shorter race durations, significantly increasing the overall level of action and excitement, while minimizing downtime for fans throughout events. Highlighting the competitive format are three Main Event races for each class, with the combined individual results of each Main Event determining each Championship Round winner for both the WSX and SX2 classes. The three, back-to-back Main Event format and shorter race durations significantly increases the overall level of intensity and unpredictability at every Championship round and makes getting effective starts and hole shots all the more critical. Much of this format has been tested successfully at SX Global-produced AUS-X Open events, with incredibly positive feedback from riders and fans alike.”

In addition, the WSX class will feature a Superpole round – an individual time trial format, featuring the top-10 WSX heat race finishers, to determine the order for the Main Event races. Combined with adjacent entertainment, including live music and freestyle motocross exhibitions, the unique format translates into an unparalleled level of entertainment for fans at every WSX Championship round.

“In everything we do with the WSX Championship, our aim is to take what’s best about supercross and expand on that with innovative ideas that address areas where the sport can be even better, and this competitive format is a prime example of that,” said Adam Bailey, managing director – Motorsport of SX Global. “As we drive a dynamic global future for supercross, the fan experience has to be central to everything. Having more races ensures fans will enjoy significantly more action from their favorite riders over the course of an event, while shorter race formats increase the overall level of drama and excitement through tighter, action-packed battles and minimal downtime over the course of the evening.

The competitive format at WSX Championship rounds breaks down as follows:

WSX and SX2 fields will each be split into two separate timed qualifying sessions, with individual lap times determining the order for each class’ heat races. Each qualifying session will last 10 minutes, with final laps run to completion once the 10-minute session expires.

WSX class heat races will determine the order for the Super Pole – a time-trial format exclusive to the WSX class that will determine the order of its Main Event round. The top five finishers in each of the two WSX heat races will earn a spot in the 10-rider Super Pole. The sixth to 11th place finishers in each heat will fill spots 11-22 in the gate pick order for the main event, with the faster overall heat taking precedent and gate picks alternating between the remaining riders.

For the SX2 class, in the same manner as with traditional supercross formats, heat races will determine the order for the main event. Collectively, the faster overall heat will take precedent, with gate pick choice for the Main Event alternating between the finishing order of the two SX2 heats.

Each WSX Championship round will see riders contest three ‘back-to-back’ Main Event races for each class, with only a short 5-minute break between each. The combined individual results determining the winner and podium spots for each Championship Round.

FIM World Supercross Championship points will be awarded for each of the three Main Event races. Points will follow the traditional supercross format of 25, 22 and 20, 18 and 16 points respectively for first through fifth place, with the remaining 17 riders earning from 15 points to 1 point, depending on where they finish. It total, a maximum of 75 FIM World Championship Points are up for grabs at each WSX Championship round.

In addition to the Main Event races, the fastest SX2 qualifier and the winner of the WSX Superpole will be awarded one additional Championship point.

As with traditional supercross event formats, practice sessions will take place during afternoons for the enjoyment of fans who arrive earlier and want to enjoy as much action as possible. 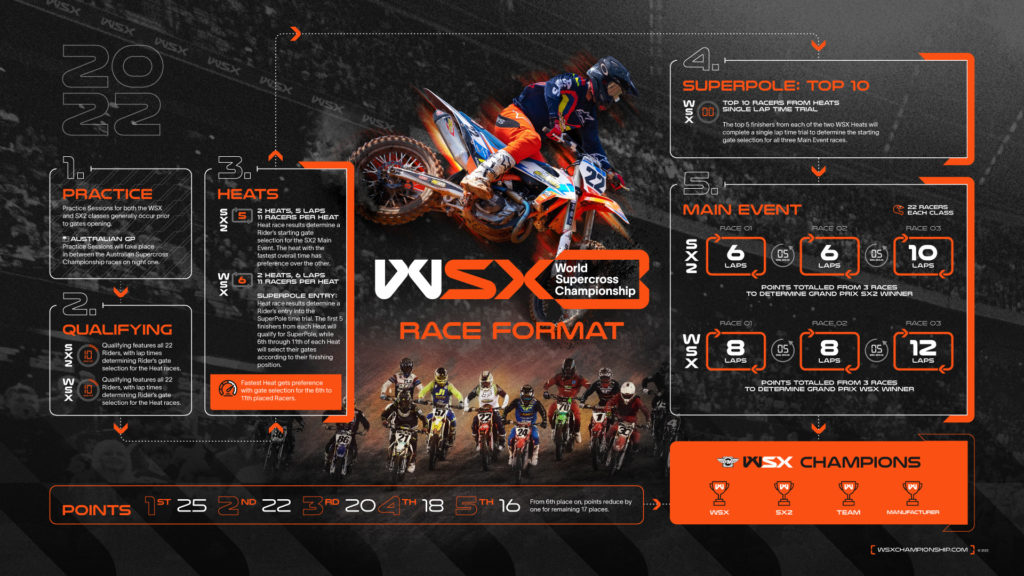 Previous Article
Checking in with Marvin Musquin
Next Article
Kid Gifted a New, Safer Helmet on His First-Ever Track Day!

Adam Bailey Looks Back On Year One Of World Supercross
Michael Antonovich December 19, 2022

Adam Bailey Looks Back On Year One Of World Supercross

2022 WSX Australian GP | How Was Your Weekend