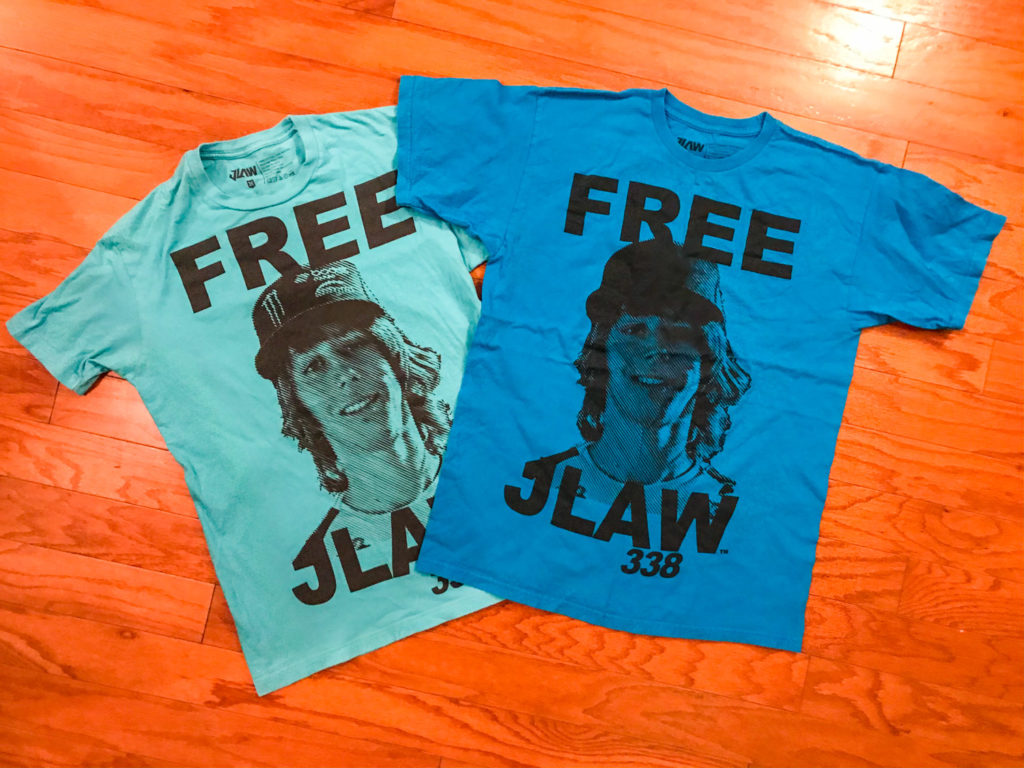 Has there ever been a racer as polarizing as Jason Lawrence? From the moment the New Jersey racer showed up on the pro scene in 2005, there was a sense of uncertainty as to what he would do and as a result, damn near everyone in the industry has a story about him. Pit bike motos through residential neighborhoods while running from cops (allegedly), the Ryan Villopoto Hangtown fight, a love for Otterpops, banging on the starter’s doghouse to rattle other racers, his longstanding feud with Ryan Dungey that led to the “1W” burnout on a concrete pad at the Suzuki Supercross track, online video game battles with fans, donations to the Mobile Medical Unit and Danny Magoo Chandler, wild nights before a race (allegedly), quote-worthy interviews, a refusal to wear anything but red gloves, a different telephone number every few weeks, lending Tyler Wharton parts at a race, custom painted helmets, Texas rental car, drawing targets on his ankles at the 2009 Mini Moto Supercross in Las Vegas, winning the 250 West Coast Supercross title, almost winning Daytona after a wild first turn, fast laps on a 450, a short stint in jail, numerous rumored comebacks, and finally, his current remote location somewhere in the country that only a few know about. Seriously, we could start an entire segment of the site dedicated to “Tell Us A JLaw Story” but most are not suitable for print and can only be heard around bars during bench race sessions.

2009 was the most eventful year of Lawrence’s career, as he was the defending 250 West Coast champion and had reshaped the Yamaha of Troy program into his own personal team with a slew of outside the industry sponsors (ampm convenience stores, 2XL-Skullcandy headphones, Boost Mobile) and Nick Wey as a 450 class rider. Things started off well, with 5-4 finishes at the first two rounds, until things went off the rails after an incident with Josh Hansen and Steve Boniface at the San Francisco Supercross violated Lawrence’s probation from the prior summer and resulted in a two-race suspension. With no chance at defending the number one plate, Lawrence turned his attention to the 450 class and added another top-10 to an already competitive field. But, in true JLaw style, he was soon in a controversy after he torpedoed Broc Hepler in practice at the Jacksonville Supercross and was banned from the final SX races of the season (the takeout and crash basically marked the end to Hepler’s pro motocross career). Lawrence’s agent at the time, Scott Sepkovic, took the “all press is good press” angle and had a run of “Free JLaw” shirts printed and sold by the time the series headed to Las Vegas for the final round of the season. The darker blue shirt is part of the original run, which my younger brother Kyle and I bought online. 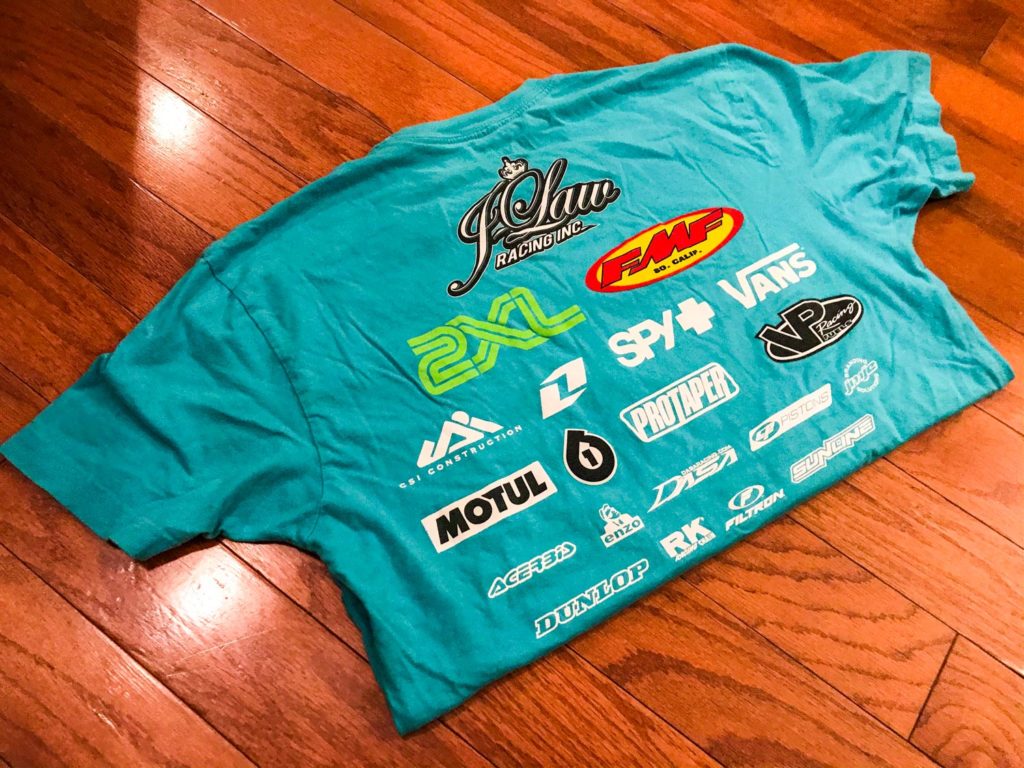 Things took a sharper turn later in the year, as Lawrence was sentenced to a prison bid for an incident with a friend and did four months in a Southern California jail. While he was away, Team Manager Chris “Dang” McAvoy did his best to keep the racing operation going and Nick Wey raced the US Open that October aboard one of the team’s YZ450F bikes. Since Lawrence was locked up, the “Free JLaw” message took on a new meaning and the team uniform for the weekend was a green-blue T-shirt with Lawrence’s face on the front and all of the sponsors on the back. Team shirt to support a controversial figure in lock up? Talk about a power move. Dang and I had gotten to know each other during the year, mostly because I followed Donn like a shadow/was the annoying teenager of the paddock, and he knew how much Kyle idolized Lawrence (that’s a story for another time). At some point in the weekend, he passed two of the shirts my way.

We knew the shirts were going to be a coveted piece of memorabilia, so my brother and I only wore them a few times and put them away. Kyle posted it online one time and was flooded with offers to buy it for hundreds of dollars, but wisely kept it. There are probably less than three dozen of these in the world and with every “will Jason come back” post on the message boards that reminds us if wild persona, they become a little bit more remarkable. 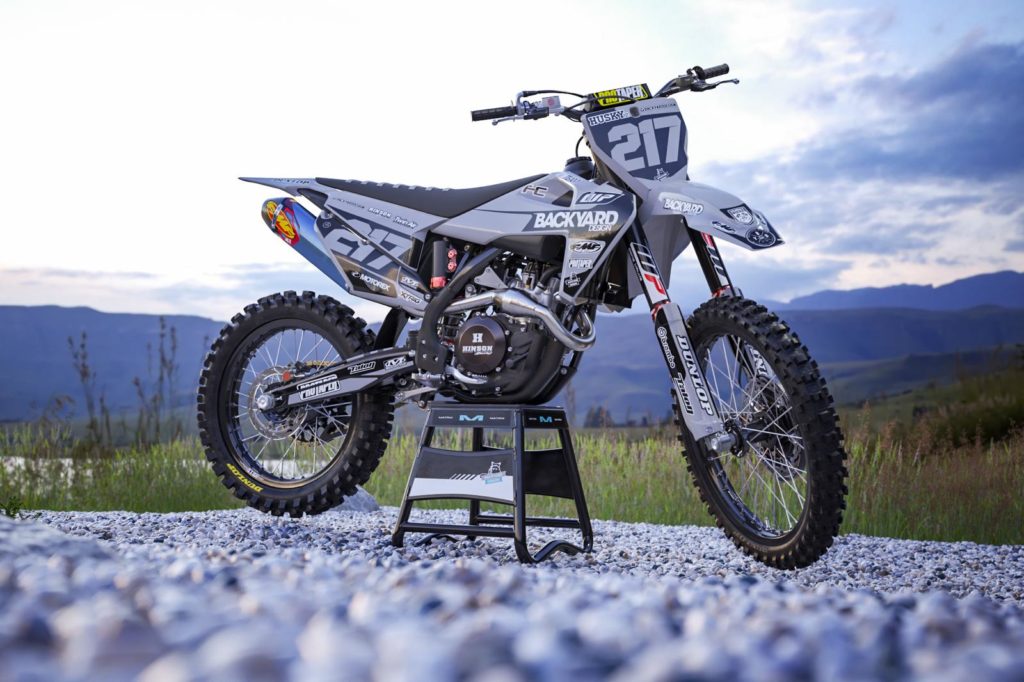 Gray plastic goes hard. White plastics have been around forever and are prone to staining, while all black bikes conjure up ideas of stolen bikes or poorly cut grab holes inspired by the Crusty Demons videos. But gray is something all its own with a look that is modern, eye-catching, and can be matched to a wide variety of colors. Of course, the guys at Backyard Design have figured out a template and color palette that looks good on any bike, like the Husqvarna shown here. With the winter months upon us, now is a great time to give your bike a facelift with new body panels and fresh graphics to match.