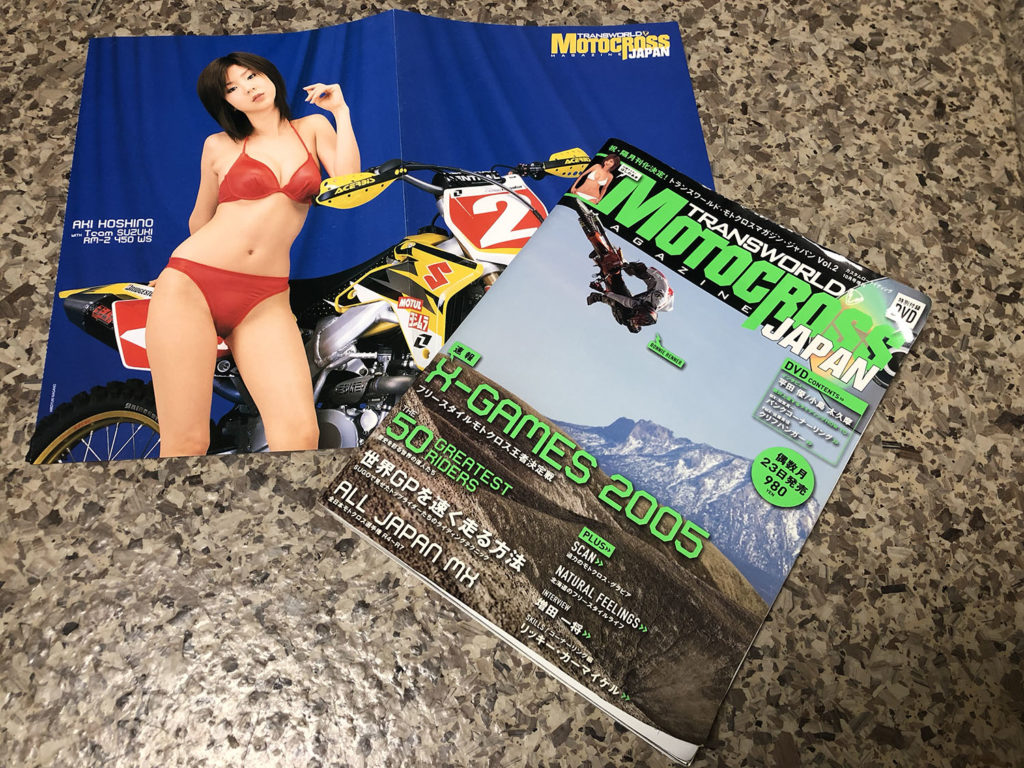 Back in 2005, five years after launching TransWorld Motocross with my buddy Garth Milan, our parent company Times Mirror Magazines was approached by a publisher in Japan about licensing some of our content and producing TransWorld Motocross Japan. Apparently, there was already a very successful Japanese version of TransWorld Skateboarding, and motocross was next on their wish list. This came as quite a surprise, as not only is motocross very small in Japan, but the country already had at least three off-road motorcycle magazines that were well established: Dirt Cool, Garrrr, and Dirt Sports. Dirt Cool had always been one of my favorite magazines through the years, and when I launched MXracer Magazine back in ’97 I drew plenty of inspiration from the art direction and layout of Dirt Cool. I was happy to have become friends with Dirt Cool’s publisher Shintaro Urashima, and his renowned photographer Naoyuki Shibata. That said, I was apprehensive about the agreement because I didn’t want my friends to think I was trying to compete with them. 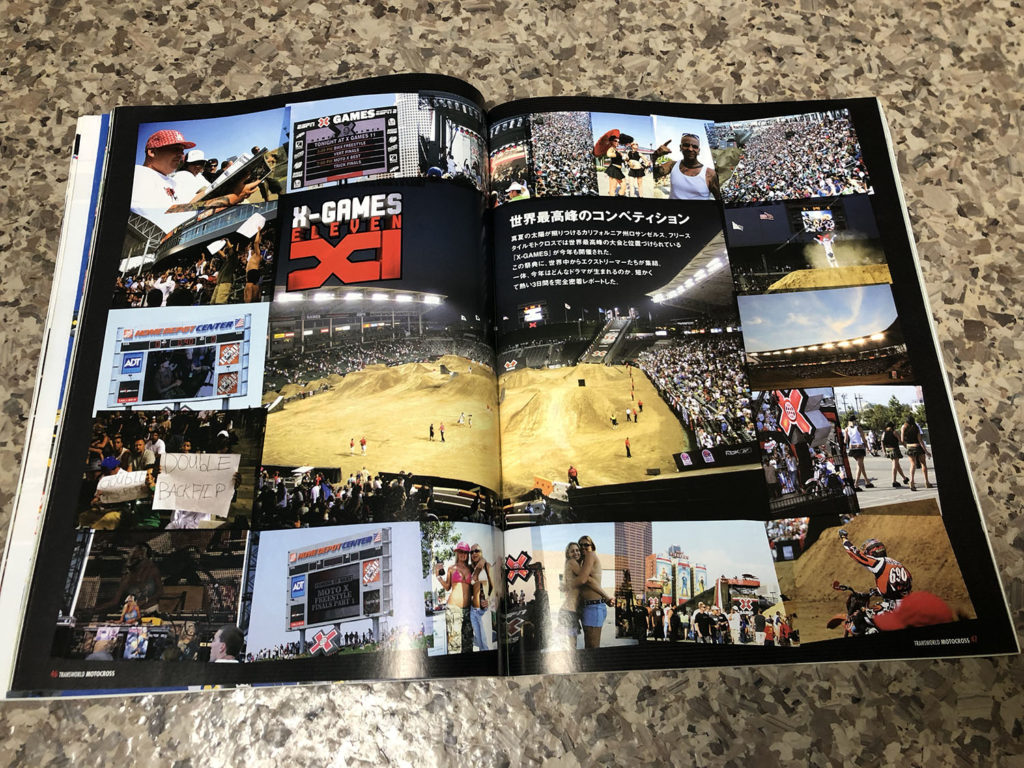 As was the case with many money-making opportunities presented to the corporate bosses, the decision was made to go ahead even though I objected. Each month, we would send the publishers of TransWorld Motocross Japan our magazine layout files for them to translate into Japanese and layout in their own style. Most magazines in Japan are larger format than American magazines, so the finished products were really nice quality. Truth be told, it was always cool to see something you created show up in a different language and laid out just a little differently. All told, each magazine was about 60% translated content from us, and about 40% original content covering the Japanese motocross scene. The editor would maintain our same style and department ideas, but feature domestic riders instead. 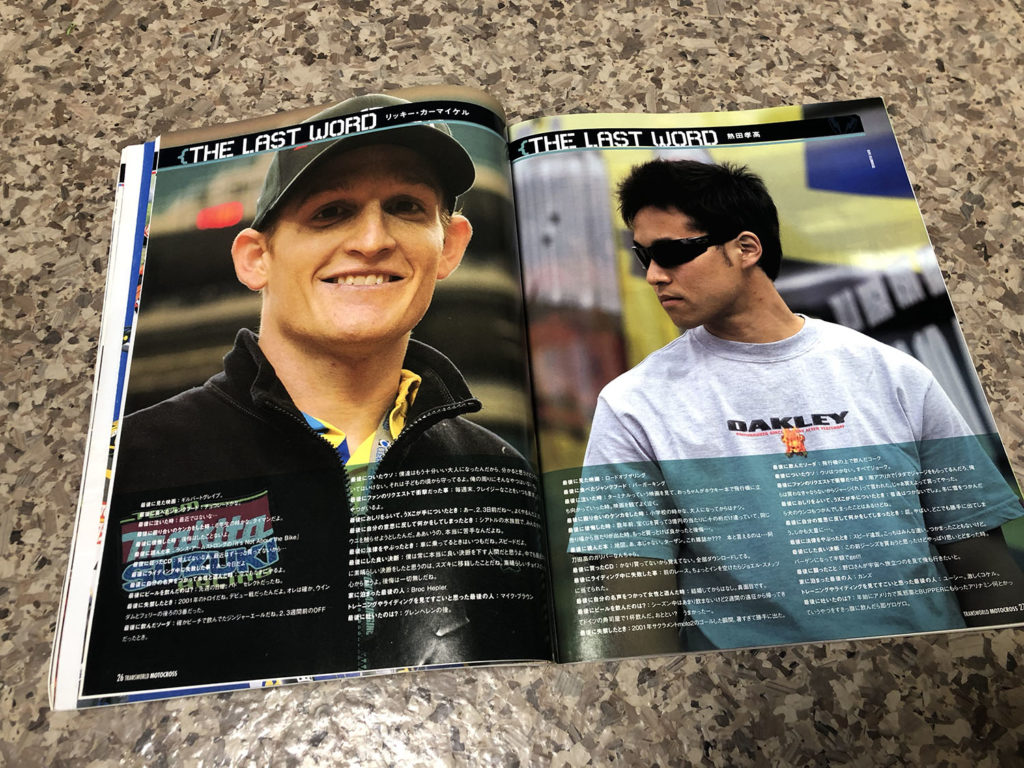 My personal favorite parts of the magazine were when they would use a page that we created with an American racer (like RC, pictured above), and mimic the questions with a star of the All Japan MX Championship (like, Yoshi Atsuta, pictured above). One thing that always puzzled me, though, was how they always shot their own pinup posters instead of using ours. 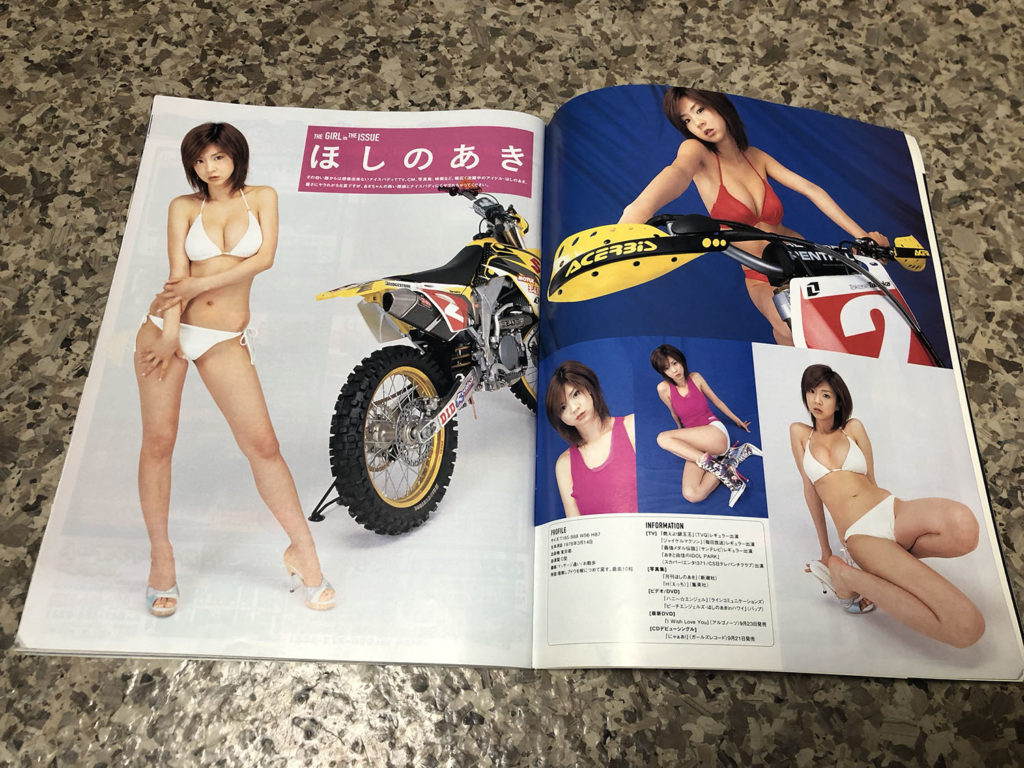 The TransWorld Motocross Japan editors took the pinup section very seriously, and included a whole spread inside the magazine highlighting each month’s model. I often wondered about the poses, though…Haha!

When I visited Tokyo in 2005 before the All Japan National Championship Series opener, I dropped by the TWMXJ offices to meet the staff. They were nice enough guys, but the language barrier was so tough to overcome that I wondered how they translated our magazine at all. 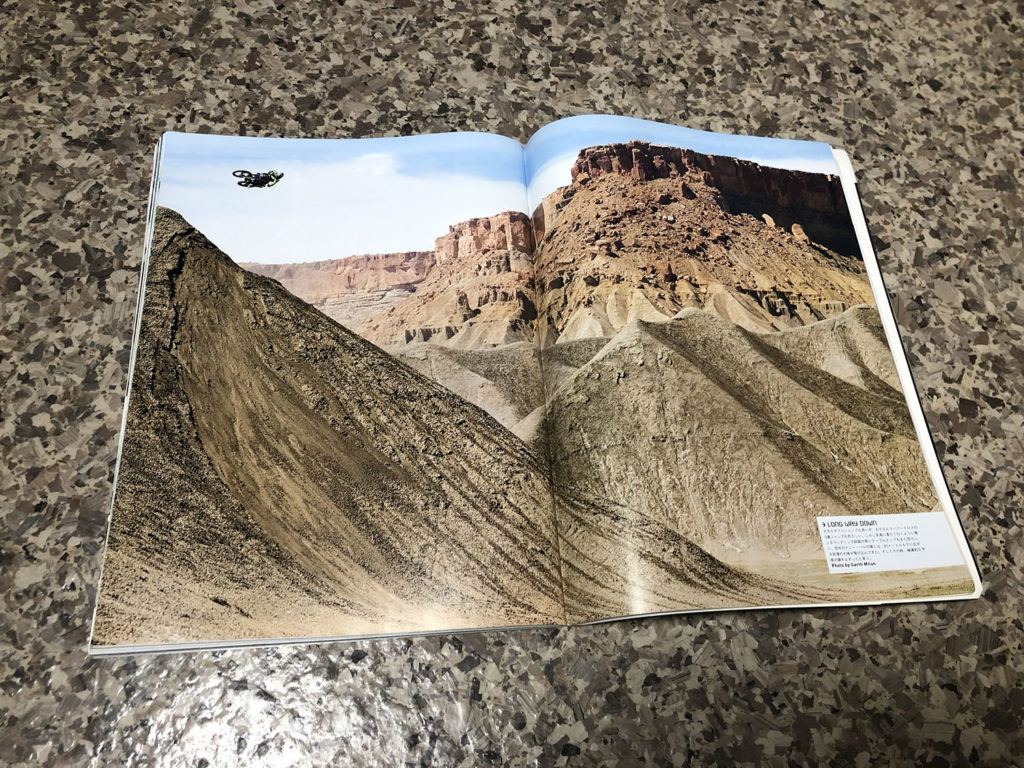 In the end, the magazine lasted only one year or so. Some of my friends in Japan told me that the editorial staff burst onto the scene with their chests puffed out because they were partners with the world’s best-selling MX magazine, and actually offended lots of potential advertisers and some of the racers. From what I understood, the edit staff was comprised of snowboarders, not guys who necessarily loved motocross themselves. The worst part about the TransWorld Motocross Japan venture was that as suspected, my friendship with the Dirt Cool guys seemed to be strained and to this day I don’t feel 100% comfortable when talking with them. And that sucks.

If the opportunity to launch Swapmoto Live Japan ever arises, you can bet I’ll pass… 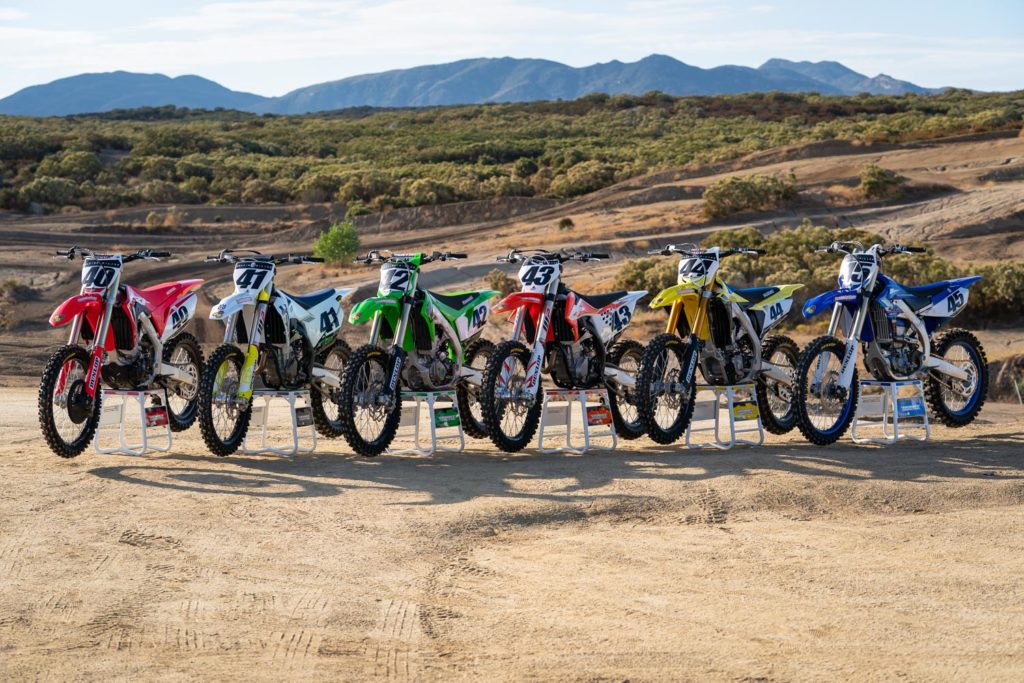 We just wrapped up our 2020 450 MX Shootout, and the guys at Backyard Design supplied us with custom numberplate backgrounds for all six of our machines. With four styles to choose from, there’s sure to be a design that you like…everything that BYD produces is super clean and factory looking.

One of the things we love most about the products that BYD produces is the ease in which they install on the bikes. Their proprietary vinyl and adhesive materials are super easy to lay down, without creases or bubbles. Furthermore, the BYD backgrounds and graphic kits can be peeled up and repositioned without leaving adhesive residue. The templates that they custom trace for each bike are also perfect, and even the trickiest sidepanels of the dual-muffler Honda CRF are easy to install.

For your Husqvarna and KTM owners; BYD already has the templates for the new vented airbox covers, too!

When it comes time to upgrade the look of your new or old bike, please give the guys at BYD a call…we promise that you’ll be stoked! 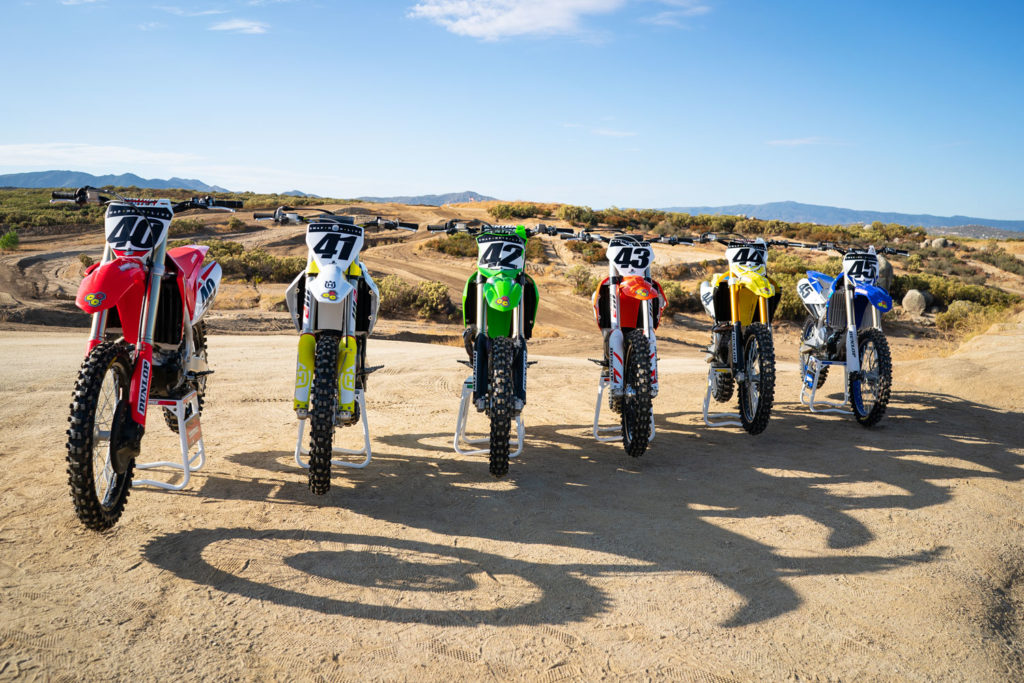 How to Install Dirt Bike Graphics