Presented by Fasthouse
The 2020 250 Shootout was an exciting event as we got to compare all six bikes – the Honda, Husqvarna, Kawasaki, KTM, Suzuki, and Yamaha, all back to back with support from manufacturer technicians to help us set up each of the machines to their fullest potential.
These days it seems more women than ever are riding motocross, so we thought it would be a great idea to conduct a separate shootout to showcase the feedback and opinions of a female rider/racer. Jaymie Hayjewski is a regular (at the front of the pack, we might add) at the Swapmoto Race Series, and she was the obvious choice for us to ask for a woman’s point of view. That said, we invited Jaymie to join us on our final day of comparison testing and evaluate each of the bikes from her point of view. Though she certainly rips, we figured that most of the bikes would be too stiff and too tall for her diminutive stature. Without further ago, we present our 2020 250 WMX Shootout! 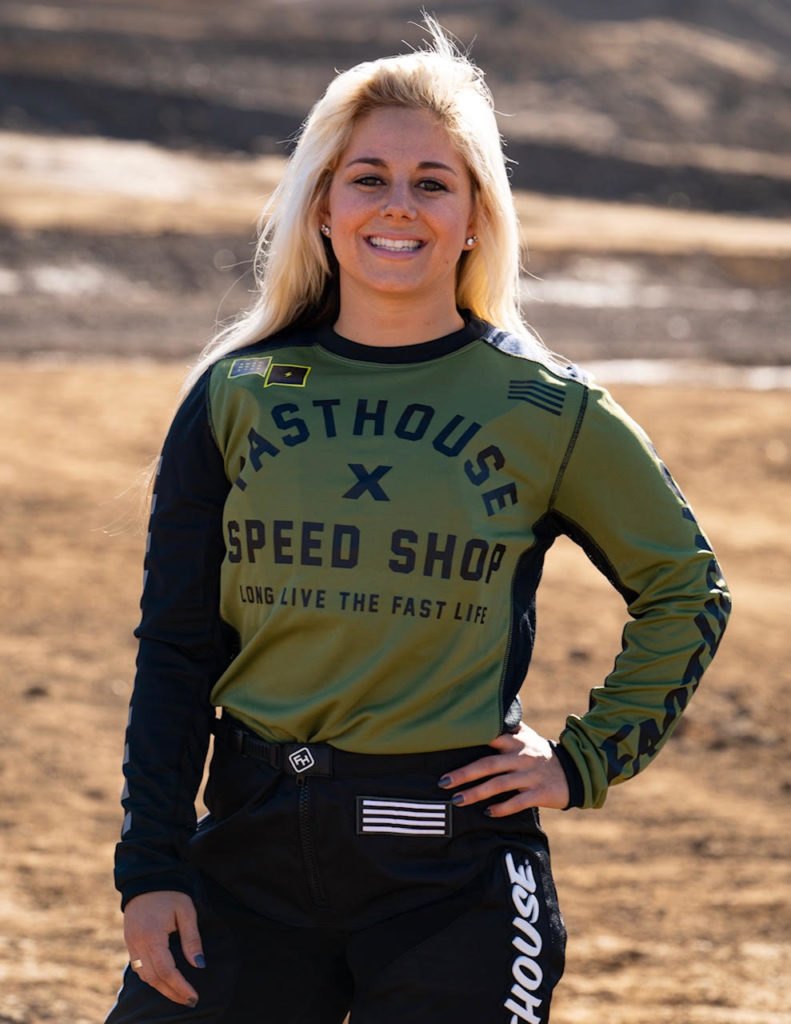 “I believe that all the bikes are amazing and all of them have so much to offer. I have been racing a 2014 Suzuki RM-Z250 for a few years now and I thought it was pretty good because it is set up for me, but it was really eye-opening to ride every one of the new 2020 bikes and see how they compared back to back.” 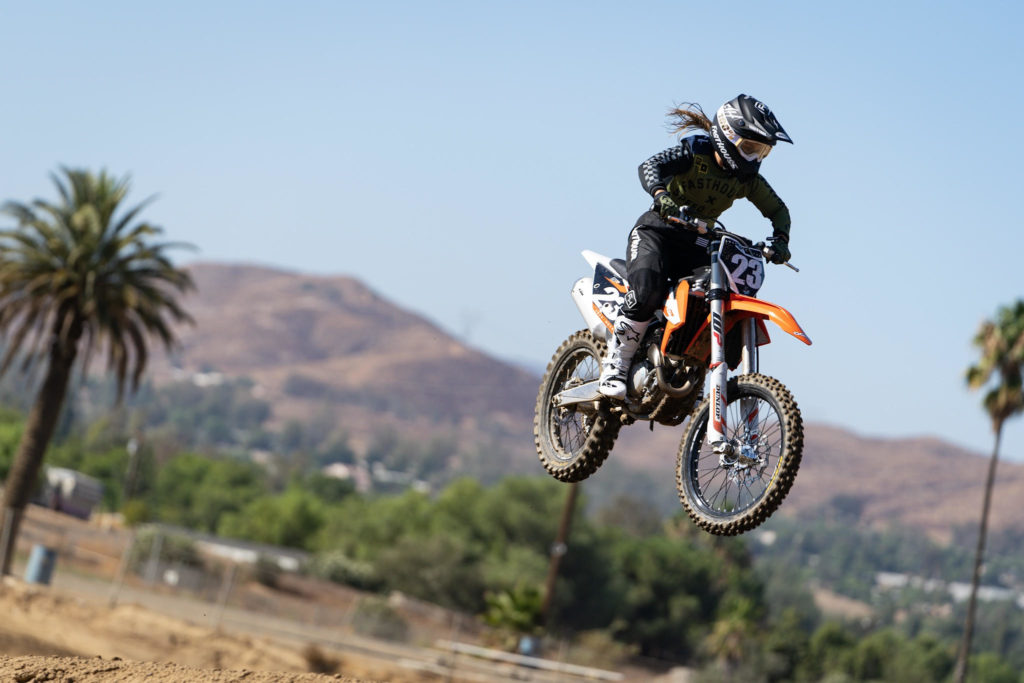 “The KTM 250 SX-F is my first pick and that really surprised me, to be honest. I just felt comfortable on it everywhere, from the air fork to the mapping and traction control settings, to the overall handling of the KTM. The power of the engine is amazing and it didn’t lack power anywhere. The two maps had distinctively different characteristics. Map 1 was very controllable and easy to ride, while Map 2 was more aggressive, had quicker response, and pulled further. The bike handled great for me as it was stable at speed, but cornered with epic precision. I liked everything about the bike as it everything and more for me. The jumping, cornering, braking, power in and out of corners…it was all perfect. The front fork was a little stiff for me but it was possible to dial them in because they were air. Easy!” 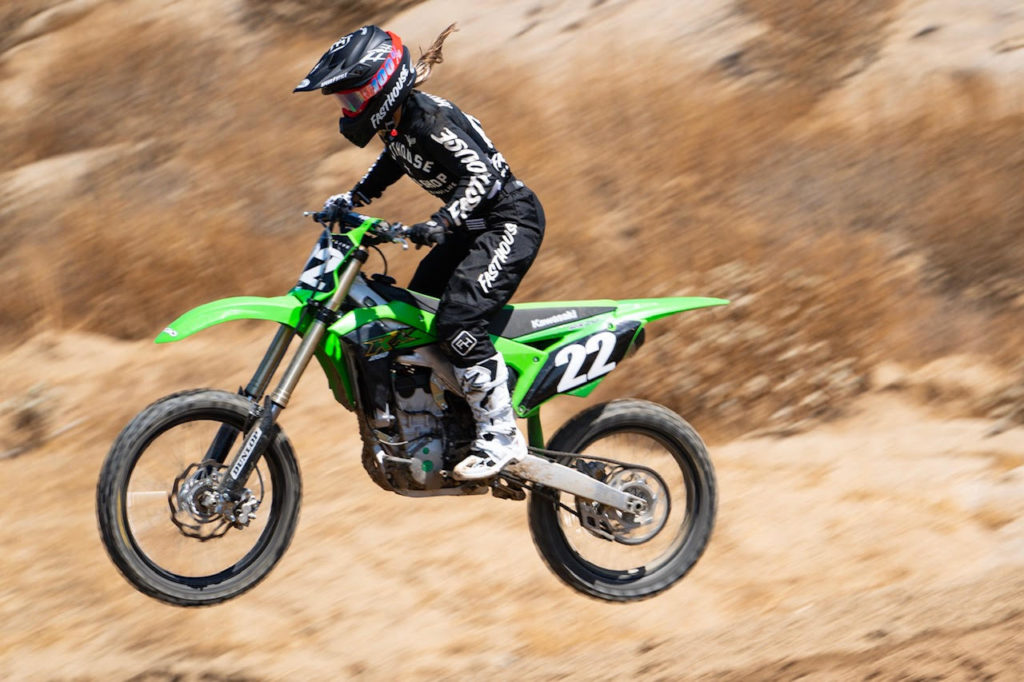 “The Kawasaki was a super-close second for me. My cornering was so on point when I was on the KX250, and I think the engine was very powerful. The engine’s strong point is mid-range to top-end and the thing pulls great out of corners. It’s kind of a bummer to kickstart the bike, but since I ride a kickstart bike anyway it was not that big of a deal. Only after riding the electric start bikes was it kind of a downer. I think the KX250 handles amazing for me. I felt comfortable on the bike right away. The bike is well balanced and it has good front-end traction in the corners. Bottom line: I really like the Kawasaki KX250 and the way it handles. I felt that I could throw it around easily, and the suspension was soft enough for me. I really enjoyed the way the Kawasaki feels when I ride it at 100% effort.” 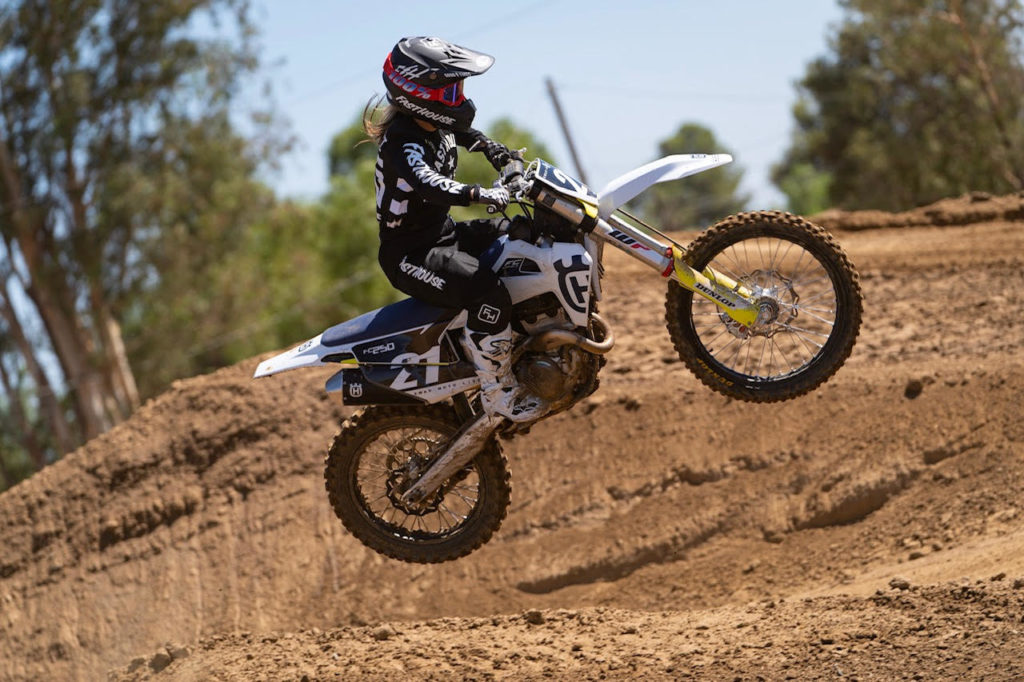 “I also really liked the Husqvarna FC 250 but I didn’t care for how soft the suspension felt. The fork and shock settings gave the bike a very different feel than the KTM. The engine felt strong all-around but it did bog a little for me coming out of tight corners. The engine revs out very nicely in each gear and you can just rev it out when needed. As far as handling and suspension, the bike is stable at speed and entering corners. The front end did feel a little loose and vague in the middle of the corners, and that’s what held the bike back for me. Also, the fork would smack down really hard landing from larger jumps. For some reason, it was also hard for me to get to the rear brake, even though I didn’t encounter that on the KTM.” 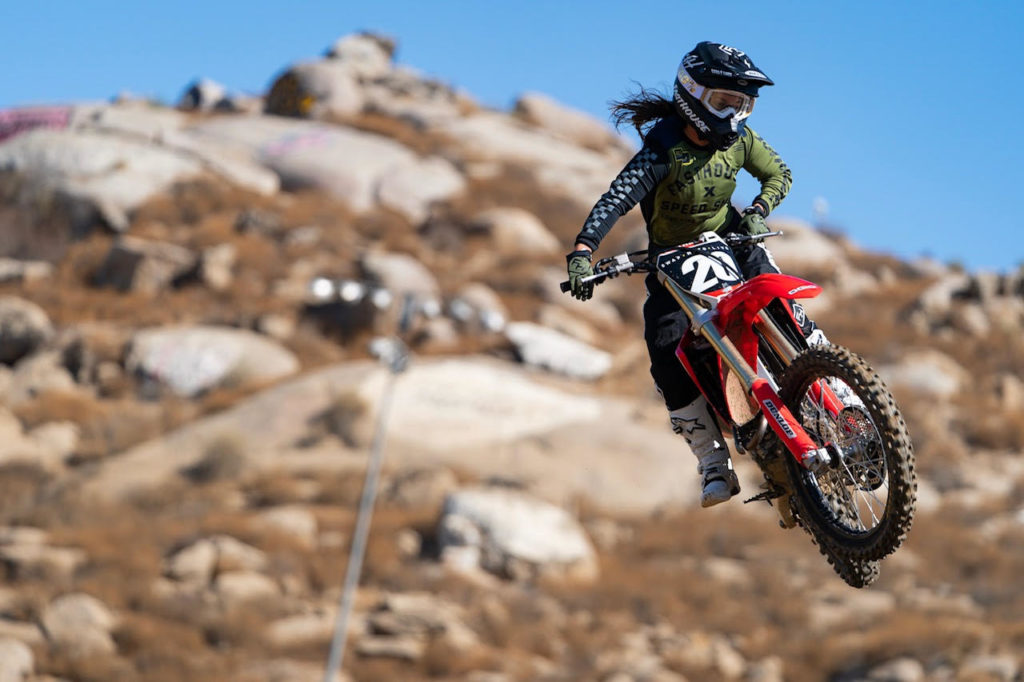 “I liked the Honda CRF250R a lot, bit for some reason I was unable to get the bike to corner the way I wanted it to. The engine is both mellow and aggressive. The three maps are great, but I like the third most aggressive map the best and that’s where I would probably leave it full time if I raced a Honda. The Honda handled amazingly well and I felt great juping it and throwing it around in the air. The cornering was a bit tough for me on the Honda, as I couldn’t really set up for inside lines on it. The bike is small and easy to throw around, but I would need to have the suspension modified for me so that it would settle a little bit better in the corners for me.” 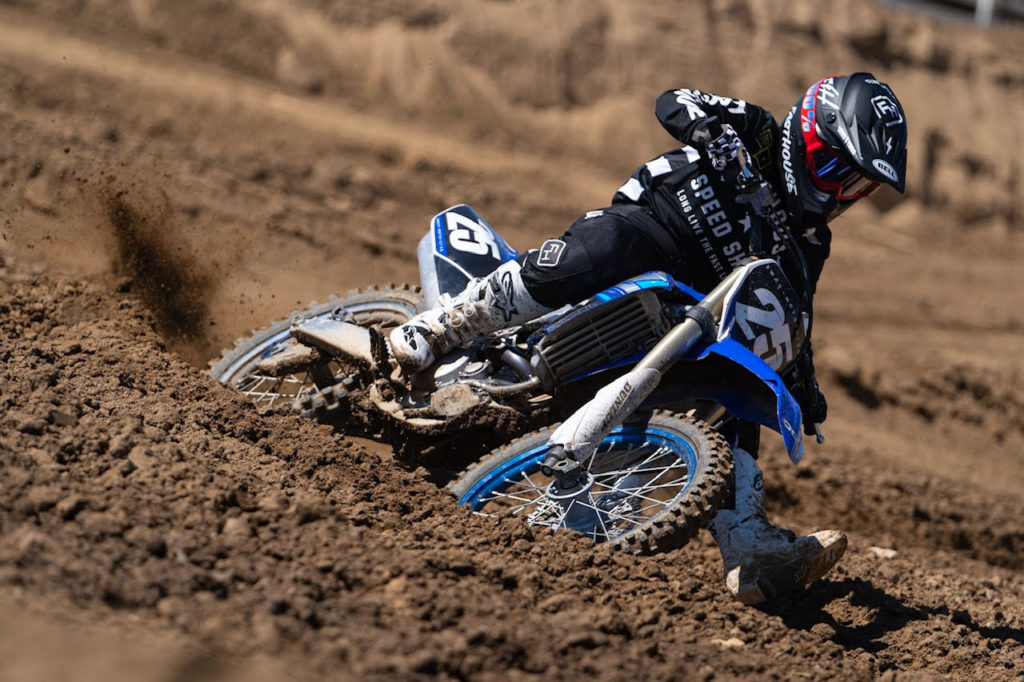 “The Yamaha YZ250F is my fifth pick. The engine is very powerful and it accelerated nicely out of the corners with a ton of low-end power. Of all the bikes, the Yamaha has the most versatility when it comes to fine-tuning the powerband, thanks to the Yamaha Power Tuner app for smartphones. As delivered, the bike has the most low-end and mid-range power, with plenty of run out on top. The bike handles great and the suspension is awesome, and I was able to get the bike to corner just fine. My only dislike about the Yamaha is the width of it between your legs, and especially when you scoot forward in the corners. The bike feels really big and wide in between my knees, and it was impossible for me to get used to. It would take me quite some time to grow familiar with the Yamaha’s feel.” 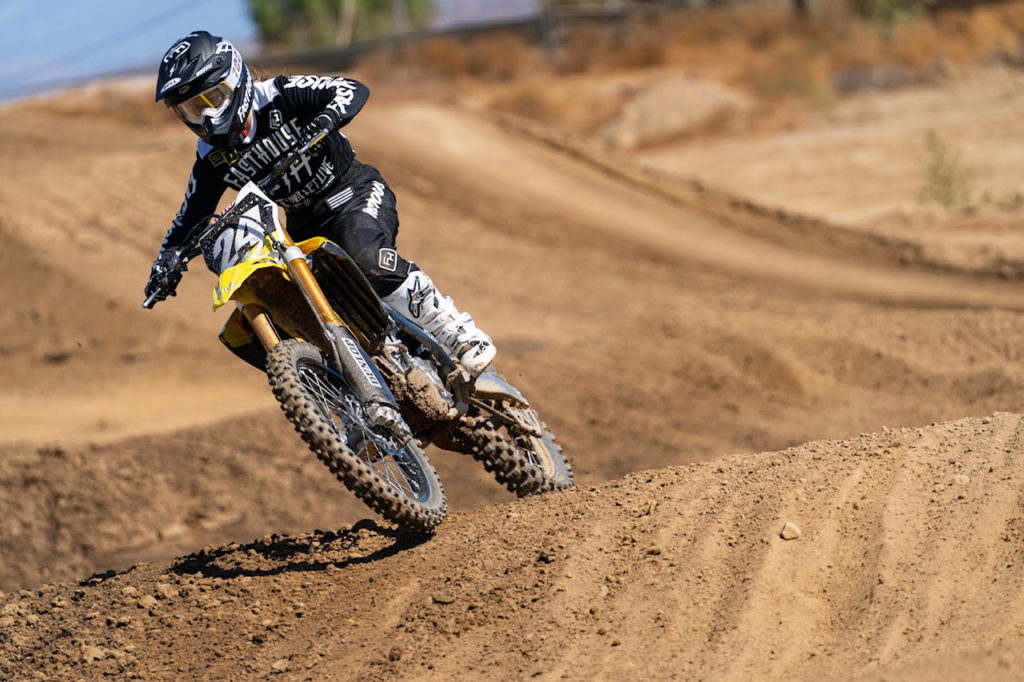 “The Suzuki didn’t feel that different from my 2014 bike to be honest. The engine is okay, but nothing in comparison to what the other five bikes have to offer. Top-end power is its strength, and the bike doesn’t have much low-end torque. The bike handles fairly well too, but everything about the Suzuki just feels basic. Standard; no frills. The suspension is ridiculously stiff. While I could ride all of the other bikes well with stock suspension, the Suzuki was super stiff and downright uncomfortable when landing. Still, it is a great bike and it rides and handles well, it just seems basic with nothing special in my eyes compared to the others.”