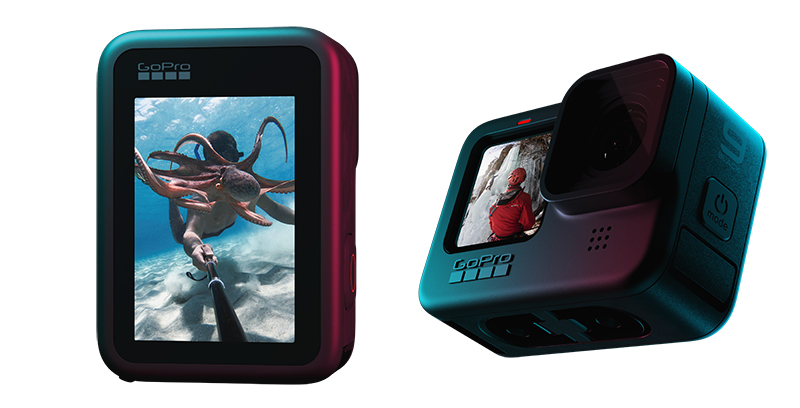 It’s always a big deal when GoPro announces a new camera. The California company is known for revolutionizing the point of view perspective with the HERO line and the latest release in the long-running line, the HERO9 Black, is for sure one of the most advanced action cameras ever. We know that some people were a bit overwhelmed by the seemingly endless line of new technology and offerings from GoPro, but seriously, the features and functions of their latest model will have you thinking about an upgrade. Especially when you see the price…

Impressive, huh? With those features, the HERO9 has furthered GoPro’s efforts to be an all-in-one piece of technology and has addressed some of the issues that users have experienced in the past, particularly battery life and usability in adverse conditions. Let’s dive into some of the key things that stood out to us…

Image quality is always the number-one selling point of any camera, especially as televisions/computers/phone producers improve their displays and content-sharing platforms like GoPro or Instagram develop their systems to play it back. The 5K resolution is very impressive and should be the “standard” for years to come, even if some of us are still okay with 1080, which is a setting offered by the HERO9.

The video capabilities are what most think of when it comes to the GoPro cameras, but the still photo specs are equally as impressive, especially with the new 20-megapixel quality and option for RAW files.

If photos are what you’re after, there are just as many options to choose from, including SuperPhoto and HDR, continuous shooting, night modes, self-timing, plus Wide, Linear, Narrow digital lenses. And while we’re on the self-timing, you can now schedule your camera to begin and end shooting at certain times. Yes, “Set it and forget it!”

If you’re using a GoPro, odds are that you’re doing something active. Maybe it’s putting in laps at the track, descents down the mountain bike trail, or even a simple walk. No matter the activity, the footage you capture will be steady and clear thanks to the Hypersmooth 3.0 internal stabilization, which makes even the bumpiest clips seem like they were filmed with an expensive, professional-quality gimbal. GoPro took that one step further by allowing users to activate an automatic horizon-leveling feature, which will help the background match the environment while the footage retains the angles of the action.

Timelapses always reveal an interesting look at the world around us and the new TimeWarp 3.0 feature offers users even more control because they can speed up or slow down the way life is captured through the Real Speed and Half Speed settings.

You have to see what you’re shooting and that’s easier than ever before thanks to the two LCD screens, front and back, that have been built into the camera. The rear screen is a 2.27” rear touch display with touch zoom while the front screen is a 1.4” color display that shows a live preview and status modes. All of the camera’s controls can be done through these screens, while it is also able to react to multiple voice commands in 11 different languages and six accents.

Sure, it’s great to share your footage after the fun ends, but with the HERO9, you can now broadcast whatever you’re doing to the masses as it happens. Once you connect your camera to the Internet, you’ll be able to stream the Hypersmooth footage in 1080 quality to your preferred platform.

The durability of the GoPro has come a long way, evident in the 33-foot waterproofing and a replaceable outer lens that has made the old plastic case obsolete, but the HERO9 has some other new features that make it more usable than ever. At the bottom of the camera are two fold-down fingers, which allow the camera to be attached to a variety of mounts, including the trademark stick-on holder, the Chesty harness, and the new accessories like the Media Mod (a case that includes a built-in directional mic with wind-suppression, 3.5mm mic port, HDMI-out, two cold-shoe mounts), the Display Mod (a flip-up screen that lets you see yourself in action), the Light Mod (an LED light that can cast up to 200 lumens and is waterproof to 33 feet), and the Max Lens Mod (an ultra-wide 155˚ FOV digital lens).

Cameras are an important part of our job and we’ve spent thousands of dollars on the different bodies, lenses, flashes, lights, and microphones we take with us to every race or ride day. That sort of investment means that you have to be careful with what you do and where you go, as there are places you’d never want to put your “pro gear” due to the of risk of damage.

Now, we’re not saying that the HERO9 has totally replaced our Sony setups, but some of the features and specs make it the best option for certain tasks. With this one HERO9 and some of the Mods, we could stick it on a rider for a moto, pull it off, maybe pop in a new battery (the new replaceable-rechargable unit boasts a 33-percent longer runtime that the old cell), mount into the Media Mod, and do a full interview with the rider. We’re not doing that with our A9.

The all-new GoPro HERO9 is now available at gopro.com and at different retailers, with a price that depends on if you take part in the GoPro service. If you decide to enroll in the annual subscription, you’ll be offered a camera replacement in case of a catastrophe, unlimited cloud storage of files, up to a 50-percent discount on certain accessories, and a price savings of $100 on the camera itself. Altogether, the price for the subscription and camera is $349.98, which is much cheaper than buying the camera on its own, which has an MSRP of $449.99.

Checking in With Malcolm Stewart

2021 MXGP Of Trentino-Italy | GoPro Onboard