For 2021, the Kawasaki KX250 is all new and this marks the second time in two years that the green machine has boasted substantial updates. While last year’s 2020 model was vastly improved with a new powerplant featuring the road-race inspired finger-follower valve train in the cylinder head and Kayaba mechanical spring forks, it will go down in history as the in-between bike as the ’21 bike now boasts a new chassis, bodywork, electric start, hydraulic clutch, and a handful of engine updates that make the KX250 the most exciting new bike of the year in the 250 class. We caught up with Kawasaki’s Ken Essex at Perris Raceway to get the lowdown on all of the changes and what they mean. 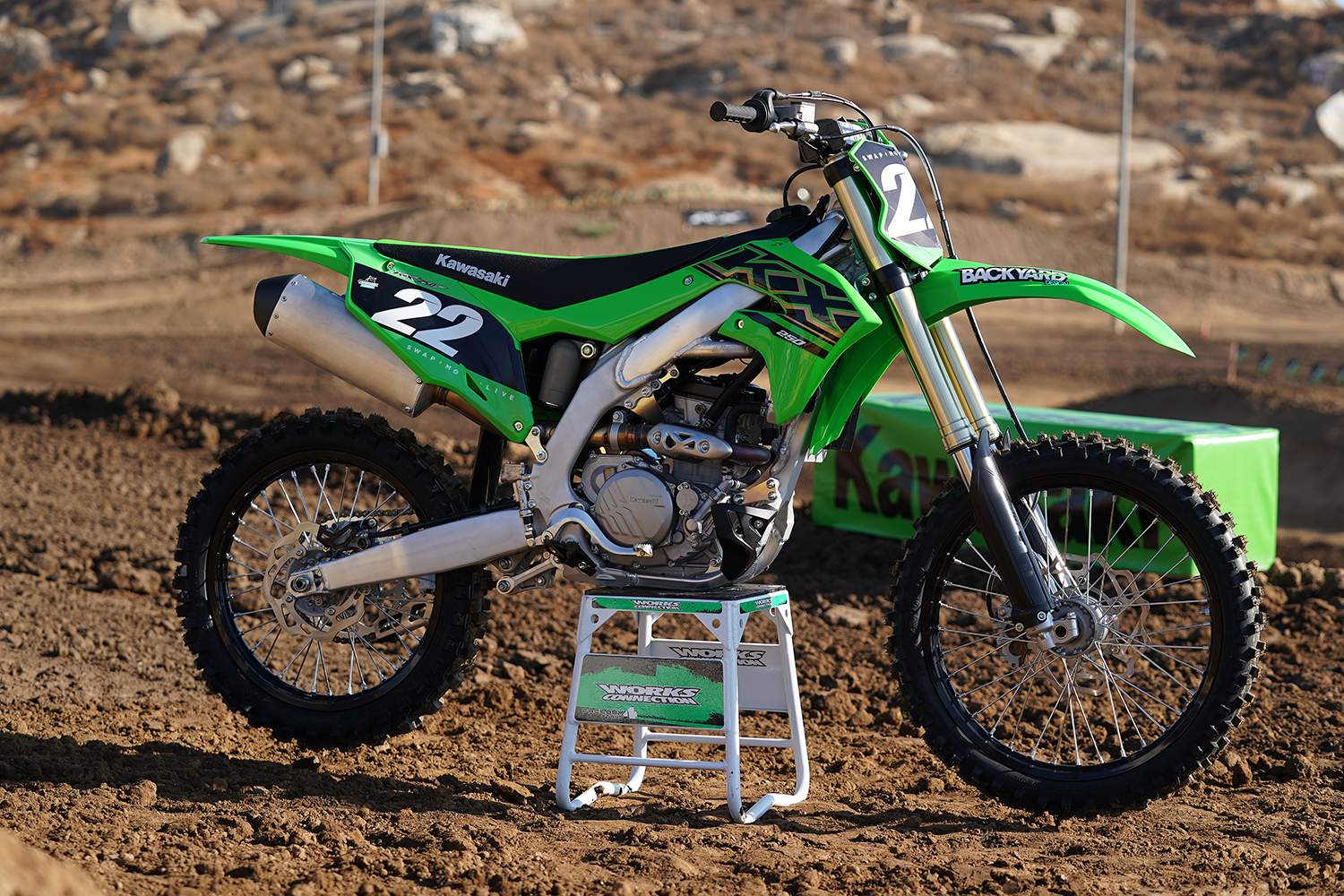 Visually, the new KX250 now looks nearly identical to.its bigger brother, the KX450, as it adopts the same chassis, swingarm, bodywork, hydraulic clutch, and electric starter. Plastic bodywork is interchangeable between the two machines. We are already huge fans of the 450’s chassis and ergonomics, so the conversion on the 250 is a much-welcomed update. 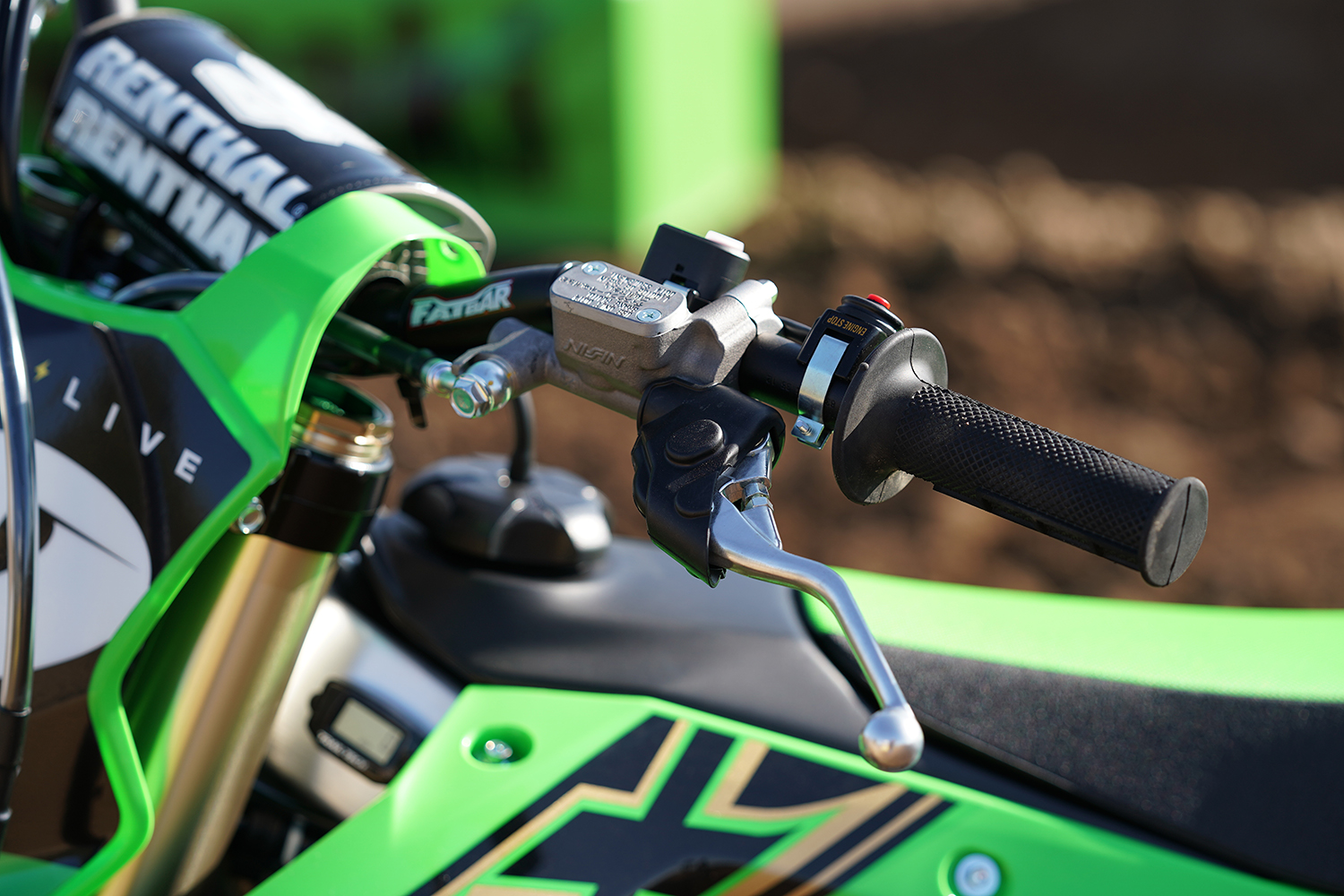 Nissin supplies the hydraulic clutch system on both KX models.

The hydraulic clutch system is paired with the same new coned-disc spring clutch assembly for better power transfer and a consistent feel at the lever. We love the assembly on the KX450 as it boost bow-end roll-on power by eliminating clutch slip. The system should do the same for the KX250. Internally, much of the KX250’s engine has been updated. New intake and exhaust port shapes and revised cam timing are claimed to boost power over last year’s powerplant and add 350 rpm to the engine’s usable range of power. Heavier valve springs handle the greater rpm, and a longer connecting rod round out the engine updates. Oh, and we can’t forget the electric start! 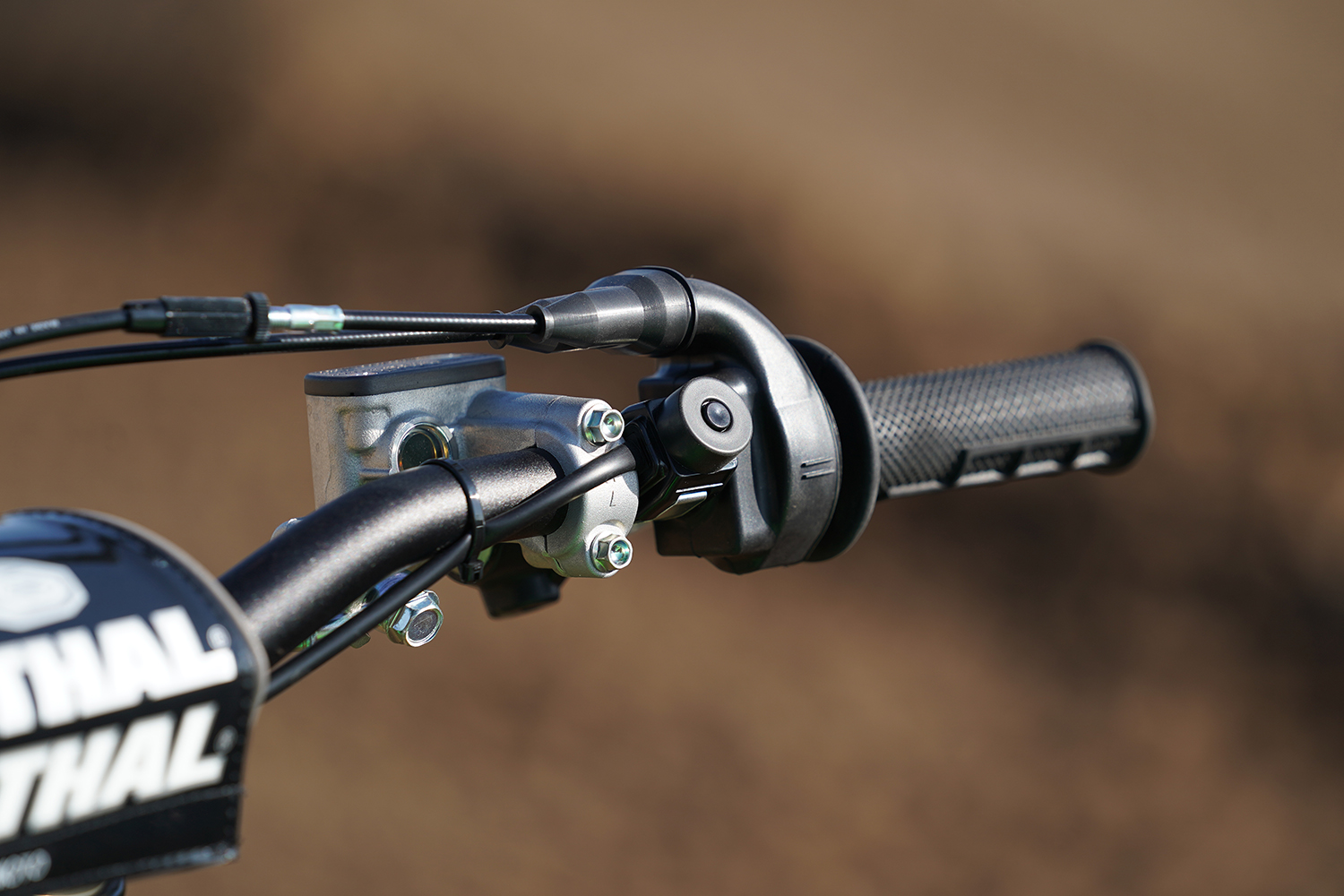 They should have made the e-start button gold to match the engine plugs, too!

Kawasaki has long had the most adjustable ergonomics in off-road with four handlebar positions and two footpeg settings. Making the KX’s ergos and control panel even better this year are the addition of Renthal Fatbars. The new bend is comfortable and the bar is structurally stronger while offering better vibration dampening and a more-precise feel. 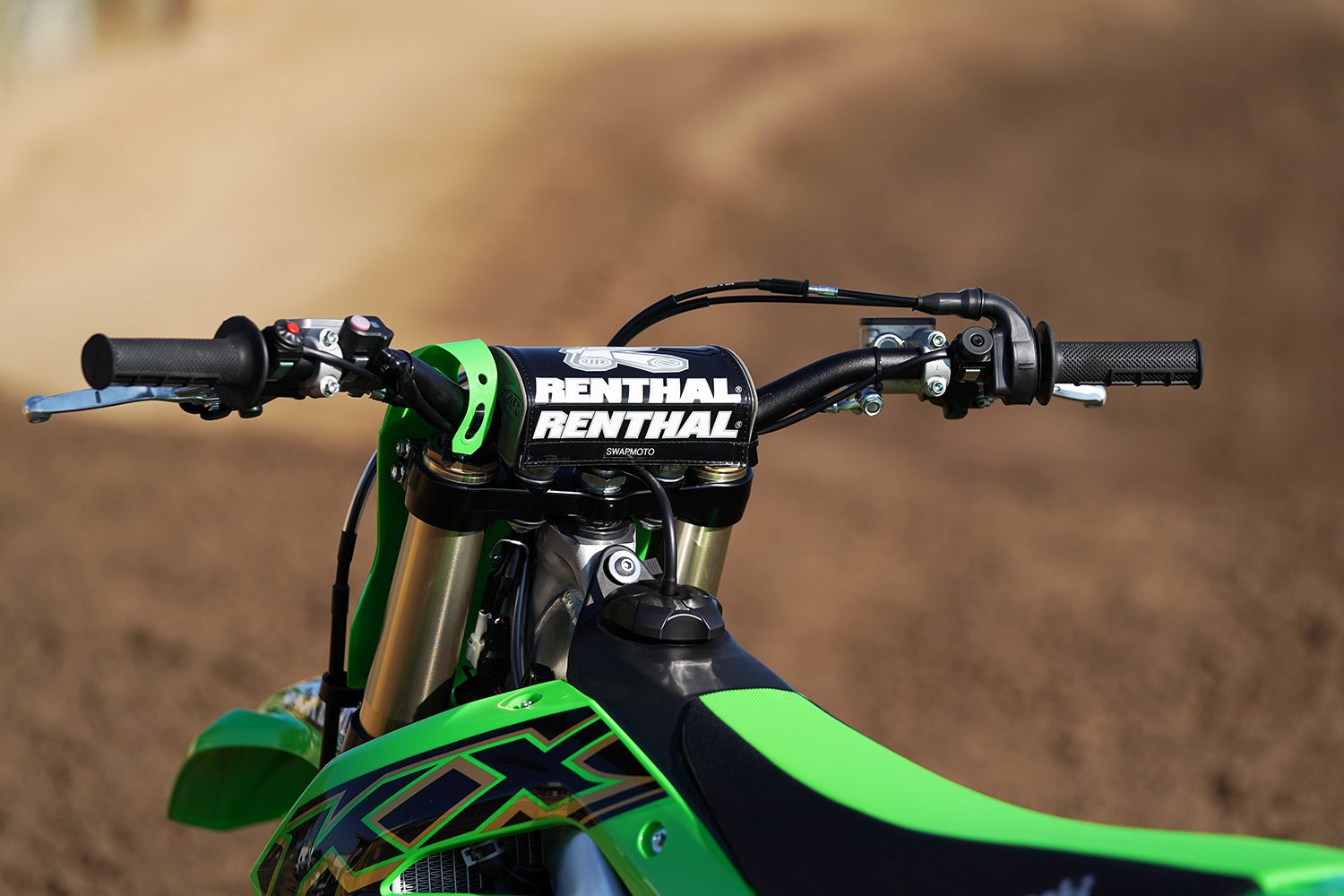 Both ends of the KYB suspension have been reworked to better match the new chassis, and we were surprised to hear that the fork spring rate has been lightened for a more precise feel. A new lower triple clamp is lighter and offers more flex for a balanced ride, and shock linkage ratios have also been revised to give the bike exceptional balance. 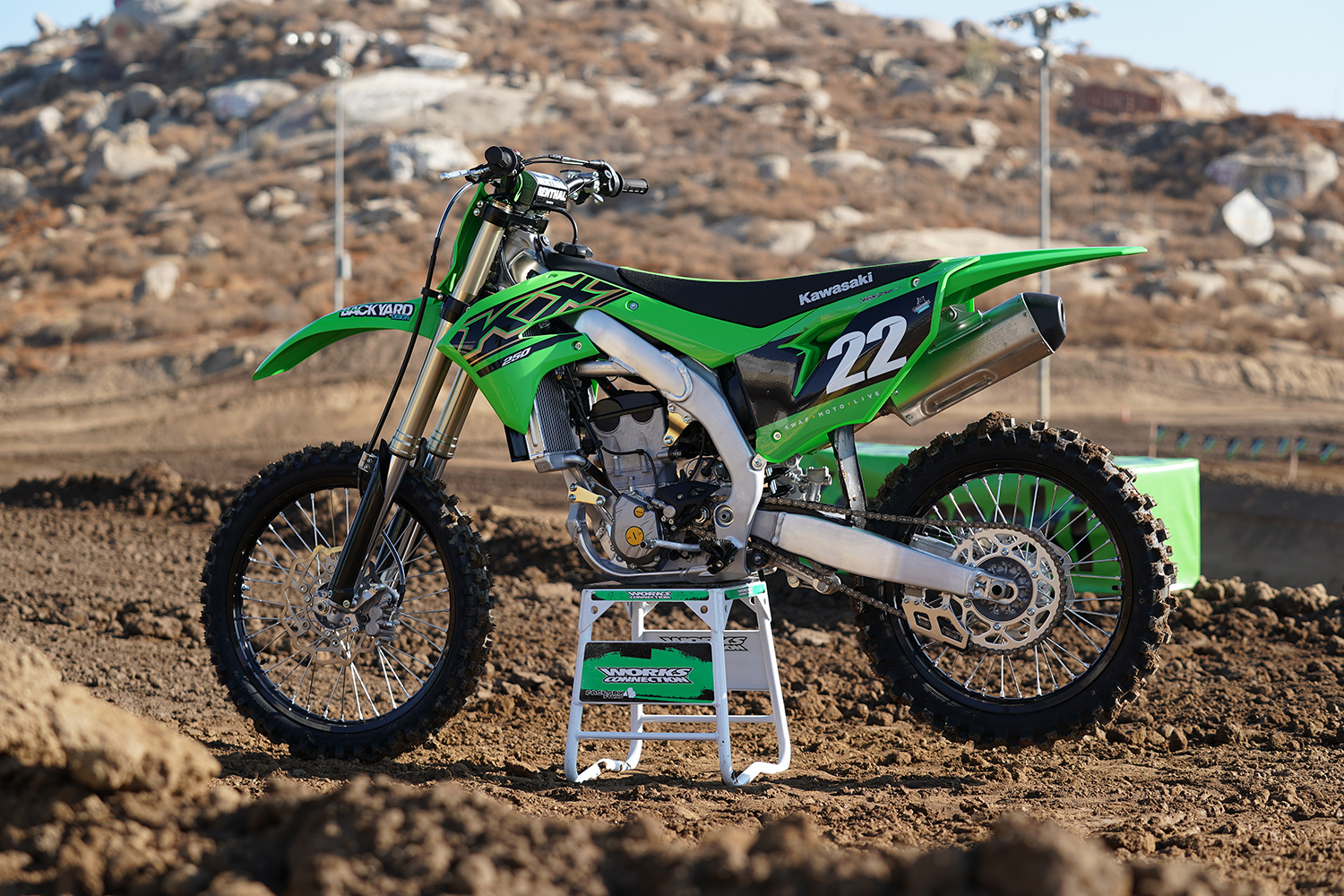 We’ve spent a couple of days riding the 2021 KX250 and you can catch our first impressions of the green machine Thursday at 8:00 am!